Past, Present and Future of the Milwaukee Art Museum

The Milwaukee Art Museum is a historic facility undergoing extensive renovations this fall, so here’s a look at its history, what your group should go see now and what you’ll be able to see during the renovations.

Instead of a skyscraper, a 90-ton pair of steel wings is the star of the lakefront skyline in Milwaukee, Wisconsin. 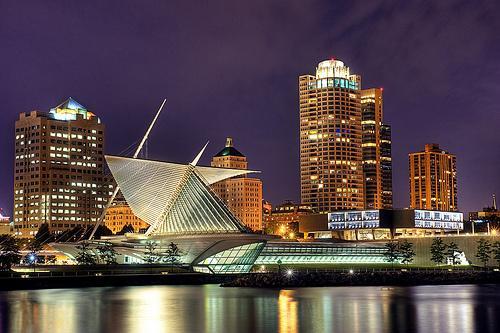 A nighttime view of the skyline of Milwaukee, Wisconsin and the Burke Brise Soleil that steals the show. Image courtesy of Milwaukee Art Museum. Photography by MJZ.

The Milwaukee Art Museum is a 341,000-square-foot facility along the shore of Lake Michigan that is most recognizable by its Burke Brise Soleil, a wing-like structure that sits atop the museum’s Quadracci Pavilion. Designed by Spanish architect Santiago Calatrava, the pavilion is renowned for its striking post-modern style and will be the only part of the museum to remain open during its upcoming fall renovations.

While structural renovations to the museum’s Milwaukee County War Memorial Center and Kahler Building are scheduled to begin September 2014, new exhibits are scheduled to go on display in the Quadracci Pavilion. So, what pieces should you see before the collection goes off-view, and what can you expect to see this fall in the new exhibits? Here’s the ultimate must-see list for your group’s next visit to the museum, whether it’s this summer, fall, winter or spring.

The Milwaukee Art Association opened its collection to public view at the War Memorial Center in 1957, and it hasn’t stopped growing since.

The Milwaukee Art Institute, as it is now known, has been collecting pieces of art for 125 years, and during that period, the Milwaukee Art Museum expanded into a three-building complex. Finnish-American architect Eero Saarinen’s War Memorial Center was opened in 1957, and 18 years later, architect David Kahler finished the Kahler Building. The museum’s pride and joy, Calatrava’s Quadracci Pavilion, was added in 2001 to complete the museum that now sees 400,000 visitors a year. 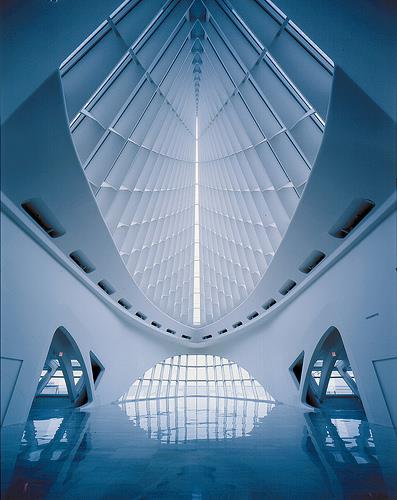 The interior of the Quadracci Pavilion, which will remain open during the museum renovations. Image courtesy of Milwaukee Art Museum. Photography by Timothy Hursley.

What to See Right Now

Currently, the Milwaukee Art Museum is ranked #2 out of 88 best attractions in Milwaukee on TripAdvisor. Home to a permanent collection of over 30,000 works of art among its three exhibition buildings and archives, its popularity has forced the foundation to expand its facility and begin updating. With the renovations beginning this fall, many crowd favorites are starting to be taken down now. These are the exhibits and pieces that you and your group should see before the whole collection is off-view for 12 months.

As one of the museum’s self-proclaimed strong suits, no visit to the Milwaukee Art Museum is complete without a look at some of the most renowned artistic achievements of the 20th century.  Here are the two most popular pieces (according to a visitor poll) from this period that are currently on view: 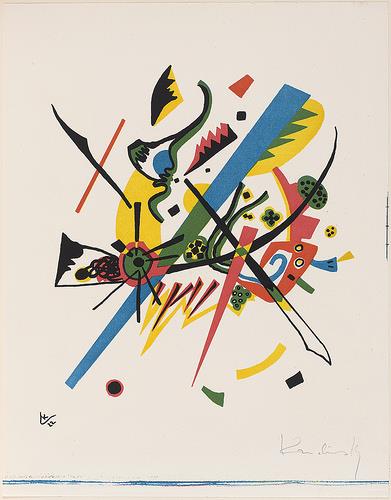 This temporary exhibit, open until Sept. 1, 2014, showcases the work of Wassily Kandinsky, who is considered one of the most important Modern artists of all time. In a partnership with the Centre Pompidou in Paris, the works on display come from their collection as well as the Mrs. Harry Lynde Bradley Collection at the Milwaukee Art Museum.

A man of many trades, Kandinsky is known by some as the first abstract painter, but was also a renowned theorist. This exhibit follows the non-representational artist’s journey through the first half of the 20th century, a time of great innovation in the world of art.

*The Bradley Collection, the museum’s world-famous collection of modern art, will be on display until Oct. 14, 2014, and the exhibit Postcards from America: Milwaukee, depicting subjects ranging from the Wisconsin State Fair to women laborers, will be open until Oct. 19, 2014.

What to See During the Renovations

For 12 months, the 140,000-square-foot Quadracci Pavilion will be the only part of the museum that remains open, and this includes the Baumgartner and Schroeder Gallerias. With 10,000 feet of exhibition space, these areas will continue to host events and popular community programs such as the MAM After Dark gallery talk series, but new works of art will also be on display. Here’s a look at some of the exciting exhibits that will be coming to the Milwaukee Art Museum during its renovation.

This exhibit will showcase work from some of the world’s most renowned  European artists.  Giovanni Bellini, Salvator Rosa and Sandro Botticelli are  just a few of the famous names with pieces on display.

Made possible by the American Federation of Arts, the collection is split  into five chronological sections. The exhibit will explore the thematic and  stylistic developments in Italian art, from the religious theme of the late Middle Ages and Renaissance to the 19th century’s secular neoclassical and  genre paintings. 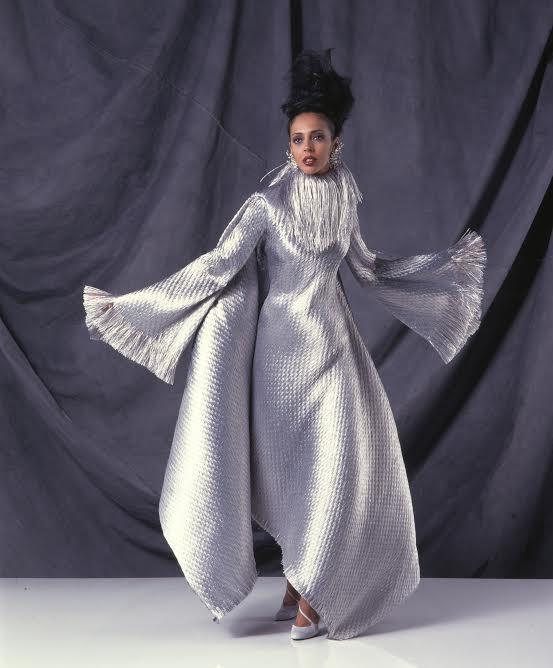 One of many gowns that will soon by on display. Givenchy by Alexander McQueen (France), Evening dress, haute couture, fall/winter 1997-98. Synthetic raffia mounted on silk gauze. Appeared in The Jazz Age of Fashions. Photo courtesy of Johnson Publishing Company, LLC.

This exhibit is the first ever to be dedicated to the subject of the Ebony Fashion Fair, a charity fashion show that reinvented the perceptions of beauty, style and empowerment for African Americans. A walk through this exhibit is like a walk down a timeline recreated as a runway. Through nearly 100 artifacts such as ensembles and accessories, visitors learn about the 50 years of history behind the traveling show and its director and producer, Eunice W. Johnson.

Johnson is responsible for a collection of thousands of ensembles in the past five decades, and 40 of the most impressive garments were chosen to go on display. World-renowned designers such as Christian Dior, Yves Saint Laurent and Givenchy are behind the fashion feats being showcased.

The Milwaukee Art Museum will be taken over by some of history’s biggest names in art during the summer of 2015. Masters such as Edgar Degas, Vincent Van Gogh, Pablo Picasso, Georgia O’Keeffe and Salvador Dali will all be represented by some of their most prominent pieces, on loan from Buffalo’s Albright-Knox Museum. 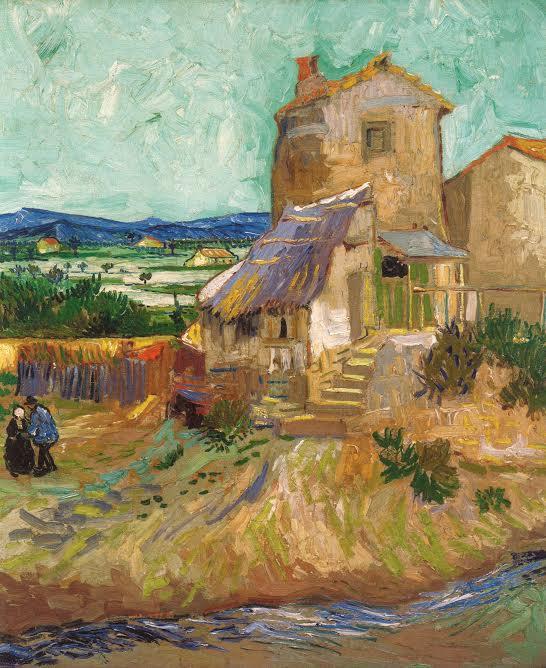 Steps to Planning Your Group Visit 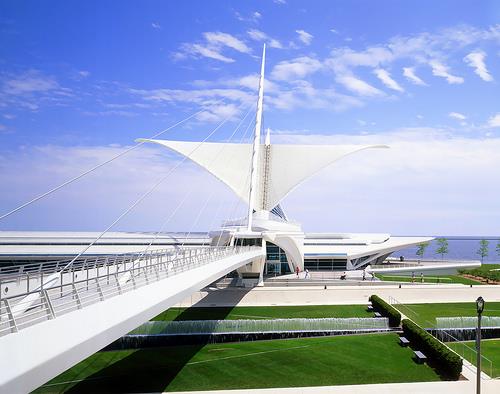 The exterior of the Quadracci Pavilion. Image courtesy of Milwaukee Art Museum. Photography by Jeff Millies.

Regardless of when your group wishes to visit the Milwaukee Art Museum, you will find plenty of ways to tour its enviable assortment of some of the world’s finest art.