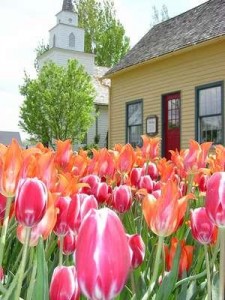 Pella basks in glory when the tulips come out in mid-April and the Tulip Time Festival celebrates local Dutch traditions the first weekend in May. But the Central Iowa town of 10,000, located 53 miles southeast of Des Moines, is a delightful destination year round.

For groups that can’t spare the time or expense of going to Holland, Pella—with its Dutch attractions and shops—is almost as good as the real thing. The town carefully preserves its heritage and fairy-tale feel, and everything of tourist interest is clustered right downtown. You’ll find gabled, red-brick buildings, shops that sell wooden shoes, a canal and even a windmill.

I’m drawn to bakeries wherever I go, so my favorite spot in Pella is Jaarsma Bakery. Like a kid in a candy store, I go nuts scooping up cinnamon rolls, bismarks, windmill cookies, almond tarts, coffee cakes, and buttery, cream-filled puff pillows. The bakery is famous for its Dutch letters, a flaky “S”-shaped pastry with almond paste filling. Also a gift shop, it sells Dutch imports, from chocolate and cocoa to Delftware and lace.

A few doors away, Ulrich’s Meat Market, dating back to 1868, makes Pella ring bologna from Old World recipes. Seasoned with spices, the smoked and cured tube is shaped like a horseshoe. I like the cheddar variety. Ulrich’s also has Dutch and locally made gouda and other cheeses, plus beef sticks, beef jerky, summer sausage, thinly sliced dried beef, smoked pork chops and bologna steaks. Across the Dutch-style town square stands In’t Veld’s Meat Market, another Pella institution.

Besides food items, shoppers exploring the brick-accented sidewalks of downtown Pella find other treasures, from antiques and collectibles to home decor items and women’s accessories.

Steps away from the shops is Pella Historical Village, a collection of 20-plus buildings, some of them transplanted from other locations. A row house original to the site was the boyhood home of Wyatt Earp, the Wild West lawman. Also see a gristmill, blacksmith shop, bakery, church, sod house and log cabin. Some of the historic and replica buildings house furnishings, art and other artifacts that belonged to early Dutch settlers. One room has memorabilia from past Tulip Time celebrations. Craft demonstrations during Tulip Time and September’s Fall Festival include wooden shoe making, yoke carving, Dutch letter baking, needlework, spinning and rug braiding. 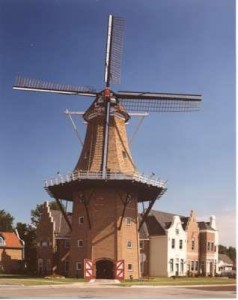 Visitors to Pella Historical Village also can tour Vermeer Windmill, the tallest working windmill in the U.S. The upper section was built in the Netherlands by a fourth-generation windmill maker and reassembled on site by Dutch craftsmen in 2002. The mill’s stone-ground flour, used by local bakeries to make bread, is sold in the gift shop. And don’t miss the second floor’s Miniature Dutch Village, a scale model of buildings in a Netherlands fishing village, complete with furnished rooms and shop interiors and dolls in period costumes. 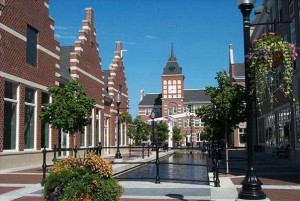 Another crowd-pleaser in downtown Pella is the Klokkenspel musical clock. Mechanical figures, like Dutch street scrubbers and Wyatt Earp, perform several times a day to the music of a 147-bell, computer-driven carillon. Delft tile scenes decorate the walls of the adjacent buildings. Nearby is the Molengracht Canal, a pedestrian plaza with brick walks and gabled buildings reminiscent of the Netherlands. The Royal Amsterdam, a three-story hotel built in Old World style, resembles an 18th century Dutch palace. Just across the canal are a tri-plex movie theater and Pella Windows & Doors showroom.

The Pella Opera House, built in 1900 and restored to its former glory in the 1980s, can arrange group tours with a demonstration of its 1928 Barton theater organ. It hosts a variety of shows, including organ concerts and touring musicals. During Tulip Time, the Opera House offers tours, concerts, a play on the founding of Pella and films with audience participation. This year’s films were The Sound of Music and Oklahoma.

Tulip Time crowds also can take in the Grandstand show that begins 90 minutes before the afternoon parade on Thursday, Friday and Saturday. The show features Dutch dancing and singing, street scrubbing, a Dutch costume show (Parade of Provinces), cheese market demonstration and presentation of the festival queen and her court. A lighted evening parade is offered on the same days. Other Tulip Time events include crafts markets, an antique auto display,  a tractor rodeo and quilt show. The 79th annual Tulip Time Festival is set for May 1-3, 2014.