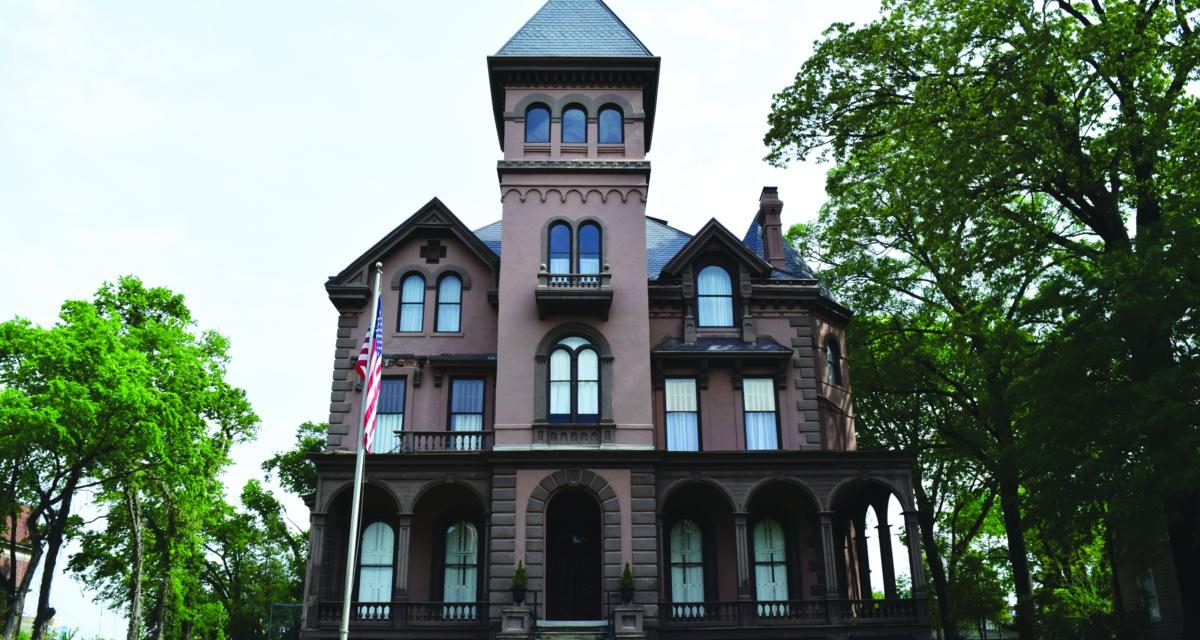 Across the Volunteer State in metro and rural areas, mansions and humble homes tell the state’s remarkable story

Some Tennessee historic homes served as headquarters for both Union and Confederate armies. Others became battlefield hospitals during the American Civil War. Others pay tribute to Tennessee’s two presidents of the United States while others reflect Tennessee’s role in our country’s growth. Here are seven that are sure to enhance any itinerary.

Since 1852, the Mallory-Neely House has been part of Memphis’ “Millionaire’s Row.” Closed for seven years, the home reopened in 2013. The 25-room home is the only historic property in Memphis to retain most of its original furnishings. Stained glass windows from the 1893 Chicago World’s Fair and hand-painted ceilings and parquet flooring accent the home. The double parlor on the first floor is lavish, while the second floor showcases family photographs and daughter Francis Mallory Morgan’s art and sculpture.

Tours include information about the families who built the house and those who enlarged and furnished the home. Group rates are available.
memphismuseums.org/historichouses/about/mallory-neely-house 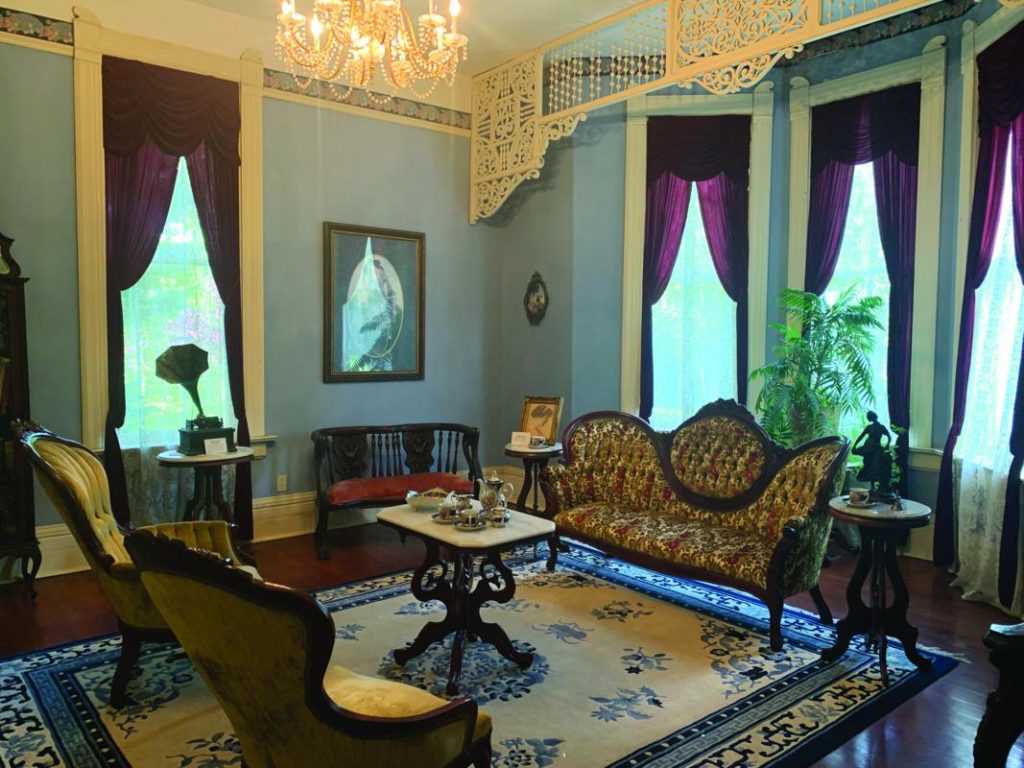 Sitting in the center of the Nashville-Knoxville-Chattanooga triangle, you’ll find McMinnville, Tennessee and Falcon Rest Mansion & Gardens. In 1896, Clay Faulkner gave his wife Mary an offer she couldn’t resist. He promised to build her “the grandest mansion in Tennessee” if she’d move to McMinnville, where his woolen mill was located. Mary said yes. The mansion’s history has taken some turns, but for the past 25 years, they’ve been welcoming tour groups with delicious food and fun entertainment.

Interactive shows that make stars of the people are available at lunchtime or dinner.

The original show “Murder at the Mansion” is set in 1897 and involves the visitors as real people. They are at the mansion to celebrate the opening of Clay and Mary Faulkner’s new home, but something goes wrong. In “Ghosts at the Mansion” guests become ghosts of previously living people. It promises more laughter than fright. Based on 1863 McMinnville history, “The Honeymoon Ball of General John Hunt Morgan” requires everyone in the audience to assume a role, including
Morgan’s 21-year-old bride. falconrest.com 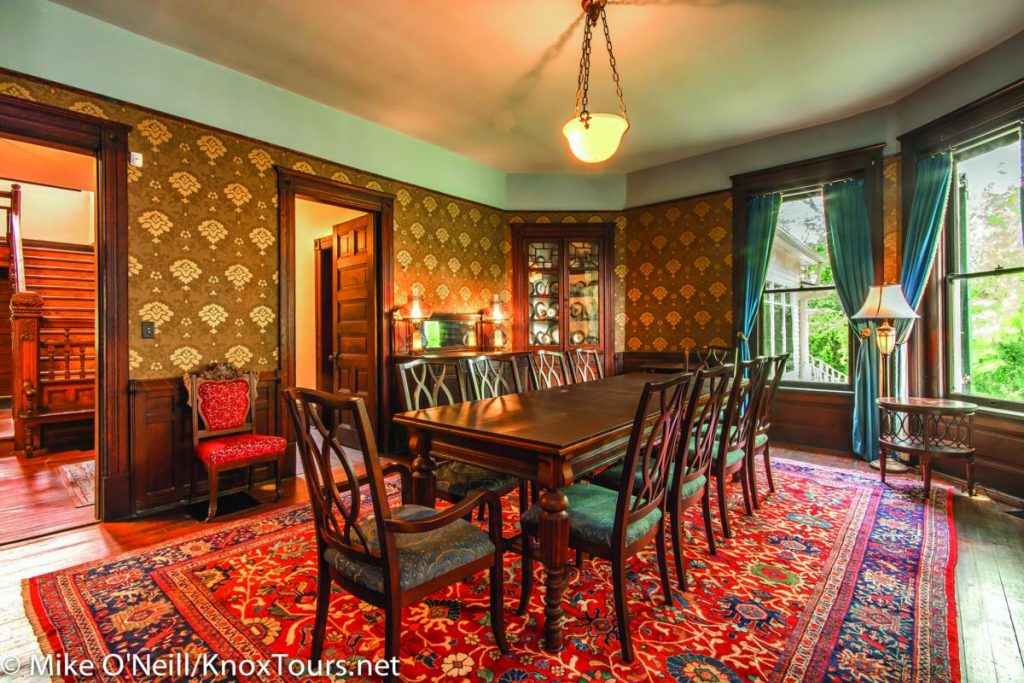 In Knoxville, the circa 1890 Westwood was like Falcon Rest in which a “wedding promise” was offered from John Edwin Lutz to his wife, Ann Adelia Armstrong Lutz. Listed on the National Register of Historic Places, Historic Westwood is a rare example of Queen Anne and Richardson Romanesque Age architecture and interiors.

Visitors can enjoy a complimentary tour led by trained docents. In addition to a sense of the Gilded Age, a highlight of the tour is Adelia’s Studio consisting of one long room with a high ceiling and skylights. Her paintings are part of the collections at the Knoxville Museum of Art, the East Tennessee History Center and the State Museum. hhknoxville.org 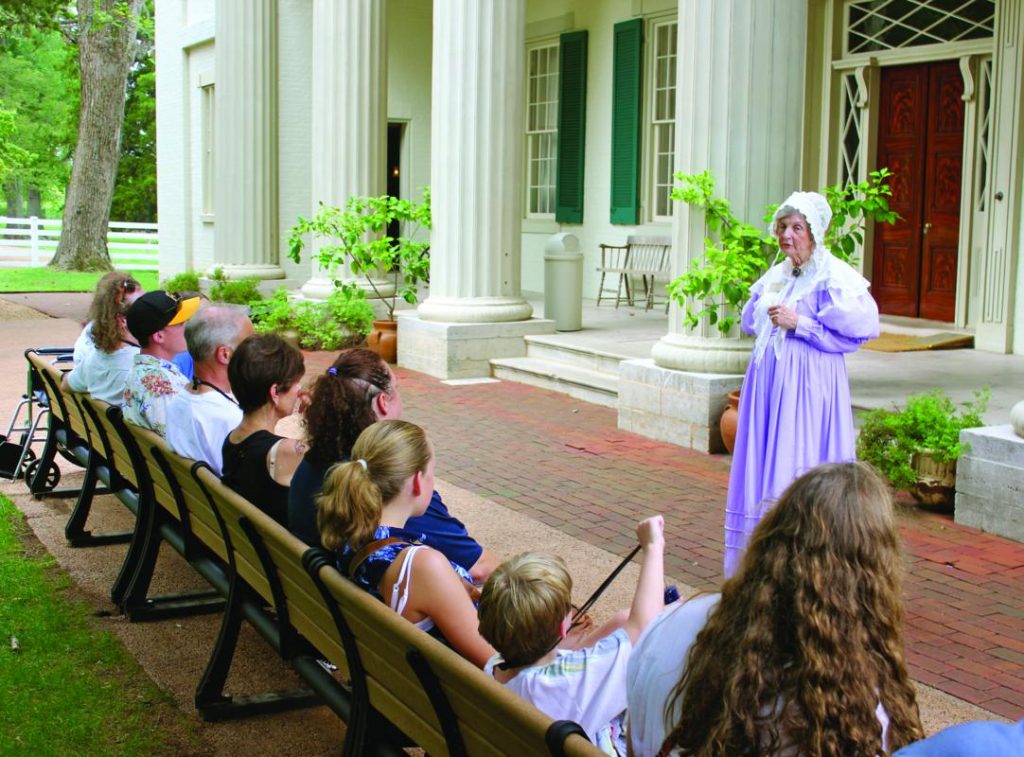 After their marriage, Andrew and Rachel Jackson lived in Nashville and in 1804 purchased the 425-acre farm that would become The Hermitage. Jackson began lucrative businesses at nearby Clover Bottom on the Stones River. It wasn’t long before he left his Superior Court judgeship to focus on The Hermitage and his Clover Bottom enterprises. The original structure consisted of eight rooms, four on each floor. While Jackson was president of the United States in 1831, the mansion went through a major renovation. Four years later, fire heavily damaged the house. The redesign both inside and out is what visitors see today. Many historians view The Hermitage as the best-preserved early U.S. presidential home.

Tours begin at the “Andrew Jackson: Born for a Storm” $1.1 million exhibit. The story is told of Jackson’s humble orphan beginnings through his presidency. Also in the Andrew Jackson Visitor Center is the exhibit “First Hermitage: Worlds Apart, Side by Side” which tells the remarkable story of the future president. The new interactive visitor experience “The Duel-Art of the Southern Gentleman” tells the story and relives the event of Jackson’s duel with Charles Dickinson. Enhancements to the group’s tour are available, including an audio tour, multimedia tour, private tour guide and presidents tour.
thehermitage.com 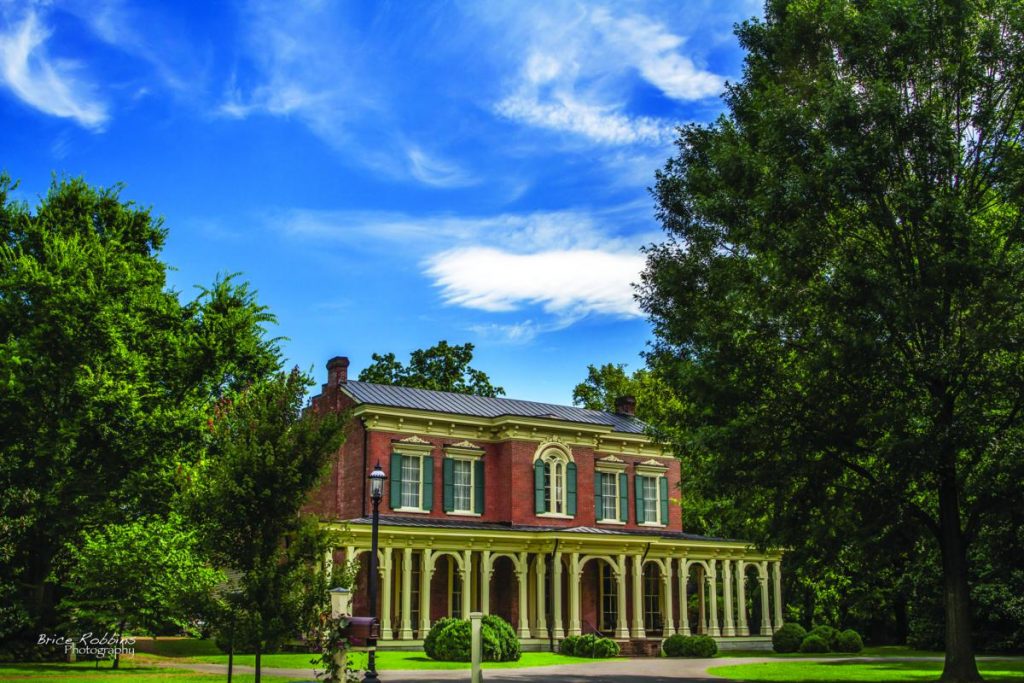 Murfreesboro and Oaklands Mansion are just a short drive on I-24 southeast of Nashville. The stunning mansion and charming city are closely tied together. Hardy Murfree purchased the property where Oaklands stands in 1798. Upon his death with no will, the tract was awarded to Murfree’s daughter in 1814. Dr. James Maney and Sally Hardy Murfree Maney moved from North Carolina four years later. Dr. Maney’s main source of income was the buying, selling and trading of land and enslaved individuals. Upon the death of Dr. and Sally Maney, the eldest son Lewis and Rachel Cannon Maney took over the management of Oakland.

From 1954, the house stood vacant and was purchased by the city of Murfreesboro in 1958. Plans were to demolish the house and develop the property but the Oaklands Association convinced the city to allow them to repair and renovate to restore Oaklands Mansion to its previous glory. In 1974, Oaklands was placed on the National Register of Historic Places. Today, in addition to trained docent-led tours visitors should plan to spend time in the gardens and visitors center. oaklandsmansion.org 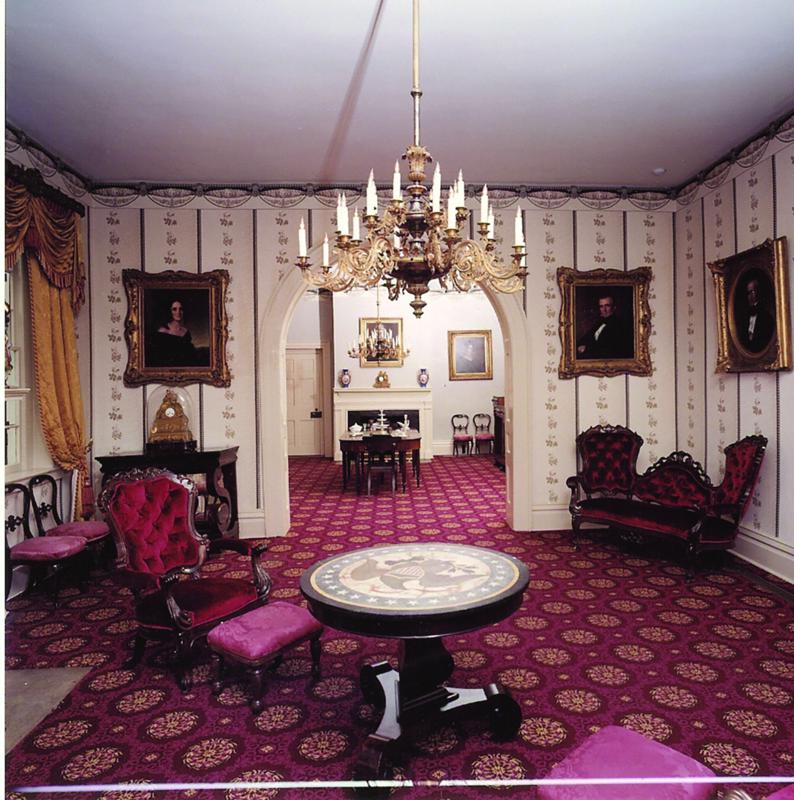 Just 45 miles southwest of Nashville off I-65 is Columbia, Tennessee and the President James K Polk Home & Museum. The 11th president of the United States made significant contributions to the young nation. He added three states to the Union, began the United States Naval Academy, issued the first postage stamp and commissioned the Washington Monument. From a humble hard-working beginning on the Tennessee frontier, Polk graduated from North Carolina University. He received legal training, served as a Tennessee Senate clerk and established a law practice in Columbia. He was elected to the Tennessee Legislature at 27, married Sarah Childress and was elected to the U.S. Congress at 29, serving 14 years, including two terms as Speaker of the House.

Group rates for 10 or more with advance reservations include tours of the James K. Polk Home and a self-guided tour of the presidential hall, kitchen and gardens. Adjacent to the main house is the 1818 Sisters’ House, where two of Polk’s married sisters lived at different times and now serves as the visitor’s center. The painted brick Main House contains original clothing, paintings, furniture and White House china. Polk Presidential Hall hosts a series of permanent and traveling exhibitions that relate to America during Polk’s lifetime.
jameskpolk.com 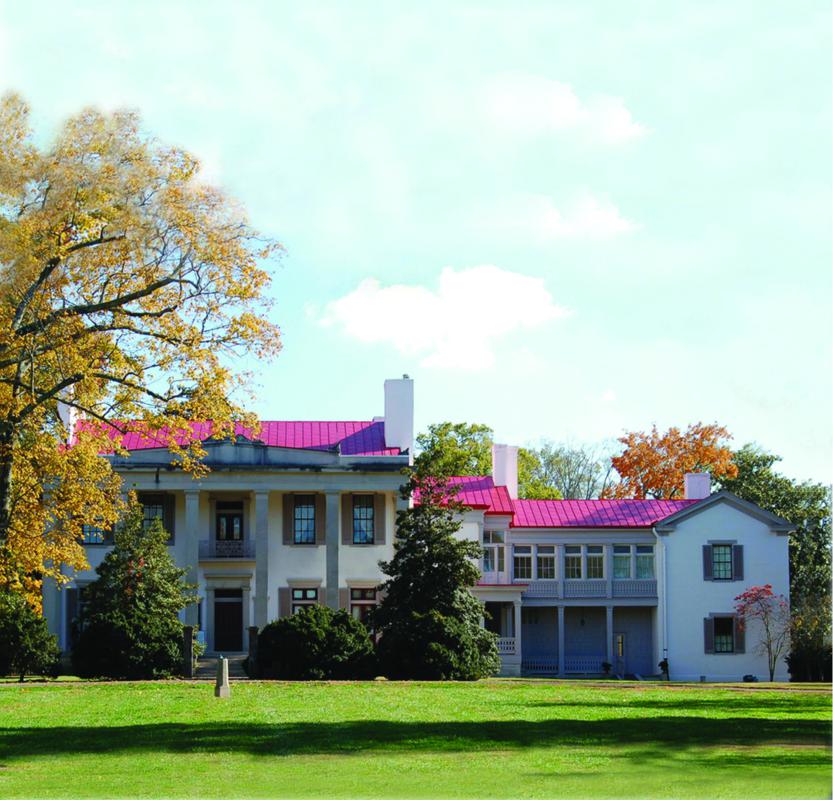 From its beginning, Nashville’s Belle Meade was a diverse operation. The 250 acres of land purchased by John Harding in 1806 contained a farm and eventually a cotton gin, gristmill and sawmill. By 1820, construction began of a new brick house that Harding began calling Belle Meade. Thoroughbred racing was gaining popularity and always the astute businessman, Harding in 1823 registered his own racing silks with the Nashville Jockey Club. Joining enslaved farm and mill workers, jockeys, trainers and grooms were added to the Belle Meade workforce. The Civil War curtailed racing and breeding in the southern states, but General Harding was able to keep all his horses. Between 1867-1868, Harding’s horses won more purses than any man in the United States. Continuing success occurred until 1893 when a weakening economy put the family deeply in debt.

Like its early diverse enterprises, today’s Belle Meade shows off a variety of group options. Guided tours include both floors of the Greek Revival mansion. The tour shares the history as told through the eyes of the Harding and Jackson families. Groups will enjoy a complimentary wine tasting and a self-guided tour of the eight historic buildings on site. In addition to the regular group tour, groups can expand their experience with a Cheese, Chocolate and Wine Pairing Tour, Food & Wine Pairing Tour, Lunch Tour, Culinary Tour or Bourbon at Belle Meade. bellemeadeplantation.com