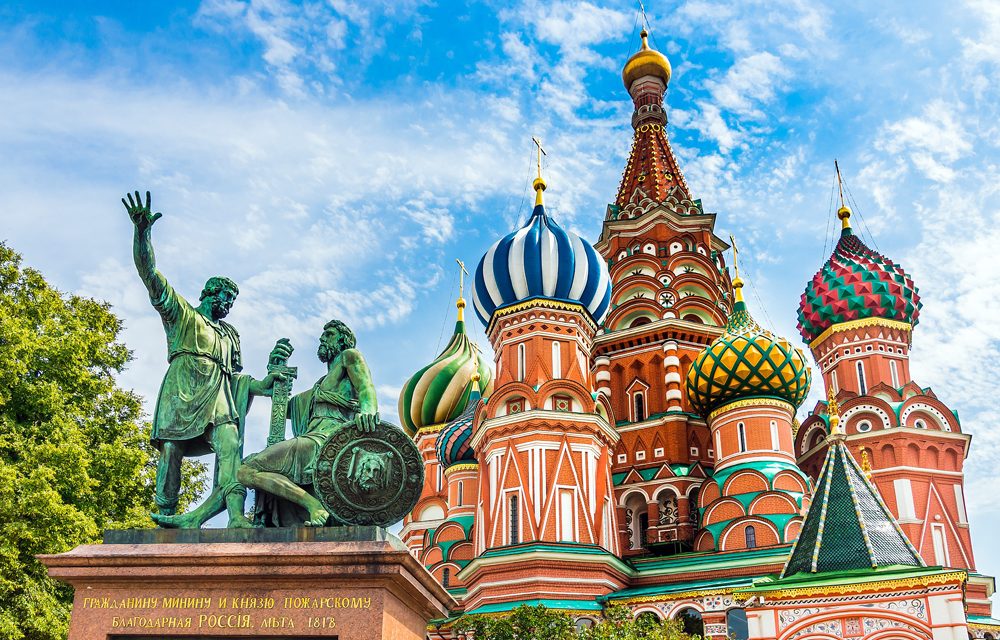 The Holy Trinity Lavra or the Holy Trinity Monastery started out as a small wooden church founded by St. Sergius of Radonezh in 1345, but soon grew to be the richest monastery in Russia. In 1422 Sergius was declared the patron saint of the Russia state and was entombed in the Cathedral of Holy Trinity at the monastery. Ivan the Terrible also has a hand in the monastery’s history. In 1559 Ivan the Terrible commissioned the Assumption Cathedral to be built as penance for killing his son and construction took 26 years to complete.

Over the years, many more buildings were added on to the monastery, and in 1742 a seminary was founded. The monastery was shut down in 1917 during the Soviet Union, but was reopened as a Russian Orthodox Church in 1945, and in 1993 UNESCO declared the monastery a World Heritage Site. The Holy Trinity Monastery is the most important monastery in Russia and the heart of Russian Orthodox Christianity. Located in Sergiyev Posad, just 45 minutes northeast of Moscow, the Holy Trinity Monastery is a must see religious site in Russia.

Church of the Savior on Blood

The Church of the Savior on Blood, also commonly known as the Church of the Savior on Spilled Blood and the Church of the Resurrection of Jesus Christ, was commissioned in 1883 by Alexander III as a tribute to his father who was killed on the site in 1881. Construction was not completed until 1907 under the reign of Alexander III’s son, Nicholas II. The church was closed during the 1930s under the Soviet Union and the church was ransacked, damaging the interior. Used as a warehouse during World War II to hold vegetables, the church acquired the nickname “Savior on Potatoes.”

In 1970 management of the church passed to Saint Isaac’s Cathedral, and restoration projects began. After 27 years of restoration, the Church of the Savior on Blood reopened in 1997. Although the church is not a full-time place of worship, the history and the architecture are a site to behold. With over 7,500 square meters of mosaics and artwork by Viktor Vasnetsov, Mikhail Nesterov and Mikhail Vrubel, the Church of the Savior on Blood draws people from all over the world to St. Petersburg to see its beauty.

Church of the Savior on Blood

Cathedral of the Intercession of the Virgin by the Moat, or as it is more commonly known, St. Basil’s Cathedral, was commissioned by Ivan the Terrible to celebrate the capture of a stronghold in Kazan. Construction on the cathedral started in 1555 and lasted until 1560. Little is known about the architects of the cathedral, except their names, Barma and Postnik Yakovlev. According to legend, once the cathedral was complete, Ivan the Terrible blinded the architects so that they could never build anything as beautiful again, although many historians believe this to be untrue.

Ivolginsky Datsan is a Buddhist monastery in Russia located in Eastern Siberia. The monastery consists of seven temples, a Buddhist University, priests houses, a museum of Buddhist art and a hotel. The main temple is protected by elaborately decorated tigers and the inside of the temple is an explosion of colors. While the architecture and landscape of Ivolginsky Datsan are beautiful and intriguing, the main draw to the Buddhist temple is the remarkably preserved body of the 12th Khambo Lama: Dashi-Dorzho Itigilov. Itigilov was born in 1852 and started his religious education at age 16. In 1911 he was appointed the 12th Khambo Lama and is credited with starting a Buddhist revival in Russia. For helping to care for wounded soldiers in World War I, Itigilov was awarded the St. Anna Award, and at the age of 75 Itigilov entered into a deep meditation and died.

Saints Peter and Paul Cathedral is the oldest church in St. Petersburg and the second-highest building. Construction began on the cathedral a month after the city of St. Petersburg was founded. The original cathedral was made of wood, but the current cathedral was constructed using stone in 1712. The church’s architecture was quite the shock as it favored the early Baroque style instead of the traditional Orthodox architecture.

One of the other unique characteristics of the cathedral is the spire on top of the bell tower. The spire reaches a height of 404 feet and has an angel holding a cross as a weather vane at the top of the spire. The interior of the cathedral is home to many beautiful works of art that have survived many tragedies and natural disasters. Saints Peter and Paul Cathedral is also famous for being the final resting place for most of the Russian rulers starting with Peter the Great. The cathedral is the oldest landmark in St. Petersburg and well worth a visit while in Russia.

Cathedral of the Archangel

The Cathedral of the Archangel was built in 1505 and finished in 1508. Ivan the Great commission the cathedral but died before it was completed. Italian architect Alevisio Novi was in charge of the project, and he mixed Italian and Russian architecture together to create the cathedral’s design. The frescos in the church were painted between 1652 and 1666 by more than 100 artists under the supervision of painters Simon Ushakov, Stepan Rezanets and Fyodor Zubov.

The cathedral is the final resting place of all the Russian rulers up until the 14th century, when Peter the Great moved the capital from Moscow to St. Petersburg. There are 46 tombs in the cathedral, including those of Ivan the Great and Ivan the Terrible. In 1955 the cathedral was opened as a museum for the public. As the final resting place of so many famous rulers and home to so many beautiful frescos, the Cathedral of the Archangel draws thousands to see the history and the wonders it holds.

Cathedral of the Archangel

Russia has a long and diverse religious history, from Celtic and Greek influences to Buddhism and Christianity, making it an ideal destination for religious travel. These sites are only six of the many religious destinations found all over Russia, so be sure to keep Russia in mind for your next trip. While not a traditional religious destination, you will not be disappointed by the beautiful and historic sites you discover. With rich history, art, architecture and religion, Russia will blow you away.