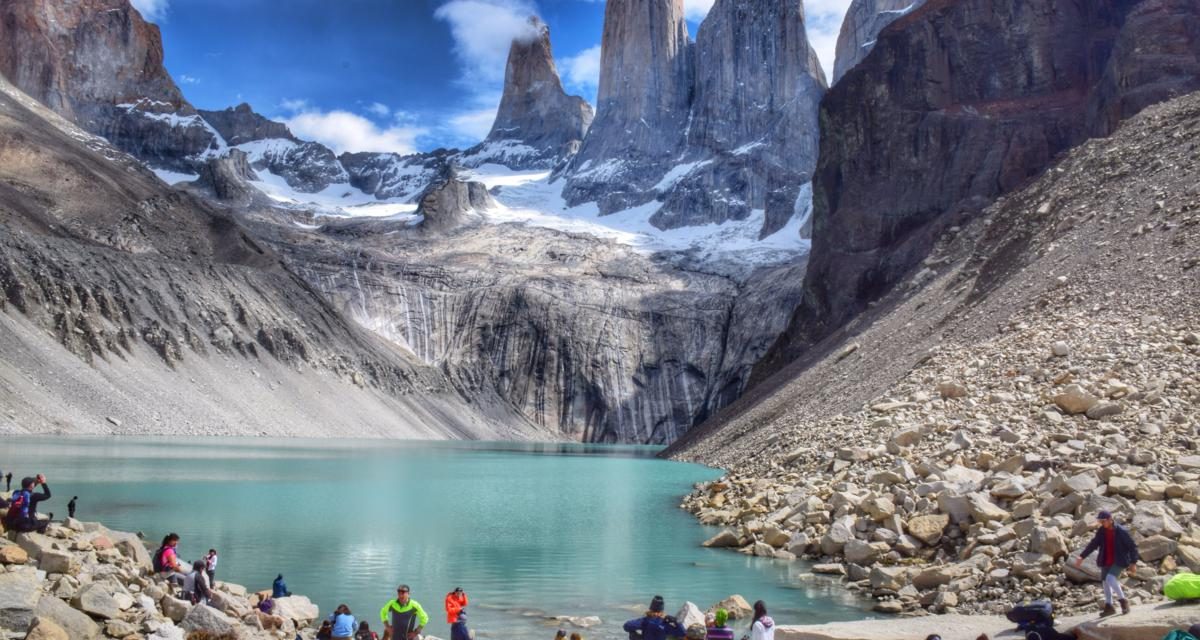 Places like Mongolia, Patagonia and Sri Lanka may not be for everyone, but for globetrotters who consider Western Europe, China and Australia passé, the call of the offbeat is irresistible.

Travel destinations that were once under the radar are emerging as vacation hotspots for those in the know. Perhaps it’s a country or region that had experienced civil unrest and now is seeing better days. Or a place that is just hitting its stride thanks to new developments and media buzz.

Less-traveled parts of the world appeal to the adventure-minded and culturally-inclined. Looking for bragging rights, these savvy travelers have their bucket lists and are concerned with visiting “hidden” places before they get overrun with fellow tourists. End game: get there sooner than later.

Here are some up-and-coming destinations that may interest your more discriminating clients:

This small island nation at the tip of the Indian subcontinent is No. 1 on Lonely Planet’s list of the top 10 places to visit in 2019. Says Trish Ping, Lonely Planet’s destination editor, “Sri Lanka has all the things visitors love about South Asia – scenic beauty, lively markets, fresh and delicious food– and its improved tourism infrastructure and transportation means it’s more accessible than ever.” 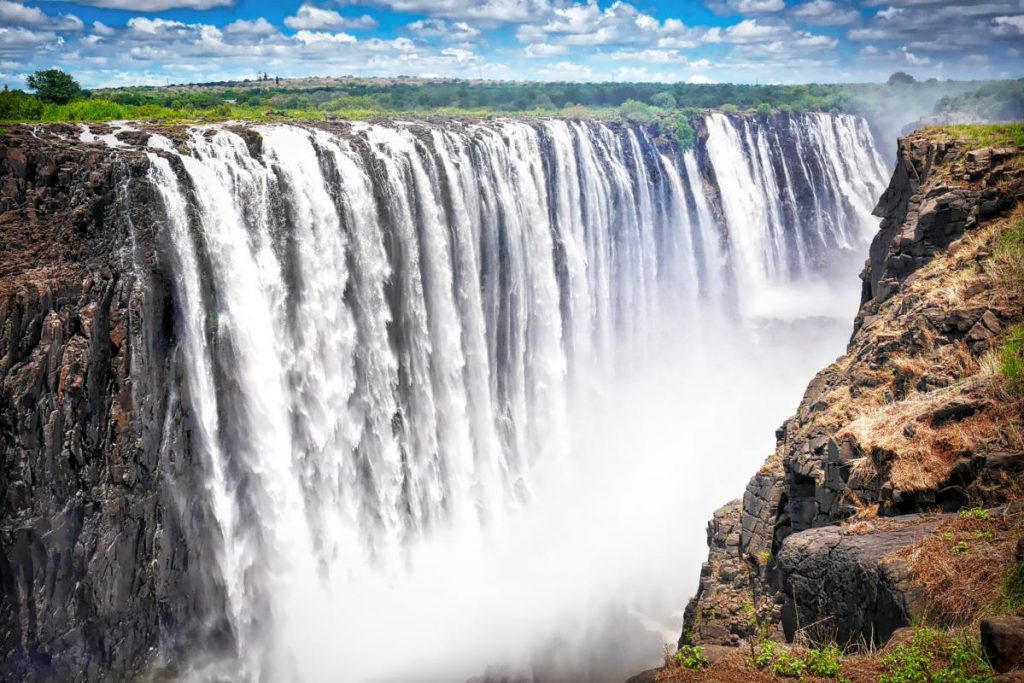 A game safari in Zimbabwe is not complete without a visit to Victoria Falls, considered the world’s largest waterfall.

Now that despot Robert Mugabe has departed the scene after years of iron rule, there are hopes that an increase in political stability will encourage more safari-goers to choose Zimbabwe, whose national parks are among the best in Africa. They’re certainly less crowded than the game preserves in more popular Kenya, Tanzania and South Africa, lending a feeling of exclusivity. Hwange National Park, the best known, has the big five—elephant, lion, leopard, cheetah and buffalo. Another draw for Zimbabwe: the majesty of Victoria Falls. Zimbabwe is No. 3 on Lonely Planet’s 2019 list.

Bordered by Russia and China, the 19th largest country in the world—and one of the least densely populated—is truly off the beaten path. Half the population still lives a nomadic lifestyle, a fact that speaks to its allure. Otherworldly landscapes, including vast steppes and the Gobi Desert, appeal to adventure travelers geared up for trekking, horseback riding or searching for dinosaur fossils. Many tours include overnights in traditional ger (yurt) camps with creature comforts. The capital city of Ulaanbaatar, long
closed off to the rest of the world, is blooming with a youthful vibe.

While Western Europe gets all the attention, many see Eastern Europe as the next frontier. Belgrade, the capital of Serbia and of old Yugoslavia, is riding a wave of popularity with its booming art, design and music scene. Young people throng the pedestrian- friendly streets lined with 19th century buildings, and nightspots abound. Floating restaurants add to the festivity in central Belgrade, whose chief landmark is a centuries old fortress overlooking the confluence of the Danube and Sava rivers. Novi Sad, the 2019
European Youth Capital, captures the No. 3 spot on Lonely Planet’s list of top 10 cities.

A small country just south of Dubrovnik and other Croatian resort towns on the Adriatic Coast, Montenegro gained independence from Serbia in 2006. Not as well-known as Croatia and Serbia, it entices travelers with pristine beaches, steep shorelines and medieval villages. Outdoors lovers can go rafting in the Tara River Canyon or explore the forests and waterfalls of Durmitor National Park. European sun-seekers have discovered Montenegro, but it’s still relatively new territory for Americans.

Oenophiles consider the country of Georgia, formerly part of the Soviet Union, the next great wine destination. Wine-growing actually dates back 7,000 years in this land between Russia and Turkey. The pleasant capital of Tbilisi seems to have a wine bar on just about every corner, and wine tours visit
Kakheti, the main producing region. Tucked between the Caucasus Mountains and the Black Sea, Georgia also has old churches, alpine beauty and seaside resorts. 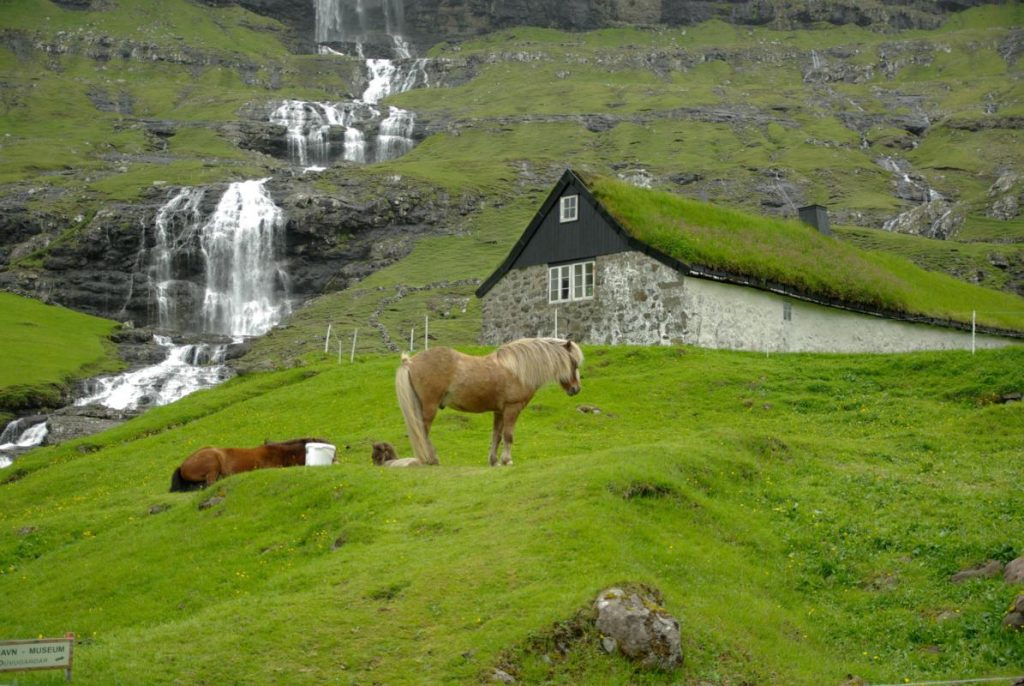 It seems that everyone is going to Iceland these days, but this group of 18 rocky islands in the North Atlantic appears to be the next Nordic frontier. Nature is the star here, with steep cliffs, waterfalls, jagged coastlines and dramatic fjords, not to mention colonies of adorable Atlantic puffins. There’s a budding arts and music culture in Torshavn, the cozy capital city of 20,000. This self governing Danish possession, located between Iceland and Norway, is a short flight from Copenhagen. In this sub-Arctic archipelago, sheep outnumber people 2 to 1 and make great photo ops, as do the turf-roofed houses.

At the other end of the world, this wild region shared by Chile and Argentina is another adventure traveler’s paradise. Numerous outfitters can arrange treks across glaciers and coastal cruises that allow closeups of whales and Magellanic penguins here at the tip of South America, only 600 miles from Antarctica. Three- and four-day trips on the expedition ships of Chilean cruise line Australis showcase this unspoiled land of fjords, bays and islands that make up Tierra del Fuego, a remote, windswept archipelago
that stretches down to Cape Horn. Ushuaia, Argentina, the southernmost city in the world and a jumping-off point for intrepid explorers, commands a magical setting at the foot of snow-covered mountains, the tail end of the Andes. 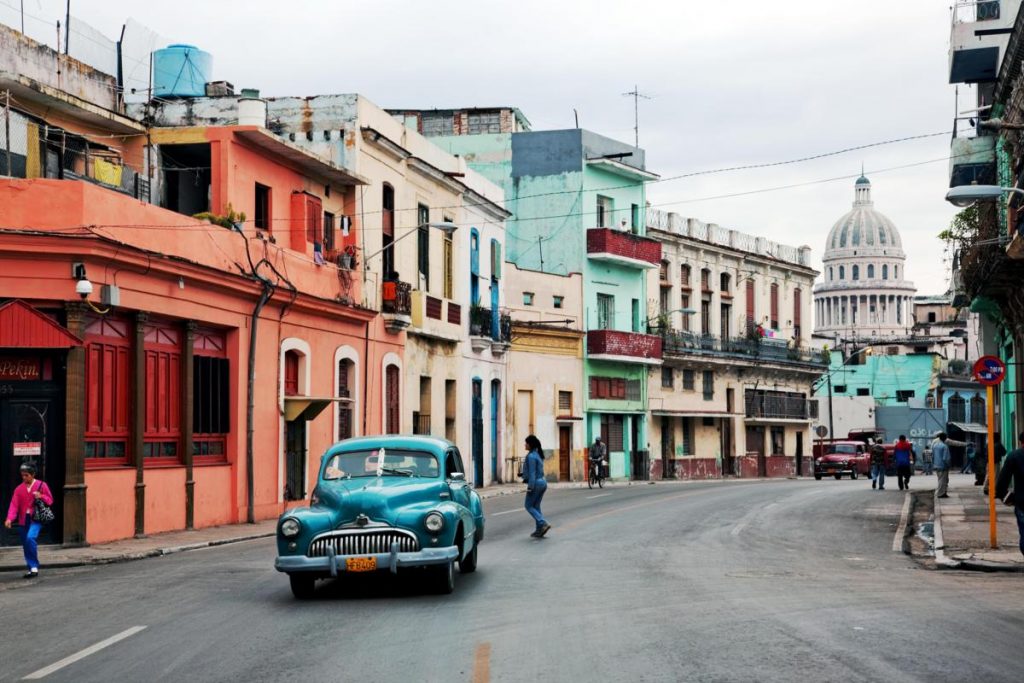 Cuba continues to grab the imagination of American travelers. Vintage 1950s cars are common on the streets of Havana.

This Caribbean island, pretty much off-limits to the average American tourist until U.S.-Cuba relations started thawing a few years ago, continues to be on the short list of those who have to be on the cutting
edge. The proximity to Florida, just 90 miles away, makes it the most accessible emerging destination. Many Caribbean cruises from Florida, on lines like Carnival and Norwegian, include at least a port call in Havana, while culturally-oriented land tours to multiple towns draw those who want a deeper look into Cuba’s history and social fabric. Tourists are intrigued by Havana’s cobblestone streets lined with colonial architecture, clubs with salsa music spilling onto the sidewalks and classic 1950s American cars used as taxis. Many make a pilgrimage to El Floridita bar for a daiquiri at Ernest Hemingway’s old hangout.

The South American country of Colombia, now seeing brighter days, is making a comeback as a tourist destination.

Long associated with drug cartels and political corruption, South America’s fourth-largest country is experiencing an upswing in tourism now that peace has returned and many of its problems are in the past. Bogota, the capital, is undergoing a resurgence with new restaurants, boutique hotels and craft brewers. An arts explosion, including a plethora of stunning street murals, is fueling Bogota’s cultural boom. The Caribbean coastal city of Cartagena, boasting fine beach resorts and a walled Old Town bursting with Spanish colonial architecture, is also on the rise.

Lonely Planet’s Best in Travel 2019 ($17.99, 215 pp.) lists the hottest countries, regions and cities around the world, with descriptions of destination highlights and what makes it prime for a visit next year. Filled with lavish color photography, the hard-bound volume also spotlights 2019 attraction openings, new food experiences and top trends, such as stargazing and genealogical journeys. Among its favorite “Best Value” destinations are Egypt’s Southern Nile Valley, Albania, Ecuador, Houston and Great Smoky Mountains National Park. The best-selling book, now in its 14th edition, has a landing page (lonelyplanet.com/best-in-travel) that features tips and videos on visiting each destination.