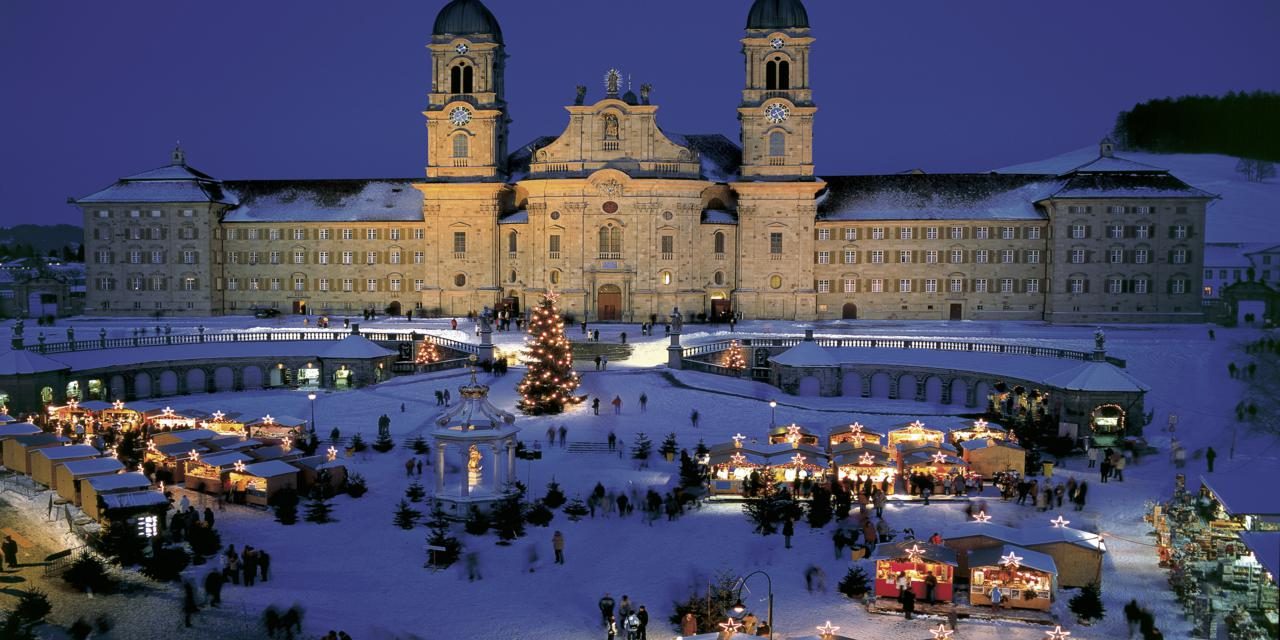 For groups, Switzerland offers truly unique experiences that very few other countries can match. Its historic cities, impressive churches and legendary mountains, along with its diverse population, together form a compelling reason to visit.

Winter in Switzerland becomes a wonderful of rich traditions, good cheer, hearty foods, colorful Christmas markets and genuine friendliness. The Swiss take their holidays seriously, but in a genuine, unpretentious way. It’s more about being with friends and family, enjoying a hot mulled drink and relaxing around a warm, cozy fire.

During the holidays, many families enjoy a hike in the woods to find the perfect Christmas tree, stopping by a mountain hut for cheese fondue and opening daily. Advent calendars with children in the days leading up to Christmas. 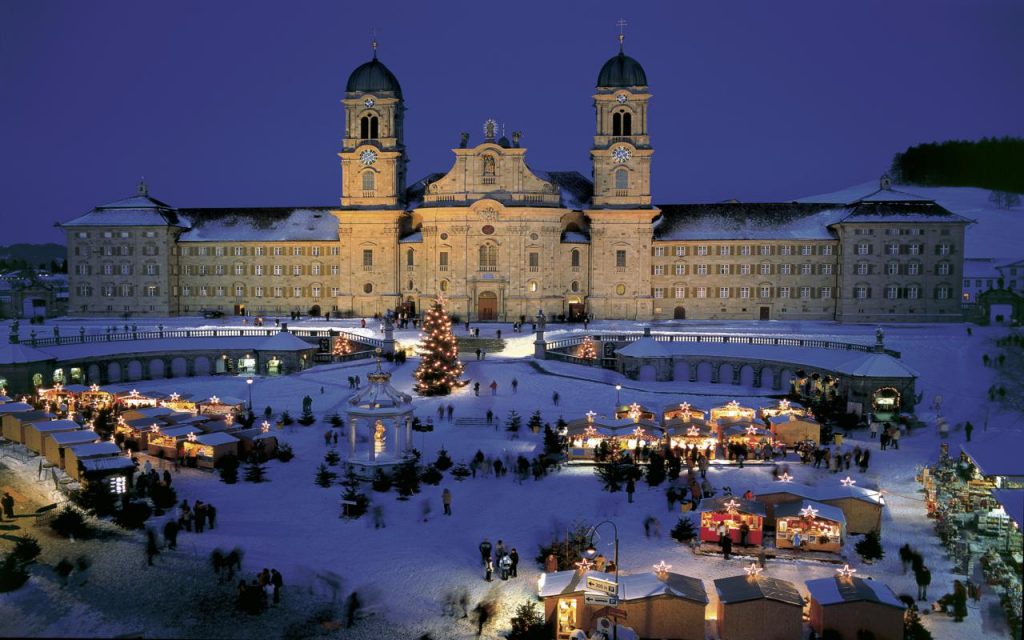 In Bern, the capital of Switzerland, the Old Town at Wausenhausplatz is transformed into a beguiling Christmas market against a backdrop of 15th to 17th-century houses. Creative holiday workshops and Christmas concerts are offered throughout the city in theaters, concert halls and churches.

With 2017 as the culmination and capstone of the important Luther Decade and the 500th anniversary of the Reformation, Switzerland’s 16th-century religious notables such as Huldrych Zwingli and John Calvin will be in the spotlight. 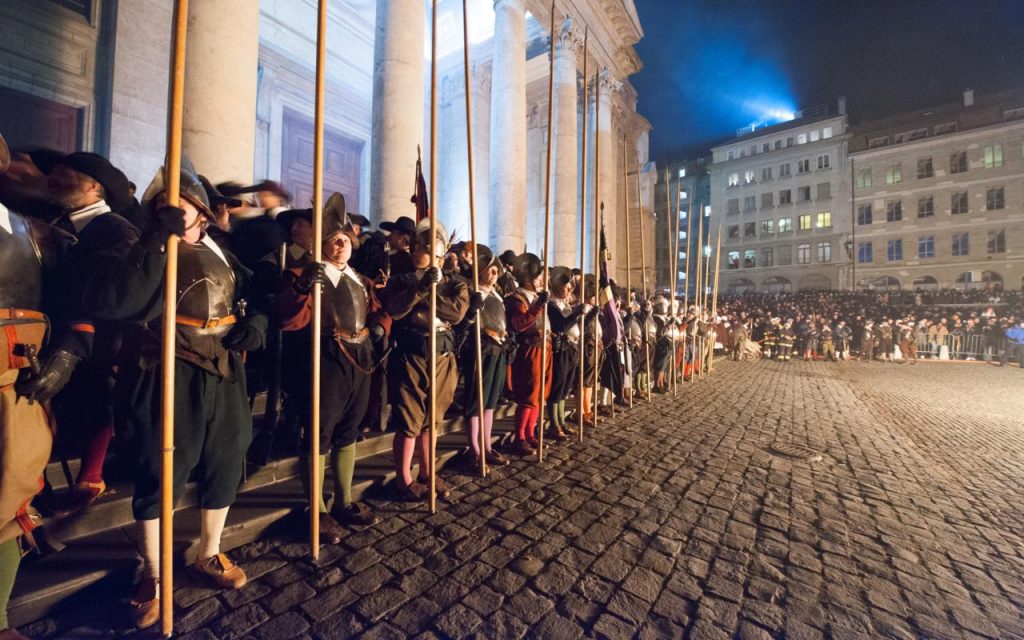 Called the “Protestant Rome,” Geneva over the years has been impacted by the Reform Movement and John Calvin’s inﬂuence. Located on beautiful Lake Geneva, with dramatic views of Mount Blanc, this city, with its long-standing humanitarian tradition and cosmopolitan ﬂair, is the European headquarters of the United Nations and the Red Cross. It also is home to the International Museum of the Reformation, which is a must-visit on any traveler’s list for 2017 with the 500-year anniversary celebration of the reformer Martin Luther.

Winter celebrations in Geneva include the Escalade Festival, which has taken place for 400 years. Running from Dec.
9-11 this year, it remembers the unsuccessful 1602 attack by the Duke of Savoy and his soldiers to take over the city. The highlight is a torchlight parade beginning in the Old Town and featuring costumed characters who re-enact the dispersal of the king’s troops.

A December tradition since 1935 is the Coupe de Noël, the world’s largest open- water swimming competition. This year more than 1,900 swimmers are registered for the December 18 event, which is held in Lac Léman and begins at the Jardin Anglais. Geneva’s winter spirit is also evident at a large ice skating rink at Parc des Bastions, a beautiful park in the city center that features the famed Reformation Wall. 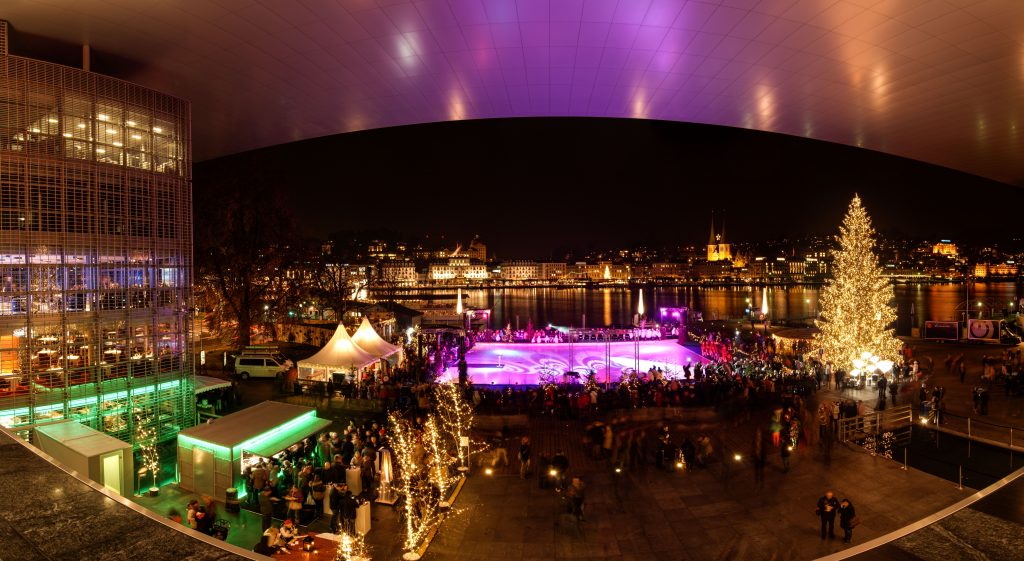 Lucerne, a centuries-old city on the shores of pretty Lake Lucerne, becomes a truly magical place at Christmastime. Snow on the rooftops, festive Christmas markets and sparkling lights gracing the main trafﬁc bridge across the Reuss River transform the town into holiday mode.

As Advent begins, Lucerne goes into high gear with a spectacular blaze of Christmas lights around the city. Adjacent to the lake there’s the colorful Live On Ice skating rink, which continues through January 2. Other top attractions include Christmas cruises on Lake Lucerne, a Father Christmas Procession accompanied by the Three Magi and the Holy Family, carol presentations in the Old Town at Christmas Eve, a theatrical Advent Calendar at the Lucerne Theater and special holiday concerts.

Also, tour groups and individuals can partake in a unique overview of Christmas in Lucerne where leaders will explain the origins of Christmas and Father Christmas, how pine tree boughs relate to the season, hear important details about Lucerne’s Christmas traditions and visit a life-size Nativity set. The meeting point is the Jesuit Church.

As many as 11 distinctive Christmas markets in Lucerne and the area will also be featured during the holidays. Hot mulled wine and roasted almonds, as well as many hand-made craft items, are offered at these intriguing markets. And on New Year’s Eve, a giant ﬁreworks display on the lake starts the New Year in Lucerne. 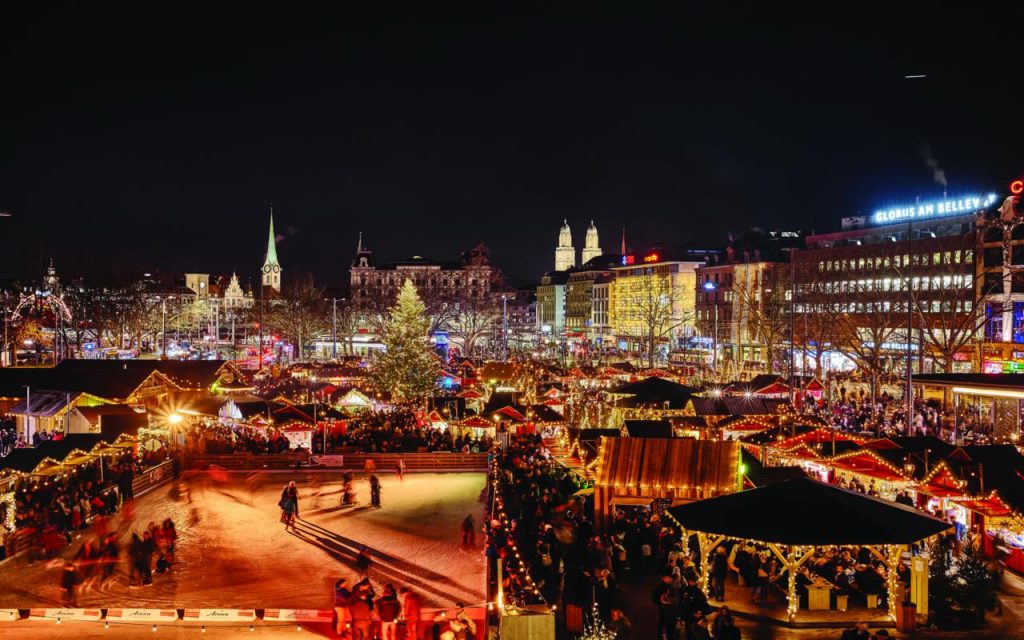 December is a special time in Zurich, when the 2,000-year Old Town is bathed in the warm glow of millions of Christmas lights, carols ring out throughout the city, and the sweet smell of cinnamon and hot mulled wine permeates the air. This, along with seven fabulous Christmas markets, extended shopping hours and more than 12,000 glittering lights on the famous Bahnhofstrasse alone, makes Zurich a must-see city during the holidays.

The colorful Christmas Market at the main train station is always a busy, bustling place during the holidays. The popular market, the largest covered market in Europe, is a top attraction, with a nearly 50-foot-high Christmas tree adorned with hundreds of shimmering Swarovski crystals. Another exceptional Christmas market, the oldest in Zurich, is located in Zurich’s Old Town, the Niederdörﬂi.

More holiday fun comes with the Circus Conelli at the Bauschänzli town square, a Santa Claus parade, winter swim event on the Limmat River,  a foot race through the Old Town as well as the popular event Lichterschwimmen, with hundreds of ﬂoating candles on River Limmat—these are just a few of the other Zurich attractions that await visitors during this festive season. 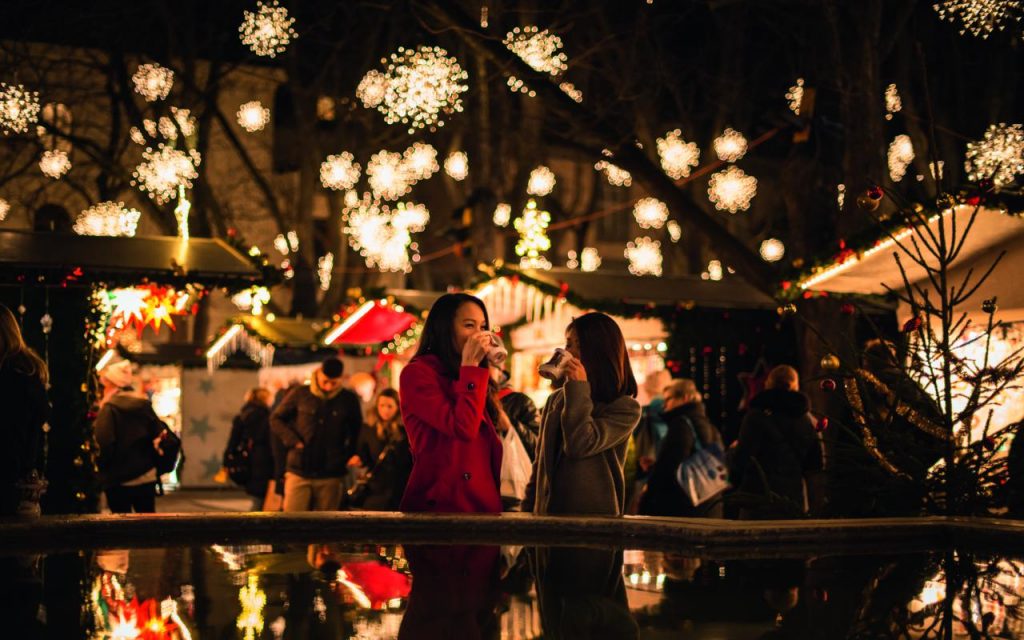 Basel is known as Switzerland’s largest and most beautiful “Christmas City.” Basel’s main buildings and bridges are aglow with lights during the Christmas and New Year’s holidays, and 100 decorated pine trees line Europe’s longest Christmas Street.

Dazzling Christmas markets at Barfüsserplatz and Münsterplatz, with nearly 200 decorated traditional wooden stalls, offer a one-of-a-kind experience every day during the season. Both locations are in Basel’s Old Town on beautiful squares, with Münsterplatz being next to the town’s famous medieval Gothic Cathedral. Traders and artisans present their wares, from pottery to spices, wooden toys to decorations, as well as perfumes, candles and scarves. There are sweet gifts aplenty, including the renowned Basel Läckerli biscuits, and hungry shoppers can enjoy wafﬂes, juicy sausages and a glass of hot mulled wine.

The city’s shops are outﬁtted for the season. Johann Wanner, the “couturier of Christmas” has his famous shop in Basel’s historic center, well worth a visit for its beautiful Christmas decorations, hand-blown glass ornaments and traditional wooden toys. Additionally, holiday events and exhibits in Basel include the Spielzeug Welten Museum, the 50th anniversary of the Jüdisches Museum and Archaeology Christ in the Fifteenth and Sixteenth Centuries at the Kunstmuseum Basel. Additionally, Salvation Army concerts, a special performance at the Puppet Theatre and a musical Advent at the Basel Theater.

A popular city tour explores specially-illuminated streets and squares, and relates stories about the region’s most charming Advent customs.

Although only about twice the size of New Jersey, and a little under 16,000 square miles, Switzerland deals some big cards when it comes to playing to groups. A multi-cultural, multi-lingual country, it is located in the very heart of Europe. Sharing common borders with Germany, Italy, France, Austria, and the Principality of Liechtenstein, Switzerland is at the crossroads of Continental Europe.

Getting There By Air 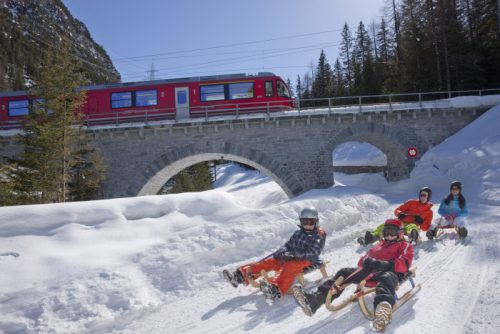 Switzerland’s public transport system is known to be one of the ﬁnest in the world. A dense network of reliable railroad,
bus, ship, tramway and mountain cable car systems, along with a detailed timetable, allows visitors to reach nearly any location in the country fast and easily. The punctuality and cleanliness of Switzerland’s public conveniences are revered the world over. One of the best ways to travel across Switzerland is to purchase a Swiss Travel Pass which entitles the holder to unlimited travel, discounts on other transportation options, and also offers free admission to 450 museums.

Switzerland has a population of 7.5 million. The largest city is Zurich, with 350,000 people.

Everyone talks about the breathtaking mountains in Switzerland—65% of the country is covered by the Alpine Region, commonly called the Swiss Alps. This natural feature affords visitors a wide range of sports and recreational activities such as skiing, hiking and mountain biking. The Matterhorn, at 14,690 feet high, is a star attraction. 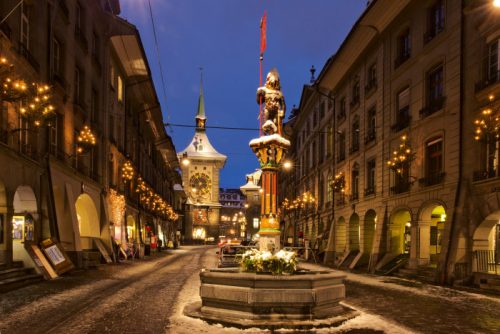 There are 26 cantons in Switzerland, three of them joining together initially in 1291 to form the Swiss Federation. The last canton to join was Jura in 1978. Four languages are spoken in the country: German, Italian, French and Romansh, which is spoken mainly in the canton of Graubünden. English is commonly understood throughout the country.

Depending on altitude, from March to June and September to December, temperatures vary between 40 degrees and 72 degrees Fahrenheit, between 64 and 82 degrees in July and August. January-February temperatures range from 28 to 44 degrees. 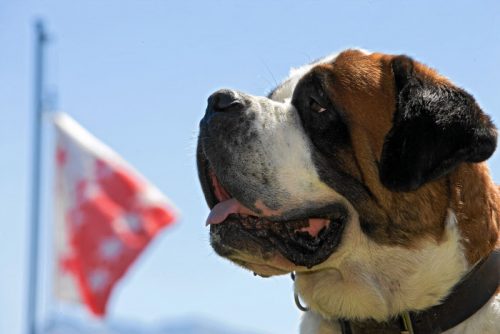