Utah’s Natural Treasures are a Wonder to Behold 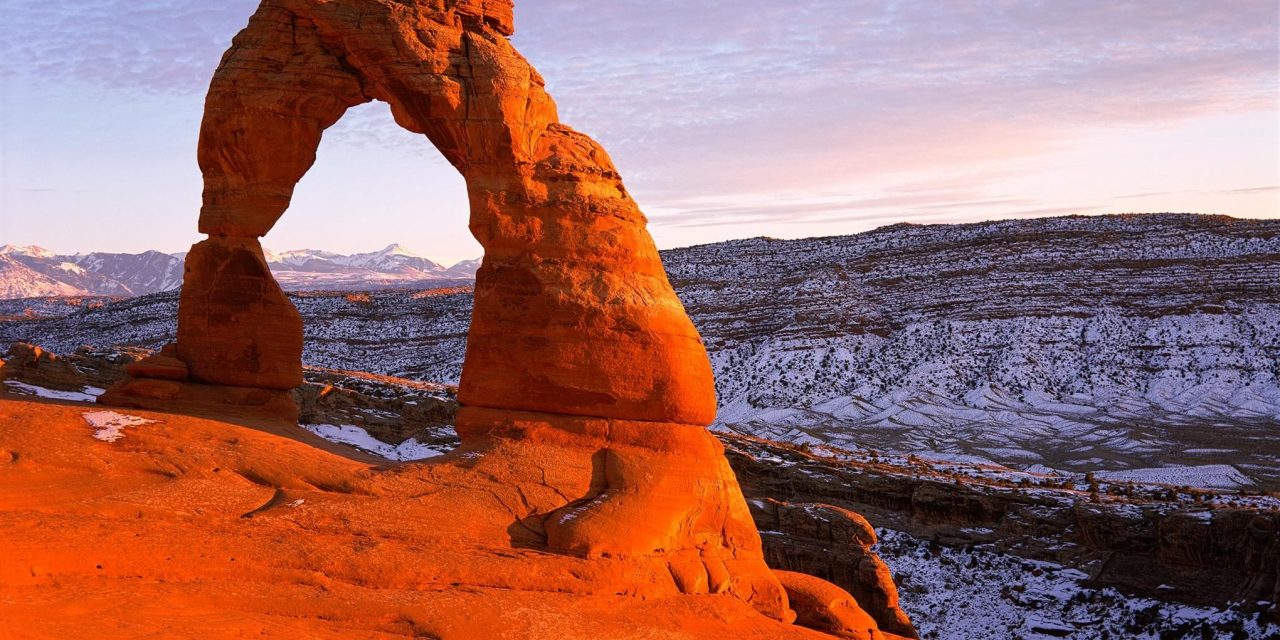 Connecting to the roots of our National Parks

As the summer sun rolls in and melts the reminiscence of winter and early spring snowfalls, trail paths weaving through pine forests and atop rocky plateaus begin to defrost as well. Utah provides outdoor lovers with the opportunity to explore five of America’s greatest natural treasures protected by the National Park Service, and alongside geologic masterpieces and star filled night skies, one can enjoy a PB&J lunch while resting on a 225-million-year-old rock.

Perhaps due to the picturesque pink and red striped sandstone cliffs and the copious variety of plants and animals, Zion became Utah’s first national park and exhibits more than 90 miles of trails to discover. Hidden in the backcountry of Zion is the remote Left Fork of North Creek which calls for canyoneering and hiking to explore the infamous slot canyon, the Subway. The “bottom-up” hiking route is the only way to traverse the Subway without rappelling between chasms, however, all routes are labeled as strenuous and may require traversing through pools of debris-filled water and ascending slippery boulders. If wet socks do not sound like the ideal experience, the Pa’rus Trail can be found just north of the Visitor Center and is wheelchair-accessible and pet friendly. The paved route follows along the Virgin River and weaves through fields overflowing with wildflowers and the occasional mule deer. The Narrows section of Zion Canyon is notorious for its towering red walls and the Virgin River which carves its way through and acts as an upstream hiking trail. Amidst the rocky peaks of the southeastern section of the park, emerald pools surrounded by rich vegetation can be admired while cooling near trickling waterfalls, and desert atmospheres and towering peaks can be appreciated from a car window while cruising along the Kolob Canyon Road.

Arches National Park is notoriously named after its soaring stone arches, pinnacles, and balancing towers. The unique curves and configurations of the wrinkled earth are most popularly explored by foot or car, whether it be route finding in the Fiery Furnace canyon or cruising along the Windows Section road. An easy to reach viewpoint of a large boulder balanced on a narrow pillar can be found during the 20-minute paved route of the Balanced Rock loop trail. For a more moderate hike, Park Avenue dives into a deep canyon and arrives at the almost 5,000-foot spires known as the Courthouse Towers. A scenic drive to the Delicate Arch Viewpoint presents the mesmerizing free-standing arch, perhaps best admired during sunset when the red and orange hues are at their peaks. Although hiking comes to a close with the setting of the sun, Arches Park provides one of the most spectacular views of the night sky. Due to minimal light pollution, the park is certified as an international dark sky park with the Panorama Point being a great viewing space open every night from dusk to dawn. 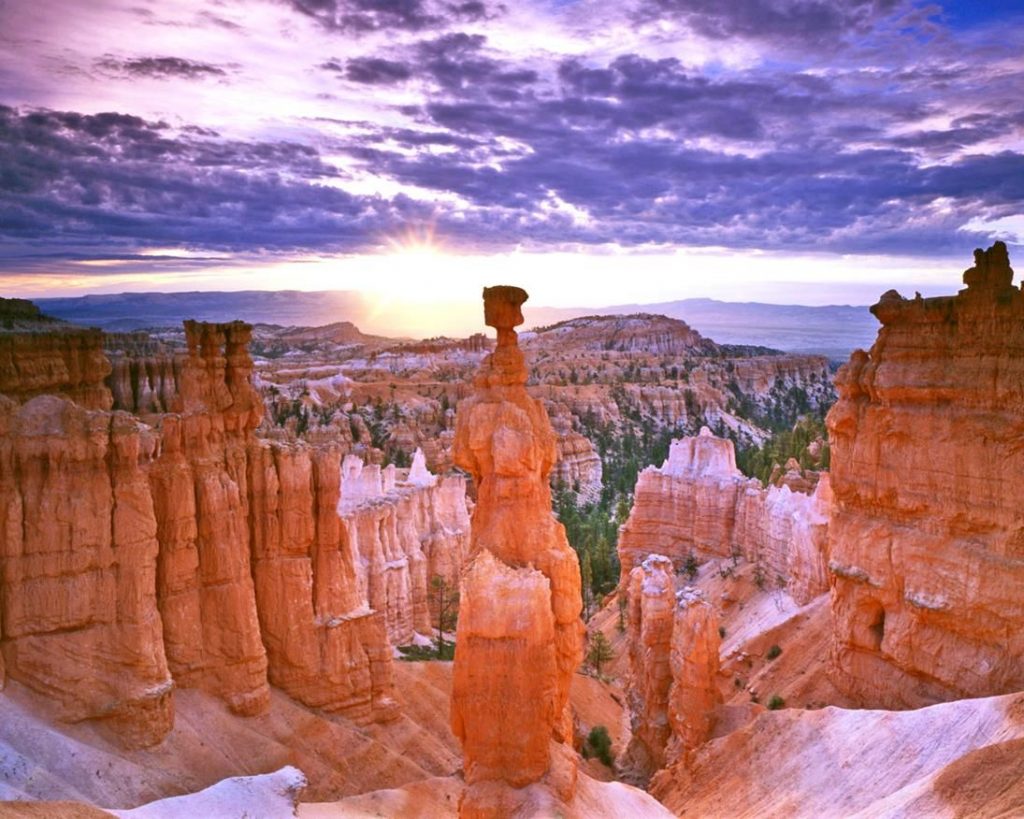 The high elevations and hundreds of hoodoos which decorate Bryce Canyon have designated this park as a superior spot for outdoor excursions, night sky viewings, and wildlife sightings. Possibly the most iconic area of the park is Bryce Amphitheater, which has the largest concentration of hoodoos. These irregular rock spires can be best admired from viewpoints including Bryce Point, Inspiration Point, Sunset Point, and Sunrise Point. Popular day hikes such as the Bristlecone Loop and Swamp Canyon Loop lead to rewarding overlooks of canyons dotted with blue spruce trees and singing songbirds. The Southern Scenic Drive weaves along the main park road and encounters highlights such as Bryce Amphitheater, Rainbow Point, and Natural Bridge, and guided horseback riding trails are offered along rocky paths with the hopes of spotting a Utah Prairie Dog or Uinta chipmunk. Being a sanctuary for natural darkness, Bryce Canyon provides expansive sites, namely Yovimpa Point, to gaze at the Milky Way constellation or galaxies dancing around a glistening new moon.

Canyonlands National Park is a mesmerizing environment divided into four districts of desert terrain carved out by the currents of the Colorado River and its tributaries. The primitive desert atmosphere is most easily accessible on the paved scenic drives which wind through the Island in the Sky district and can reach emotion-stirring overlooks. Four-wheel-drive roads are an option for those looking for an off-road thrill, such as the White Rim Road, and many unpaved excursions can lead to campsites, trailheads, and unbelievable views of the backcountry. A desolate atmosphere dotted with sandstone spires can be found in the Needles district of the park, and true to its backcountry seclusion, entrance into this area requires hiking and four-wheel driving to reach the main attractions. The lengthy but rewarding trip into the remote district of the Maze requires excellent route finding and perseverance, and after maneuvering over Slickrock and wobbly boulders, one can discover the Horseshoe Canyon Unit which offers original American Indian art panels. A break from the sweltering sun can be found in cooling waters while cascading along the flatwater of the Colorado and Green rivers or rushing down the rapids of the Cataract Canyon. 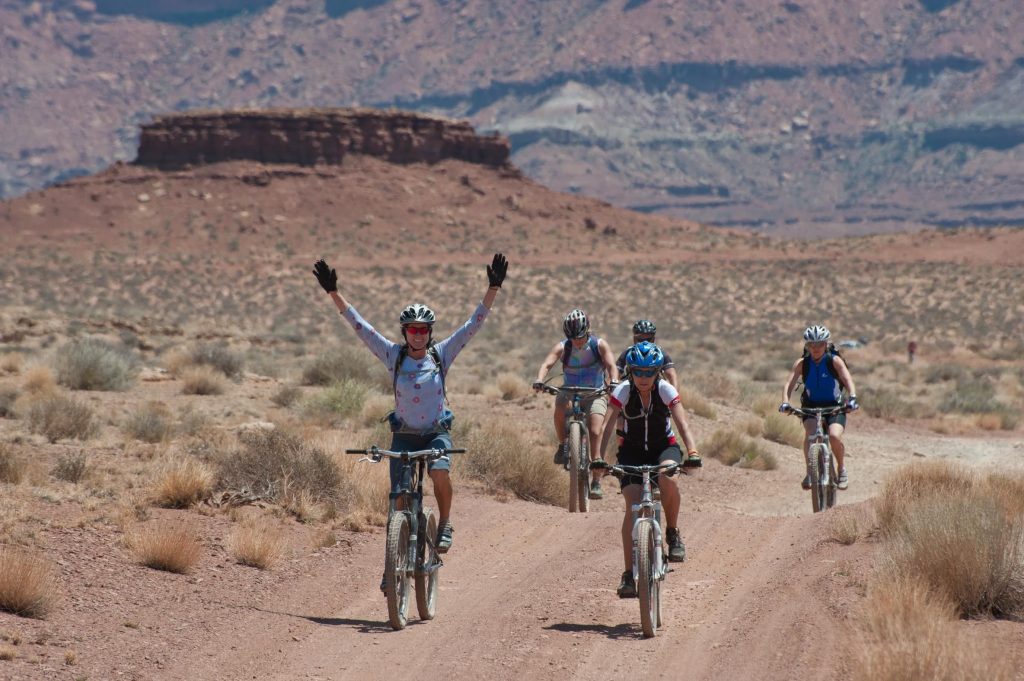 Canyonlands National Park is a mesmerizing environment divided into four districts of desert terrain carved out by the currents of the Colorado River and its tributaries. Photo credit: National Park Service

Sitting in the heart of red rock country, Capitol Reef National Park wraps around the notorious Waterpocket Fold and provides over 200 miles of marked routes. The park can be navigated by car along the popular Scenic Drive Road, canyoneering through the layers of Capitol Reef, or perhaps by horseback along Halls Creek trail. Whichever method is used, it is essential to visit the 100-mile long Waterpocket Fold and witness the ongoing geologic processes which continue to form the monstrous buckle in Earth’s crust. A four-wheel drive excursion through the Cathedral Valley district uncovers breathtaking tours of the rugged San Rafael Swell and towering sandstone towers, as well as giving access to numerous trails with unforgettable lookouts. This route is also accessible to bikes, however for a less strenuous ride, trails along the Scenic Drive and Spur roads are highly recommended.