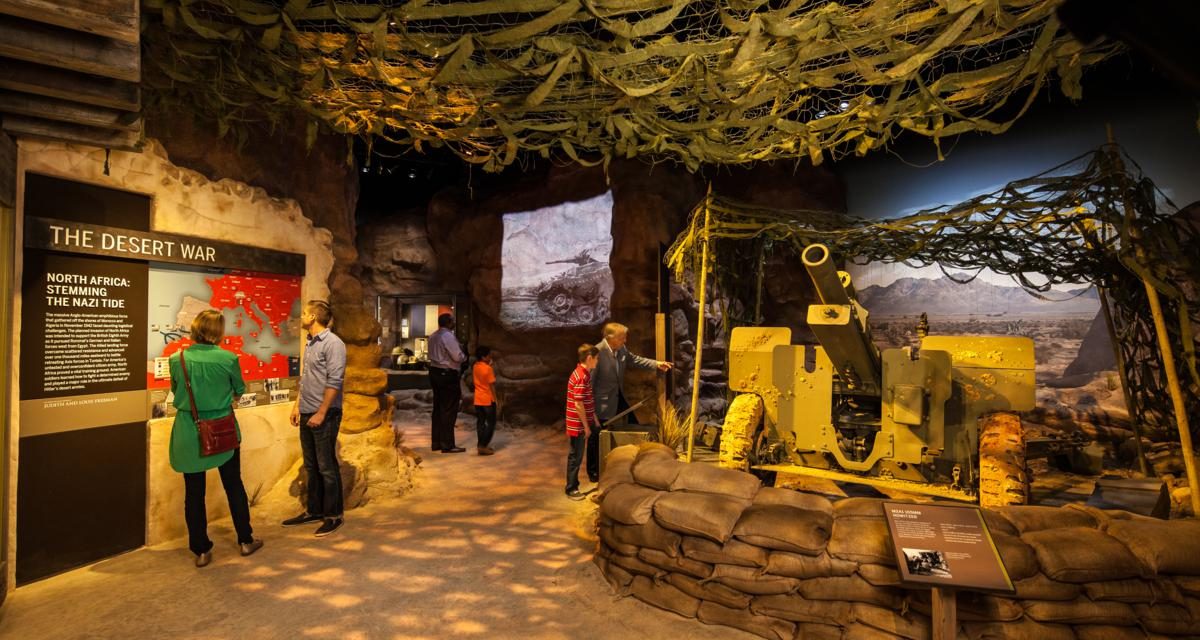 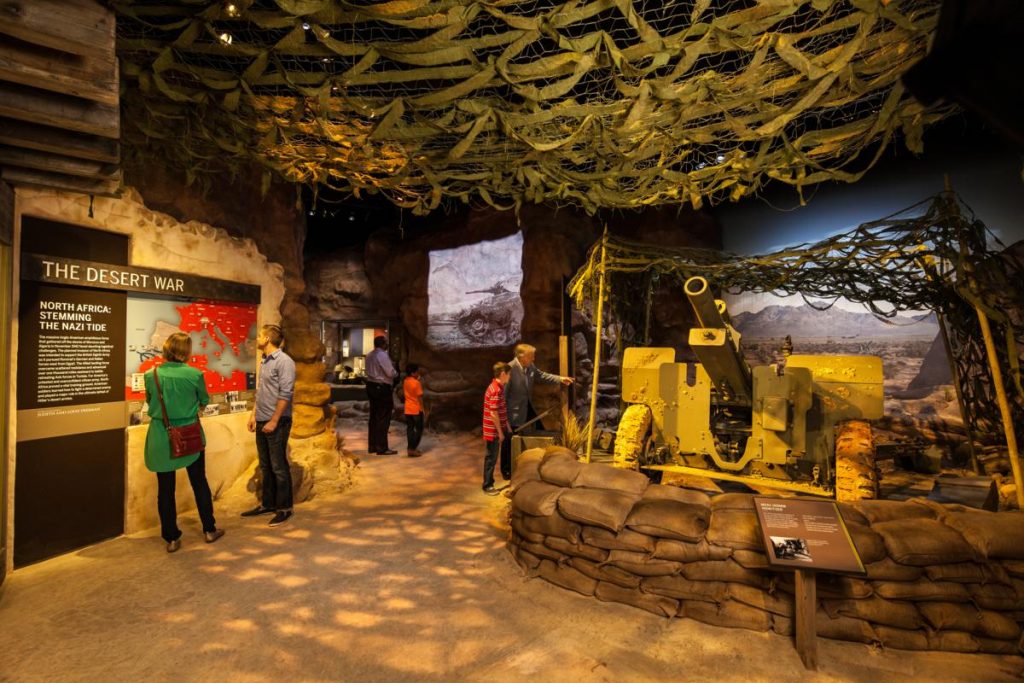 The Solomon Victory Theater presents a 4D experience of World War II narrated by Tom Hanks. Beyond All Boundaries features dazzling special effects and first-person accounts read by Brad Pitt, Toby McGuire, Gary Sinise, Patricia Clarkson and others. The Final Mission: USS Tang Submarine Experience invites visitors to board the most successful submarine in WW II for its fifth and final voyage. You’ll relive the USS Tang’s last epic battle and garner a deep appreciation for those who served.

The Louisiana Memorial Pavilion, the museum’s original building, houses the newest permanent exhibit, The Arsenal of Democracy: The Herman and George Brown Salute to the Home Front. Visitors have an opportunity to connect with the men and women who served on the home front. Highlights of the exhibit are the video, the Gathering Storm Gallery, a House Divided and America Besieged. As in each exhibit area, there are special exhibits rotating regularly.

The Road to Tokyo galleries chronicle the grueling path from Pearl Harbor to Tokyo Bay and the challenges of a war in the Pacific. The innovations, courage and sacrifices of Americans who forged a road to an ending of the war are displayed. Highlights include Facing the Rising Sun, Briefing Room: Japanese Onslaught, The New Naval Warfare: First Blood and Guadalcanal: Green Hell.

Road to Berlin: European Theater Galleries tell the story of sacrifices and strategies in America’s campaign to defeat the Axis powers. Personal items spread over actual Normandy sand and a walk through dense hedgerows provide glimpses into the human side of war. Highlights include a European/Mediterranean Briefing Room, Desert War-North Africa, Invasion of Sicily and Italian Campaign.

The largest and most complex assault in history is portrayed in The D-Day Invasion of Normandy galleries, which take the visitor from D-Day Planning through the D-Day Beaches. Discover the challenges Operation Overload commanders faced in breeching the fortifications that awaited the Allies. See German and American weapons, uniforms and gear. Experience the most decisive day in WWII—June 6, 1944—when you hear from the men who fought on the Normandy beaches.

Complete your time in the exhibits by viewing the U.S. Merchant Marine Gallery, dedicated to the civilian merchant marine sailors who risked their lives transporting war material overseas.

Groups of 10 or more receive group rates for self-guided tours of the museum and BB’s Stage Door Canteen. A full-day visit is recommended. For more information, visit nationalww2museum.org.

Reports of Mardi Gras-type celebrations with music, masks and dancing are recorded in New Orleans as early as 1730. However, it was 1896 when a group of businessmen gathered in the French Quarter, organized a secret society to celebrate Mardi Gras and founded the Mistick Krewe of Comus, New Orleans’ first krewe (an organization that puts on a parade or ball for the Carnival season). Parades may have been cancelled due to world wars, but there has always been a celebration.

The Mardi Gras World story begins 36 years after that meeting in the French Quarter when Roy Kern and his son Blaine built their first Mardi Gras float on the back of a mule-drawn wagon. Years later, while working on a hospital mural, Blaine’s talent caught the eye of a surgeon who was the captain of a local krewe. Blaine was invited to design and build floats for his krewe. With that, Kern Studios was founded in 1947 and soon became the leading float designer and builder. 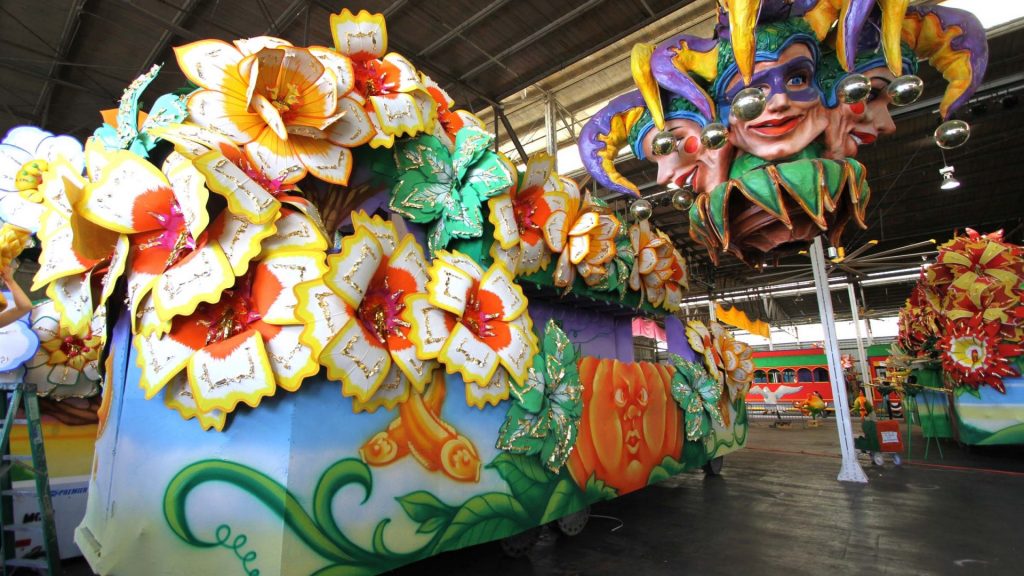 Adamant about his craft, Blaine Kern traveled throughout Europe to apprentice under some of the Continent’s premier float builders. He became stimulated by the European style, which featured extravagant concepts and animation. With fresh ideas he returned to New Orleans and began creating spectacular floats. His contributions to some of New Orleans’ biggest parades earned him the name “Mr. Mardi Gras.”

New Orleans visitors and locals seeking a sneak peek at the floats began requesting tours of Kern Studios. In 1984 Mardi Gras World was opened to provide visitors a look behind the scenes at the Mardi Gras celebration. One of New Orleans’ busiest attractions, it offers package opportunities for traditional tour groups, field trips, family reunions, private parties and corporate groups.

New Orleans’ Mardi Gras is legendary, and there’s only one place to get an inside look, Mardi Gras World. Visitors learn about the festival’s history, try on a costume, get up close to the floats that roll through the streets and walk through the float den where artists bring their visions to life.