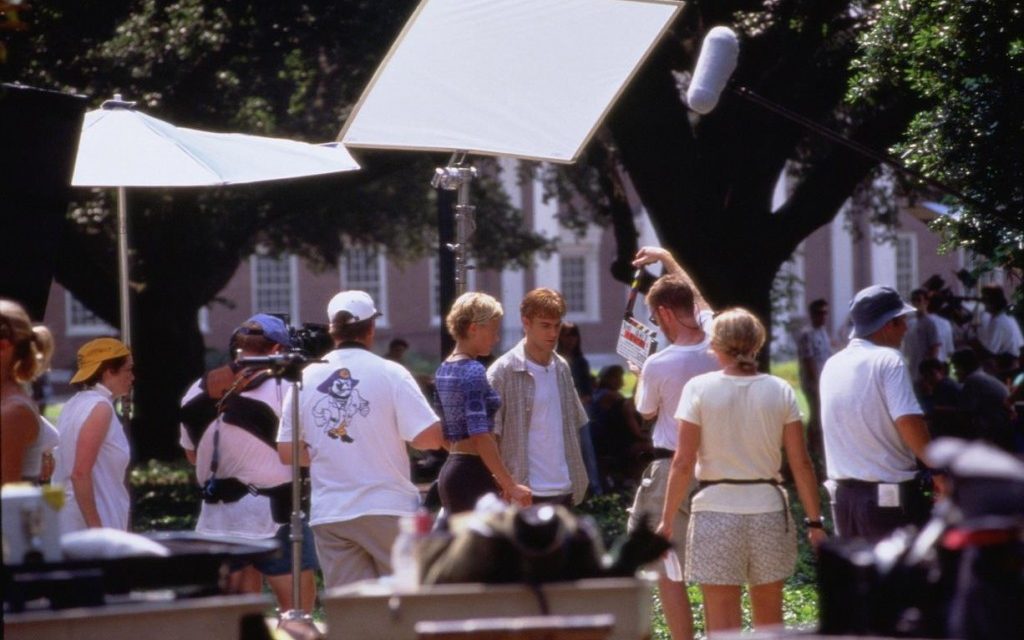 From Louisiana to Virginia, tours spotlight Southern towns that have served as filming sites for popular movies and TV series.

We have a passion for film and television entertainment. How often have we heard, “What’s on TV tonight?” or “How did you like the movie?” Both the big and small screens are part of our culture, and we start the learning process at an early age. Interest in movies and television has not been lost on the group travel industry and Southern destinations in particular.

Every Southern state has a film office, as well they should. For locations, the South has so much to offer. A delightful blend of large cities and rural towns can satisfy any script. From mountains and beaches to rivers and fields, there’s the perfect location for any story.

Groups from all over the country and the world visit Southern destinations. It just makes sense they’ll want to see where popular shows and movies were filmed. Here’s a walk through the Southern states and a chance to look at a few locations you might recognize and the tours they offer.

Reality television shows are hot. It seems they’re on every channel and I mean every channel. However, with 14 million viewers tuning in to A&E every Thursday evening, Louisiana’s Duck Dynasty is the hands-down leader. The Robertson family might be in the business of manufacturing duck calls, but it’s their adventures, humor and faith that attracts viewers. The show has put the Monroe/West Monroe communities on the entertainment tour map.

Bob Cline of U.S. Tours has created a series of trips around Duck Dynasty. If you’re a fan, there’s a package for you. He’s combined a “Duck Commanders Hometown Tour” with New Orleans, Lafayette, Memphis and other Southern locations.

On a visit to the Robertsons’ hometown, a local guide boards the coach. You’ll track many of the spots seen in various episodes. Of course, you’ll visit the Excalibur Family Fun Center for a chance at the purple gorilla. The Corner Coffee Shop is the stop for gourmet coffee and Danken Trail serves outstanding Southern BBQ. A stop at the new Duck Commander Store and Warehouse is a must for all that’s camo. Remember when Willie thought of buying a working vineyard? You’ll visit the site, then close your day with dinner at Willie’s Duck Diner for some of the family’s favorites. (monroe-westmonroe.org/index.cfm?c=49)

Published as a book in 2009, The Help became an award-winning film in 2011. The story is set in Jackson, Miss. during the early 1960s at the height of the state’s civil rights struggles. There are two driving tours available, “The Help in Belhaven Neighborhood” and “The Help in Jackson.” You should begin with the Belhaven tour and continue with the Jackson tour. Belhaven has that old Jackson look and many of the venues included in the book are part of the tour. Film locations are included in the Jackson tour.

Probably the most recognizable location is Brent’s Drugs, where the soda fountain is still operational. “The Happy Shopper” mural between Brent’s and McDade’s Grocery is evidence of the film. Some signs and prints from the film remain on Stop 27 Fondron, North State storefronts. Tours are available at Stop 21, Mississippi State Capitol; Stop 24, Governor’s Mansion; and Stop 30, Medgar Evers Home and Museum. The Fairview Inn, Stop 1 in Belhaven, has a well-deserved reputation for gourmet dining. (visitjackson.com/discover-jackson/itineraries)

The Atlanta History Museum has developed a series of options. “Trails & Tails” takes the visitor on a 40-mile journey uncovering the facts and fiction between characters, locations and set stories. “Petticoats, Pansy & Plantations” introduces you to wardrobe items and props from movie scenes. Stops along the way include the Marietta Gone with the Wind Museum, Margaret Mitchell House, Atlanta-Fulton Public Library System Central Library, Oakland Cemetery and the Road to Tara Museum. (atlantahistorycenter.com/explore)

North Carolina has long been a premier location choice and sports the largest production facility east of Hollywood, EUE Screen Gems Studios in Wilmington. Recently, Moviemaker Magazine recognized Wilmington as one of the best small cities with a population between 100,000 and 500,000 for filmmakers to work in.

Of the more than 400 projects done in Wilmington and the Cape Fear area, two WB television series received popular acclaim. Dawson’s Creek enjoyed six seasons before concluding in 2003. Wilmington doubled as the small fictitious town of Capeside. From 2003-2011 WB’s One Tree Hill filmed in Wilmington. The guided “Hollywood Location Walk of Old Wilmington” and the fun “Hollywood Segway Tour” are great ways to explore the locations. (hollywoodnc.com/hollywood_location_walk.html)

As the 150th anniversary of the American Civil War winds down in 2015, Virginia again takes center stage. The siege of Richmond is coming to an end. The Confederates are withdrawing. The city has been laid to waste. The end of the brutal conflict is near. “Lincoln’s Last Journey” welcomes visitors to follow in the footsteps of the President as he visits General Grant at the Union Army front lines, March 23 to April 4, 1865. Scenes from Lincoln were filmed at locations throughout the Richmond and Petersburg areas.

Your visit begins at City Point, now Hopewell, where Grant made his headquarters at Appomattox Plantation. President Lincoln arrived on the River Queen to see thousands of tents serving as barracks and a hospital with 6,000 beds. Moving on to Petersburg, the site of a 10-month siege cutting off supply lines, you’ll visit the Wallace House. It was here that Lincoln and Grant had their next-to-last meeting. In Richmond take a walking/riding tour that follows the path Lincoln and his son Tad took as they witnessed the destruction caused by the Evacuation Fire. (visitrichmondva.com)

Beaufort movie history began with Pat Conroy’s The Great Santini, followed by popular films such as The Big Chill, Forrest Gump, GI Jane, Platoon and Forces of Nature. On “Beaufort Movie Tour” see where the films were shot and the places the casts and crews spent their free time. (beaufortmovietour.com)

We’re going off the script, slightly, but a feud that continued for 23 years and is still a subject of interest 125 years later almost brought Kentucky and West Virginia to war. The History Channel’s three-part Hatfields & McCoys mini-series brought critical acclaim. Although filmed primarily in Romania with the Carpathian Mountains serving as the Appalachians, the floodgates were open as interest in the feud and the area exploded.

Bill Richardson, an associate professor at West Virginia University, has spent 15 years researching the feud and is often available to step on coaches and lead visitors along the Hatfield & McCoy Driving Tour that threads portions of West Virginia and Kentucky. You’ll visit the actual site of the election-day death of Ellison Hatfield and the home of Ranel McCoy where two of McCoy’s children were killed in a Hatfield raid. However, the real treat of the tour is Richardson’s passion for the story he loves to share. (hatfieldmccoycvb.com)

Arkansas native and best-selling author John Grisham was born in Jonesboro and lived throughout northeast Arkansas as a child. Portions of Grisham’s The Firm were filmed in West Memphis at the Marion Hotel, which served as an apartment building and as Southland Gaming and Racing. Although I’m certainly a fan of John Grisham, it’s an earlier movie and the locations that deserve sharing.

A Soldier’s Story, released in 1984, featured a prominent cast including Denzel Washington and Patti LaBelle. The story is set in a small Louisiana town where a black master sargeant is shot and killed just outside the local Army base. A military lawyer is sent from Washington to investigate. The baseball scenes were filmed at historic Lamar Porter Field in Little Rock. You can still catch a game there. Clarendon, Ark. is the set for the Louisiana town and Fort Chaffee in Fort Smith, Ark. served as the Army base. As a side note, there was a famous haircut done at Fort Chaffee. Find out in a visit to its Barbershop Museum.

If there’s one travel destination that’s on fire right now, it has to be Nashville. The weekly musical drama series Nashville can be seen Wednesday evenings on ABC. It’s all about the music industry and all about Nashville. From street performance scenes to the Bluebird Cafe and Ryman Auditorium staging, you’ll recognize many of the episodes.

Get ready for two additional made-for-television series. Brand new this year is Nashville Wives, a look at the spouses of some of Nashville’s biggest music talents. Not to be outdone, MTV is in casting through early April for the new Kids of Nashville. (visitmusiccity.com)

Many scenes in the The Prince, an American gangster movie to be released in 2014, were filmed in Mobile, Ala., though the story is set in Las Vegas. It stars Bruce Willis, John Cusack, South Korean singer Rain, the rapper Curtis “50 Cent” Jackson and John Patric. Locations included the Battle House Hotel and surrounding area and Alabama’s tallest building, the RSA Battle House Tower. (mobile.org)

Entertainment and tourism go hand-in-hand and it can be a great way to fill up the coach. We want to see where it was filmed, how the cast lived and where they ate. Savvy operators and DMOs should certainly explore the opportunities—and they’ll have fun doing it.