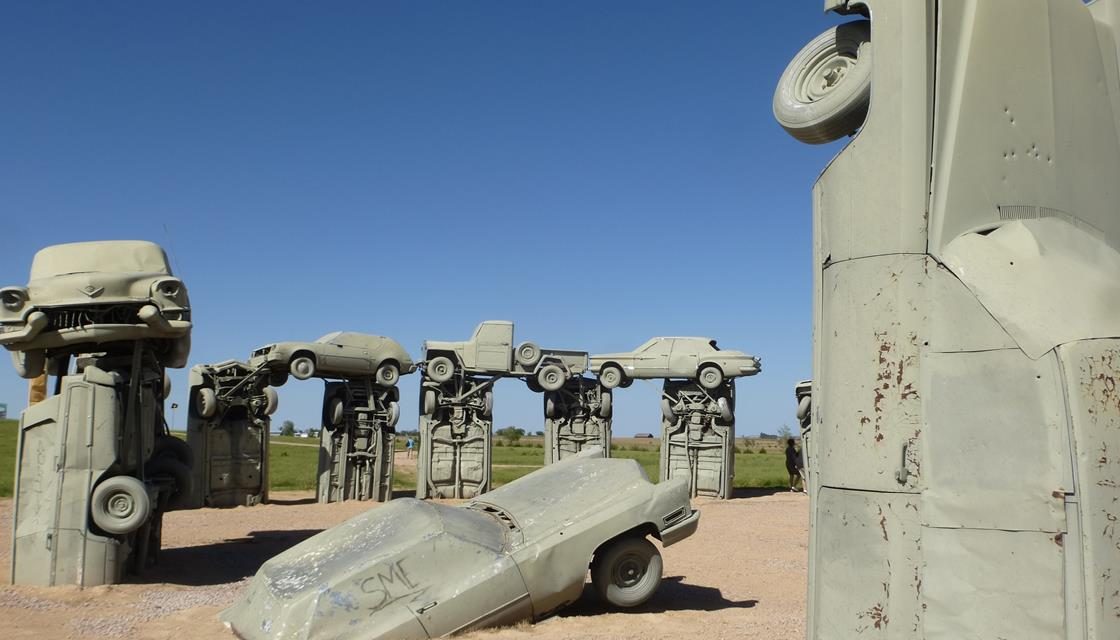 Look at a map of Nebraska and you’ll see there aren’t that many towns on the western side, at least compared to the eastern and central parts of the state. The largest city, Scottsbluff, has a population of only 15,000, and many communities number in the hundreds. 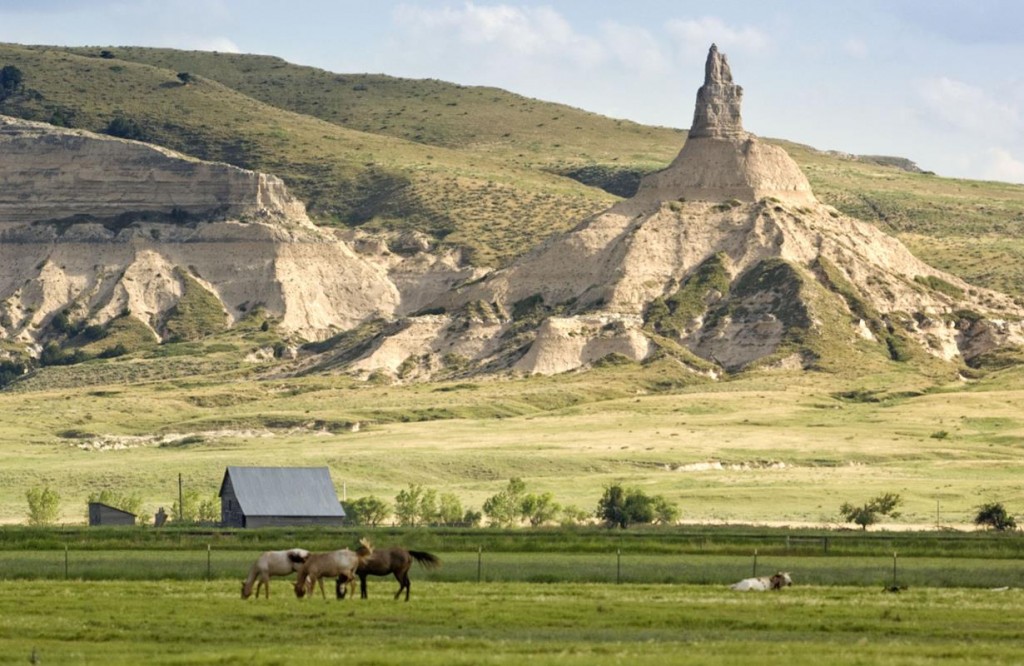 Traveling through the high plains of Western Nebraska, you will find rolling grasslands. barbed-wire fences and black angus cattle aplenty, along with corn fields here and majestic buttes there. Your main impressions of Nebraska’s Panhandle center on wide-open space and the frontier feeling conjured up by landscapes reminiscent of the American West. But this is the Midwest. Or is it?

Perusing the map also reveals that Colorado, South Dakota and Wyoming neighbor Nebraska’s western reaches. On several occasions during our trip, we were just miles from the borders of all three. In fact, the group trip to Western Nebraska started and ended in Denver, the most convenient airport. Rapid City, South Dakota would be the other choice for those flying in.

Culturally, the Panhandle aligns itself with the West. Many of the sightseeing attractions, drawing on pioneer history and the covered wagons that rolled along the Oregon Trail, reflect that westward slant. It’s possible to see the original wagon ruts in several places, though grass had covered them up at two sites we visited in June, leaving it up to our imagination.

Chimney Rock, a tall spire rising out of a dome-like outcropping, was the natural landmark most often mentioned in the journals and diaries of settlers on the westward trek. In the U.S. Mint’s quarter series, the iconic formation is pictured on the back of the Nebraska coin.

From the visitor center’s terrace at Chimney Rock National Historic Site near Bayard, tourists take photos of the rock (a hoodoo in geological lingo) that signaled the end of the prairie for pioneers on the Oregon, Mormon and California trails. They could see it two days before, from 37 miles away. One of the half-million settlers who passed it called Chimney Rock “the most remarkable thing I ever saw.”  Many carved their initials on it. A dirt road near the visitor center provides access for those who care to walk through grass for three-fourths of a mile and climb Chimney Rock, but beware of rattlesnakes. The visitor center has museum exhibits and a video that tells the story of the great migration West. 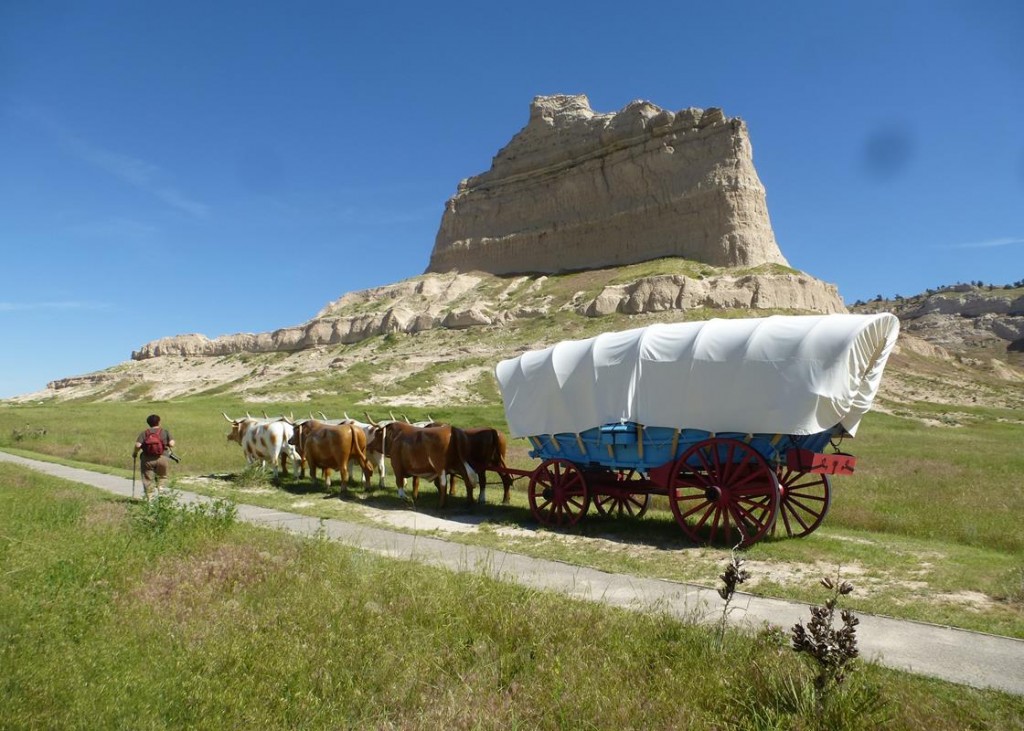 Closer to the Wyoming border, more stories of westward movement come alive at Scotts Bluff National Monument, another landmark that guided intrepid settlers. A series of wind-sculpted, clay-and-sandstone buttes, an escarpment rising 800 feet above the Platte River Valley, could easily be a Western movie set.

Visitor center exhibits describe the hardships of the long Oregon Trail journey that started in St. Joseph or Independence, Missouri. The very sight of the bluffs, you learn, was a psychological reward for those who had trudged for days (15 miles a day) through endless prairie on their creaking wooden prairie schooners. Wrote one woman about the tedious trek: “How I wish the Indians would attack. I am so bored.”

During the summer at covered wagons outside the Scotts Bluff visitor center, living history interpreters describe life on the trail and cook up vittles over the fire. You might have a chance to sample hard tack—tasteless, rock-hard biscuits made from flour and water—but don’t break your teeth. The wagons and costumed characters provide great photo opportunities.

Cars and buses can ascend to the top of Scotts Bluff, where the views stretch 100 miles. You’ll spot Chimney Rock, 23 miles away. From the summit, one can make the 35-minute hike back to the visitor center on a trail flanked by juniper, ponderosa pines and walls of rock.

Scotts Bluff National Monument is three miles west of the twin towns of Gering and Scottsbluff. Cheyenne, Wyoming is an hour and a half away. At the far eastern end of Nebraska lies Omaha, an eight-hour drive.

Sitting on 100 acres with Scotts Bluff as a backdrop, the Legacy of the Plains Museum was formed in 2013 from the Farm & Ranch Museum and North Platte Valley Museum, both of which were in Gering. The first phase of exhibits opened this past fall. The museum will cover everything from pioneer trails, sod houses and Native American crafts to livestock ranches, irrigation and the area’s sugar beet industry. You can see sugar beets and other crops being grown on the museum grounds. (Tours can be arranged at the two local sugar beet factories that remain of the seven that flourished in the 1920s.) 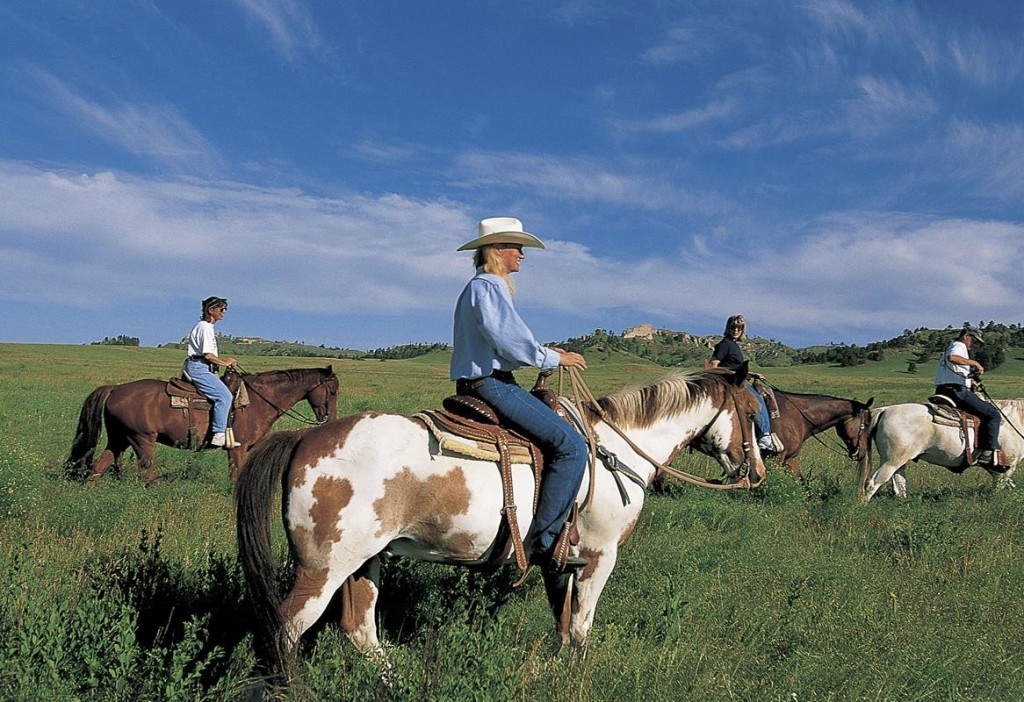 Fort Robinson State Park, Nebraska’s largest, is a gem in the state’s northwest corner, three miles from the town of Crawford. Formerly a frontier military outpost, it commands a scenic setting in Pine Ridge Country, a land of canyons, grassy hills, and buttes and ridges crowned with ponderosa pines.

Established in 1878 to defend white settlers and cattle ranchers against possible Indian troubles, Fort Robinson became a cavalry post in 1887 and later developed into the U.S. Army’s largest training, care and breeding center for horses and mules. Known for its lively social life in the 20th century, it was called the “Country Club of the Army,” with a calendar featuring parties, polo matches, fox hunts and other equestrian events. Two museums on the grounds showcase the fort’s history and area geology. 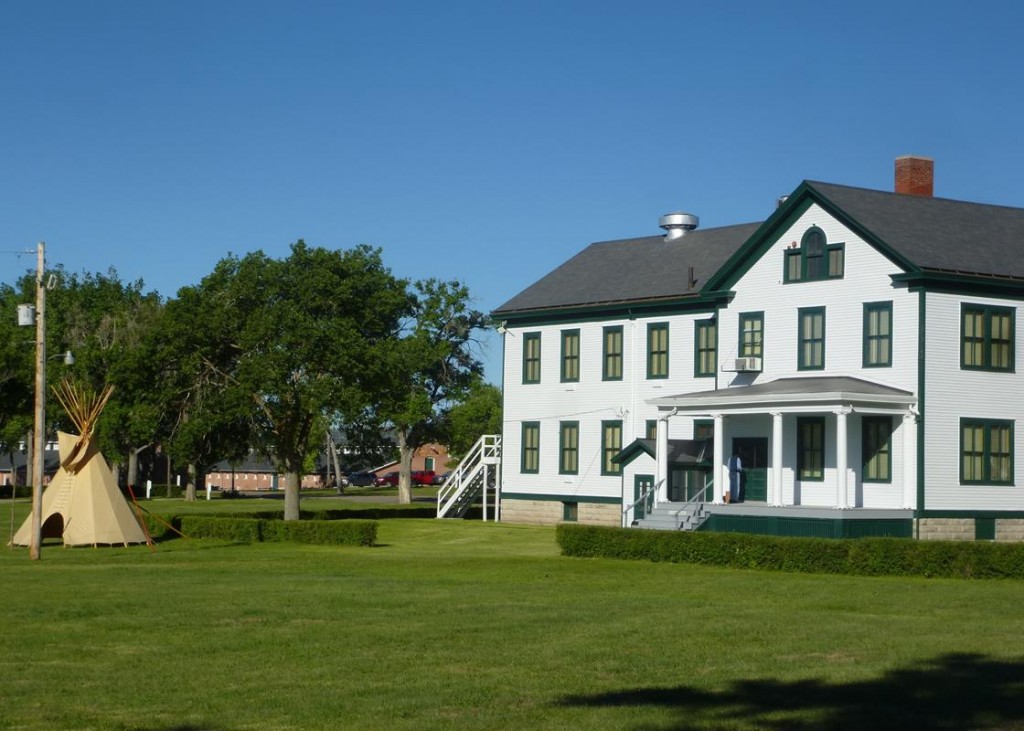 The Grounds of Fort Robinson

Horses are still very much a part of life at Fort Robinson. Besides horseback trail rides, horse-drawn wagon and stagecoach rides are available. A free rodeo put on by the wranglers and their kids is staged on Thursday nights in summer.

The Post Playhouse, the former quartermaster’s depot, offers nighttime entertainment from late May to mid-August. This summer’s playbill at the professional repertory theater will feature Grease, All Shook Up!, A Man of No Importance, The Best Little Whorehouse in Texas and Rodgers + Hammerstein’s Cinderella.

The Lodge, built in 1909 as an enlisted men’s barrack, is the focal point of the park. It offers 22 rooms with private bath and houses the Fort Robinson Inn Restaurant, whose Western theme is carried out through the log tables and chairs, plus wall decorations like rifles, spears, saddles, chaps, portraits of Indians and photos of officers. The “Lunch in the Barracks” menu features a buffalo cheeseburger, buffalo tacos and hot buffalo sandwich with mashed potatoes and gravy. Meal options at Fort Robinson also include chuck wagon buffalo stew cookouts and hayrack breakfast rides.

In addition to the Lodge, accommodations are in kithen-equipped cottages and stately homes that once served as officers’quarters. Commanche Hall, perfect for family reunions, has 14 baths and sleeps 60.

Avid sightseers, especially those into fossils and geology, will want to make excursions to Toadstool Geologic Park, famous for its badlands formations; Agate Fossil Beds National Monument, which also has an impressive collection of Indian artifacts; and Hudson-Meng Education & Research Center, site of the largest extinct bison bone bed in the world. 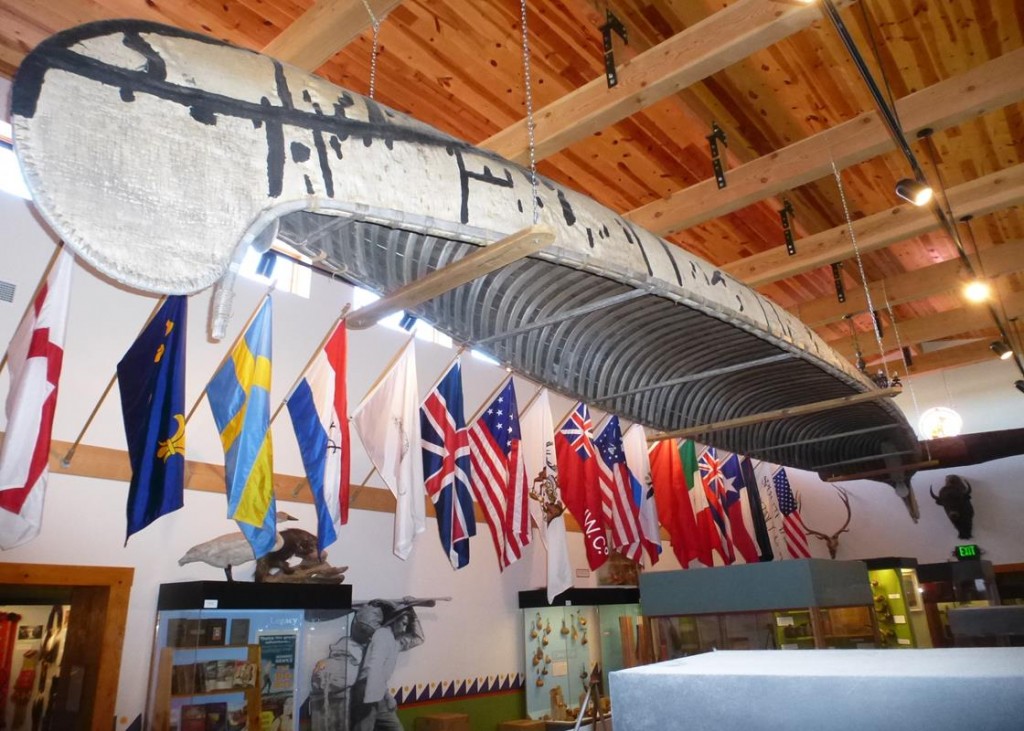 Museum of the Fur Trade in Chadron

History buffs will enjoy the Museum of the Fur Trade in Chadron, while literature fans will be intrigued by the Mari Sandoz High Plains Heritage Center at Chadron State College, where exhibits shed light on author Mari Sandoz (1896-1966), who wrote powerfully of life in the grass-covered sand hills that cover a quarter of Nebraska. 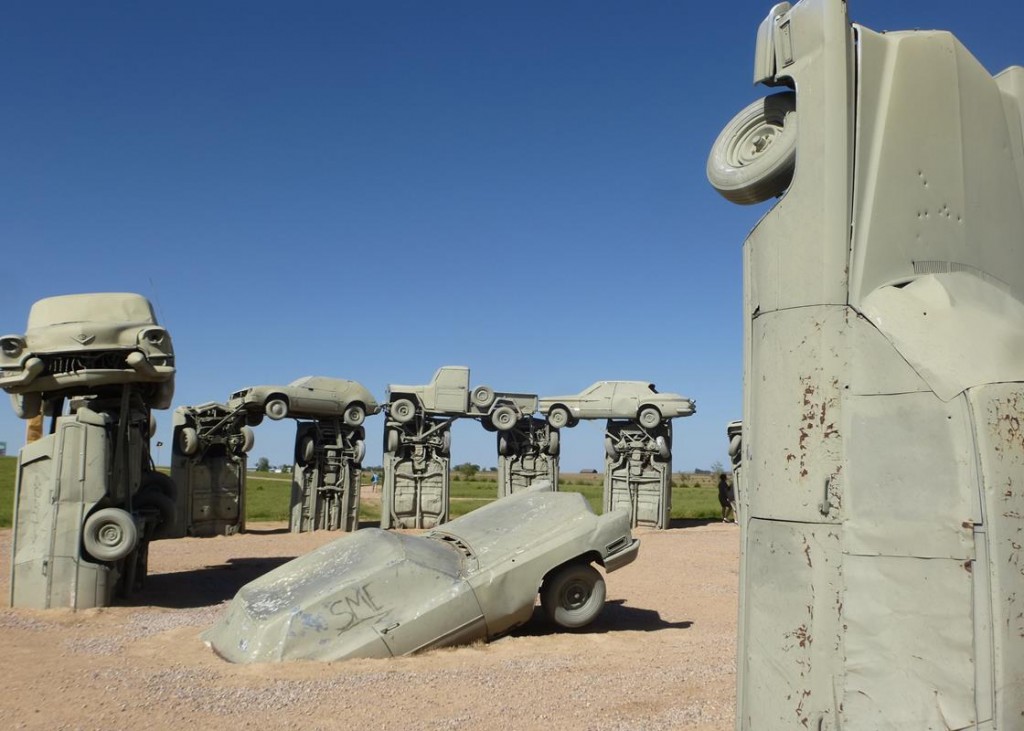 The town of Alliance, on the western edge of the sand hills, has two major attractions. The most photogenic is Carhenge, a whimsical replica of England’s Stonehenge built from 38 vintage cars, all painted gray. The state-of-the-art Knight Museum and Sandhills Center is a treasure house of local ranching, farming, railroad and Native American history.

In the southern reaches of Western Nebraska, along Interstate 80, are several group-friendly places. Sidney is home to the flagship store of locally-owned Cabela’s, the “World’s Foremost Outfitter.” After Omaha’s Henry Doorly Zoo, it is Nebraska’s most visited attraction. Besides offering every kind of gear and clothing imaginable for outdoor activities, it dazzles customers with its displays of mounted animals, even an elephant bagged by Dick Cabela in 1989. The cafe offers boar, bison and elk deli sandwiches, and there’s a room on the mezzanine that groups can use. The National Pony Express Monument is on the Cabela’s campus, and minutes away are hotel chains like Comfort Inn, Days Inn and Hampton Inn. 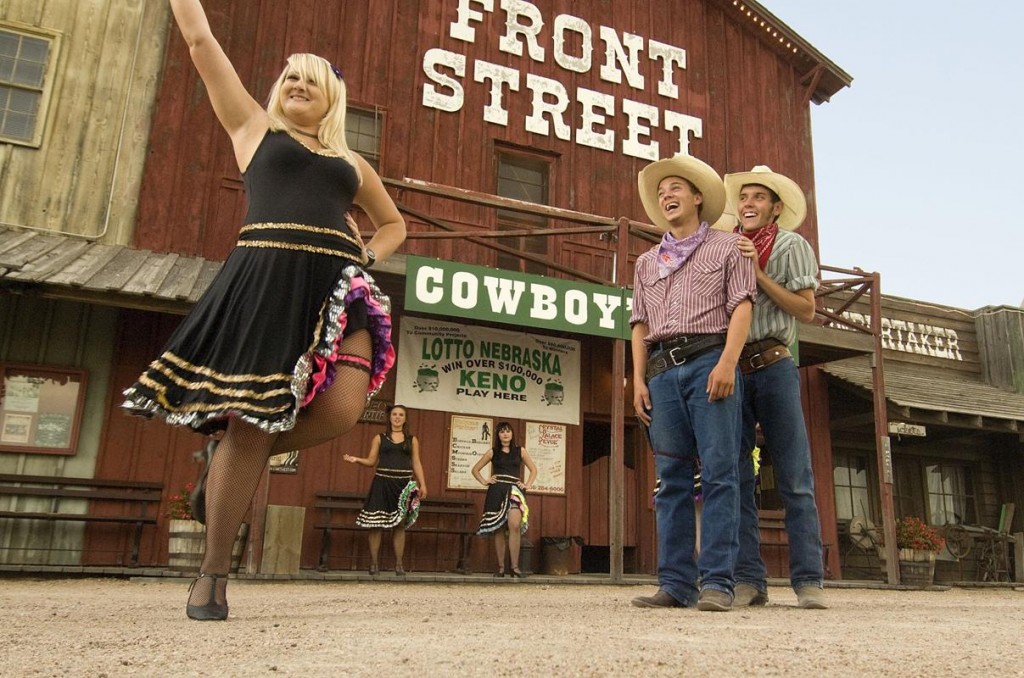 Ogallala, another I-80 town, abounds with Wild West history. Favorite stops include Boot Hill cemetery, dating from the 1870s, when Ogallala was a rip-roarin’ cow town at the end of the Texas trail drives. Here in Nebraska’s “Cowboy Capital” you can enjoy Western entertainment at Front Street, famed for its Crystal Palace Revue and Shoot Out, complete with dance hall girls. Groups also visit the Petrified Wood & Art Gallery, where 86-year-old twins Harvey and Howard Kenfield display their creations made from small pieces of petrified wood along with Native American and other Western art.

While Nebraska’s Panhandle may not have sights as famous as Mount Rushmore or Yellowstone National Park, groups will find plenty to marvel about on the high plains where the Midwest meets the West.