Touring Fort Wayne, Indiana in the Past Lane 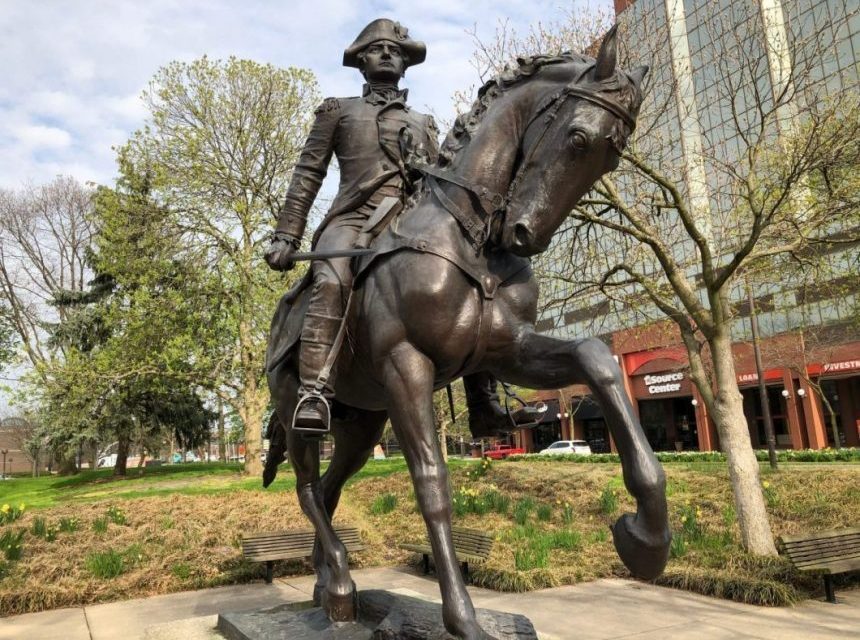 Museums, well-preserved buildings, and other group-friendly attractions showcase the rich heritage of this northeastern Indiana city

History hounds will find plenty to sniff out in Indiana’s second-largest city, thanks to a bounty of historical attractions, most of them within easy walking distance of each other downtown. The city’s nationally famous genealogical research center will even shed light on your own family’s history, whether you’re from Fort Wayne or not.

The “Fort” in Fort Wayne comes from the succession of frontier military forts that were constructed in the 18th and early 19th centuries at the spot where the St. Marys and St. Joseph rivers join to form the Maumee. Downtown, near the site of the last fort, stands the Old Fort, an impressive replica of the wooden post built in 1815-1816 and decommissioned soon after. The grounds are open to exploring daily; living history demonstrations and reenactments are scheduled on select weekends. 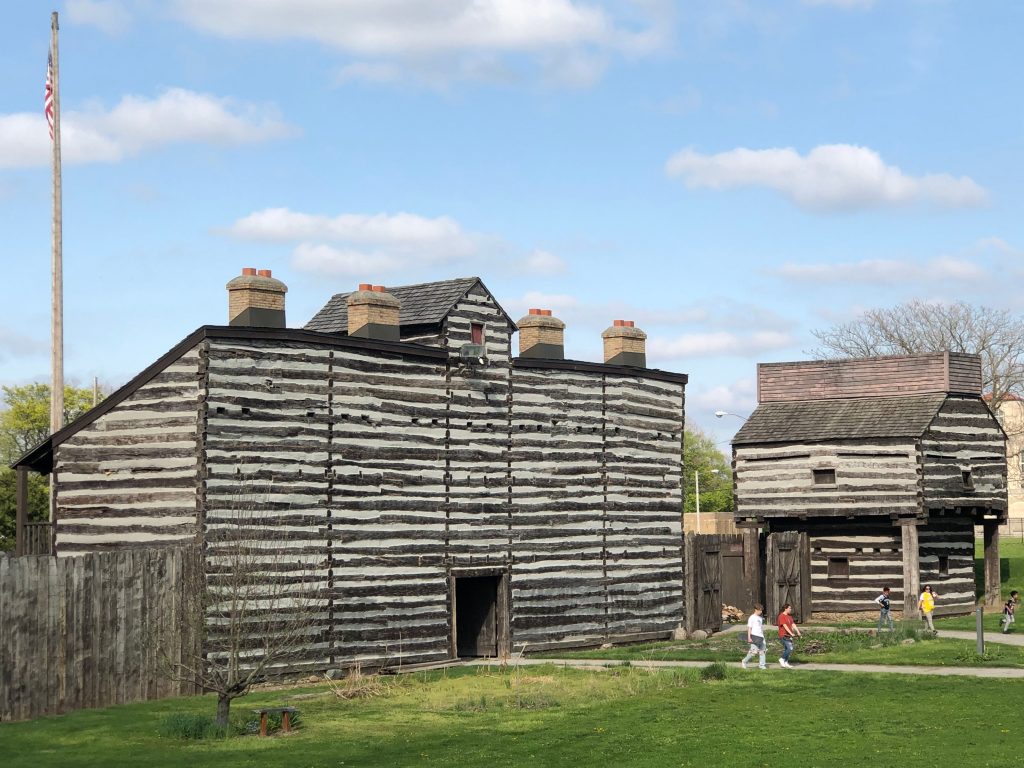 A few blocks from the Old Fort, in Freimann Square, is another good photo op—an equestrian statue of General “Mad” Anthony Wayne, the Revolutionary War hero for whom the city is named. After Wayne’s 1794 victory at Fallen Timbers in the Northwest Indian War against Native Americans and their British allies, he established the first American fort at the three rivers, thus founding the settlement of Fort Wayne the same year.

Downtown’s History Center, a museum housed in the castle-like, 1893 City Hall building, tells the story of Fort Wayne through artifacts like the camp bed used by General Wayne throughout the Revolutionary War and in Indiana military campaigns. Exhibits touch on subjects as diverse as canal and railroad history, the local Miami people, women’s achievements, and refugees who arrived in Fort Wayne from Southeast Asia in the late 20th century. In the basement, you can take a selfie in the cells of the old city jail, which was used until 1971. 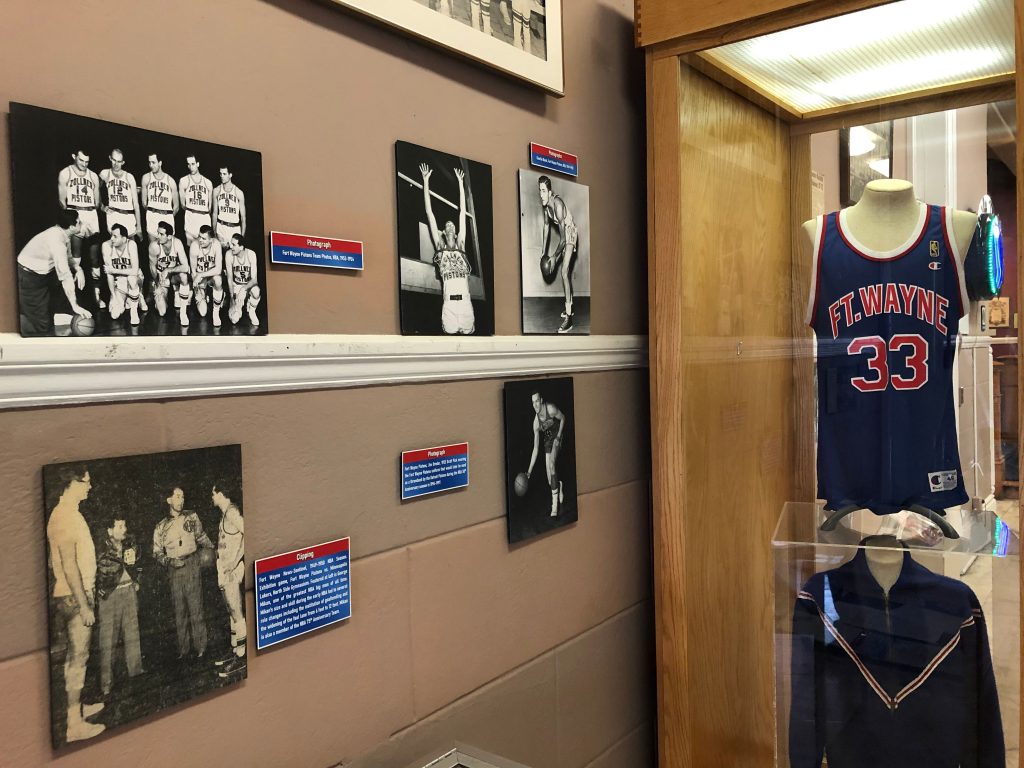 Basketball fans browsing the History Center are surprised to learn that today’s NBA Detroit Pistons began life in 1937 as the Fort Wayne Zollner Pistons, originally an industrial league team sponsored by Fort Wayne’s Zollner Corporation, a foundry that manufactured pistons for vehicle engines. The Pistons moved to Detroit in 1957.

The Allen County Public Library, also in the heart of downtown, is home to the Rolland Center for Lincoln Research, a gleaming new exhibition space displaying a wealth of Abraham Lincoln memorabilia. Free of charge and available for group tours, it artfully marries traditional exhibits and digital technology. The center opened on January 10, 2022.

The collection of Lincoln materials consists of documents, letters, photographs, books, manuscripts, and newspapers. From 1928 into the 1990s, the treasures had been housed in Fort Wayne at the corporate headquarters of Lincoln National Life Insurance Company (now Lincoln Financial and based in Philadelphia but with many employees still in Fort Wayne). 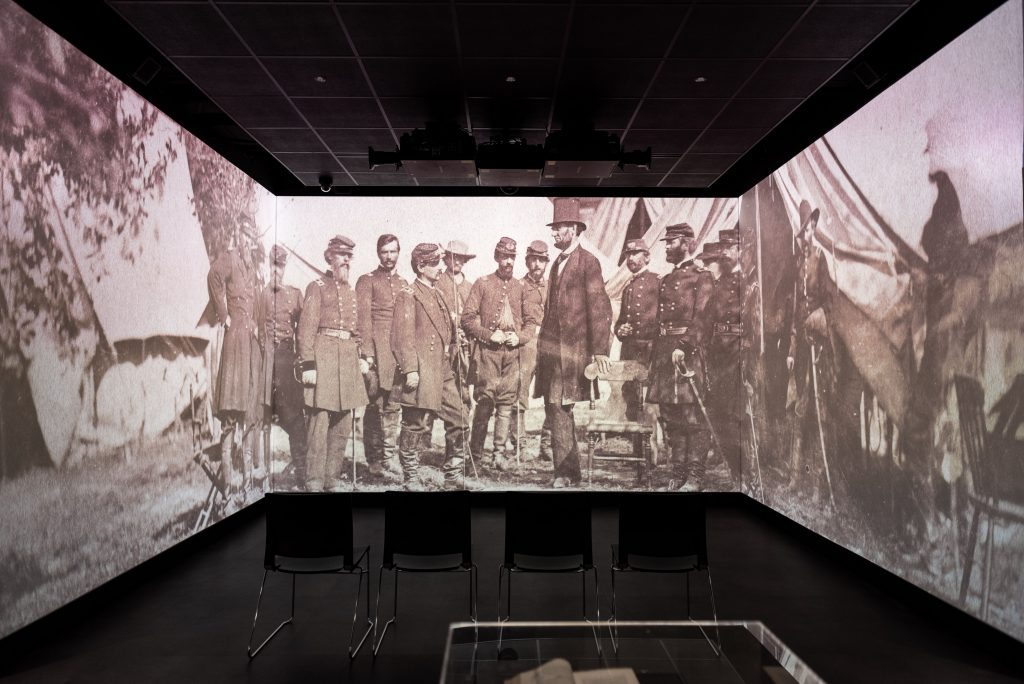 In 2008 the collection, the largest private holding of Lincoln-related memorabilia, was divided between the Indiana State Museum and Allen County Public Library. The museum got items like clothing, fine art, and sculptures, while the library received the paper items, including photographs in the Lincoln Family Album, which had been handed down through generations. Kiosks allow visitors to click on a displayed picture or artifact and get details on it. A projection room with a three-sided screen features a presentation of Lincoln’s life. For an account of the president’s assassination in 1865, see the New York Herald’s front page, one of 700 items on display in a collection that totals 20,000 pieces.

Digging for Your Family Roots

If it’s your own family story you’re interested in, get ready to do some homework at the Allen County Public Library’s Genealogy Center. In addition to the nation’s second-largest largest physical collection of genealogical materials, the center provides free access to the top seven licensed genealogical databases, plus several databases available only to libraries. You can view hundreds of thousands of files on microfilm and access holdings from the Family History Library in Salt Lake City. 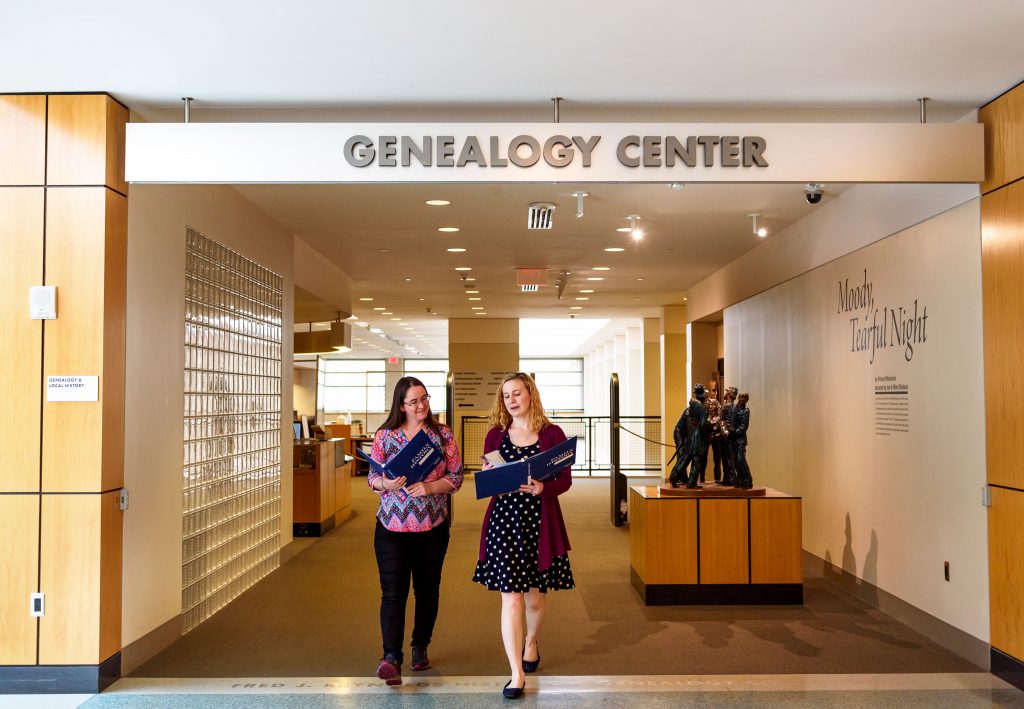 Researchers, visitors, and the library’s professional genealogists have access to 200 million newspaper pages, a growing audio collection, and some 1.1 million books, including 70,000 compiled family histories and one of the largest collections of city directories. There are census records, extensive passenger lists, and military records from the Revolutionary War to the present.

The center has 28 PCs for public use and four scanners/copiers. Scans and photocopies are free, and the scanners have software that can clean up or lighten or darken family photos brought in.

Prior to the pandemic, 60,000 to 70,000 people from outside of Fort Wayne sought help with their ancestry searches. The genealogy specialists will never turn anyone away, but for the best results, it’s wise to do some homework before your visit to the library, which is in the heart of downtown. Those with the attitude “I’ll figure it out when I get there” are not as successful as those who come in with at least some preliminary information on their forebears. 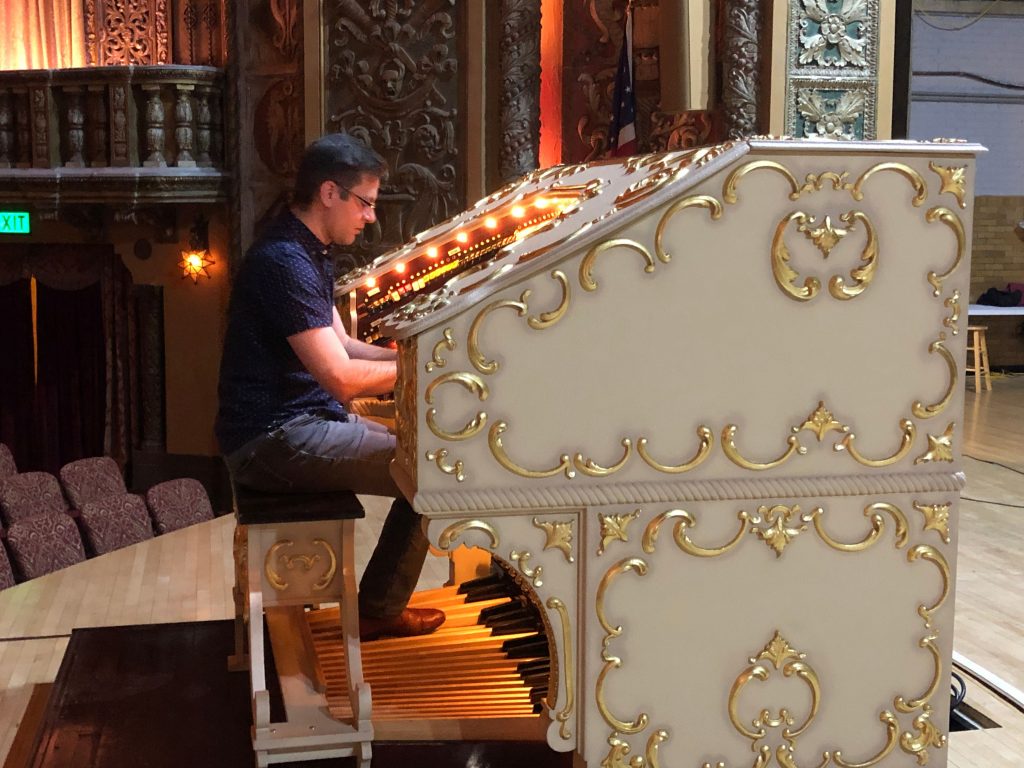 Those who appreciate the grand theaters of yesteryear will want to take a tour or catch a performance at downtown Fort Wayne’s lovingly restored Embassy Theater, a majestic 1928 vaudeville/movie house. Opulently decorated with marble, mirrors, mosaic tile, and plasterwork, it was saved from the wrecking ball by concerned citizens in the 1970s. A group tour can include a recital on the rare Page orchestral pipe organ. The Embassy hosts concerts, comedy acts, and touring Broadway productions.

Downtown’s grandest building is the 1902 Allen County Courthouse. Built of Indiana limestone with Vermont granite columns at each entrance, the green-domed, Beaux Arts-style beauty is regarded as one of the finest courthouses in the U.S. An $8.6 million restoration was completed in 2002; another $2.2 million was spent to develop the adjacent Courthouse Green, a project that included purchasing the land and demolishing existing buildings. The courthouse was placed on the National Historic Landmark list in 2003. 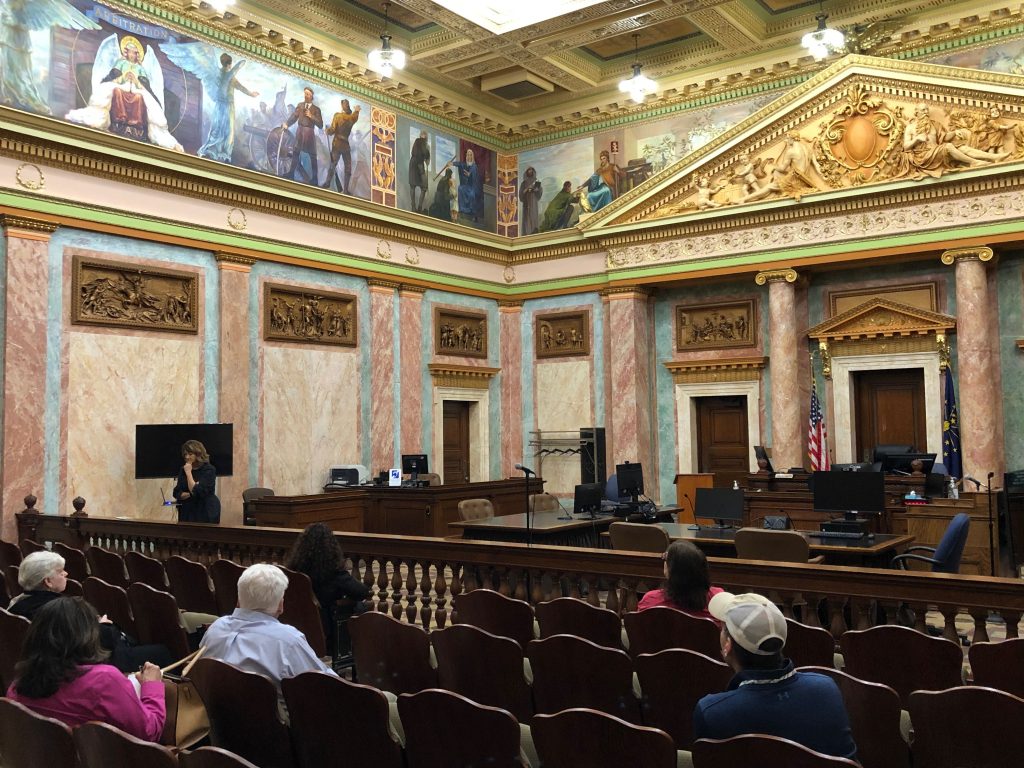 Group tours ($20) through the rotunda, hallways, and all four courtrooms showcase the architectural and artistic splendor, from the Italian Carrara marble stairways, original tile floors, and ornamental stained glass to the statues, intricate plasterwork, and gold and silver gild work. Portraits of important people adorn the walls, and murals and bas-relief panels depict key events in local history. Pause to gaze up at the stained-glass dome that rises 11 stories over the rotunda. Equally stunning are the colorful faux-marble columns and walls decorated in a veneer called scagliola, a process in which a mixture of crushed gypsum and marble dust is applied to plaster, then sanded and polished to a high gloss. The building sports 28 colors of scagliola in 24 swirling patterns.

Lincoln Tower, a 22-story Art Deco skyscraper right across from the courthouse, was Indiana’s tallest building upon its completion in 1930. The main entrance features seven bronze panels depicting the life and achievements of Abraham Lincoln.

Once home to Lincoln National Bank, Lincoln Tower fronts East Berry Street, which has signs marking it as the old Lincoln Highway, America’s first coast-to-coast highway. Take a peek at the main banking lobby (now Old National Bank) with its 24 teller windows, two lavish murals, and ceiling decorated with signs of the zodiac. The office building’s snack shop has the original 1930s soda fountain and is known for its egg salad sandwich.

Dining Establishments With a Side of History

Just down the street is another vintage eatery, Cindy’s Diner, a prefabricated metal building dating from 1954. Made to be portable, such diner structures could be lifted off their foundation and easily moved to a new location. This one, with room for about 15 customers, has undergone four moves and five name changes.

A few blocks away, nostalgia-seekers can connect with the past at another old school diner, Coney Island. This Main Street mainstay is Fort Wayne’s oldest restaurant and claims to be the oldest hot dog stand in America. Founded by Greek immigrants in 1914, the local favorite has been under the ownership of the same Macedonian family since 1916. Grab a stool at the counter or at a table for an iconic coney dog (with mustard, chili sauce, and hand-chopped onions) in a steamed bun, and wash it down with a small glass bottle of Coca-Cola. The place sells close to 2,000 hot dogs daily. The simple, no-nonsense menu also features hamburgers, bowls of chili and oven-baked beans, and assorted pies. 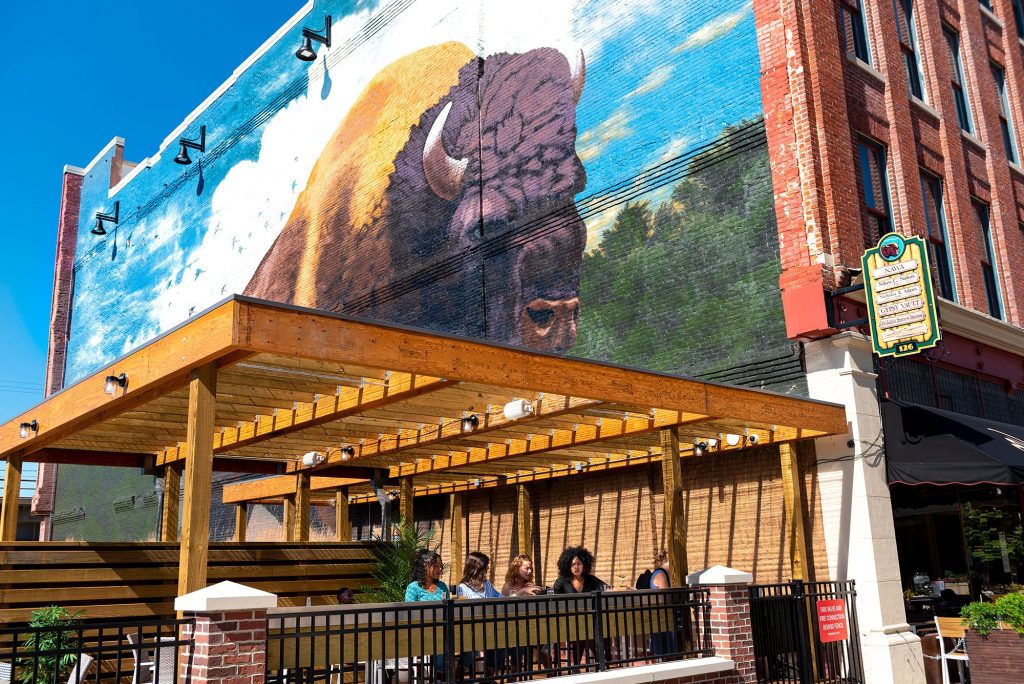 The Landing, a renovated warehouse district, has some of Fort Wayne’s most talked about restaurants. Shown here below the buffalo mural is the patio at Nawa, which serves up the flavors of Asia. (Photo credit: Visit Fort Wayne)

From Coney Island, walk a block toward the riverfront for contemporary dining experiences at The Landing, a newly redeveloped warehouse district with the hottest bars and restaurants. Options include Marquee, Mercado, Nawa, Landing Beer Co., Alto Grado Pizza, and Utopian Cafe. All are located on a block of Columbia Street, which for nearly a century was the principal commercial thoroughfare in Fort Wayne. Columbia was the terminal for passengers and freight arriving via the Wabash & Erie Canal, which thrived from 1843 to 1880.

Just west of downtown, historic buildings of the former General Electric campus are being transformed into a mixed-use development called Electric Works. The GE plant employed roughly 40 percent of the city’s workforce during its heyday in the post-World War II era, producing motors and transformers for electrical appliances, freight elevators, and fighter planes.

Opening this fall, the first phase of the $300 million project will include Union Street Market, the region’s first food hall and public market. Chapman’s Brewing Company, which has several Indiana locations, is moving its flagship brewery and taproom to Electric Works.  The Fort Wayne Farmers Market is also relocating there.

A speakeasy-style restaurant and bar will occupy the former GE Club, once a recreation center for GE employees. The new incarnation will keep four of the 12 bowling lanes and offer foosball and billiards as well. 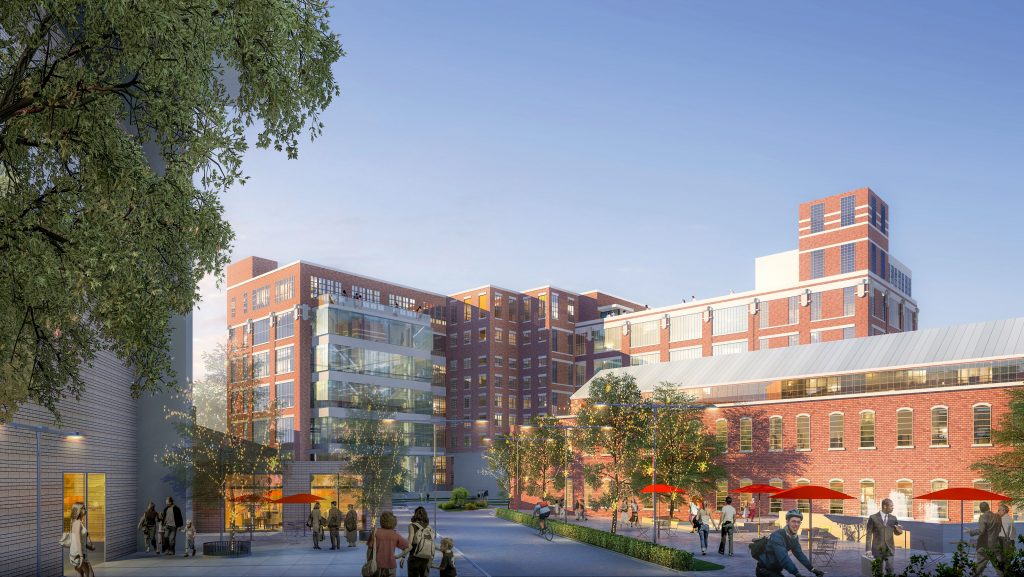 Electric Works, a redevelopment of the former GE factory, will have various dining and entertainment options. (Photo credit: Electric Works)

The 39-acre campus encompasses 18 brick buildings, the oldest dating back to 1893. Phase II of Electric Works will see the development of the section across the street.

The complex, located in the West Central neighborhood, will retain a retro feel and have visible nods to the plant’s history. Many elements from the manufacturing spaces are being kept and incorporated into the new, renovated areas.

The City of Fort Wayne publishes an illustrated walking tour map of the West Central Historic District, which has stately homes in a variety of architectural styles popular between 1840 and 1960, including Greek Revival, Queen Anne, Richardsonian Romanesque, Craftsman, and Prairie.

For more information on historical attractions in Fort Wayne is available from Visit Fort Wayne.