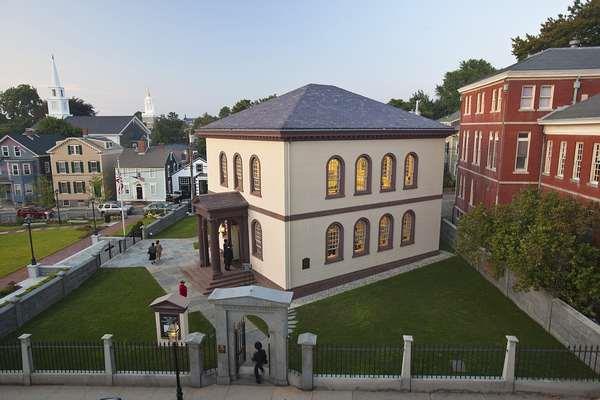 Many decades have passed since Newport’s heyday as the playground for high society, but sumptuous trappings of the Gilded Age still dazzle visitors to this historic resort town at the mouth of Narragansett Bay. Visions of fancy balls and grand lawn parties flood your mind as you tour the opulent mansions that America’s first millionaires kept as “cottages” for summer getaways from New York City. The Great Gatsby would have felt right at home in these palaces by the sea.

Newport is virtually synonymous with the Gilded Age, a period in the late 19th and early 20th centuries when financiers and industrialists like the Astors, Whitneys, Rockefellers and Vanderbilts accumulated unfathomable wealth before the advent of the federal income tax. While mansions-turned-museums on Bellevue Avenue are the chief visitor draws, Newport also boasts a rich colonial history, a boat-load of New England maritime lore, and plenty of celebrity and big-money connections.

On the waterfront, tourists prowl Bowen’s Wharf, a shopping village of shingled and clapboard boutiques and galleries that reflects Newport’s seafaring heritage. You can buy everything from marine art and scrimshaw engravings to resort wear and gourmet chocolate. Enjoy some seafood at the Wharf Pub (a microbrewery) or visit Aquidneck Lobster Co. to savor a lobster roll or pose with a giant lobster held by one of the friendly fishmongers. 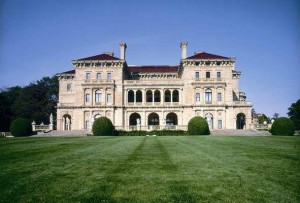 The Breakers, the Gilded Age estate of Cornelius Vanderbilt II, is the most visited Newport mansion. (Photo courtesy of the Preservation Society of Newport County)

Walk a block inland to the main historic district (Old Quarter) and discover a collection of specialty shops clustered around Brick Marketplace mall and cobbled Thames Street. Many visitors have lunch at White Horse Tavern to say that they’ve dined at the oldest continuously operating tavern in America and oldest building in Rhode Island (built as a house in 1652 and converted into a tavern in 1673.) Belly up to the bar for a Newport amber ale or have a bowl of creamy clam chowder at a candle-lit table in one of the cozy dining rooms. The beam ceilings and plank floors are original, and the fireplaces once warmed Rhode Island legislators who met in the tavern before the nearby Colony House on Washington Square was finished in 1741. The Colony House served as the seat of government for both the colony and state of Rhode Island when Newport was the capital. 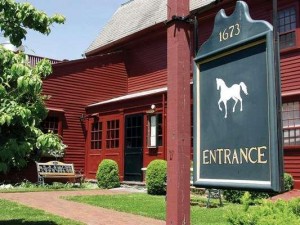 Also on Washington Square is the free-admission Museum of Newport History, which offers a video on the Gilded Age and exhibits on whaling, yachting, the rum and slave trades, and early resort life. Old Quarter walking tours offered by the Newport Historical Society leave from the museum and focus on what is considered the nation’s largest collection of pre-Revolutionary buildings (mostly private residences).

A stroll through the narrow streets also reveals stately houses of worship, including 1726 Trinity Church, distinguished by its graceful spire, and Touro Synagogue, the oldest synagogue in America. Celebrating its 250th anniversary this year, Touro Synagogue has an Orthodox congregation of about 100. One-hour tours combine a seated presentation in the synagogue, a Palladian Georgian masterpiece, with time in the Loeb Visitor Center for interactive exhibits on Jewish life in early America.

At the Gothic-influenced St. Mary’s Catholic Church, Sen. John F. Kennedy and Jacqueline Bouvier were married in 1953. The glamorous First Lady grew up at her family’s Hammersmith Farm, an exclusive Ocean Drive estate where their wedding reception was held. JFK and Jackie vacationed there, using it as a “Summer White House.” The home, no longer in the family, is pointed out on tours.

A Republican president, Dwight D. Eisenhower, spent several summers at neighboring Fort Adams (now a state park) in a house that became known as the Eisenhower House. (An ardent golfer, Ike was a regular at the nearby Newport Country Club.) Visitors to the sprawling coastal fortification, home to generations of soldiers until 1950, explore the listening tunnels and enjoy sweeping harbor views from the granite-walled ramparts. A zip line attraction is coming to Fort Adams this summer.

At the Naval War College Museum on Coasters Harbor Island, visitors learn about naval history in Narragansett Bay and naval heroes like John Paul Jones, Adm. Chester Nimitz and Rhode Island’s own Oliver Hazard Perry, who prevailed against the British in the 1813 Battle of Lake Erie. On display are torpedoes, swords, ship models and Navy recruiting posters.

The International Tennis Hall of Fame & Museum spotlights the greats of the game. Even those who are not tennis fans will enjoy the videos of memorable matches, touchscreen displays, and exhibits showcasing athletes who became household names. See vintage photographs, tennis-themed artwork and curios, and outfits and shoes worn by such superstars as John McEnroe and Bjorn Borg, Billie Jean King, and Serena Williams. The public can play on the manicured grass courts where the U.S. National Lawn Tennis Championships were first held in 1881 and continued until 1915. The museum just launched the year-long exhibit Tennis and Hollywood, which showcases the popularity of the sport with Hollywood’s elite. 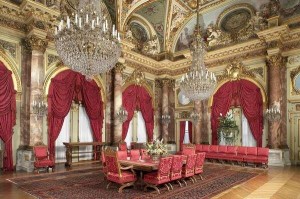 The sumptuous state dining room is one of The Breakers’ many eye-popping features. (Photo courtesy of the Preservation Society of Newport County)

The tennis shrine and 13 courts are housed at the Newport Casino, a Victorian-style venue where the upper crust gathered to socialize. (Despite its name, the Casino is not, or never was, a gambling parlor.) Located on Bellevue Avenue, just down the street from the mansions, it was the forerunner of the modern country club and today hosts the Campbell’s Hall of Fame Tennis Championships, the nation’s only professional tennis tournament played on grass.

The mansions tucked behind the walls, fences and hedges lining Bellevue Avenue are not just any historic homes. Fashioned after Old World palazzos and chateaux, these were the showplaces of America’s early captains of capitalism, members of an instant aristocracy based on recently acquired fortunes. Flaunting their wealth, the ultra-rich furnished their summer homes with exquisite artwork and objects from abroad.

The Breakers, built from 1892-1895 for Cornelius Vanderbilt II, is the grandest residence and the most visited. A staple on shore excursions, the five-story, Italian Renaissance-style palazzo—named after the waves that crash against the cliffs in back—contains all the original furnishings, from elegant wall sconces to ornately carved marble fireplaces. Most sumptuous is the state dining room, one of the great rooms of the Western world. Adorned with a gold leaf-encrusted ceiling, enormous baccarat crystal chandeliers and colossal rose alabaster columns with gilded bronze capitals, the vaulted, marble-clad room is truly fit for a king. Besides the regal salons, audio tours of the 70-room mansion highlight bedrooms, bathrooms and closets, shedding light on the lives not only of the Vanderbilts but their staff of 40 servants.

Rivaling the Breakers in mind-numbing extravagance is the lordly Marble House, a symphony in gilt and marble orchestrated by French and Italian artisans for William K. and Alva Vanderbilt. Other over-the-top Bellevue Avenue mansions visited on Newport shore excursions include The Elms, built in 1901 for coal magnate Edward Berwind, and Rosecliff, where scenes in The Great Gatsby, the 1974 movie featuring Robert Redford and Mia Farrow, were filmed.