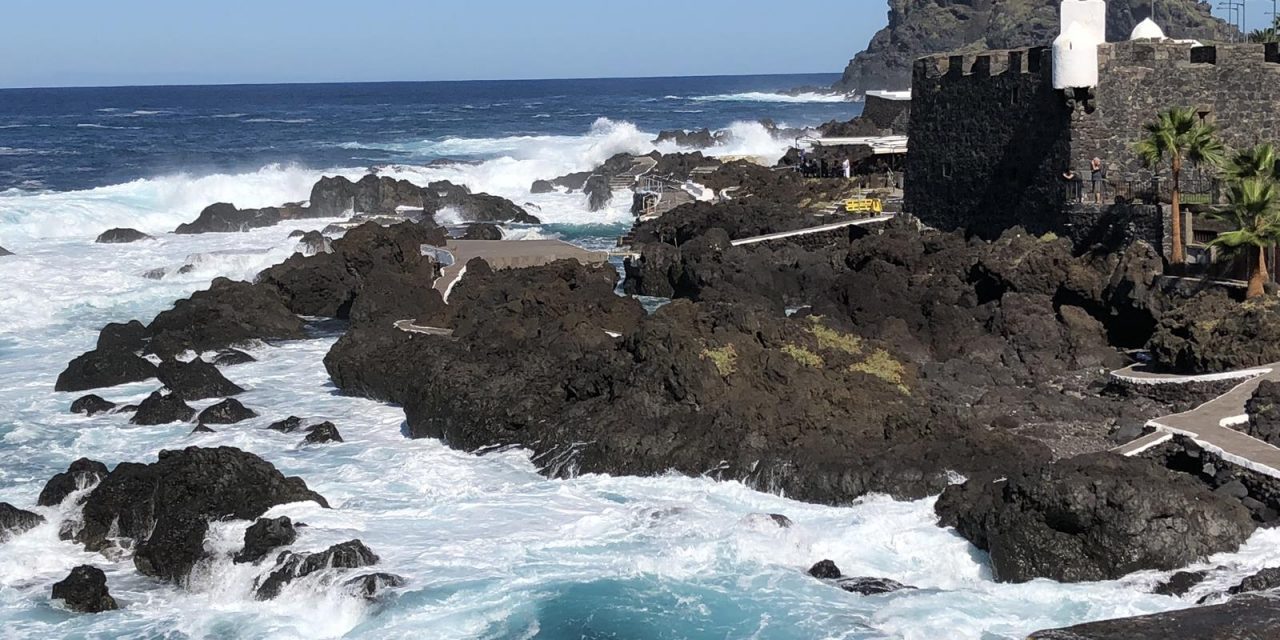 Where in the world are the Canary Islands?

Ask someone their location on the map, and you’ll get all kinds of answers.

The Caribbean? South Pacific? In the Atlantic Ocean off the coast of Africa?

The last answer, as the travel-savvy know, is the correct one.

The subtropical group of volcanic isles lies 62 miles west of Morocco at the closest point. Though Spanish territory, the Canaries cluster sits more than 600 miles from mainland Spain. So, they’re a part of Spain, but apart from it—separated physically and with a distinctive culture. Each of the seven main islands, moreover, has its own personality and topographical characteristics.

Tenerife, the largest, and others in the chain appear on Western Mediterranean, transatlantic and around-the-world cruise itineraries. Cunard Line offer cruises from England to the Canaries, a fun-and-sun beach spot long popular with British vacationers.

Touting spring-like weather all year, promotional literature claims the Canary Islands enjoy “the best climate in the world” thanks to a “generous supply of sunshine pleasantly tempered by the trade winds.” Temperatures rarely exceed the low 80s.

For those intrigued by geographical curiosities, the Atlantic archipelago is a bucket-list destination.

Tenerife, a three-hour flight from Madrid via Iberia Airlines, extends 60 miles in length and ranges from 10 to 30 miles wide. But this relatively small package has a surprising amount of natural diversity and a number of microclimates. In just a few miles the scenery and weather can change dramatically. The arid, sunny south is divided from the lush verdant north by a mountainous landscape that divides the island into two different worlds. You will find beach resorts (mostly in the south) and golf courses, pine forests and barren deserts, urban congestion and quiet villages.

Because much of Tenerife is extremely hilly, agricultural land is scarce, so terraces have been built for vineyards, banana plantations and potato fields. In the island’s middle stands Mount Teide, the highest mountain in Spain and centerpiece of a national park. Half the island consists of protected nature areas.

Cruise travelers get their first taste of Tenerife upon arrival at Santa Cruz de Tenerife, the biggest city (pop. 250,000) in the Canaries. Though the port area has a commercial feel—with container ships, gantry cranes, oil tankers and interisland ferries—the city’s pleasant waterfront promenade is just a minute by shuttle from the pier. 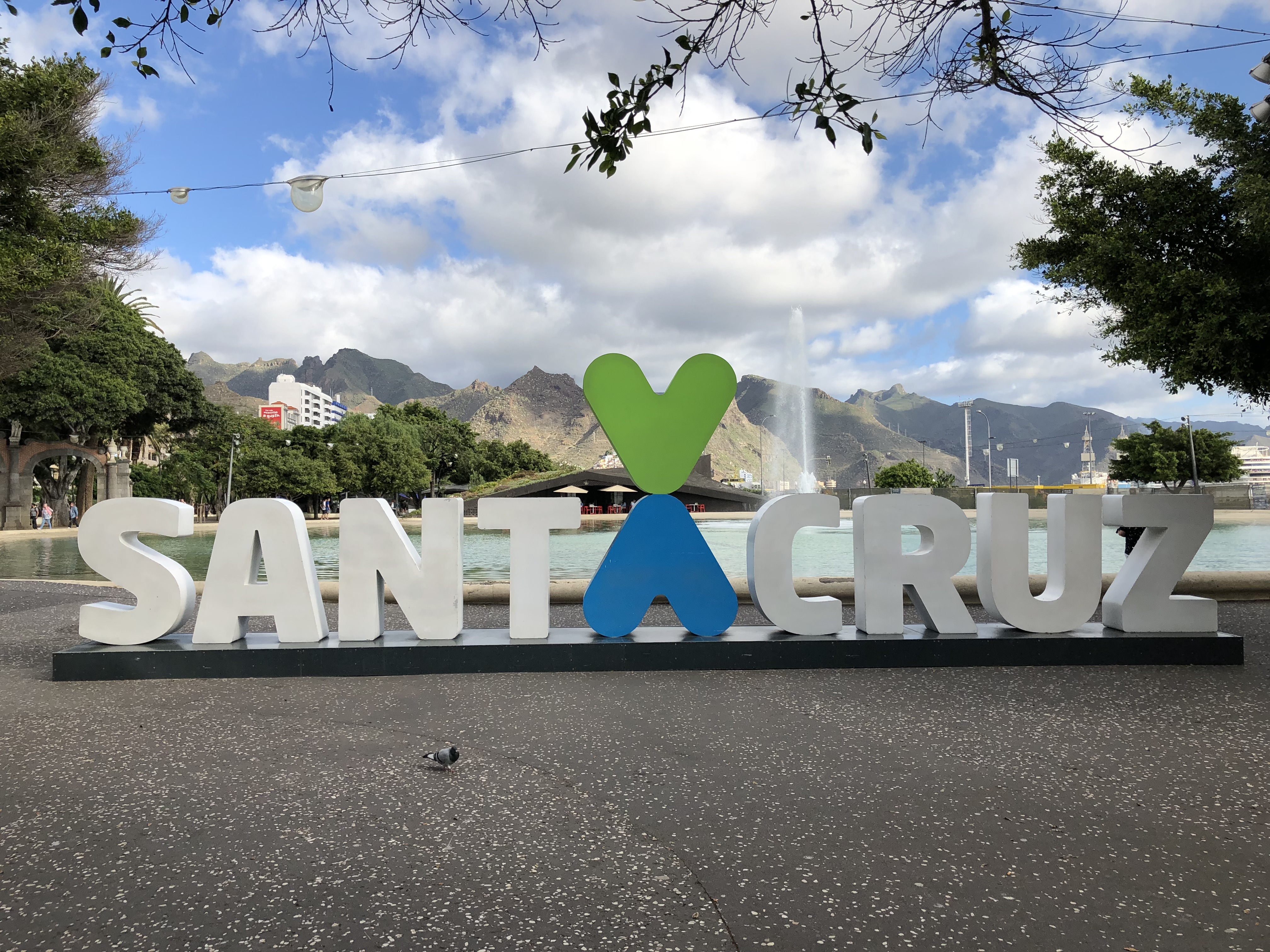 Once in town, you’ll encounter taxis and double-decker buses ready to embark on sightseeing whirls. But the Santa Cruz waterfront, with the ambience of a seaside resort, is so inviting that you could spend hours there, exploring its environs on foot. Cruise visitors find tourist information offices, cafes, kiosks, fountains, benches, and plenty of shade provided by ficus, flame and palm trees. Adjacent blocks abound with parks, gardens and shop-lined pedestrian ways.

At Plaza de Espana, the hub of harborside activity, oversized letters spelling out “Santa Cruz” present a great photo op. A historical marker explains how Lord Nelson and the British Navy tried to conquer the island in a 1797 battle that saw Nelson being shot by a cannon at that very spot. Spain was victorious, and Nelson had to have his right arm amputated upon returning to the ship. The plaque’s inscription ends, “Praise and glory to the heroes!” In the middle of the square are a pool and giant monument to victims of the 1936-39 Spanish Civil War.

A 15-minute walk from the plaza takes you to the city’s historic district and Church of the Conception. Built in 1500 and reconstructed several times since, it sports a prominent bell tower, wooden balcony, and rustic interior with a magnificent altar, beamed ceiling and round arches of reddish volcanic stone. 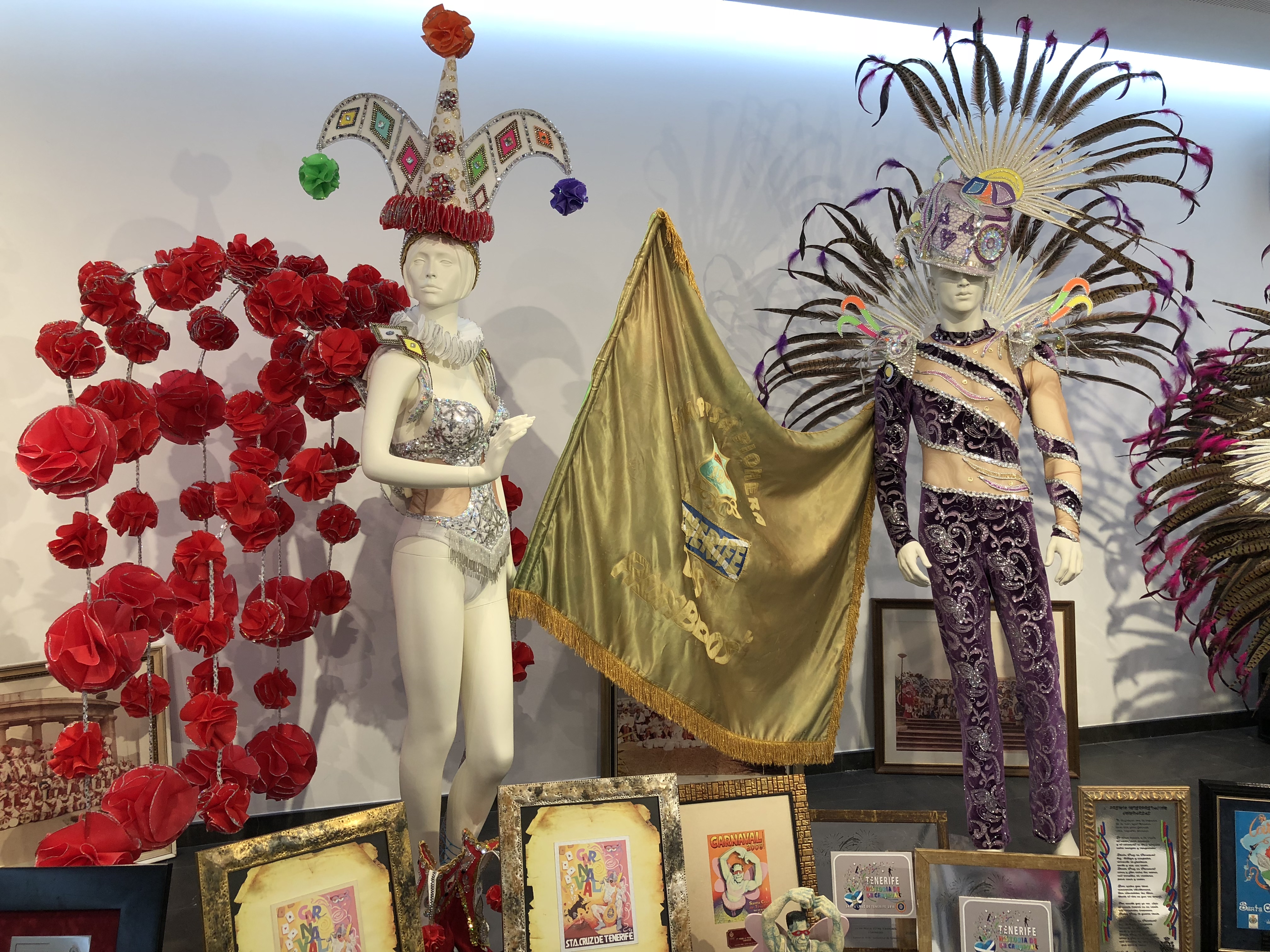 Nearby, the new Carnival Museum showcases Santa Cruz’s famous Carnival celebration, one of the biggest and most exotic in Europe. The week leading up to Lent is highlighted by a parade—said to rival that of Rio de Janeiro—lasting six or seven hours. Museum exhibits include videos of the procession and street parties, along with displays of costumes adorned with feathers, beads, spangles and sequins. 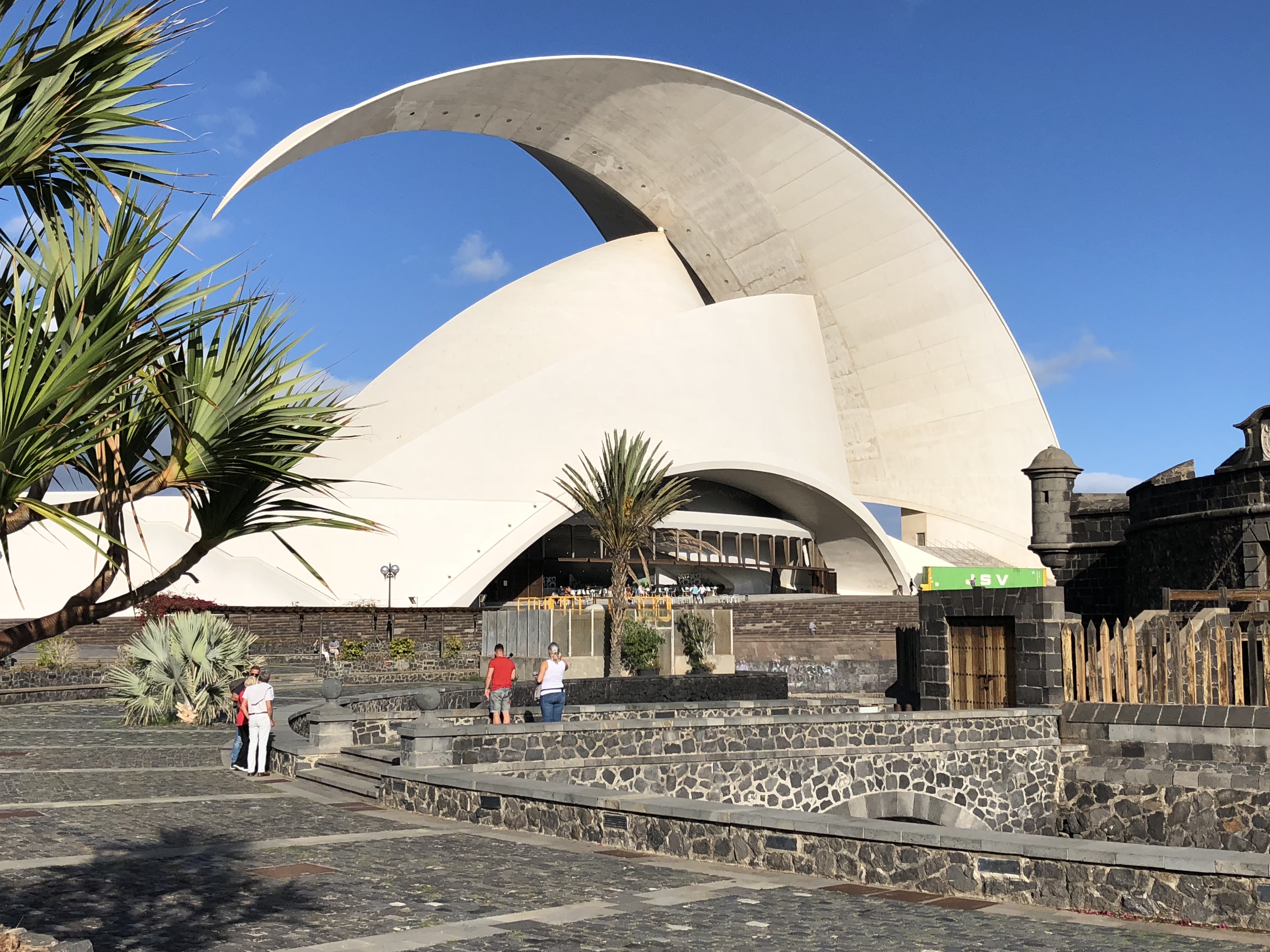 Bus tours of Santa Cruz typically include a stop at the Auditorio de Tenerife, an architecturally stunning performing arts center perched on the oceanfront. Designed by famed architect Salvador Calatrava and opened in 2003, this opera/classical music venue in shimmering white ceramic is known for its graceful contours, most notably the wave-like protrusion that arches over the hall. Like the Sydney Opera House, the auditorium has become a symbol of the city.

For an enchanting glimpse into the Old World, be sure to visit the beautifully preserved historic quarter of La Laguna, a lively university city next to Santa Cruz. Commune with the past in a traffic-free zone of stone walkways and atmospheric squares, stopping to admire the churches, convents, and carved pine balconies and doors of mansions occupied by nobility between the 16th and 18th centuries. Through carved-rock portals, peek into leafy courtyards with flowers and fountains. 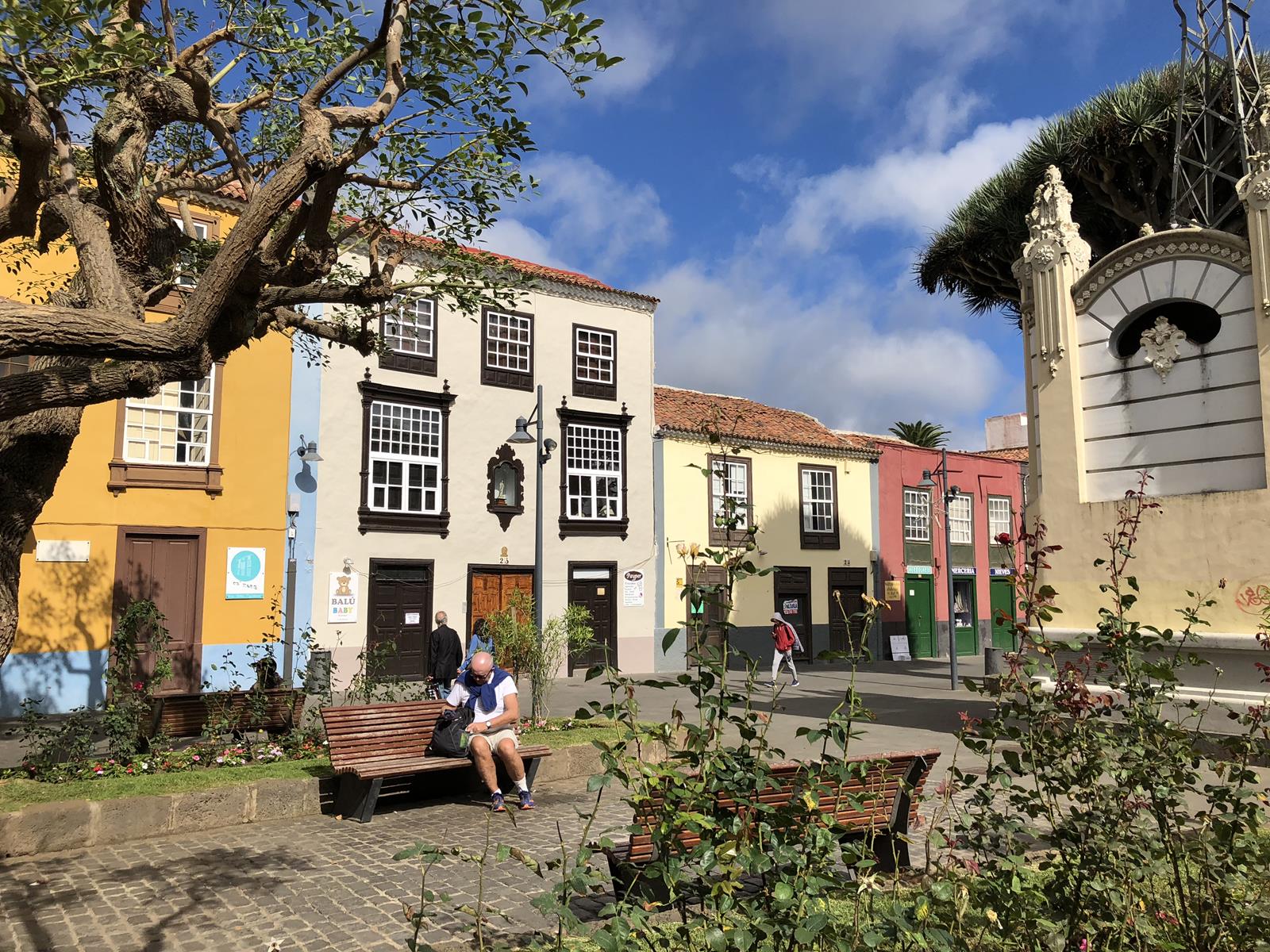 Many of the old homes, painted in colors like peach, salmon, ochre and blue, now house businesses or other organizations; a few are museums. Art galleries and designer boutiques are also worth a look at this UNESCO World Heritage Site. La Laguna was Tenerife’s first capital.

A favorite Tenerife excursion is the drive to Teide National Park for views of the island’s signature natural landmark. Along the route, which passes through a canopy of pines, are photo stops for capturing the majesty of 12,198-foot Mount Teide. Rising from a volcanic crater that has been dormant since 1909, the peak is snow-covered from October to May—quite a phenomenon considering the subtropical clime. The surrounding lava beds, a desert-like plain, resemble a Western movie set. 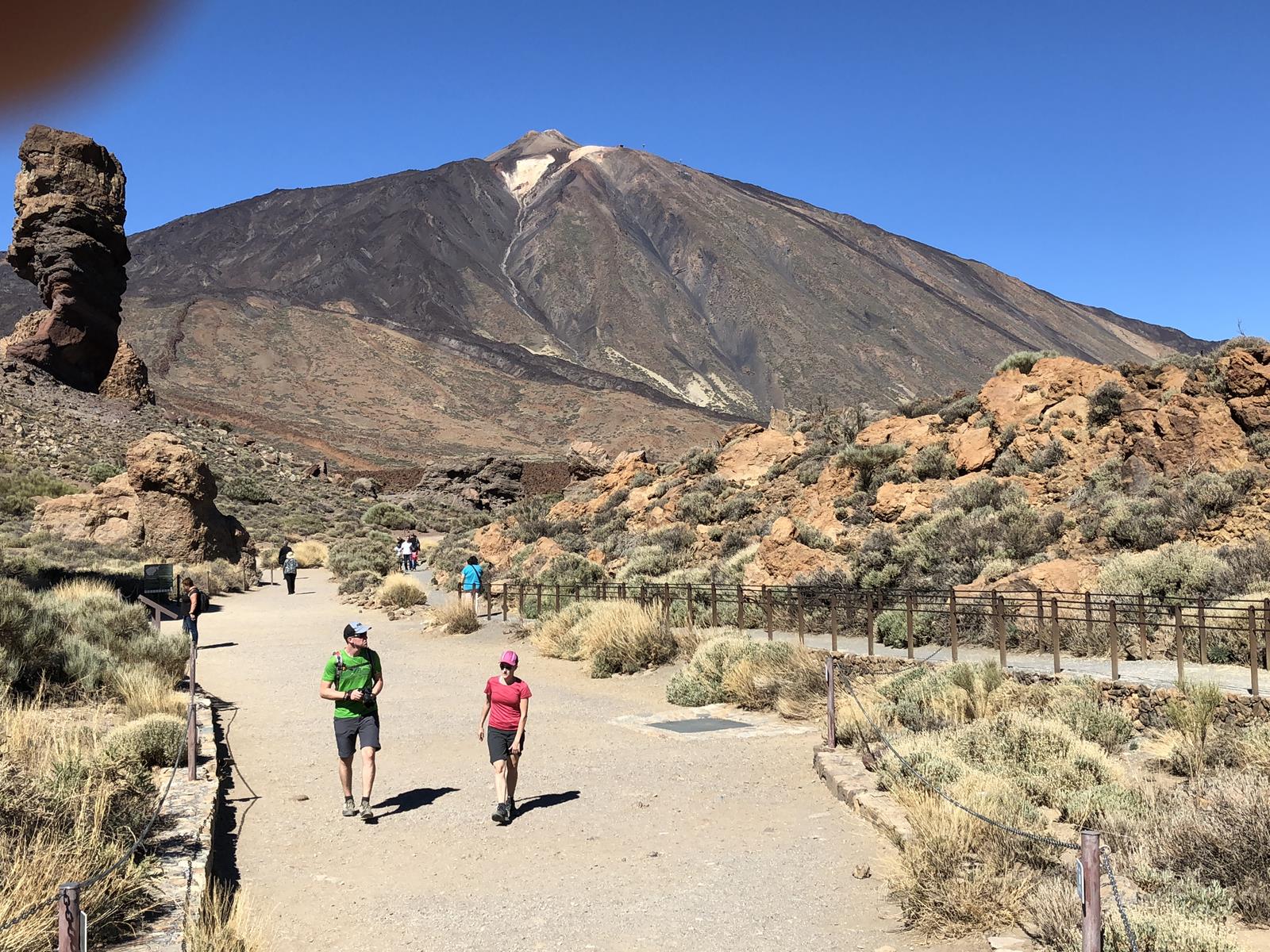 Some Teide excursions include a cable car ride to the chilly mountaintop. This above-the-clouds experience deposits you at the 11,646-foot level, where viewpoints afford panoramas of the lava-carved landscapes and the sure-footed can venture off on a path through craggy rocks. Look up behind you and watch hardy hikers climbing the final 600 feet, a near-vertical ascent to the summit.

As many amateur astronomers are aware, the Canary archipelago, with its clear skies and low level of light pollution, is recognized as one of the world’s best places to view the night skies (along with Chile and Hawaii). Stargazing excursions involve traveling to Teide’s cable car base station, where guides point out planets and stars visible to the naked eye or through long-range telescopes.

Scenic tours from Santa Cruz not only go to the island’s center but to its eastern and western extremities, which also boast rugged vistas. Northeast of the city, winding roads with hairpin turns snake through the Anaga Mountains, a land of lush ravines, craggy peaks, sheer walls of basalt rock and houses stacked on hillsides. Vegetation varies from palms and ferns to cactus and agave.

After a short boardwalk trek in the primeval laurel woodlands of Anaga Rural Park, your bus tour continues to sea level, where the road ends at the village of Taganana. Here at the “end of the world,” tour groups stop for tapas or lunch at Bar Playa Africa, a family-run place located across the road from crashing waves and a black-sand beach. Furnished with blue-checked tablecloths and populated by resident cats, the cheery spot serves seafood accompanied by delightfully salty papas arrugadas, or wrinkled potatoes. The small, unpeeled potatoes are boiled in salty water—sometimes seawater—and tossed with additional salt once cooked and drained. Served with most dishes throughout the islands, they are typically eaten with red or green mojo sauce on the side. The ubiquitous mojo—made with vinegar, olive oil, garlic, toasted almonds and salt—is also used as a condiment with bread and other foods.

As if those little salty potatoes are not addictive enough, spread your bread with almogrote, a Canarian indulgence made with cured goat cheese, hot red peppers, olive oil, garlic and sometimes tomatoes. A jar of the rich paste makes a great souvenir.

Traveling around Tenerife, you’ll be captivated by the odd-looking dragon tree, a bush-like mass of entwined branches with spiky leaves at the top. In the northwestern coastal town of Icod de los Vinos, tour groups stop at the Thousand-Year-Old Dragon Tree. Believed to be one of the oldest such trees in existence, it was declared a national monument in 1917. In a stately building at the site of the dragon tree and adjacent botanical garden, the shop La Casa del Drago has a courtyard cafe where guests can try the red liqueur made from dragon tree fruit. 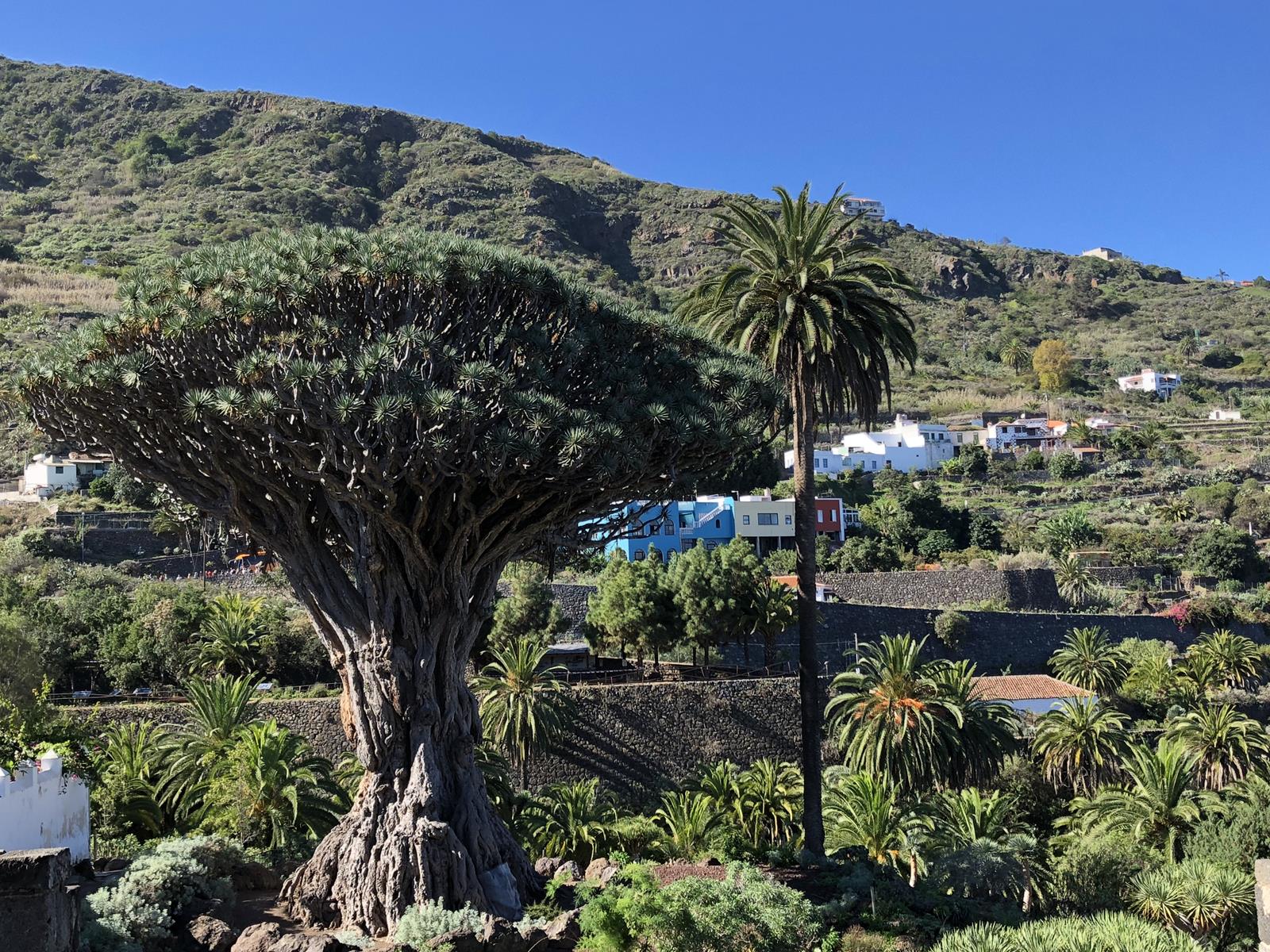 Canarian wines, praised by Shakespeare in several plays, are highly regarded and sold around the world. Tenerife has more than 100 wineries. In the historic town of El Sauzal, Bodega Monje is a fifth-generation winery that produces 14 types of wine, with about 20 percent of the total being exported to the U.S. One of three Tenerife wineries offering tours, it operates a restaurant with a patio overlooking the Atlantic and terraces planted with vines that are 100 to 300 years old.

A feast for the palate as well as the eyes, Tenerife offers abundant pleasures for the inquisitive traveler. This largest Canary isle, with all its diversity, is certainly something to sing—or tweet—about.