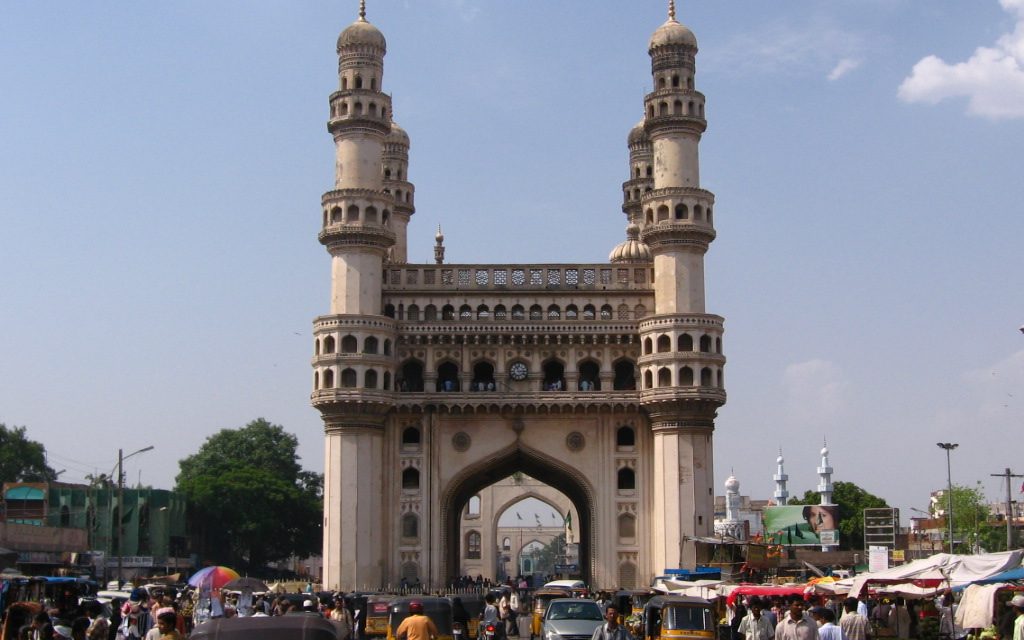 If you’re surrounded by the appetizing aroma of delightful mutton biryani combined with a tinge of tea flavor hanging in the air while overlooking some brilliant Indo-Islamic style architectural monuments, yes you’re in the ‘City of Pearls’, Hyderabad. Located in Andhra Pradesh, Hyderabad is situated at the junction of northern and southern India, famously known as the ‘Gateway to the south’ and it is the capital city of two states: Andhra Pradesh and Telangana. Not only that, but the city also represents a perfect blend of Hindu and Muslim traditions all of which is reflected in the super-awesome food, stupendous monuments and majestic historic tales. So you’re in a land that is amazingly rich and diverse in cultures!

No matter who you are, you’ll be stunned by the charming aura of Hyderabad. This city will take you on a ride of rich cultural diversity and tales of the past dating back to almost 400 years! But before that, let’s take you on a virtual tour of the city! 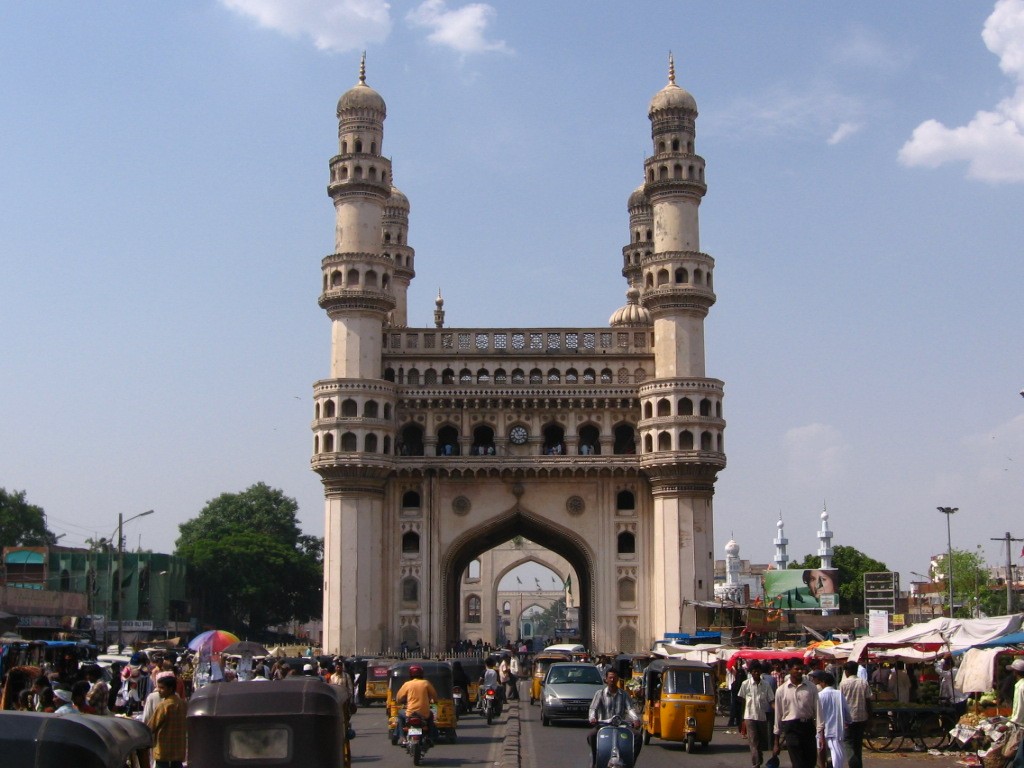 Photo by Soham Banerjee, CC BY 2.0

Charminar is almost synonymous with Hyderabad is and the signature monument of the city. During its establishment in 1591, Charminar was designed to be located literally in the heart of the city to form an intersection for all trade routes around the city. Beautifully crafted in Indo-Islamic style along with exquisite elements from Persian architectural styles, the Charminar-with its four charming minarets stands tall by the banks of Musi River surrounded by the famous Laad bazaar.  On the rooftop of this monument rests a beautiful mosque with as many as 45 prayer spaces for the devotees. Here is where you can still capture an essence of the old Hyderabad. 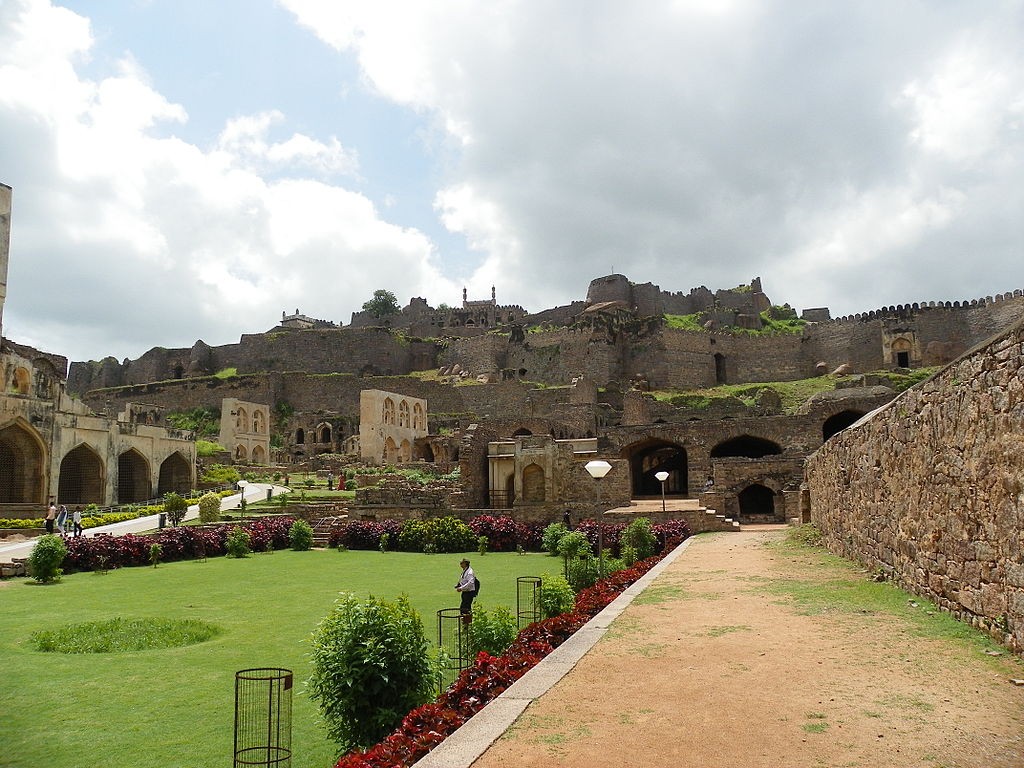 Golconda fort is located 11km west of Hyderabad. It originated as a simple mud fort around an idol discovered by a shepherd boy. This mud fort was established by the Kakatiya king around the 13th century. From then on it acquired great significance and was renovated and furnished by the upcoming dynasties, with Qutb Shahi Dynasty being the major contributor. Every single detail, be it the splendid architectural designs or the water supply system or even ventilation techniques (that include installation of the then styled air conditioning systems!) portray brilliant and meticulous craftsmanship and remains of these super-awesome things can still be witnessed! The Golconda fort speaks volume about its rich cultural heritage! A recent addition that glorifies the beauty of this fort is the light and sound show telling majestic tales of the past. Don’t miss! 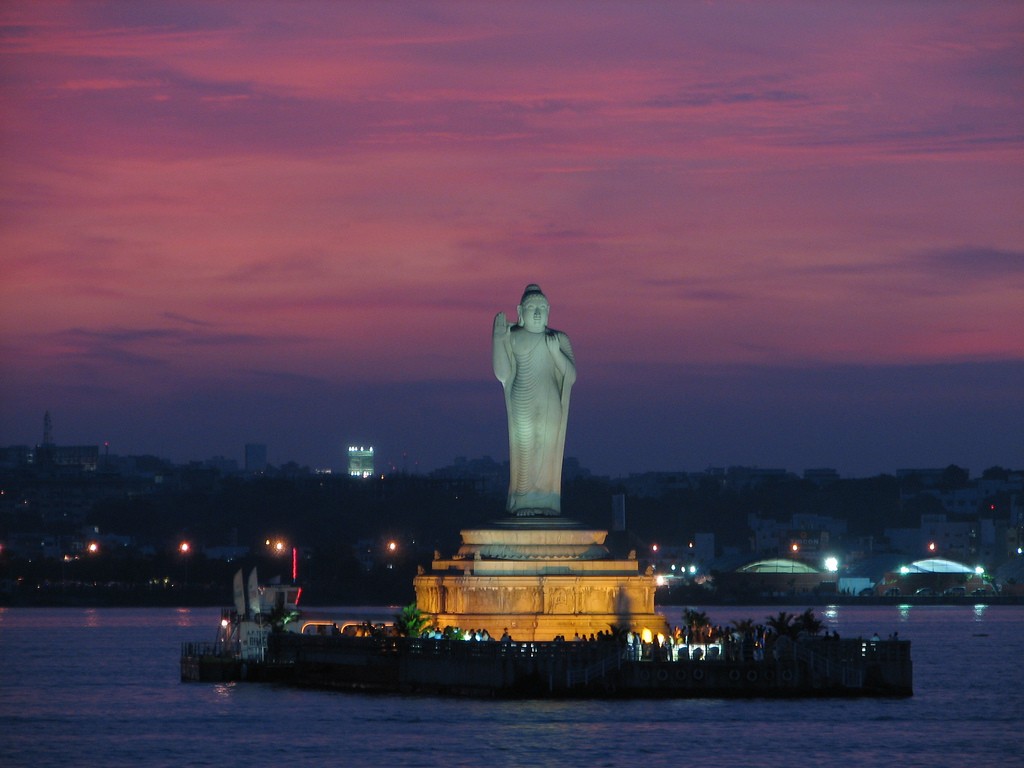 The Buddha statue at the Hussain Sagar – Photo by Alosh Bennett, CC BY 2.0

The shimmering waters of the lake filter the sun’s rays minutes before the sun is set to bid goodbye and chirpy li’l birds fly off from the grand enthralling statue of Buddha made of sparkling white granite standing amidst these waters on the Rock of Gibraltar. Such picturesque beauty of the lake will take your breath away. It is an artificial lake built in 1562 by Hussain Shah Wahi and connects Hyderabad and Secunderabad (often referred to as ‘twin cities’). A water front known as ‘Tank Bund’ was constructed and one side of the Tank Bund is adorned with more than 30 statues of some of the greatest leaders of Andhra Pradesh. The Hussain Sagar Lake is a beautiful picnic spot and a major tourist attraction in Hyderabad. Even some water sports activities are offered for adventure lovers! 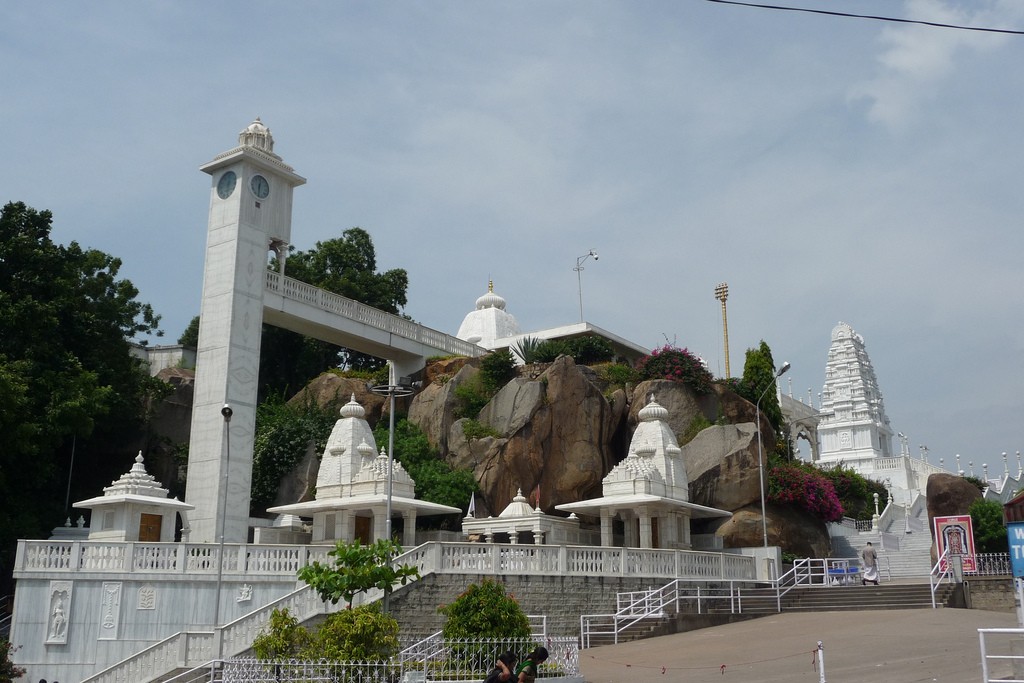 Yet another monument representing a perfect blend of varied cultures is Birla Temple! Incorporating brilliance of both northern and southern styles of architecture, this marvellous temple is built of beautiful white marble brought in especially from Rajasthan! It is located on a hilltop of Kalapahad and is dedicated to Lord Venkateswara. The craftsmen have beautifully decorated every nook and cranny of the monument with intricate carvings and exquisite mythological sculptures. Even scenes from Ramayana and Mahabharata are depicted within fine carvings of the marble. The temple welcomes visitors and devotees from 7 am to 12 pm and 3 pm to 9 pm on all seven days. 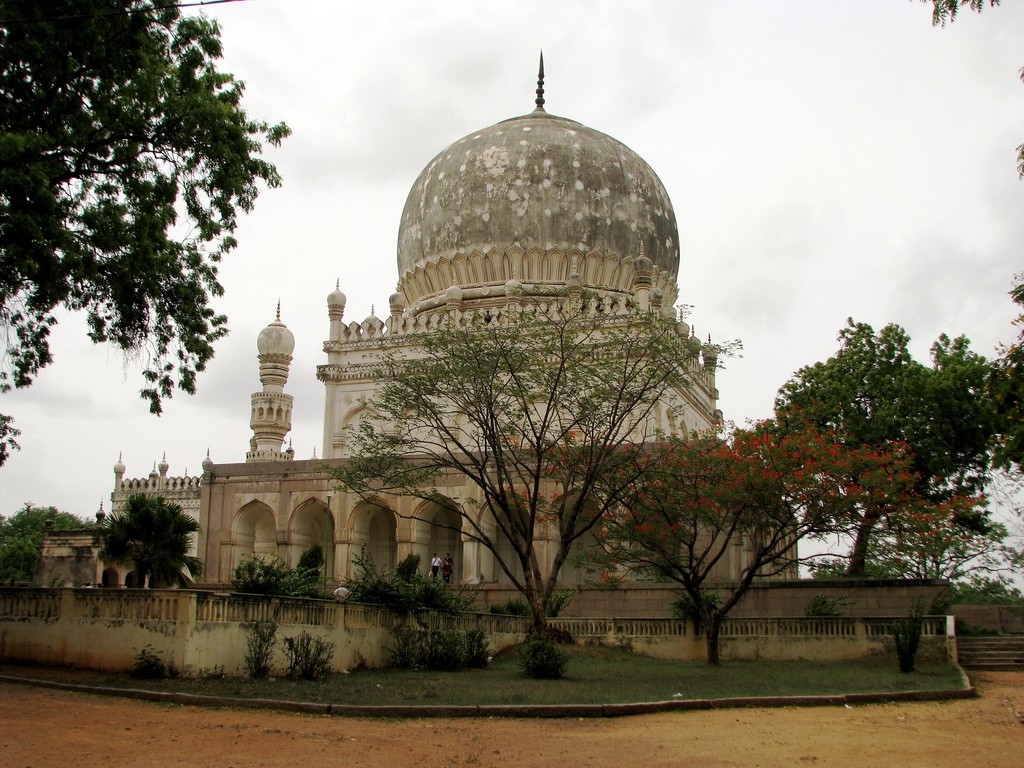 The Qutb Shahi Tombs were built in commemoration of the kings of Golconda. The unique feature of these tombs is that, these are built as monuments on raised platforms with the largest tomb rising to a height of almost 42.5 meters! In fact, the real tombs rest on the rooftops and you need to climb a flight of steps to reach the terrace. The monuments are pieces of extraordinary beauty! Crafted in unique Persian, Hindu and Pathan architectural styles, there are six such tombs. The tombs are open for visitors on all days except Friday from 9.30 am to 4.30 pm. 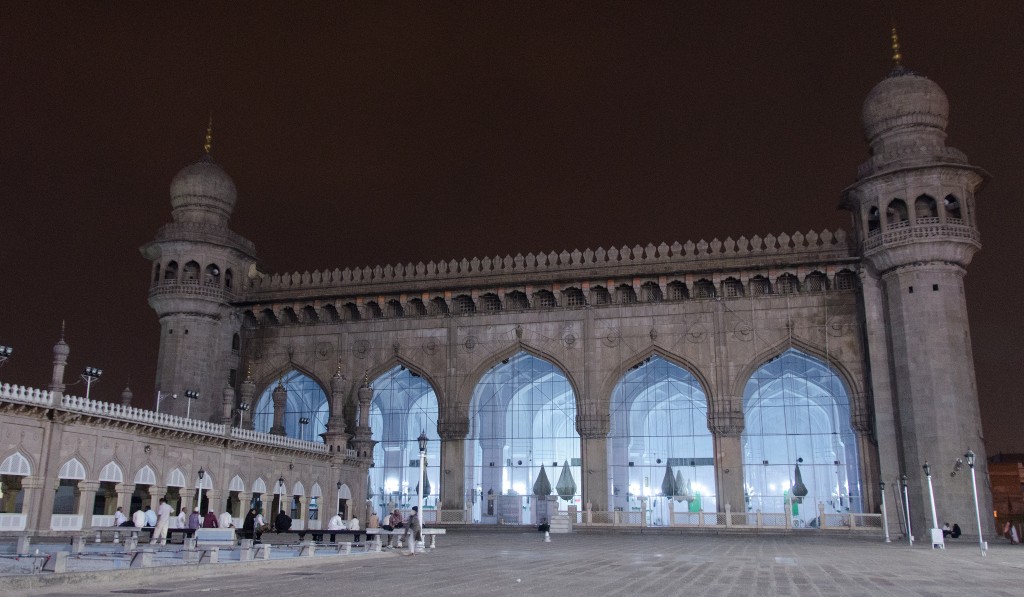 The construction of Mecca Masjid was initiated by the founder of Hyderabad-Mohammad Quli Qutub Shah in 1617 and believed to be completed by the Mughal King Aurangzeb in 1694. The mosque is amazingly huge! It is one of the largest mosques in the country and has an incredible capacity to accommodate as many as 10,000 whisperers during a prayer. It is also the oldest mosque in Hyderabad. The mosque is designed in a Qutub Shahi architectural style and interesting features of the mosque are the columns and arches that are carved out of a single slab of granite! Such brilliance is worth a visit!

Hyderabad is thus adorned with such monuments and sights reflecting the rich cultural diversity. Apart from that, there are many relaxing hill stations near Hyderabad which are worth a visit too!

An explorer by choice and a writer by profession, Rohit Agarwal combines these skills effectively to tell tales of the glorious past and beautiful present of many corners of the world. Taking help of the ‘mightier pen’ he shares his experiences of joy, amazement and wonder of witnessing such magnificence at his blog – http://www.transindiatravels.com!