Shoreline Sightseeing Blows it Out of the Water 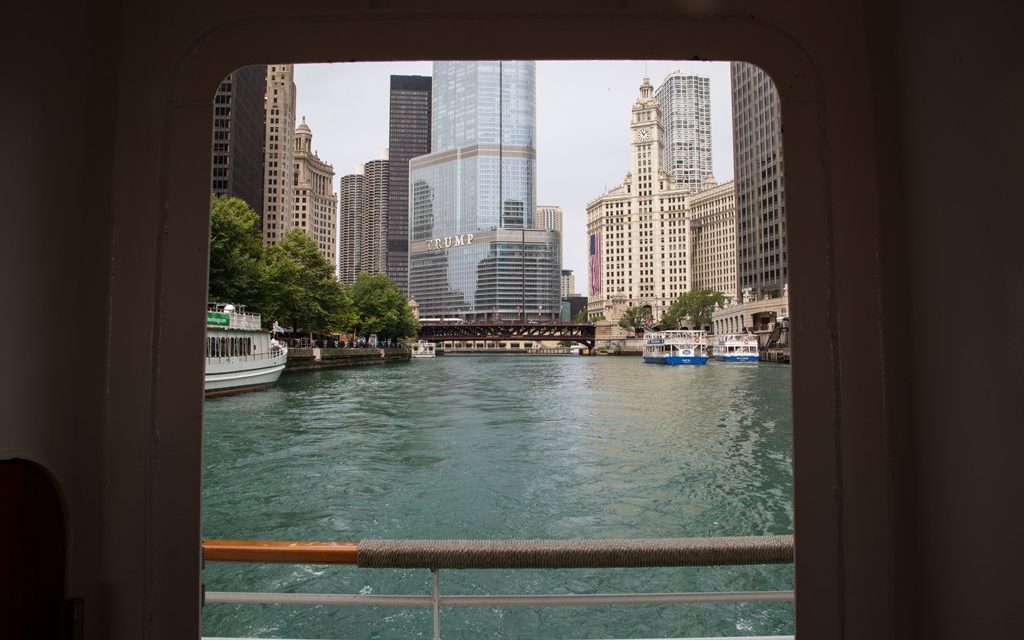 Looking for the ultimate Chicago experience? An Architecture River Tour with Shoreline Sightseeing provides it all, from water to land.

On a breezy Tuesday morning, I walked into Polk Bros Park in Navy Pier ready to embark on an Architecture River Tour with Shoreline Sightseeing, a prestigious boat tour company and the first to bring water taxis to Chicago. I knew my experience would be nothing less than the best. Stepping onto the Voyageur, a 200-person charter, our tour guide, Adam Habben, greeted guests with a beaming smile. This vessel was custom built for river tours, providing unrestricted views of the skyscrapers from every seat.

Chugging along through all three branches of the Chicago River, the tour featured the Tribune Tower, Wrigley Building, Trump Tower and Marina City Towers; we passed by more than 40 architectural gems in total. Compared to afternoon and evening tours, this morning tour had quieter vibe. After grabbing a beverage from its bar service, I sat back and relaxed, ready to stare in awe at Chicago’s historical landmarks. 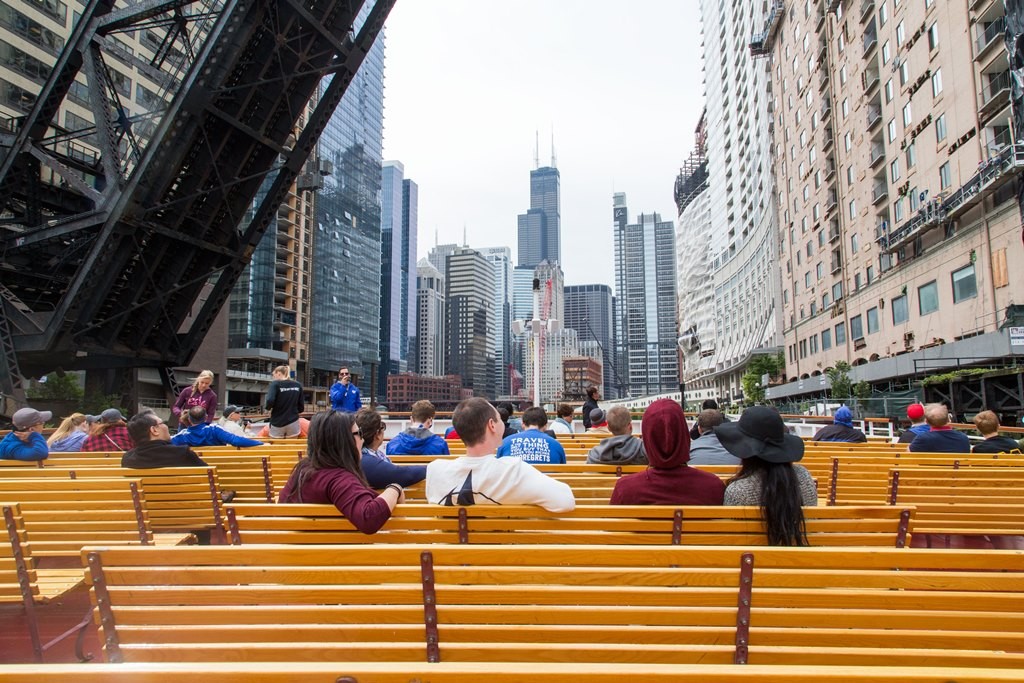 Starting our journey down the Chicago River. Credit: Nicole Katzman

I learned some important stuff on this tour. There are 38 bridges in the city; the green-tinted windows on buildings are made to reflect the river; and Chicago has some of the tallest buildings in the Western Hemisphere. I learned the history of the Great Chicago Fire and the river’s role in that; due to the abundant trash, sewage and industrial runoff, the river itself caught fire. I learned about architect Adrian Smith and his beautiful architecture in the city; he’s the designer of the two tallest buildings in the world and the Trump Tower. I also learned just one building, the Merchandise Mart, had its own zip code—I guess being the largest commercial building in the world and previously owned by the Kennedy family has its perks.

Floating down the river under the Magnificent Mile, I learned more about the Windy City than I ever thought imaginable. Am I a Chicago local yet? Here’s a taste of what you’ll learn from Shoreline Sightseeing’s Architecture River Tour.

Centennial Fountain is one of the first attractions we saw on the tour. Every hour, on the hour, the fountain shoots a huge arc of water across the river from a modern waterfall for a whole 10 minutes. Luckily, Shoreline Sightseeing’s crew times the boat’s passing perfectly to avoid getting soaked.

Tribune Tower, location of the Chicago Tribune and CNN’s Chicago bureau, was built in 1913 and was the first to be categorized as “American perpendicular style.” By 1922, Tribune Tower was looked at as a neo-Gothic design tactic. Artist Rene Paul Chambellan contributed sculptured gargoyles to the building. Famous movies such as Transformers: Dark of the Moon feature scenes shot here. 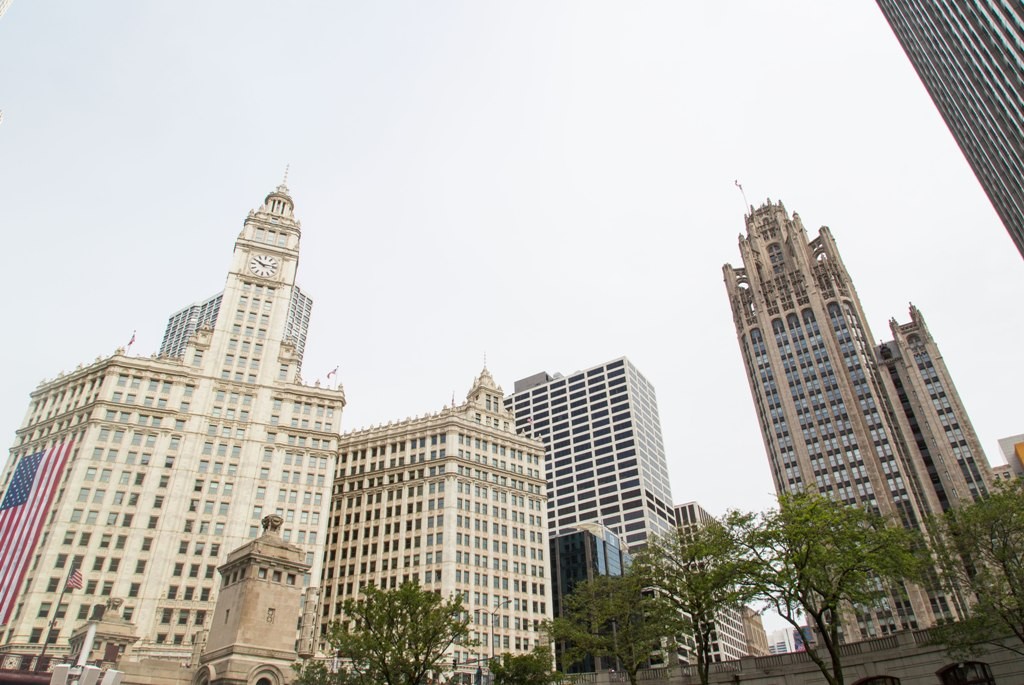 Wrigley Building is located directly across from the Tribune Tower and was built to be the headquarters of the famous gum company. The 435-foot tower was finished in 1924, with bridges connecting the north and south side of the building. 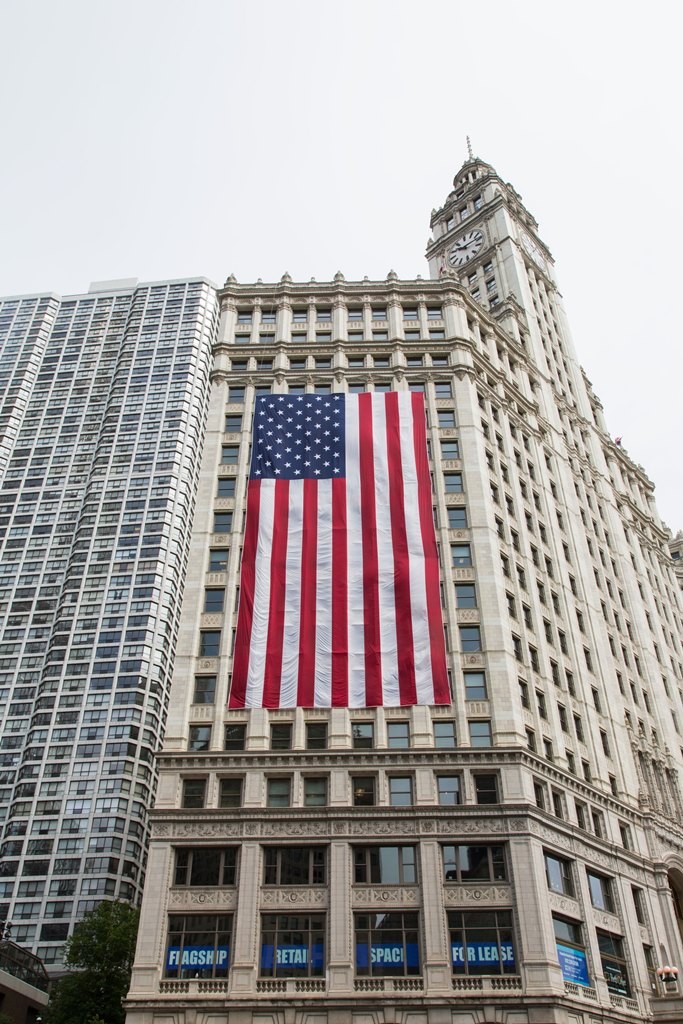 Trump International Hotel and Tower, the second tallest building in the city, is one of Adrian Smith’s prized designs. The 98-story structure has a great location on the main branch of the Chicago River and was the tallest residential building until 2014. The skyscraper has three architectural setbacks to provide visual continuity with the surrounding skyline; the first aligns with the Wrigley Building, the second with River Plaza and Marina City Towers and the last with IBM Plaza. With condos, hotel rooms, restaurants and spas, Trump Tower is what one would call well-rounded. 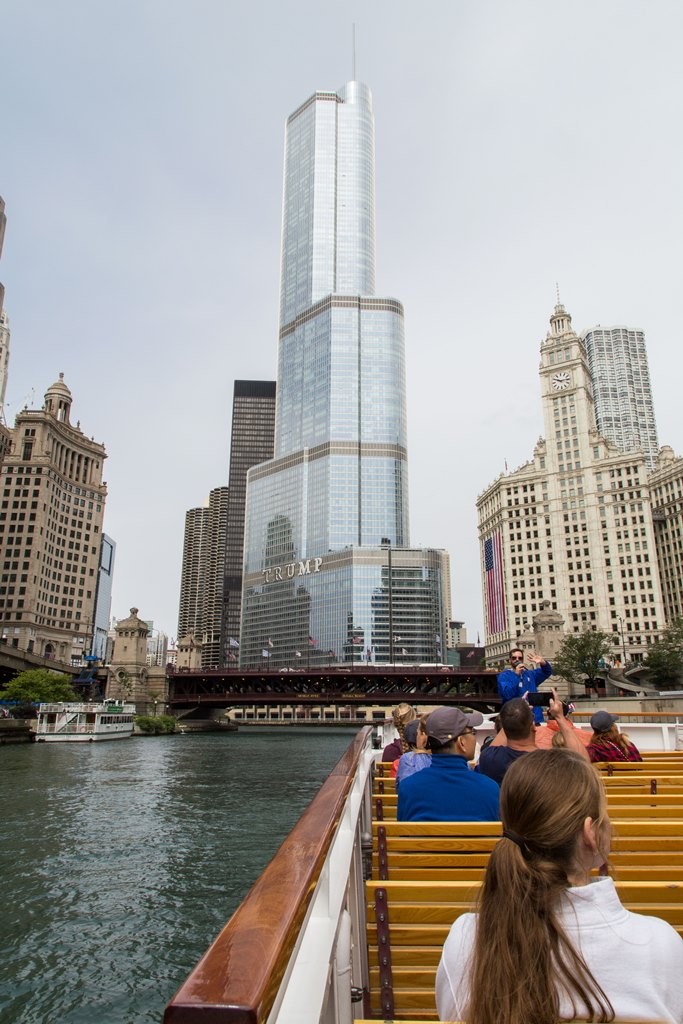 Marina City Towers are among the most recognized buildings in Chicago. Their circular shapes and exposed parking garages make them unforgettable pieces of architecture—to me they look like corn-on-the-cob. They occupy an entire city block on State Street, with 65 stories and a small marina underneath at river level. The towers are specially noted for their high-speed elevators; it takes approximately 35 seconds to reach the 61st floor from the lobby. 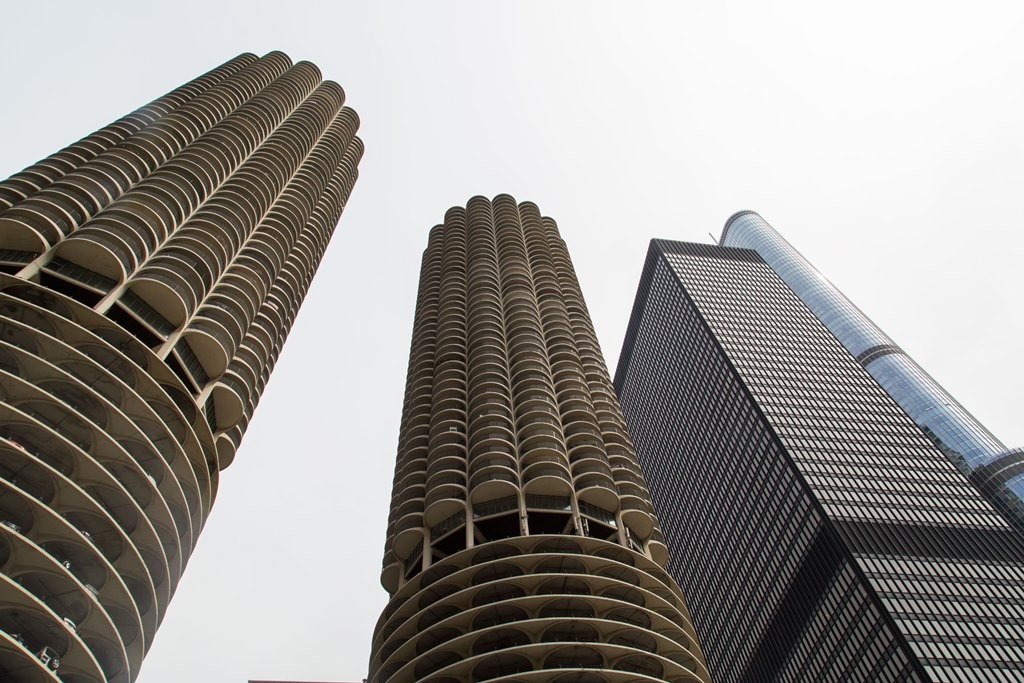 Boeing International Headquarters, often called the Boeing Building, is a 36-floor skyscraper for Boeing, a corporation that designs, manufactures and sells airplanes, rockers and satellites. Previous companies in the building were Morton Salt Company and Ameritech, also known as AT&T. The building won the “Most Innovative” design award from the Structural Engineers Association of Illinois. 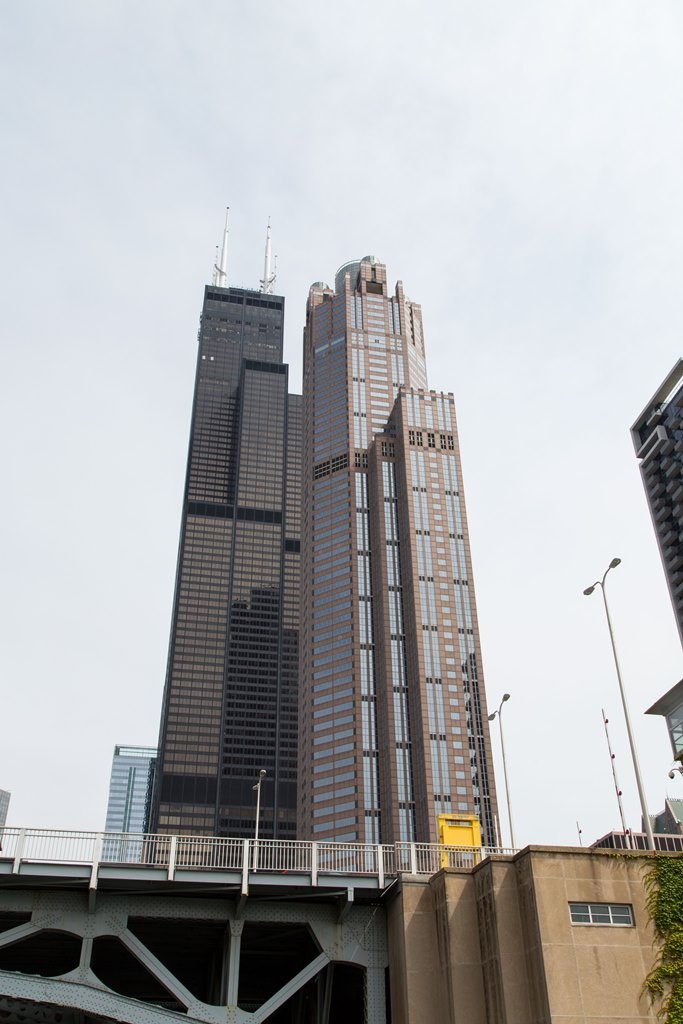 Wolf Point is where Chicago started in 1833 and is the meeting point of all three Chicago River branches. It was home to Chicago’s first three taverns, first hotel, first ferry, first drug store, first church, first bridge… the first of many Chicago buildings were found here.

Shoreline Sightseeing is now in its third generation of family ownership and celebrated its 75th anniversary in 2014. It has kept its family values, which shine through with its welcoming staff, clean boats and decent prices. Disappointed is the last word I would use to describe my experience on Shoreline’s Architectural River Tour—with tour guide Adam’s punch lines, the wind blowing through my hair, a lemonade in hand and the skyline in the background, my experience was just as majestic as I thought it would be. 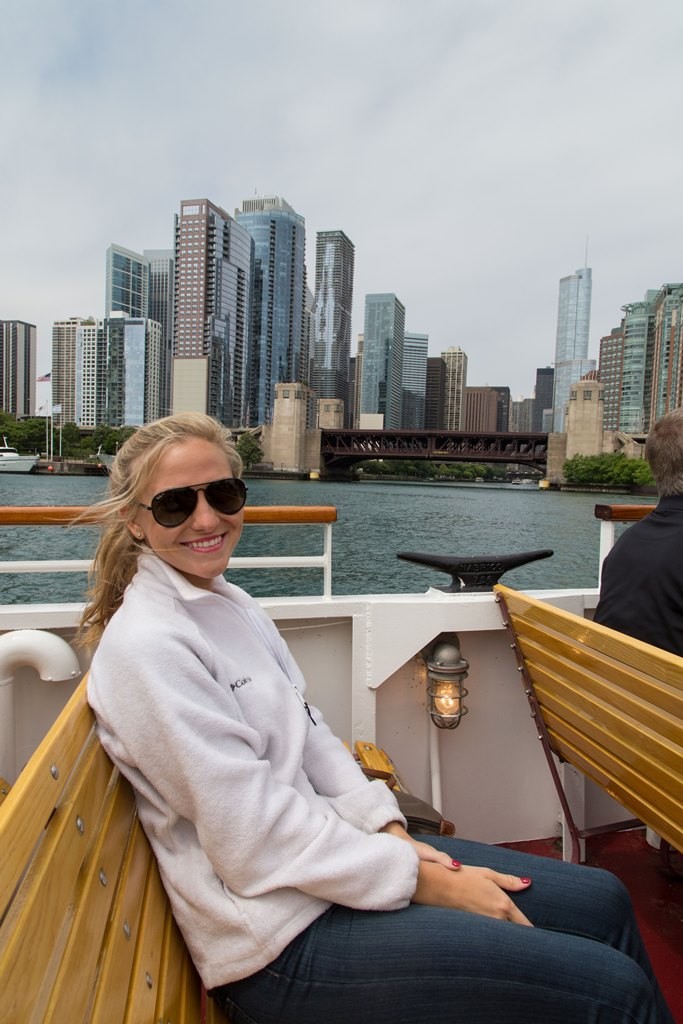