Sampling the History and Culture of Morocco 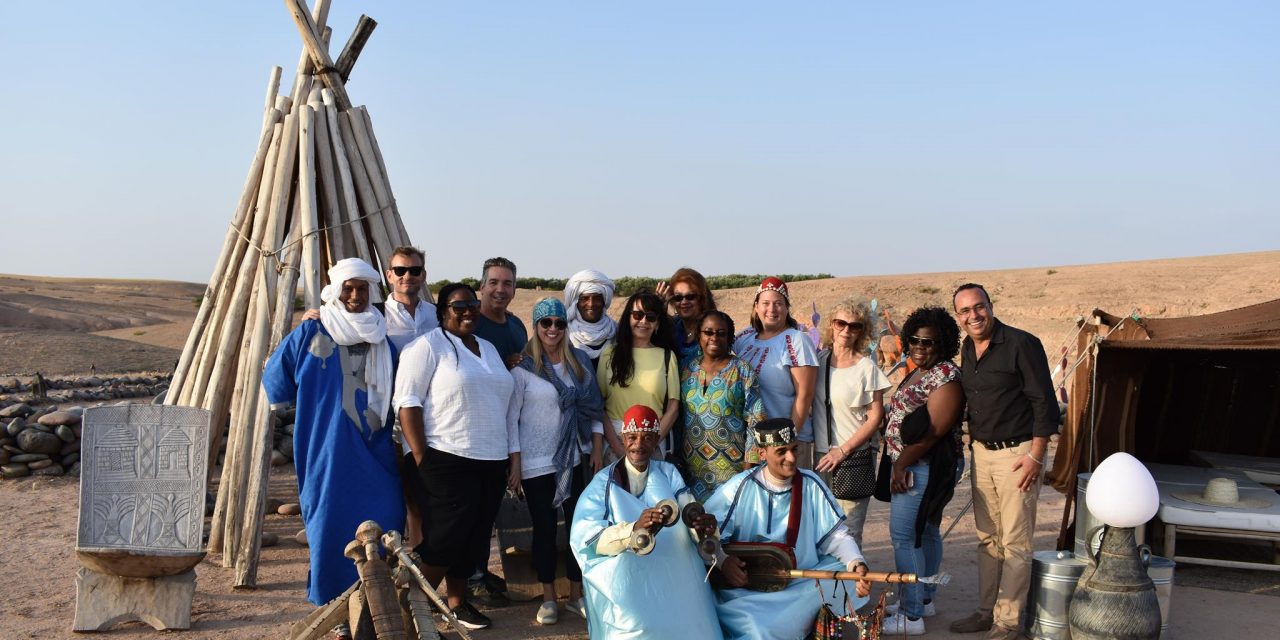 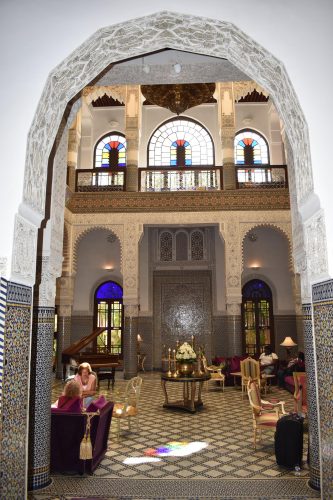 Architectural gems can be found throughout the country.

Morocco is a place like no other. Its long and diverse history was forged in the fires of religion, monarchy and colonization, and tempered by a spirit of cooperation, community and friendliness. Modern life and ancient traditions blend to create a unique medley of experiences in this not-to-be-missed destination.

Morocco’s geographical variety is as diverse as its history. Ideally perched on the northwestern coast of the African continent, it is a mere nine mileshttps://leisuregrouptravel.com/american-plans-n…o-eastern-europe/ from the Spanish coast. Cradled by the rejuvenating hands of both the Atlantic Ocean and Mediterranean Sea, it also is abutted by the harsh beauty of the Sahara in the south. It is one of the few countries on Earth where you could be surfing in the morning, alpine skiing in the afternoon and camping in the desert at nightfall.

While exploring, don’t be fooled by the plain, uniform facades of the buildings lining the streets. This is merely a cultural paradigm to express humility and respect for those of varying means and reflects the humble attitude of the people themselves.

Whether it is a riad (traditional house), palace, school or place of worship, behind some of those unassuming doors lies architectural opulence that defies photographic capture. Be prepared to spend a good amount of time just sitting and absorbing the intricate tile mosaics, carved wooden surfaces and impossibly detailed metalwork that took artisans months or even years to complete.

A melting pot of indigenous Berber, Arab, African and European influences, Morocco boasts a comparatively forward-thinking and tolerant political and religious environment that sets it apart from some of its more turbulent and repressive neighbors. Not once did I feel threatened or unsafe, and like most cultures, if respect and courtesy are given, they are usually returned.

Learning a few simple words in Arabic, such as sabah alkhyr (good morning) and shukraan (thank you) will yield the grateful smiles that always cross language barriers. Moroccans are not short on hospitality either, so be prepared to drink a lot of mint tea, which is provided as a traditional greeting to guests (and is delicious by the way).

The City of Fez 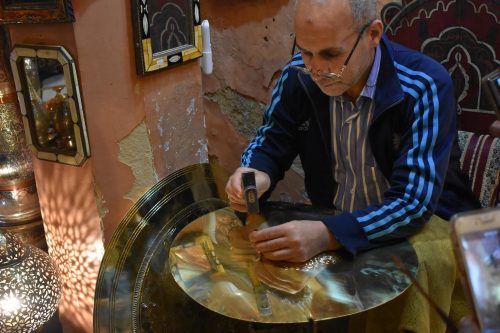 Oft overlooked by the independent traveler, yet not to be missed, Fez offers rich experiences and a deep cultural history. Founded in the 9th century and becoming the largest city in the world between 1170 and 1180, Fez reached its height during the 13th and 14th centuries under the Marinids when it boasted the title of imperial capital. In this ancient epicenter for scholars, imams and artisans, it is possible to 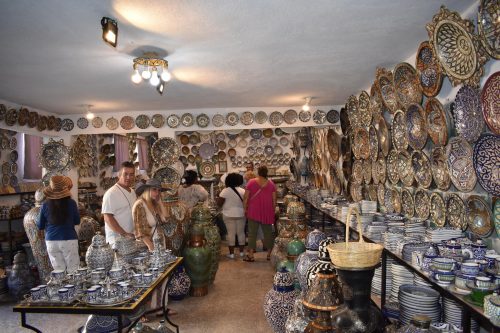 his ancient epicenter for scholars, imams and artisans, it is possible to One of a kind ceramics are a must buy.

view glimpses of its honored past even today.
In the heart of Fez lies the medina, one of the largest pedestrian-only zones in the world. Its twisted maze of bustling, narrow streets, houses and souks (shops) holds treasures around every corner. However, I recommend that you grab a trusted guide and adequately prepare your group before venturing inward.

Even for experienced travelers, the assault on the senses can be overwhelming. The rich odors (both pleasant and foul), uncommon sights (from beautiful mosques to vendors selling severed goat heads) and the reduction in space (both total and personal) can leave you swimming gleefully through the ocean of cultural enlightenment or feeling drowned by it.
The rewards for boldly venturing forth are numerous, however, so don’t shy away. Ancient cultural gems like the Jewish quarter, the magnificent imperial palace and the oldest continuously functioning university in the world await to be discovered, while impeccably skilled artisans use age-old techniques to produce some of the most beautiful pottery, textiles and metalwork to be found anywhere.

For good or ill, the medina of Fez is like few other experiences in the world and is guaranteed to leave an impression on every member of your group.

Travel Tip: Be on the lookout for cheap imitations in the medina—they abound. Also, Morocco is a haggling culture, so often the initial price is three to four times what you can get the item for. Here again is where an experienced guide is invaluable (mine saved
me $50 on a leather bag).

The City of Marrakesh 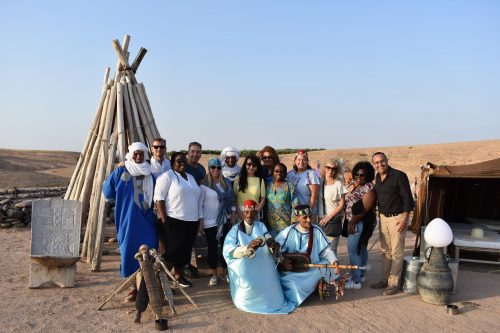 Members of tour group get
a taste of local culture at
Agafay Desert Luxury Camp
outside of Marrakech.

Also known as the “ochre city” due to the reddish color of the sandstone historically used for construction, Marrakesh pulses with a chaotic mix of modern lifestyle and proud tradition.
Founded in the 11th century and bolstered by the construction of numerous mosques, madrasas (Koranic schools) and palaces during the following centuries, Marrakesh served as the imperial capital multiple times during the last thousand years and is arguably the most cosmopolitan and economically important metropolis in Morocco.

Here you will find broad avenues lined with high-end retail stores, upscale restaurants, purpose-built hotels and trendy clubs. These are countered by the leathery street vendors in their souks, traditional hand-made delicacies of all kinds, intimate lodgings in refurbished riads and family-owned cafes in which to enjoy an evening tea and soak in local life. 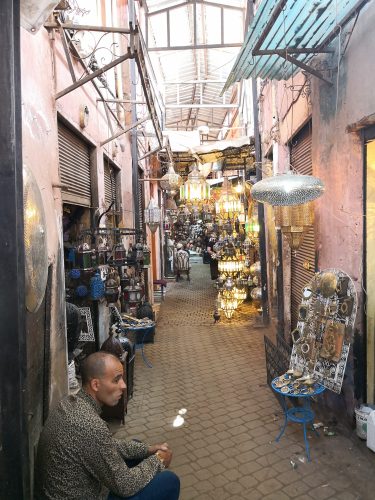 Deep in the medina of Marrakech lie both treasures and knockoffs,
so travelers should shop wisely. Expect to haggle over price.

For those seeking cultural enrichment, options abound. Experience the indigenous villages of the Berbers in the nearby Atlas Mountains, stroll up the rose-bordered courtyard to the beautifully ornate Minaret Koutoubia, marvel at the cultivated oasis of the Jardin Majorelle, visit the ruins of the once unrivaled Badia Palace and Saadian Tombs, or just wander around the backstreets of the medina.

Travel Tip: While not as imposing as the medina of Fez, an experienced guide is recommended here as well. Not only to help you find trusted vendors and navigate the labyrinthine streets, but also to help with crucial decisions, such as which live snake to permit the charmers to put around your neck.

The varied types of experiences and options available within those experiences for your group are so numerous and customizable that I suggest you do what I did, reach out to A&S Signature Journeys. Tell them what your needs and desires are and marvel at their ability to create a trip specifically tailored to your group.
-Lance Harrell