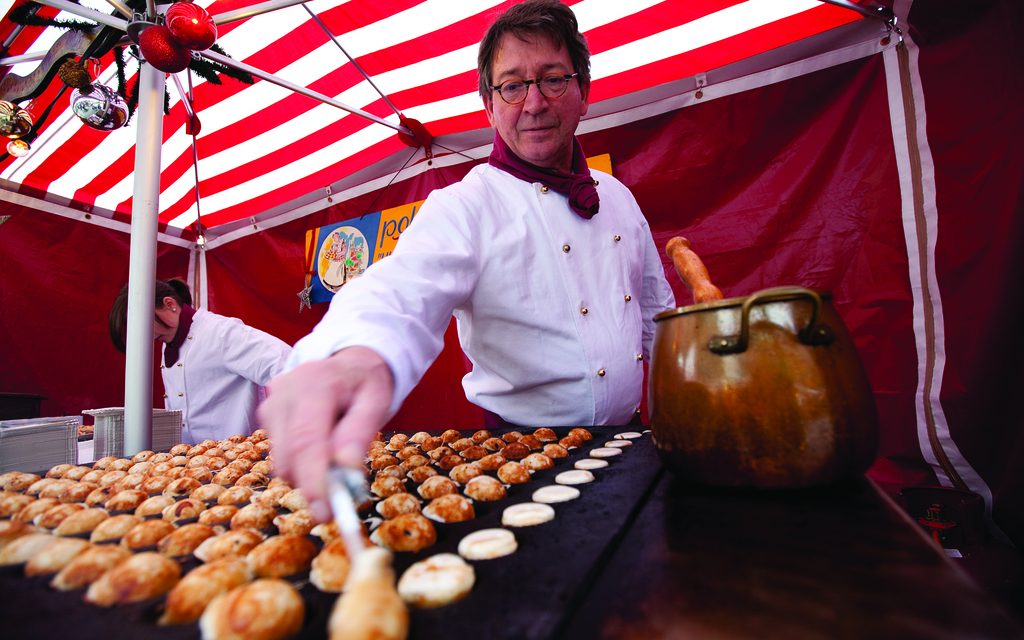 Old World charm and a touch of edginess enchants travelers in the city of canals, bicycle traffic, Rembrandt and Anne Frank.

Prior to my recent visit to Amsterdam, I pored over guidebooks and daydreamed of poking around footloose and fancy-free, just as I did there as a young vagabond in the early 1970s, when Amsterdam was the ultimate hippie haven and free spirits from around the world thronged Dam Square. 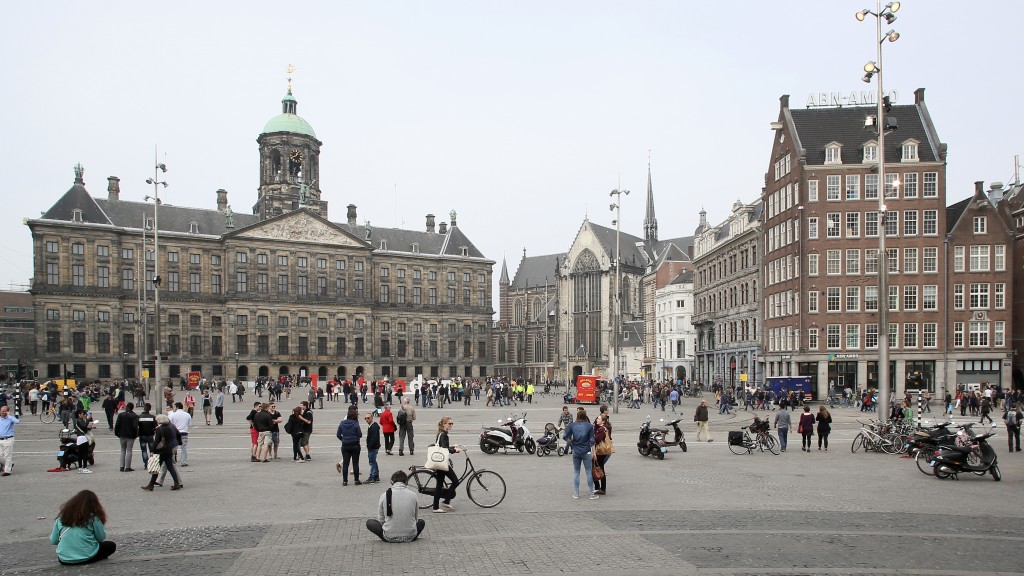 Anything still goes in the Dutch capital, an extremely tolerant place where soft drugs are sold over the counter and prostitution is legal. But if the edgy side of Amsterdam lacks appeal, it’s heartening to know you can commune with the distant past at museums, churches and canalside mansions while traveling back in time to Holland’s Golden Age—the 17th century glory days when it was a trading powerhouse and Dutch masters ruled the art world.

First-time visitors invariably zero in on the trio of most popular sights—the Riksmuseum, Van Gogh Museum and Anne Frank House. As an alternative to standard sightseeing, take the pressure off by hitting the streets and exploring at whim, on foot or bicycle. Slow down and focus on prowling the markets, chilling in parks or nursing a Heineken at a time-worn tavern or sidewalk cafe. Take time to frame pictures of flower vendors, stately steeples and tree-lined canals flanked by storybook buildings oozing with Old World charm.

A canal boat trip, an Amsterdam staple that I initially thought would be too touristy, makes a good introduction to Amsterdam, a city laced with 165 canals threading 90 artificial islands. And it’s nice to be away from the car and bike traffic. 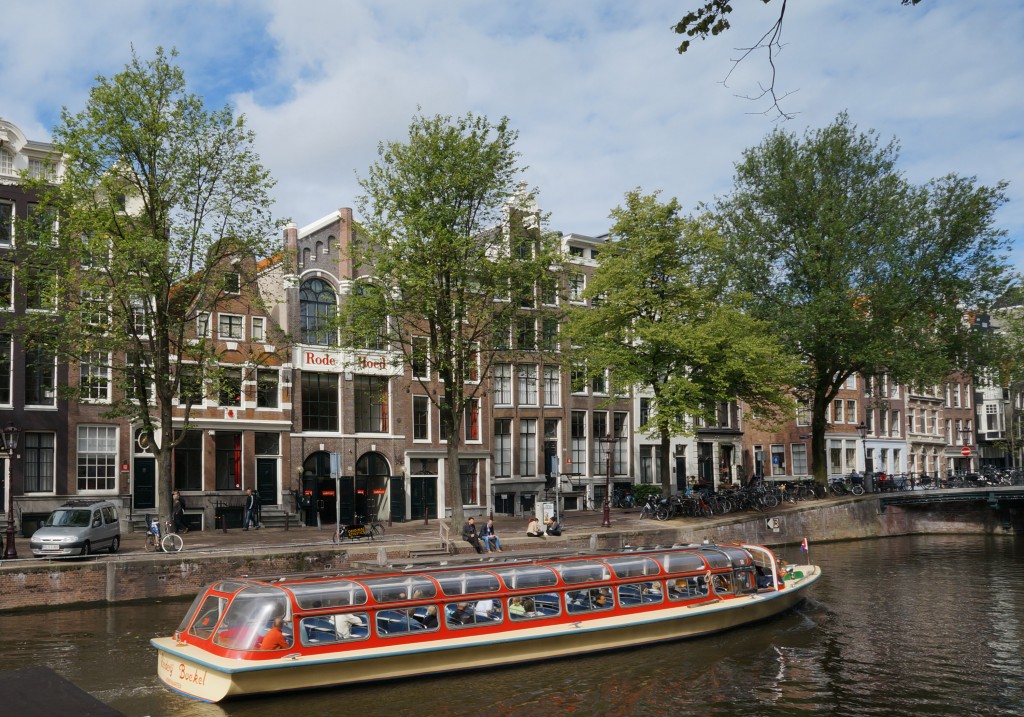 Cycling is a common way for locals and tourists to get around Amsterdam— and throughout the pancake-flat Netherlands, much of it below sea level. But pedestrians need to be vigilant. The biggest danger for tourists in Amsterdam is straying into a bike lane. The Dutch may be a friendly people, but once on a two-wheeler, our tour guide confided, “the beast in us comes alive….We feel like kings and queens on our bikes.”

The Netherlands’ top treasure house, the Rijksmuseum, presents a heady array of classic Dutch art. Reopened in its entirety in 2013 after a 10-year renovation, the Victorian Gothic building, studded with turrets and towers, deserves at least two hours. Most visitors plunge right into the Golden Age by making a beeline to the Gallery of Honor, where portraits, still lifes, landscapes and everyday scenes painted by the likes of Rembrandt, Vermeer, Hals and Steen take center stage. The most famous work is Rembrandt’s The Night Watch (1642), a huge canvas depicting Amsterdam’s civic guards. 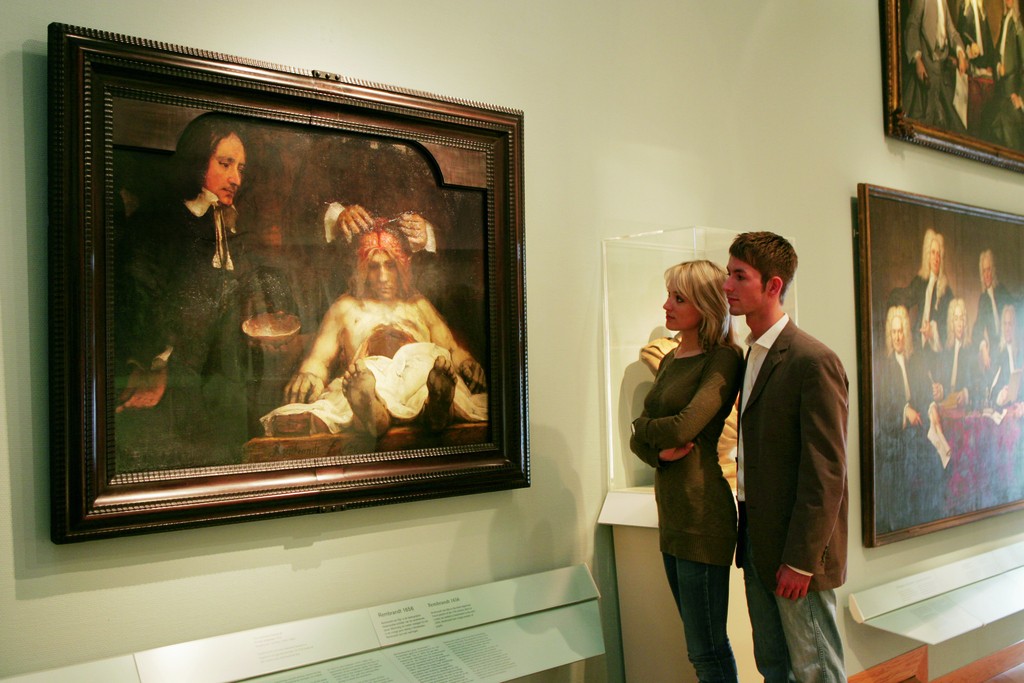 The Rijksmuseum houses the works of Rembrandt (above) and other Dutch masters.

Across the park-like square (Museumplein) from the Rijksmuseum awaits the largest collection of paintings and drawings by the greatest Dutch artist of the 19th century—Vincent Van Gogh. Must-sees at the Van Gogh Museum include The Potato Eaters, Sunflowers, The Bedroom and self-portraits of the troubled man who committed suicide in 1890 at age 37.

Coming face-to-face with legendary art certainly leaves a lasting impression, but your memories of the humble hiding place of eight Amsterdam Jews during World War II will linger longer. At the Anne Frank House, a four-story building facing the Prinsengracht canal, it’s a powerful experience going behind the bookcase concealing the Secret Annex and up the steep stairs to view the austere, unfurnished backrooms that served as living quarters for two years until the occupants were betrayed and deported. Newsreel footage, exhibits on the Holocaust, and video interviews with father Otto Frank and family acquaintances enhance the emotional visit. Displayed under glass are pages from the diaries of young teenager Anne Frank, who died in a Nazi concentration camp. Her writings of life in hiding were first published in 1947 and went on to become one of the most widely read books in the world. 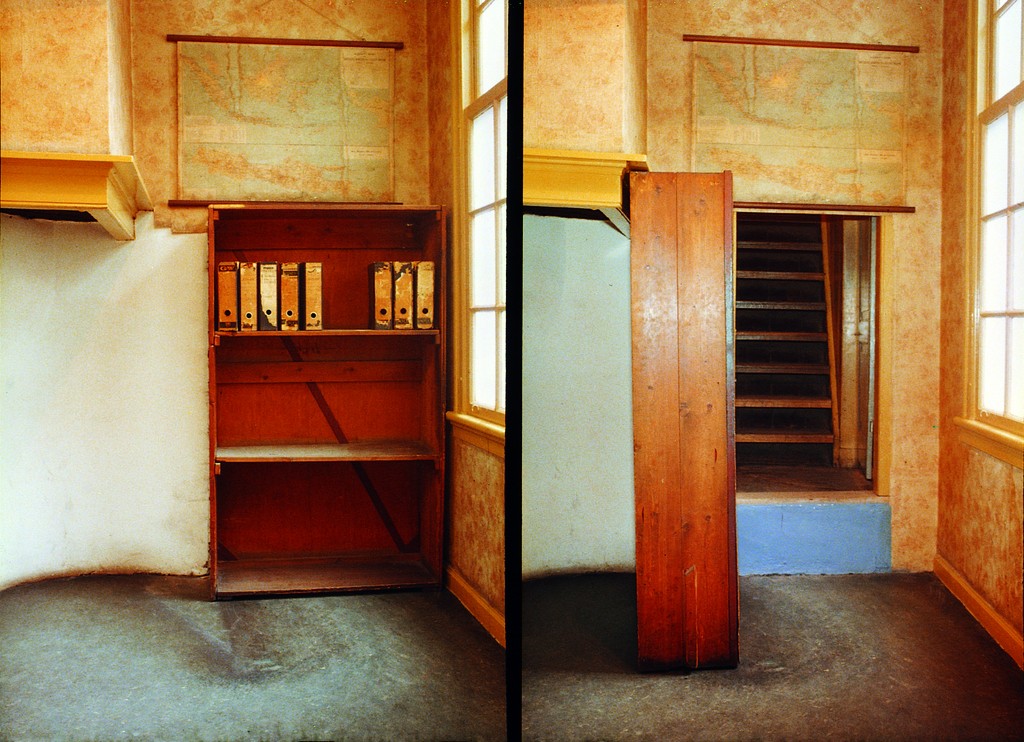 Entrance to the Secret Annex at the Anne Frank House in Amsterdam.

I’ve always been fascinated by stories of the Holocaust and World War II, so I devoted an afternoon to Southeast Amsterdam’s former Jewish Quarter, now called the Jewish Cultural Quarter. Of prime interest is the Jewish Historical Museum, a complex of four Ashkenazic synagogues dating back to the 17th and 18th centuries. An excellent audio tour sheds light on Judaism and Jewish life in the Netherlands, including the Holocaust and life after the war. Your ticket also grants admission to the Portuguese Synagogue, across the street.

Another unit of the Jewish Historical Museum is the Hollandsche Schouwburg (Dutch Theater), the shell of a Jewish theater that serves as the national Holocaust memorial. Inside the building, a short walk from the Portuguese Synagogue, Jews suffered in filthy conditions as they awaited deportation to Dutch transit camps, the last stop before being herded into train cars to Nazi extermination camps. A 20-minute movie shows what happened at the theater and afterwards.

For a slice of local color in the old Jewish neighborhood, browse the Waterlooplein Flea Market, started by Jewish traders in 1880. Nearby is the Rembrandt House Museum, a three-story building where the artist lived and worked from 1639-1658.

The Dutch Resistance Museum, also in Southeast Amsterdam, tells the plight of Jews and non-Jews during German occupation from 1940-45. Vintage photos and film clips document clandestine operations, workers’ strikes, creative plans for hiding people, and Amsterdam’s terrible food shortage during the winter of 1944-45, when thousands starved.

Dam Square, not far from the infamous Red Light District, has always been the symbolic heart of Amsterdam. Street performers entertain, and the area abounds with department stores, fashion boutiques and souvenir shops. The Royal Palace, facing the square, hosts state functions and serves as an occasional residence of the Dutch royal family.

Another shopping magnet is centered around the Bloemenmarkt, the “floating” flower market on permanently moored barges in the Singel canal. This is the place to bag your Dutch tulip bulbs. Souvenir shops across from the flower sellers specialize in cheese, offering generous free samples of Gouda, Edam and other varieties. 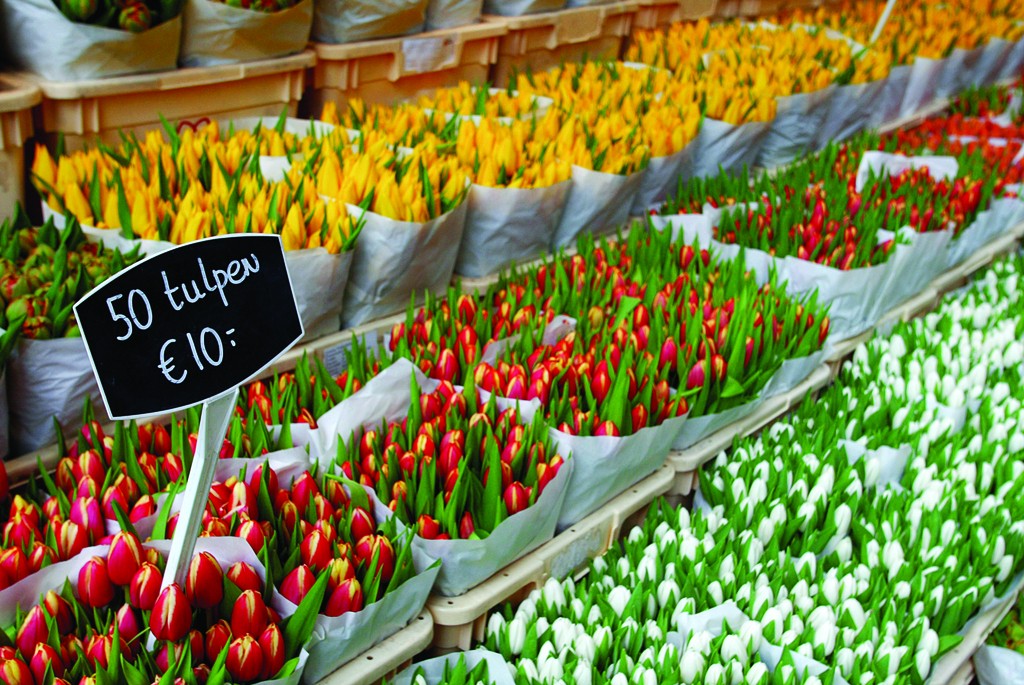 For a quick bite to eat while touring Amsterdam, try some typically Dutch foods. Kroketten (croquettes), commonly dispensed by a vending machine, are deep-fried logs of dough with meat or vegetable fillings. Or treat yourself to a plateful of poffertjes, light, puffy mini-pancakes sprinkled with powdered sugar. A favorite treat of mine was the stroopwafel (syrup waffle), two thin waffle disks stuck together with syrup, best enjoyed hot and gooey from a street vendor.

I made a point of having a quintessential Amsterdam experience at brown cafes (so called for their smoke-stained walls and ceilings). These down-to-earth pubs are cheery spots to soak in the local vibe. At Cafe t’Hooischip I enjoyed a piping-hot bowl of erwtensoep, the traditional Dutch pea soup.

Heineken and Amstel (same ownership) are the most common beers in Holland, and it seems every block in central Amsterdam sports their lighted signs. The Heineken Experience, an interactive, self-guided tour in the former brewing plant, tells the company’s story in a fun way and includes two drinks. The gift shop sells Heineken logo items, from bikini briefs to luggage, towels, and other bright green stuff. Have a glass engraved with your name, a fitting reminder of your visit to the Dutch capital.

Amsterdam Sightseeing Tips: To beat the lines at the Rijksmuseum, Anne Frank House and Van Gogh Museum, it’s wise to book tickets online before leaving home. Bearers of the handy I Amsterdam City Card get admission to most major sights, plus a canal boat cruise and unlimited bus, tram and metro rides. Cost is about $65 for 48 hours, $77 for 72 hours and $88 for 96 hours. (www.iamsterdamcard.com)

Recommended Guidebooks: Rick Steves’ Amsterdam, Bruges & Brussels (Avalon Travel, 654 pp., $21.99) artfully captures the pulse of Amsterdam, offering a good choice of reasonably priced places to eat and stay. It is especially strong on what to see in the major museums. With a younger traveler in mind, Lonely Planet’s Amsterdam (327 pp., $21.99) has color maps and leaves few stones unturned in a thorough look at all city neighborhoods.