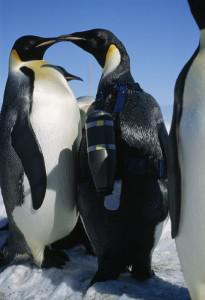 Groups with visions of traveling 20,000 leagues under the sea will find that Mystic Aquarium is in a league of its own. Offering oceans of fun for visitors, it’s also a highly respected research institution with programs, exhibits and a focus that differentiate it from other marine life attractions.

“Unlike most aquariums,” he said, “we’re both indoors and outdoors, spread out over 19 acres.”

Secondly, Mystic Aquarium’s emphasizes marine mammals, Glankoff said.  Most famous are the three adult beluga whales, icons of the aquarium. (Mystic is one of the few aquariums in North America with belugas.) Steller sea lions (the largest of all sea lions) and endangered African penguins also live there.

Glankoff said the aquarium is constantly “pushing the boundaries” when it comes to visitor interaction with animals. Besides grabbing a crab, lifting a lobster or scooping up a sea star in the Discovery Lab touch tank, guests can feed fish to rays at Stingray Bay and, for an extra cost, take part in special animal encounter programs.

Glankoff said the aquarium offers many ways to customize visits for groups. For example, a behind-the-scenes tour might give the inside scoop on how animals are fed. For student groups interested in marine biology, it can arrange a meeting with a biologist. Groups can even have their own private sea lion show or reserve the Nautilus Live Theater, which presents live satellite transmissions from the E/V Nautilus, the exploration ship of Dr. Robert Ballard, the famed oceanographer who discovered the Titanic in 1985. 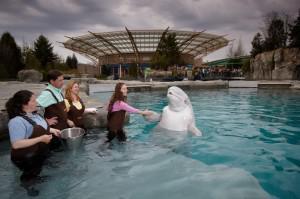 The aquarium’s association with Ballard brings it a mantel of prestige that other aquariums must envy. The Institute for Exploration, based at the Mystic Aquarium campus, was founded by Ballard (its president); both are divisions of the non-profit Sea Research Foundation. His discoveries of the Titanic, Bismarck, PT-109 and other ships are featured in the aquarium’s Challenge of the Deep exhibition building, which introduces guests to the emerging science of deep-water archaeology.

Shows in the Nautilus Live Theater include footage from Ballard’s previous expeditions, an intimate interview, and the latest news on shipboard activities and recent findings. Guests virtually join the current expedition as they talk with a Nautilus member and watch images from the ocean floor in real time. The National Geographic Society, an expedition partner, films many of the voyages and builds programs around them for the National Geographic Channel. Last year the Ballard team went to the Black Sea and Aegean Sea to map the sea floor, study underwater volcanoes, investigate unusual life forms and explore shipwrecks.

The Challenge of the Deep hall will close Nov. 30 to be transformed into the Ocean Exploration Center. Set for an April 2012 opening, the new exhibit space, partly funded by a $1-million donation from United Technologies Corp., will highlight the history of human undersea exploration, with emphasis on Ballard’s expeditions. Included will be seven distinct exhibit galleries, a Titanic exhibit, 4-D motion theater with a deep dive show and an indoor/outdoor plaza with covered dining area. The Ocean Exploration Center also will encompass the Nautilus Live Theater.

In a temporary exhibition opening Feb. 9, Mystic Aquarium visitors can vicariously swim through tropical landscapes with turtles, dive beneath the ice with penguins and forage in the forest with a family of bears. “National Geographic Crittercam: The World Through Animal Eyes,” a traveling exhibition developed by the National Geographic Museum in Washington, D.C., will run through Nov. 30. Crittercam is a scientific video- and data-gathering tool safely worn by wild animals, offering researchers insights into animal behavior. The exhibit focuses on Crittercam’s deployment on seals and sea lions, sharks, sea turtles, whales, penguins, bears and lions.

Popular stops on the main exhibit floor include Shark Encounters, where guests can walk right up and touch the backs of white-spotted bamboo sharks. Larger sand tiger and nurse sharks swim in Shark Lagoon. Moray eels, barracuda, jellies and Charlotte the green sea turtle also reside on the main floor. See poisonous frogs and schools of piranha in Hidden Amazon.

The aquarium’s Arctic Coast, more than an acre in size and holding more than 750,000 gallons of water, is home to one of the nation’s largest outdoor beluga exhibits. Groups as well as individuals can book encounter programs with whales and trainers. The “Whales Up Close” option in a behind-the-scenes area of the Arctic Coast takes guests within just a foot of a whale, with only a three-foot-high window separating them from the 11-foot-long, 1,000-pound mammal. Penguin encounters also are available.

For groups interested in having a meal, the aquarium’s own Ocean Blue Catering can serve up anything from a boxed lunch to a plated dinner. Glankoff said the catering service is a “mainstay of our overall operation here….They can package, they can customize, they can turn on a dime.”