Museum of the American Revolution 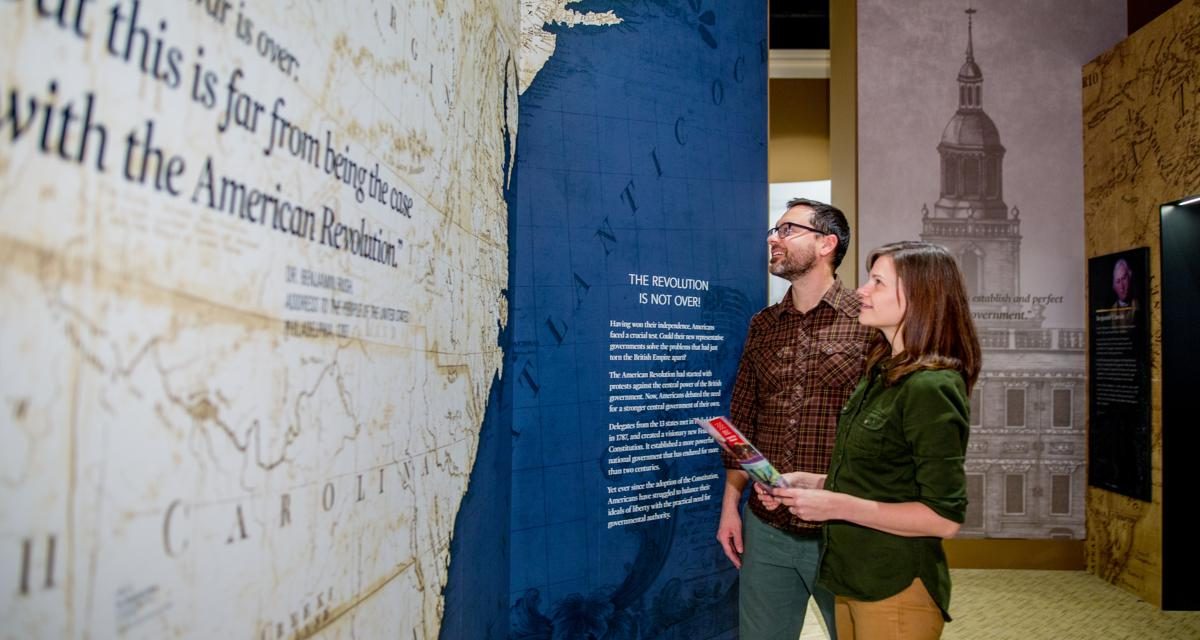 Snce its opening a year ago this April, group organizers looking to include Philadelphia’s most buzzworthy sight in their tour itineraries have been marshalling their troops for visits to the Museum of the American Revolution. Located just two blocks from Independence Hall, the new attraction tells the story of our nation’s founding through artifacts, theater experiences, digital displays and hands-on activities.

On a chronological journey from the roots of conflict in the 1760s through the creation of the American republic, visitors learn about the rise of the armed resistance to British taxation, the drafting of the Declaration of Independence, the long years of warfare and the Revolution’s continuing relevance.

In the first-floor orientation theater, guests are swept up in the heart-pounding drama of the times through the introductory film Revolution. In immersive theaters in the second-floor exhibit galleries, they can watch an angry mob tearing down the statue of England’s King George III in New York City and the back-and-forth among Continental Congress delegates at Independence Hall as they debate whether to declare American independence. Another theater presentation puts audience members on the front lines of the Battle of Brandywine, with a rumbling floor, smoke effects and the smell of gunpowder.

Recreating historical moments, more than 20 life-like figures appear individually or in historical vignettes, or tableaux, that recall particular incidents during the American Revolution. Scenes include a brawl among Revolutionary soldiers broken up by George Washington in Harvard Yard. 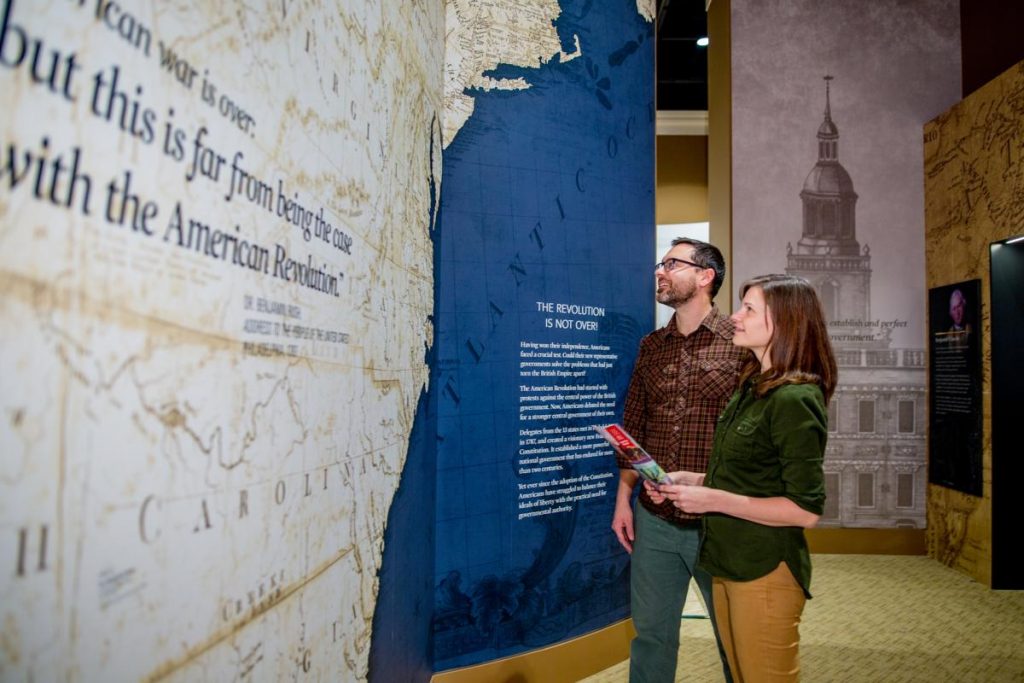 The museum’s inclusive approach explores the personal stories of the diverse range of individuals who were part of establishing the nation, including laborers, farmers, seamen, women, native people, and free and enslaved people of African descent. Visitors, for example, will listen to members of the Oneida Indian Nation debate whether to support the Revolutionary cause and examine artifacts like child-size slave shackles and a signed 1773 volume of Poems on Various Subjects by Phyllis Wheatley, America’s first published black female poet.

One digital interactive allows museum goers to explore the experiences of enslaved African-Americans in Virginia in 1781 through a touchscreen based on the lives of five men and women who followed different paths to seek freedom during the Revolutionary War. Another lets visitors virtually handle weapons to learn more about their uses, owners and makers.

In addition to digital installations, visitors enjoy hands-on experiences throughout the exhibition. They can mix-and-match pieces of a soldier’s uniform to learn about how soldiers displayed their loyalties; learn about the common soldiers and their families who endured the harsh winter at Valley Forge with flip-doors that explore the complex workings of a war camp; assume George Washington’s role as president of the Constitutional Convention by sitting in a reproduction of the “Rising Sun” chair; board an 18th century privateer ship; and try their hand at an early American stitching lesson in a gallery on the role mothers played in educating children as citizens.

The museum’s collection of historic artifacts, one of the best of its kind, ranges from silver camp cups from Gen. George Washington’s field equipment and a religious book signed by Martha Washington to an elaborately decorated mug wishing “Liberty Forever” to the town of Boston. Also displayed are diaries, fine art, newspapers, books, colonial currency and rare military firearms.

The crown jewel of the collection, however, is Washington’s War Tent, which served as the general’s office and sleeping quarters from mid-1778 until 1783, including throughout the 1781 Siege of Yorktown, the last major land battle of the war. In fact, the canvas tent is the focal point of a 12-minute multimedia presentation in a dedicated, 100-seat theater, a signature museum experience that builds to the dramatic tent reveal. Created for use as a mobile headquarters during the Revolutionary War, the tent was made in Reading, Pennsylvania while Washington was camped at Valley Forge in 1778. Measuring 23 feet long by 14 feet wide, it comprises three chambers, including an area for luggage and sleeping quarters for his enslaved African- American valet, William Lee, who traveled with Washington through the entire war.

The culminating experience of the core exhibition is the Legacy Theater, where visitors are invited to reflect on the struggle to create the first modern democracy and the ongoing responsibility to perpetuate the ideals the nation was founded on. In one display, museum-goers have the extraordinary opportunity to see the faces of the Revolutionary generation through a collection of photographs of 70 people who lived through the American Revolution and survived into the age of photography.

Adult group tickets (for groups of 15 or more) are $12 each; student group tickets are $10 each. Group visits are generally selfguided, but a one-hour “Museum Highlights Tour,” using headsets to follow along with the guide, is available for an additional $10 per person. Programs on various topics (Revolutionary women, historic firearms, the city of Philadelphia, etc.) can be arranged in the museum’s classroom for $7 per person.

For more information on the Museum of the American Revolution, visit amrevmuseum.org. The group sales manager is Alison English, groups@amrevmuseum.org; 267-579-3525.