MONTANA: The Best of the Last Best Place

Wildlife and history come in second and third on the list of reasons for visiting and Montana has an abundance of these attractions as well. Whether you explore the state’s most popular sites or prefer to get way off the beaten path, it is easy to see why Big Sky Country has been dubbed The Last Best Place. 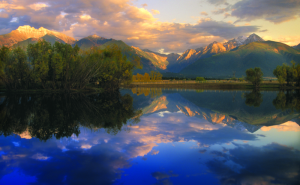 The most visited place in Montana is Glacier National Park, known as the Crown Jewel of the Continent. It lies along Montana’s northern border and adjoins Waterton Lakes National Park in Canada, forming the world’s first International Peace Park.

Spotting wildlife is thrilling to adults as well as children. Deer, elk, rocky mountain goats, birds including eagles and bighorn sheep are often seen, as well as some moose, beaver and hoary marmots. For an almost-guaranteed view of mountain goats, walk the 1.5 mile Hidden Lake Trail south from the Logan Pass Visitors Center at the top of the park’s Going-to-the-Sun Road.

The Going-To-The-Sun Road is one of the best-known features of Glacier. It is a 50-mile historic highway that climbs up and over the park’s mountainous backbone. The spectacular views are obvious but don’t overlook the less obvious pull-outs where a very short walk wins you a view such as a waterfall gushing at right angles at Sunrift Gorge or clear, green water rushing over pink rock at Avalanche Creek.

Montana also serves as the gateway to Yellowstone National Park with three of Yellowstone’s five entrances – the North Entrance at Gardiner, the Northeast Entrance at Cooke City and the West Entrance at West Yellowstone. It was the world’s first national park, and in the minds of many, it is still first for its scenery, beauty and wildlife. Yellowstone’s geothermal features, such as the world-famous Old Faithful, were the original attractions. Within the park’s boundaries are 10,000 thermal features and about 300 active geysers. That’s enough to give Yellowstone two-thirds of all geysers found on earth. Other major draws are the inspiring Grand Canyon of the Yellowstone featuring the 308-foot-high Lower Falls, fossil forests and Yellowstone Lake covering 136 square miles. 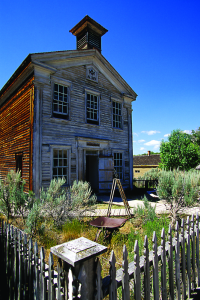 The ways of the old west are presented as living history at attractions such as the Grant-Kohrs Ranch National Historic Site in Deer Lodge and the Ninemile Historic Remount Depot near Missoula. You’ll see working blacksmiths and teams of horses and the way life used to be.

Memories of the Gold Rush Era can be visited in the many ghost towns which abound in the mountains of southwestern Montana. Saunter down the streets of the restored 1800s communities of Virginia City and Nevada City for a first-hand look at life in the golden days of the mining boom. Montana’s first territorial capital, Bannack, has been preserved as a ghost town state park along once gold-laden Grasshopper Creek. Many other ghost towns are also open for visitors.

The “Old West” comes to life through the brush and sculpture of famed western artist Charlie Russell at the Charles M. Russell Museum Complex in Great Falls. You’ll not only see the world’s largest collection of Russell’s work, but you’ll be able to visit his original log-cabin studio and his Great Falls home. 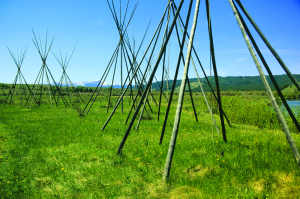 Eastern Montana’s High Plains stand in stark contrast to the western part of the state. Here, mountains give way to buttes, rimrocks, isolated mountains – called island ranges – and grazing land stretches far beyond what the eye can see. This is where Montana’s Big Sky Country nickname really rings true.

It was in this setting, just south of Billings, that Lt. Col. George Armstrong Custer and his troops made their last stand. At the Visitor Center for the Little Bighorn Battlefield National Monument you can take a guided tour of the battlefield and see what the warriors on both sides of the conflict beheld. Towards the end of June each year Battle of the Little Bighorn reenactments take place near Hardin and Crow Agency. In August of each year the Crow People, whose reservation covers this area of Montana, host their yearly celebration – Crow Fair – in virtually the same locale as the Indian people Custer came upon on that fateful day in 1876.

Five of the state’s seven Indian Reservations are located east of Montana’s Continental Divide and many of the state’s Old West activities take place here. In fact, it is here that Old West and New West melt together into a lifestyle that visitors around the world are invited to enjoy through the area’s many guest ranches, wagon trains, cattle drives, rodeos and community celebrations.

You won’t be the first group ever to traverse the Last Best Place. But you just might feel that way. MontanaGroups.com