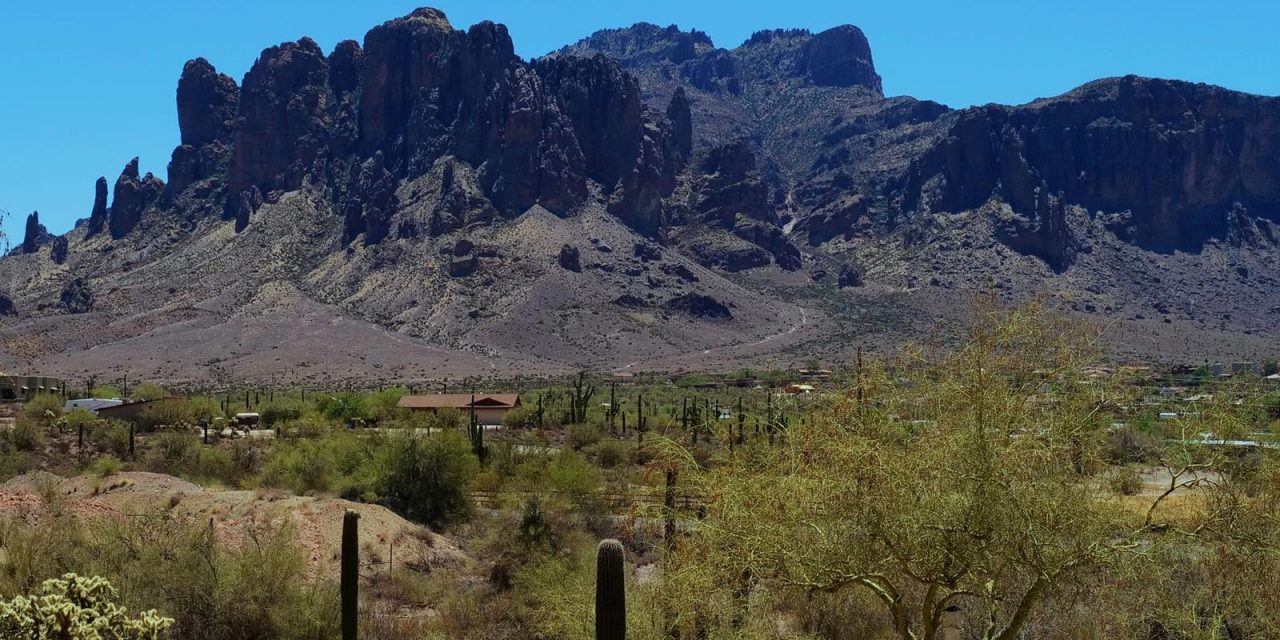 For a breath of fresh air and some eye-opening vistas, groups touring Mesa and the Valley of the Sun can get off the busy highways and enjoy a day full of discoveries on one of the state’s premier scenic byways—the Apache Trail.

Also known as U.S. Route 88, the winding road through the Superstition Mountains makes a satisfying day trip, highlighting vestiges of the Old West and the beauty of the Sonoran Desert. The road once served as a stagecoach and freight wagon route from Mesa to Globe. 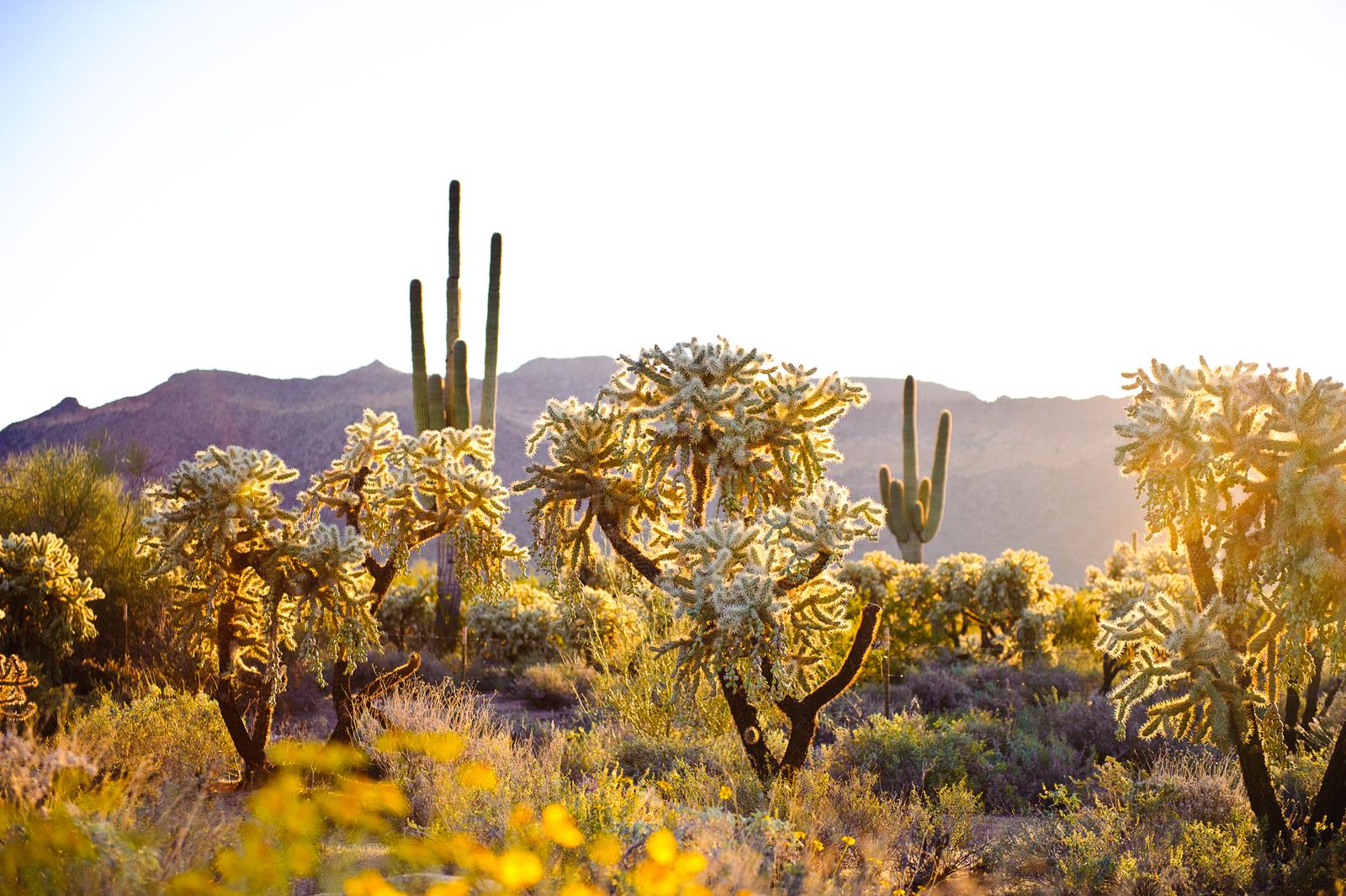 The Apache Trail, as we know it today, was built more than a century ago to provide access to the Roosevelt Dam construction site. Completed in 1905, the trail is named for the Apache Native Americans who helped pave the treacherous path.

When describing the 40-mile drive to the dam, President Theodore Roosevelt, for whom the dam is named, declared that the area “combines the grandeur of the Alps, the glory of the Rockies, the magnificence of the Grand Canyon and then adds an indefinable something that none of the others have; to me, it is most awe-inspiring and most sublimely beautiful.” 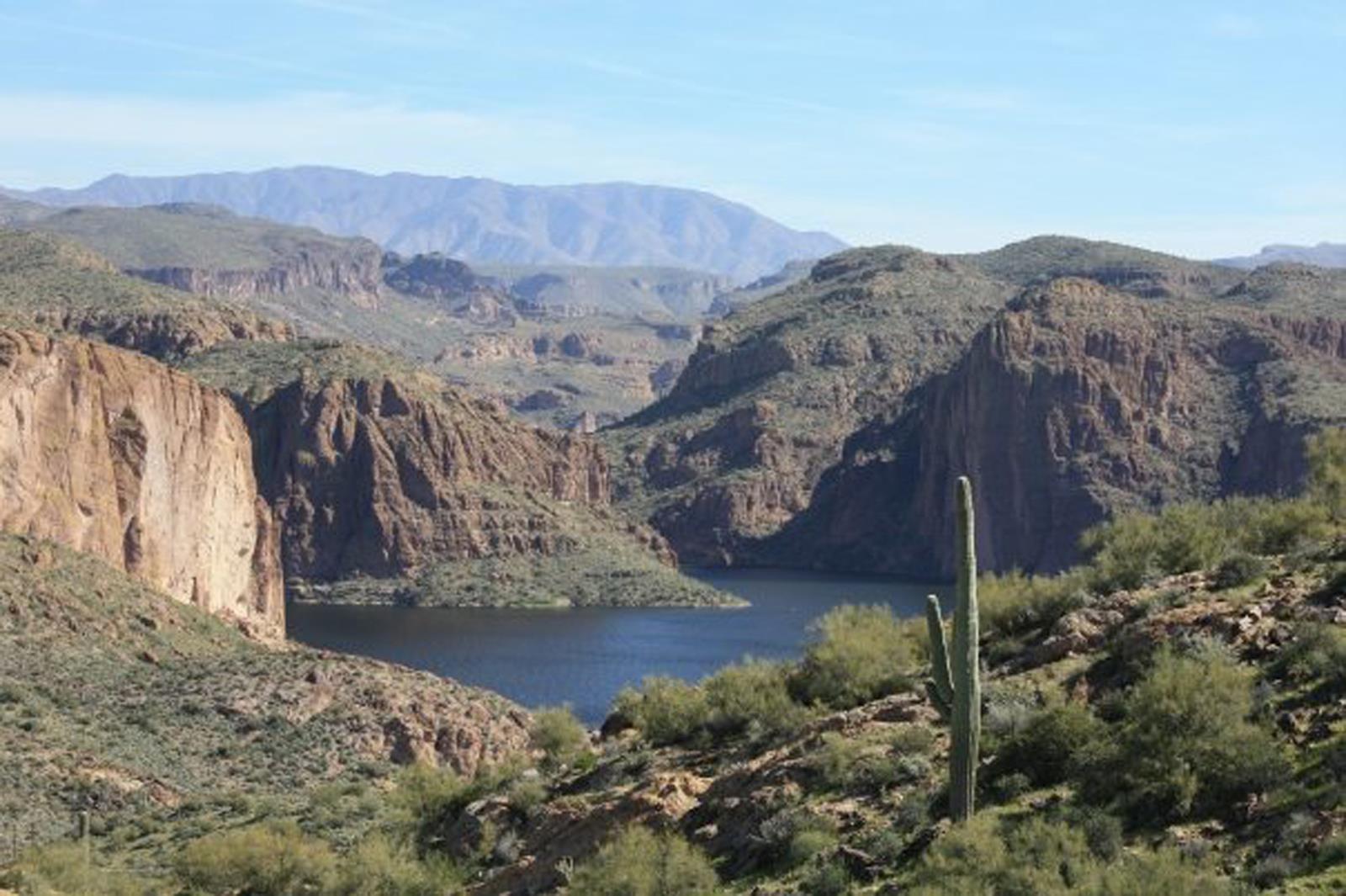 The Apache Trail starts in the town of Apache Junction, just east of Mesa, and snakes through majestic canyons and the wilderness of Tonto National Forest. It includes curve after curve, numerous switchbacks and two one-lane bridges. 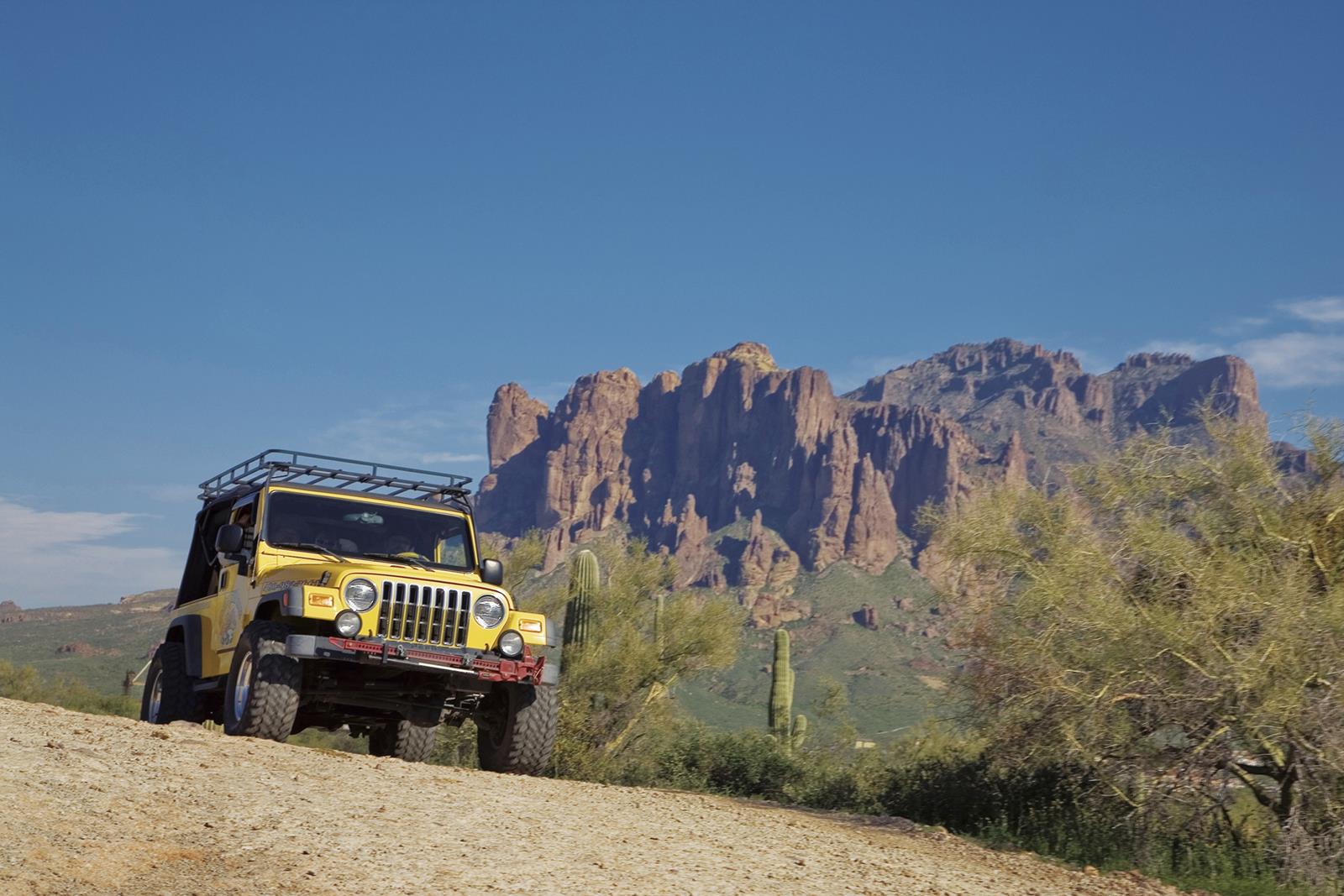 Sometimes traffic slows to 15 or 20 mph, but otherwise the speed limit is 30 or 40 mph. There are steep drop-offs with no rails. The road is paved only to Tortilla Flat (population 6), located 18 miles northeast of Apache Junction, but most day trippers don’t go any farther east.

The first attraction going eastbound is Superstition Mountain Museum, four miles from Apache Junction. Besides a collection of gold mining artifacts connected to the nearby Lost Dutchman Mine, the museum claims two buildings that were relocated from the Apacheland Movie Ranch in Gold Canyon, a full Western set that hosted more than a dozen TV series and nearly 30 films. 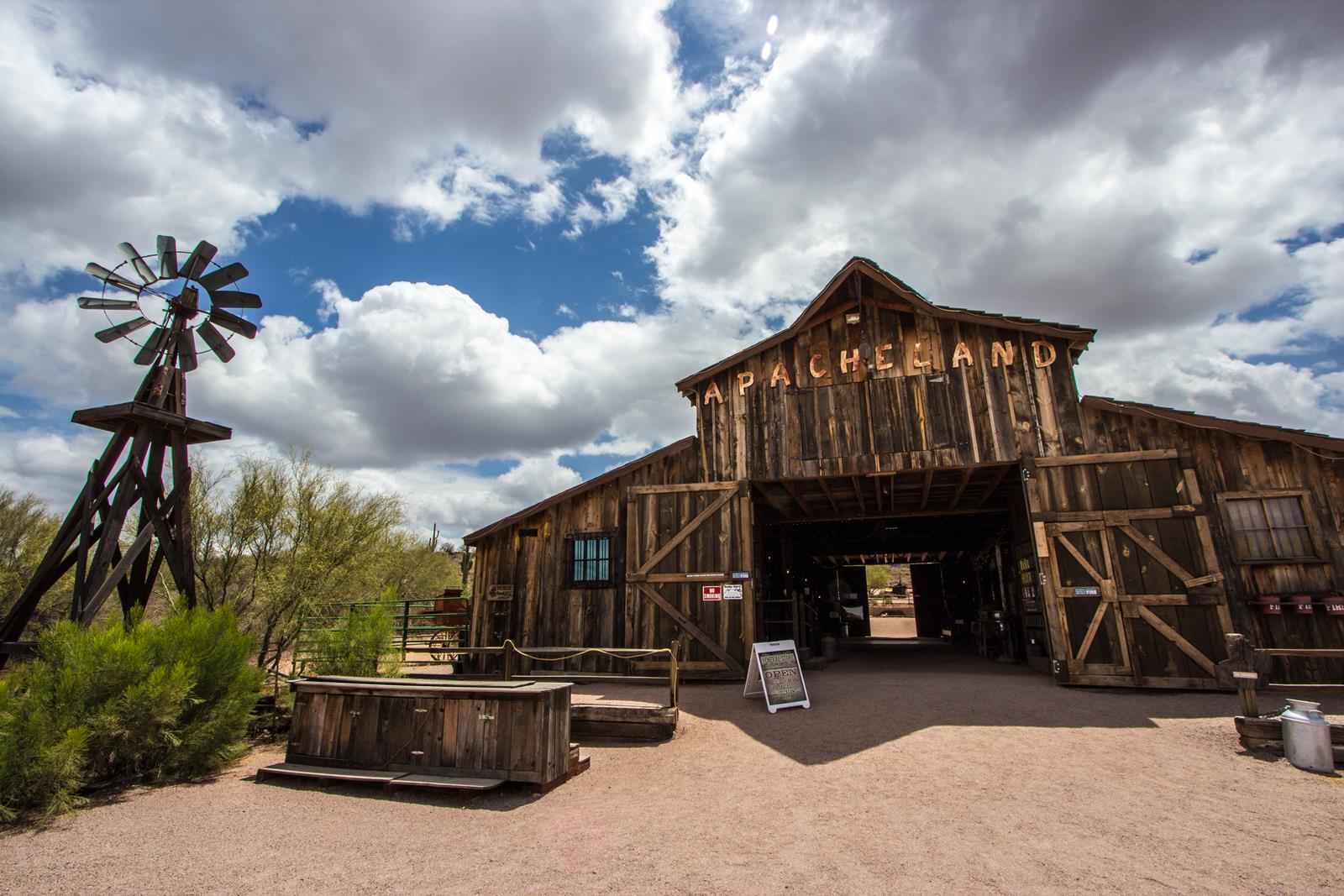 A fire devastated the set in 2004, but the chapel was saved and reassembled at the museum. Called the Elvis Presley Memorial Chapel, it played a prominent role in the 1969 Western Charro! Out of 31 movies Elvis starred in, Charro! is the only one where he did not sing on-screen. His only song played during the opening credits.

Goldfield Ghost Town, a collection of weathered wood buildings on the remains of an old mining community, is a tourist favorite alive with activities and shopping and photo opportunities. Harking back to the 1890s, when this part of the Arizona Territory had more than 50 working gold and silver mines, the picturesque attraction has two museums, a general store, cactus shop, bakery, studio for old-time photos, saloon/steakhouse, live reptile exhibit and narrow-gauge train ride. One building features a bordello tour. Rusted, antique mining equipment scattered across the grounds helps set the stage. 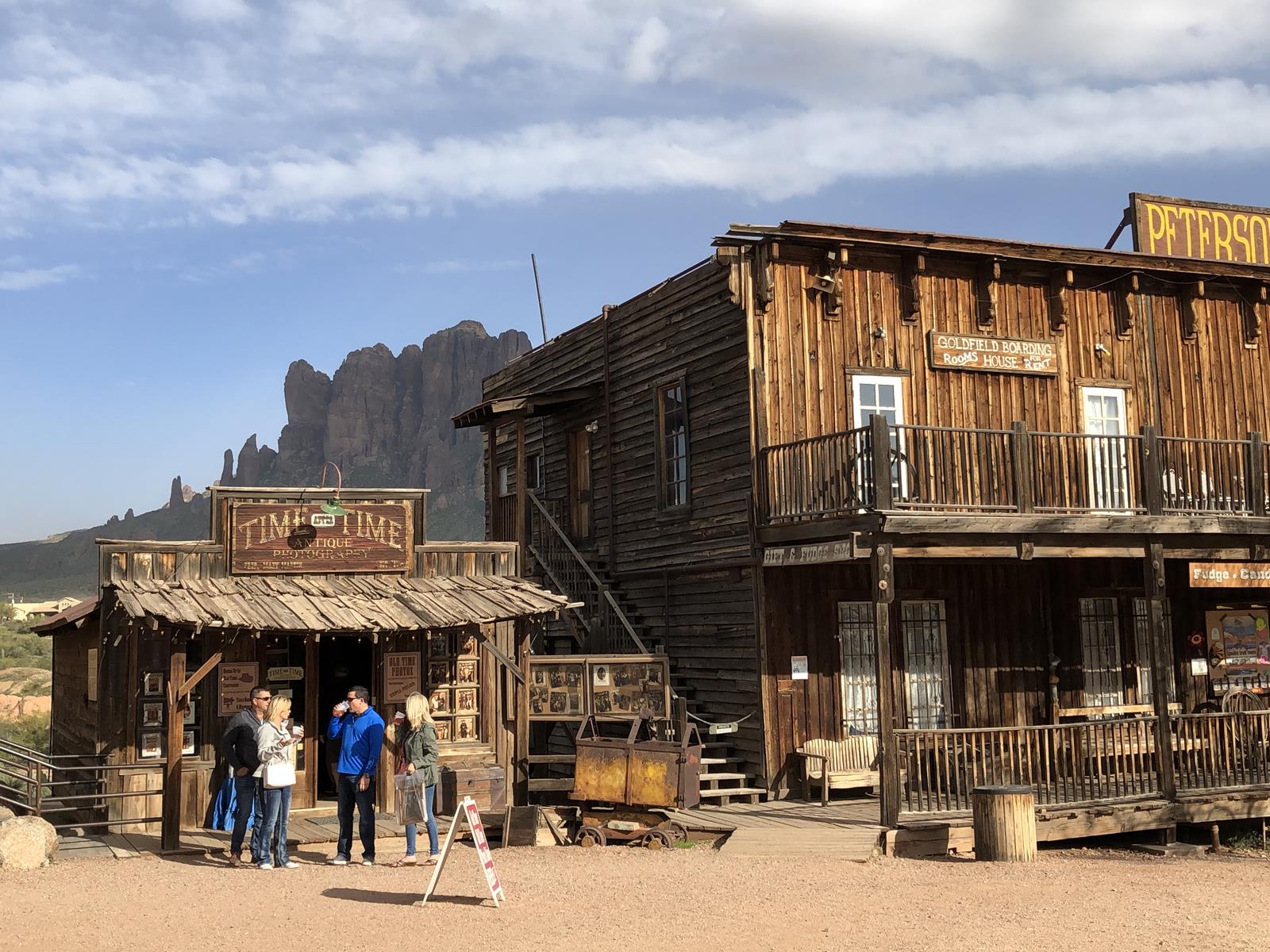 Surrounded by stunning desert views, with the Goldfield Mountains to the west and Superstitions to the east, Goldfield Ghost Town also offers horseback rides, a gold mine tour, gold panning, a zip line and off-road jeep tours through the desert. Mother Lode Mercantile tempts shoppers with prickly pear fudge, among other flavors, and an array of Southwest souvenirs, from rattlesnake stuffed animals to gemstones like agate, amethyst and lapis lazuli. 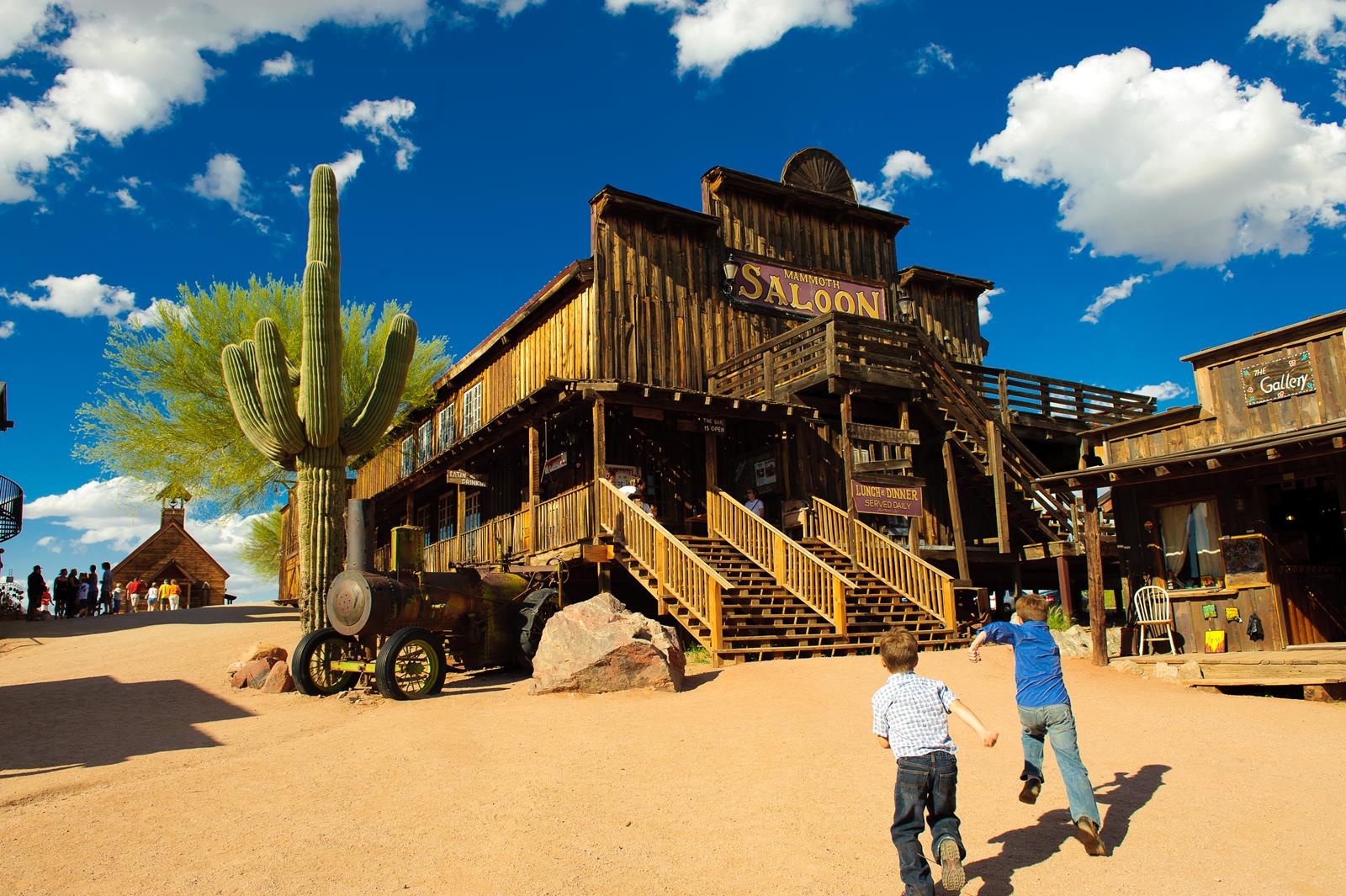 Active travelers can commune with nature on a hike at Lost Dutchman State Park, where several trails lead into the Superstition Wilderness and surrounding Tonto National Forest. The quarter-mile Native Plant Trail hosts an abundance of desert vegetation.

On Canyon Lake, one of four lakes created in 1925 when the Salt River was dammed, Dolly Steamboat offers 90-minute cruises on Canyon Lake. The paddlewheeler, popular with tour groups, plies secluded inner waterways bordered by sand- and rust-colored cliffs where bighorn sheep are often seen. 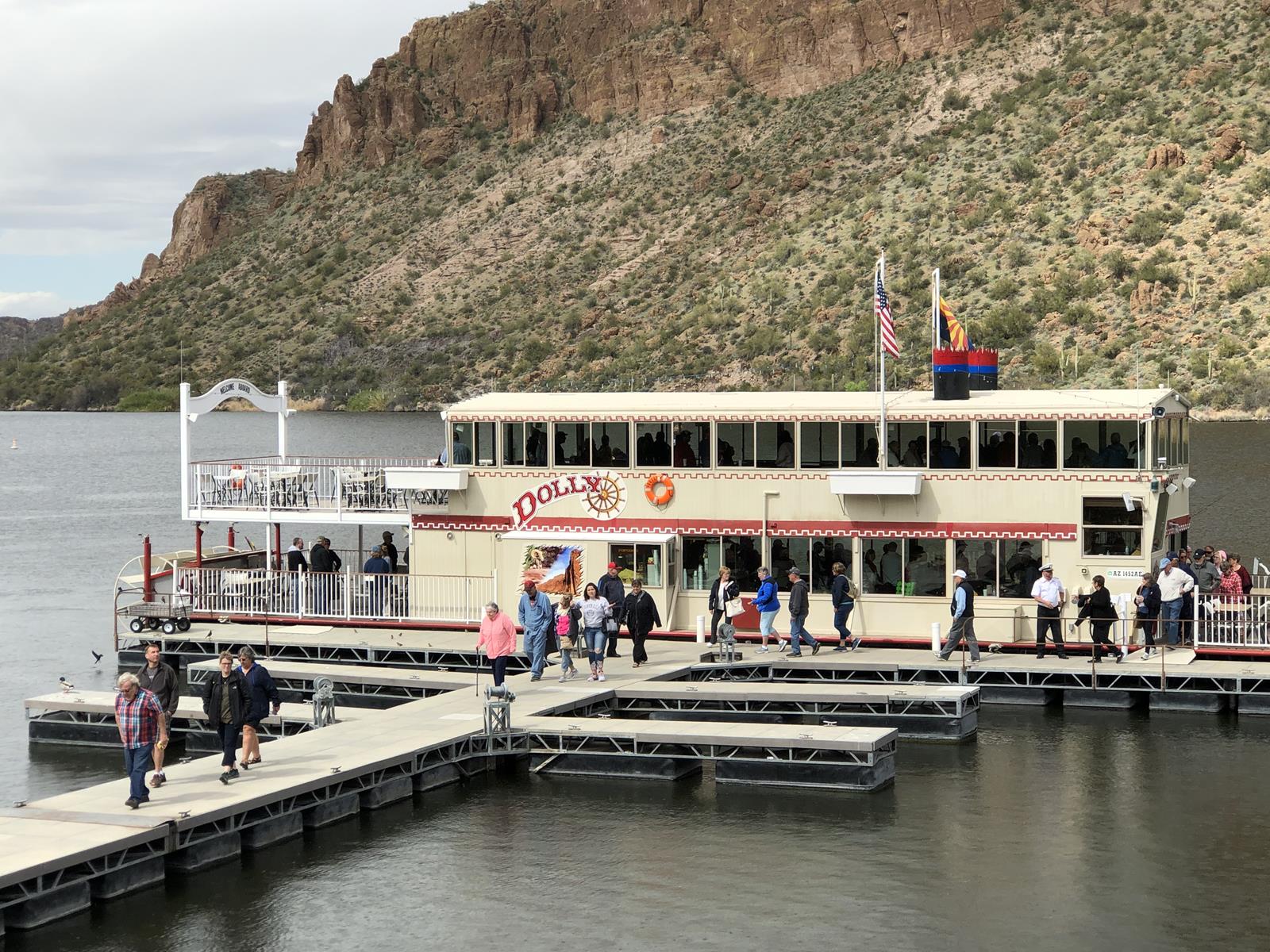 Binoculars are available for spotting the wildlife, which might include bald eagles, hawks, peregrine falcons, javelina and white-tailed deer. Narration features commentary on the cactus, mesquite and other plants as well as wildlife and geology. There’s a snack bar on the boat’s enclosed main level. Photographers spend most of their time on deck upstairs. Dolly Steamboat also offers 2½-hour buffet dinner cruises.

Tortilla Flat, located two miles east of Canyon Lake, is not actually a town but an Old West-style commercial complex with a gift shop, ice cream/candy store (with prickly pear gelato), museum and Superstition Restaurant & Saloon, which is known for its burgers, chili and Mexican fare. Decor includes saddle bar stools and walls papered with dollar bills and money from around the world. A tourist hotspot, Tortilla Flat is billed as the “last surviving stagecoach stop on the Apache Trail.” 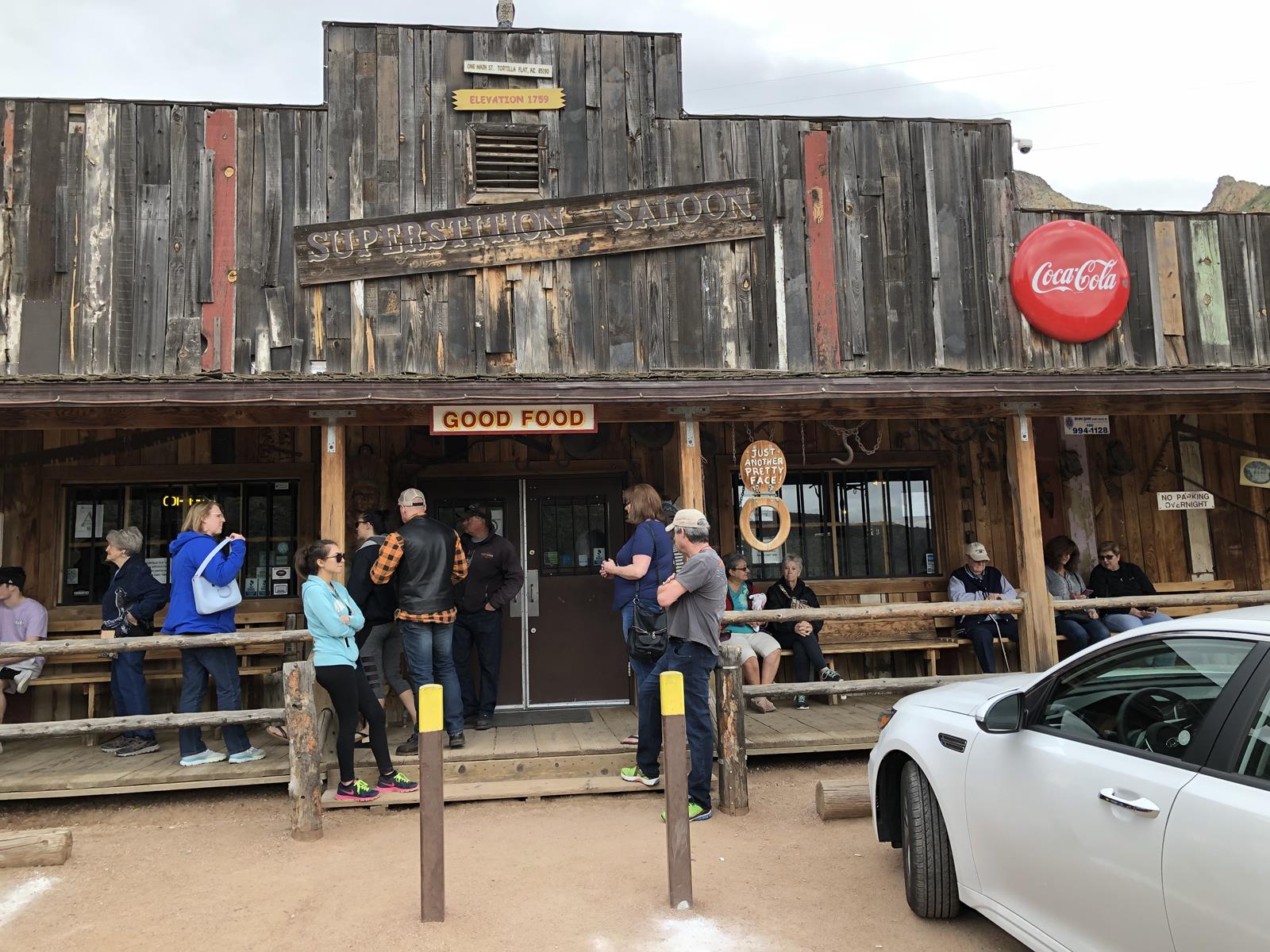 Groups can cap their Apache Trail adventure with a meal and musical entertainment at Barleens Dinner Show in Apache Junction.

For more information on Mesa and the Apache Trail, contact visitmesa.com and apachetrailattractions.com.