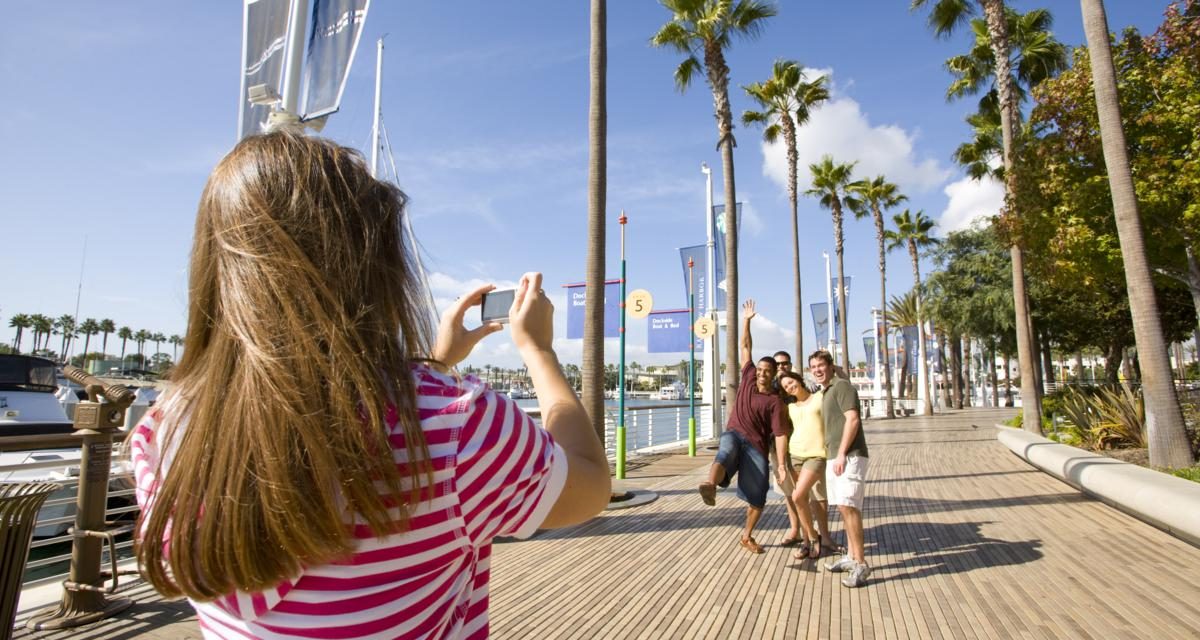 Even though I knew the classic luxury liner was moored permanently, the first time I lay in bed in the Queen Mary Hotel I almost expected to be lulled to sleep by the ocean waves. The portholes, overlooking downtown Long Beach across the bay, certainly had me daydreaming about transatlantic crossings of long ago.

The graciously restored Queen Mary, a grand lady built for Cunard Line in the 1930s, catches the eye of every passenger who boards a Carnival Cruise Line ship at the white-domed Long Beach Cruise Terminal, located steps from the hotel’s parking lot. Clearly a blast from the past, she toots her whistle four times a day to let everyone know she still has life—as one of Long Beach’s prime tourist attractions. A few hundred yards off her stern, contrasting sharply with the trappings of this stately maritime antique, loom the blue and yellow chutes of the waterpark plopped atop a mass-market Carnival cruise ship built 60 years later.

While the opportunity to overnight on the Queen Mary—and explore her nooks and crannies during the day—was the highlight of my three-night Long Beach stay, the historic ship was just one of many pleasures I experienced in California’s seventh-largest city (pop, 470,000) before boarding the Carnival Imagination for Catalina Island and Ensenada, Mexico.

Bordered by the Pacific Ocean and miles of sandy beaches, Long Beach blends the sophistication and amenities of a big city with the relaxed atmosphere of a seaside resort. Boasting 345 days of sunshine, it mirrors the best of Southern California. Winding along the water is a 5½-mile path for biking, roller blading, jogging and strolling. 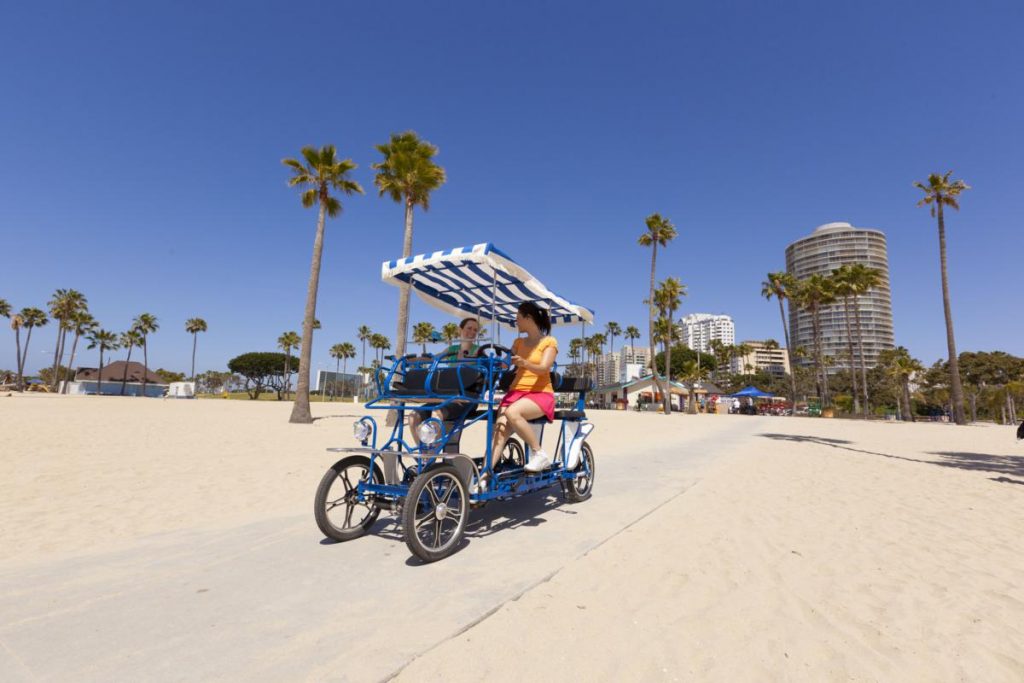 Winding along the Long Beach waterfront is a 5½-mile path for biking, jogging and strolling. (Long Beach CVB Photo)

The sparkling downtown waterfront, its palm-lined, park-like Esplanade hugging Rainbow Harbor, abounds with fun shops, vendor kiosks and restaurants; some 120 eateries lie within an eight-block radius. In recent years more than $1 billion has been invested in the waterfront, and more and more people are choosing to live downtown, which is compact and very walkable. 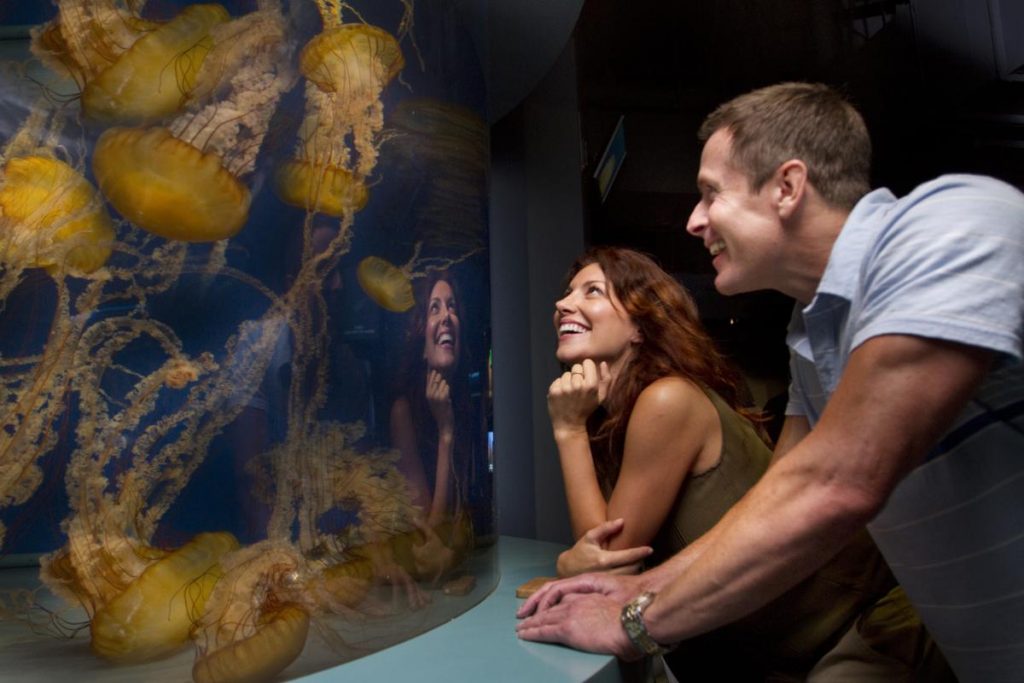 Rainbow Harbor’s premier attraction is the indoor/outdoor Aquarium of the Pacific, the nation’s fourth-best-attended aquarium. At the 350,000-gallon Tropical Reef, the largest exhibit, divers speak to onlookers through underwater microphones, describing the habits of sharks, fish, turtles and other creatures swimming around them. The June Keyes Penguin Habitat features Magellanic penguins native to South America. Sea otter and seal/sea lion shows are held throughout the day. In the Lorikeet Forest aviary, visitors can buy cups of nectar to feed the colorful little parrots from Australia that alight upon their arms and shoulders. Aquarium of the Pacific is undergoing an expansion that will bring an immersive theater and new exhibits in 2019.

A short walk from the aquarium is the dock for Harbor Breeze Cruises, where I joined a 45-minute trip out into Queensway Bay. Providing a great overview of the city, it got us close to the Queen Mary, sea lions basking on red buoys and giant gantry cranes loading and unloading freighters at the container port. Also available from Rainbow Harbor are whale-watching cruises and high-speed catamaran service to Catalina Island, an hour away. 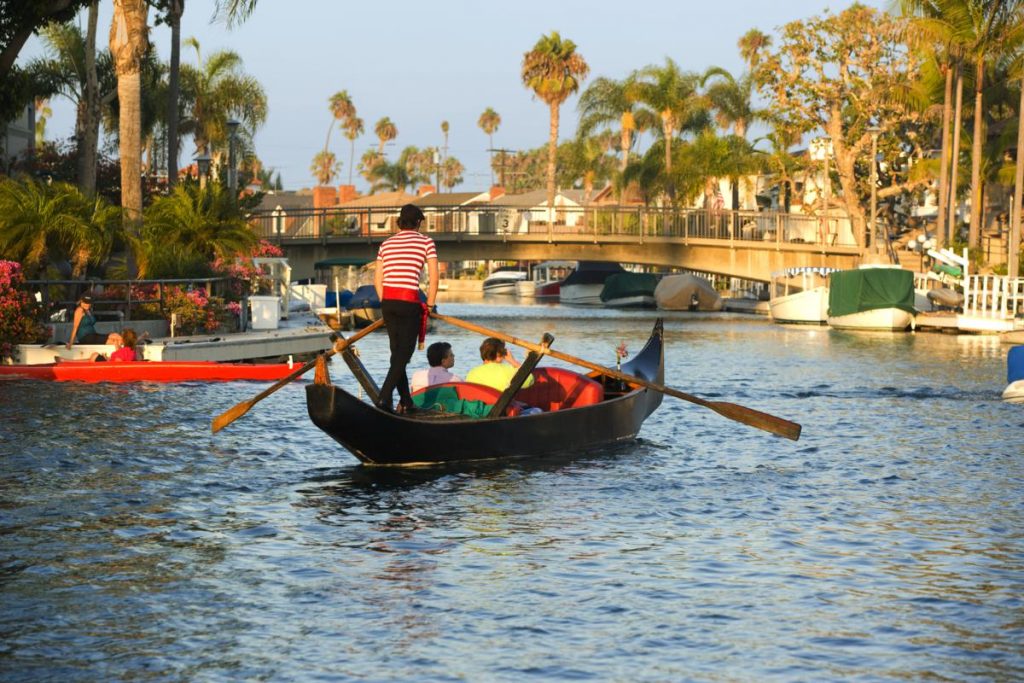 For a romantic water adventure, head to Naples Island for a Gondola Getaway ride on the charming canals tucked into the southeast corner of Long Beach. Your costumed gondolier may croon an Italian love song while paused under one of the low arched bridges. The exclusive Naples neighborhood, its palms soaring above 100-year-old buildings, has many intriguing shops and restaurants.

The Pike Outlets, between the Long Beach Convention Center and Aquarium of the Pacific, offers nationally known stores like The Gap, Forever 21 and Nike, plus restaurants such as Bubba Gump Shrimp Co., Famous Dave’s BBQ and P.F. Chang’s China Bistro. An entertainment hub, The Pike Outlets includes Laugh Factory comedy club, a Cinemark multiplex, and a carousel and Ferris wheel that hark back to the site’s Coney Island-style amusement zone, called The Pike.

For downtown shopping, though, I favor Shoreline Village, a collection of specialty shops at the east end of Rainbow Harbor. Reminiscent of a turn-of-the-20th century coastal town, the brightly painted frame buildings sport cupolas, dormers, gingerbread trim and other Victorian flourishes. The Village Hat Shop boasts the largest selection of hats on the West Coast—derbies, top hats, Western hats, Panama hats, berets, baseball caps and, for the ladies, that perfect headpiece for the Kentucky Derby or Royal Ascot races. Restaurants at Shoreline Village range from Louisiana Charlie’s (Cajun, BBQ) to Parker’s Lighthouse for seafood. Shenanigan’s is an Irish pub with live music.

The Royal Mail Ship Queen Mary, which made her maiden voyage from Southampton, England, to New York in 1936, reigned as one of the fastest, largest and most elegant ships during the heyday of trans-Atlantic travel. In the 1940s and ’50s, her first-class quarters bristled with movie stars, kings and queens, diplomats and dignitaries, business tycoons and members of high society. Her final journey, from Southampton and around the tip of South America, brought her in 1967 to Long Beach, where she has been stationary ever since. The retired ship is owned by the City of Long Beach and managed by Evolution Hospitality. 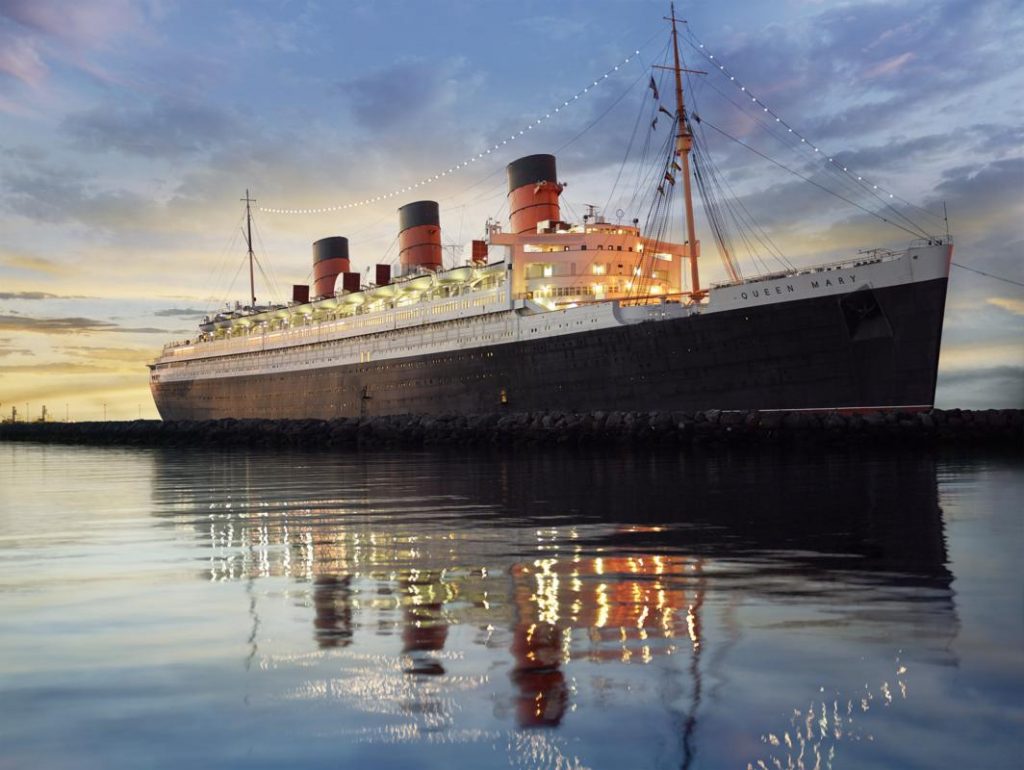 The Queen Mary provides a field day for ship buffs, history lovers, royal watchers, Anglophiles, Art Deco fans, celebrity hounds—and anyone looking to escape to a more genteel era. I fall into all those categories, so I was in heaven, spending hours poking around on my own before and after a guided tour.

An impression of the Queen Mary that lingers with me is the polished wood paneling—22 acres of it—that covers corridors, stairwells, staterooms and public rooms. Designers used 56 kinds of wood veneers, from mahogany, cedar, ebony and African cherry to multiple varieties of maple and oak.

The Queen Mary’s “Glory Days Historical Tour” hits the high points in one hour, but visitors (hotel guests and others) also are free to wander at whim, stopping to examine exhibits, watch videos, read panels of text, admire the best of British decorative arts, and peruse enlarged black-and-white photos of famous passengers. Among the luminaries were Bob Hope (who entertained in the First Class Lounge), Fred Astaire, Elizabeth Taylor, Audrey Hepburn, Walt Disney, Liberace, and the Duke and Duchess of Windsor. There are restaurants open to the public and benches on deck for soaking it all in. 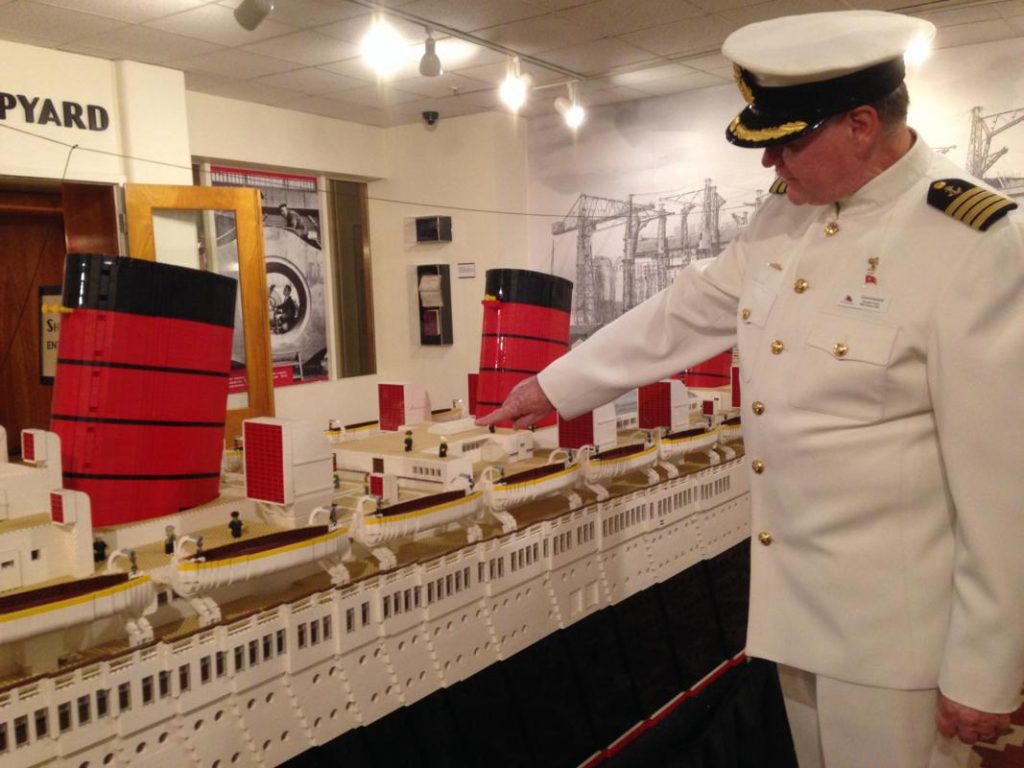 Commodore Everette Hoard of the Queen Mary with a model made from 250,000 LEGO bricks. (Randy Mink Photo)

In July 1943, sailing from New York to Scotland, the vessel carried 16,683 American soldiers and personnel—the most people onboard a ship in recorded history—to build up for the invasion of Normandy. Bunk beds were stacked to the ceilings in formerly elegant rooms, but post-war the grande dame of the seas was returned to her former glory.

Winston Churchill, prime minister of Great Britain, and his wife Clementine made six trips on the Queen Mary, three during the war and three after. It was in a conference in the First Class Drawing Room that he finalized plans for the Normandy landing. Pictures of Churchill in the hotel lobby are next to the only two original elevators in working condition. The current exhibition Their Finest Hours: Winston Churchill and the Queen Mary includes a production set and a trailer from the recent film Darkest Hour starring Gary Oldham as the British statesman. 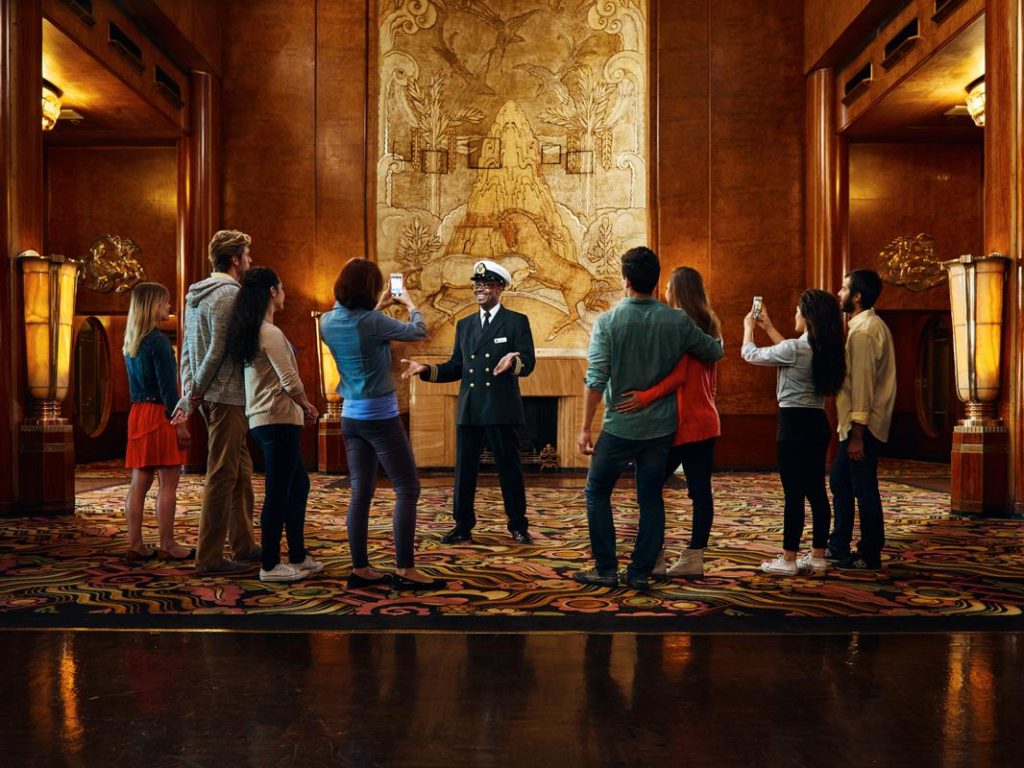 A guided tour of the Queen Mary shows off the grand, wood-paneled salons of the classic ocean liner. (Queen Mary Photo)

On the Promenade Deck, the former First Class Dining Room, now called the Grand Salon, hosts the lavish Sunday Champagne Brunch. Under a three-deck-high ceiling in a room as wide as the ship, countless food stations offer everything from crab legs and sushi to carved prime rib, turkey and Texas beef brisket. There are stations for Chinese, Mexican and Italian food. The dessert table is laden with lemon and pecan-pie bars, mini red velvet and carrot cakes, and white chocolate bread pudding with vanilla sauce. Art Deco glasswork and other original art transport diners to a gracious time that will never be duplicated. An inlaid-wood map of the North Atlantic, which showed an electrically lit crystal model of the Queen Mary moving between the New and Old worlds, flanks one end of the room. 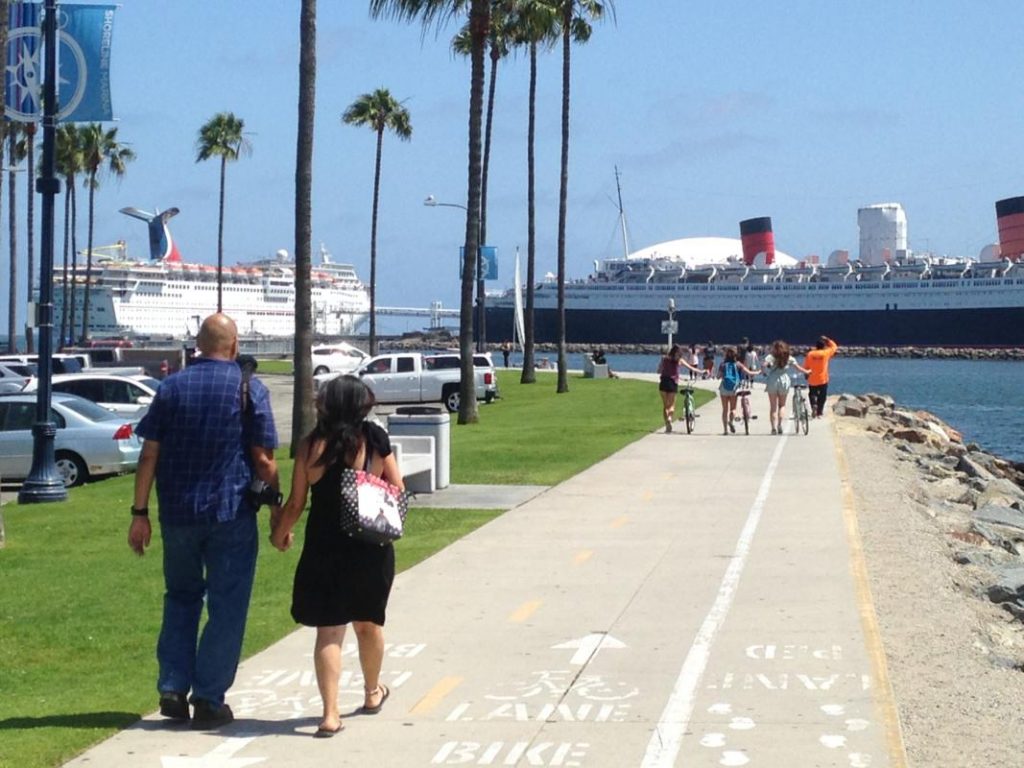 Carnival cruise ships and the Queen Mary are visible from the waterfront path in downtown Long Beach. (Randy Mink Photo)

Tucked away on Promenade Deck, near the gift shops, was one of my best discoveries—a room with 13 chairs for viewing a series of videos called Queen Mary Voices. The documentary clips include interviews with a former cabin steward, a Jew who escaped Nazi Germany and a U.S soldier who sailed to New York just after World War II ended. An 18-year-old woman from Wales (now living in Anderson, Indiana) describes what it was like traveling to the U.S. as part of the first shipload of war brides in February 1946. At age 16, she had married an American GI in England and was crossing to reunite with him.

The war bride saga also surfaces in The Queen Mary Story documentary shown in the ship’s 4-D theater, a fun space equipped with water jets, an air blaster, vibrating seats and 3-D movie technology. The movie shows the ship under construction in Scotland and the 1934 launching and naming ceremony attended by King George V and Queen Mary. 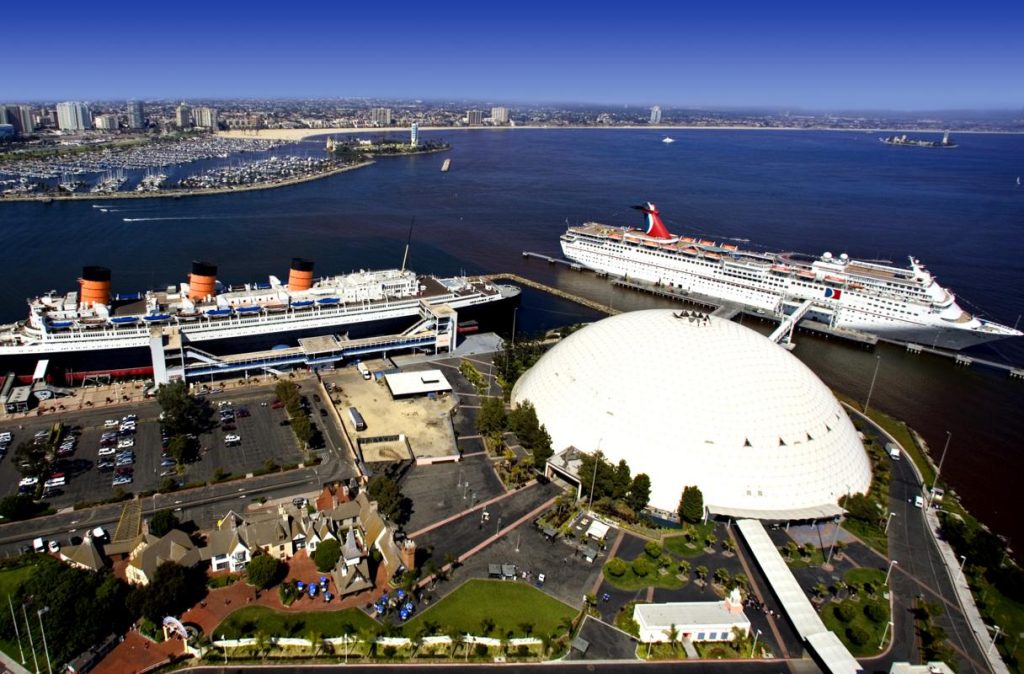 Those lucky enough to stay overnight in one of the hotel’s 300-plus guest rooms, all former first-class cabins with original wood paneling and cabinetry, can really immerse themselves in the past. Protruding from the wall in my spacious Deluxe Harborview King was a fan with brass sign reading: “Original Ship’s Fan – Non-Operable.” The gas-fired heater is still in place, but rooms now have central heat and air-conditioning. Also original are the bathroom’s shower curtain bar, white tiling with black accents, and four inoperable bathtub knobs marked “Cold Fresh,” “Hot Fresh,” “Hot Salt” and “Cold Salt.” Otherwise, rooms are appointed with amenities the 21st-century traveler would expect to find in any modern hotel, flat-screen TV included.