When I told someone I was going to the Herbert Hoover museum in Eastern Iowa, she said, “Oh, yeah, it seems like he was the FBI director forever.”

I had to tell her, “No, I’m talking about Herbert Hoover, the president. Not J. Edgar Hoover.” 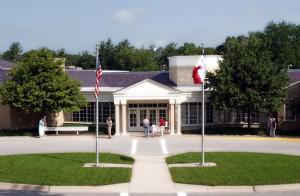 Our nation’s 31st president has been forgotten by many, but the Herbert Hoover Presidential Library and Museum in West Branch, Iowa preserves the legacy of the orphan boy who lived the American dream. From humble beginnings in a Quaker family in this Midwestern farming town, the son of Jesse and Hulda Hoover went on to become a multi-millionaire mining engineer, a world-renowned humanitarian, America’s president from 1929-1933 and a respected elder statesman for decades after his term in office. It’s a story of tragedy and triumph.

Soon after the Republican nominee was elected in a landslide, the stock market crashed and the Great Depression followed, plunging Hoover’s presidency into trouble and subjecting him to derision. He was defeated for re-election in 1932 by Franklin D. Roosevelt. But his stature grew over the years and when Hoover died at the age of 90 in 1964, his reputation had rebounded.

The library and museum is located within Herbert Hoover National Historic Site, a 187-acre park administered by the National Park Service. Bordering downtown West Branch, this peaceful landmark preserves the natural world of Hoover’s youth and the Quaker community where his values were formed.

A walking tour through the site reveals several buildings from his youth. The tiny Birthplace Cottage is where the future president was born in 1874. It had several owners until it was purchased by President and Mrs. Hoover in 1935 and restored. To Hoover the cottage was “physical proof of the unbounded opportunity of American life.” 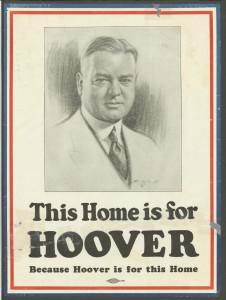 Also on the grounds are a blacksmith shop similar to the one operated by Hoover’s father from 1871-79; the schoolhouse where he was educated (moved two blocks from its original site); and the Quaker meetinghouse where young Bert worshiped. Visitors can walk along three trails on the tall-grass prairie where he played and see the hillside graves of the president and his wife, Lou Henry Hoover. A 10-minute movie on his boyhood is shown at the National Park Service Visitor Center.

Hoover’s father died of a heart attack when the boy was just six years old; his mother died of typhoid fever four years later. At age 11 Herbert was sent to live his uncle in Oregon. In 1891 he entered the first class at Stanford University in Palo Alto, Calif. and earned a degree in geology. He first worked in the California gold mines, then went to Australia as a mining engineer. After marrying Lou Henry in 1899 (she was the first woman to receive a geology degree from Stanford), they went to work in China and traveled the globe for a mining consulting company. Hoover set up his own London-based engineering consulting firm in 1908.

The Hoover Library and Museum, dedicated in 1962 by former presidents Hoover and Truman, shows a 22-minute biographical film hosted by Hoover’s great-great granddaughter, Margaret Hoover. Gallery exhibits depict not only Hoover’s political career as president and influential commerce secretary under Presidents Harding and Coolidge, but also his work in spearheading relief programs to feed Europeans over the course of two world wars.

The Humanitarian Gallery features a Belgian Relief warehouse and a selection of the famous embroidered flour sacks sent to Hoover by grateful recipients of American assistance. Many Europeans during World War I subsisted on a “Hoover lunch”—white bread and vegetable soup. In the words of one Latvian child, “Whenever anyone mentions Hoover, I think of white bread.” A video theater presents emotional stories from World War I and II survivors. Hoover also played a major role in the founding of the children’s welfare organizations CARE and UNICEF.

These efforts to feed the world and help the poor reflected Hoover’s life-long belief in service to others, a key tenet of his Quaker upbringing. His reputation as the “Great Humanitarian” conflicts with his rather cold public image, an image that did not play well with Americans suffering during the Depression. (Besides John F. Kennedy, Hoover was the only president to give away his presidential salary.)

Visitors to the museum can also stand at the inaugural podium, view a film clip of his speech and see a multi-screen video snapshot of America before Wall Street crashed. They also learn about the construction and 1931 dedication of Hoover Dam, a personal dream of the engineer-president.

Other exhibits show Hoover’s love of fishing and a reproduction of the suite in New York’s Waldorf Towers where he lived from 1940 until his death. Playing on the suite’s original color TV is a question-and-answer interview filmed in his later years.

The temporary exhibit “School House to White House” (through Oct. 30) displays artifacts, photos and films that reveal fascinating details about children that would grow up to be presidents. Exhibits show future U.S. presidents as young sports stars, choir members and musicians, and how they were educated in one-room school houses and large public schools or by private tutors. Materials are drawn from the 12 presidential libraries administered by the National Archives and Records Administration.

For information on the Herbert Hoover Presidential Library and Museum, call 319-643-5301 or log on to www.hoover.archives.gov.

For information on Herbert Hoover National Historic Site, call 319-643-2541 or log on to www.nps.gov/heho.