Iowa Attraction on I-80 Spotlights the World of Trucks 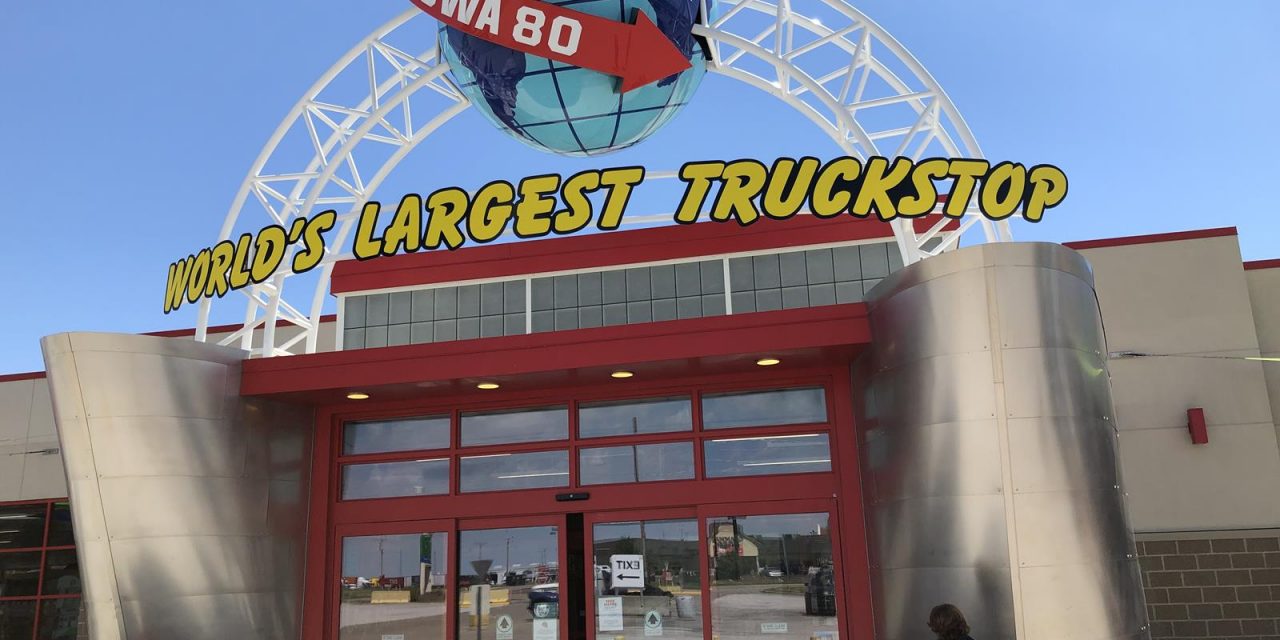 Anyone who travels our nation’s highways and byways knows that trucks are as much a part of the American landscape as forests, fields, rivers and mountains. 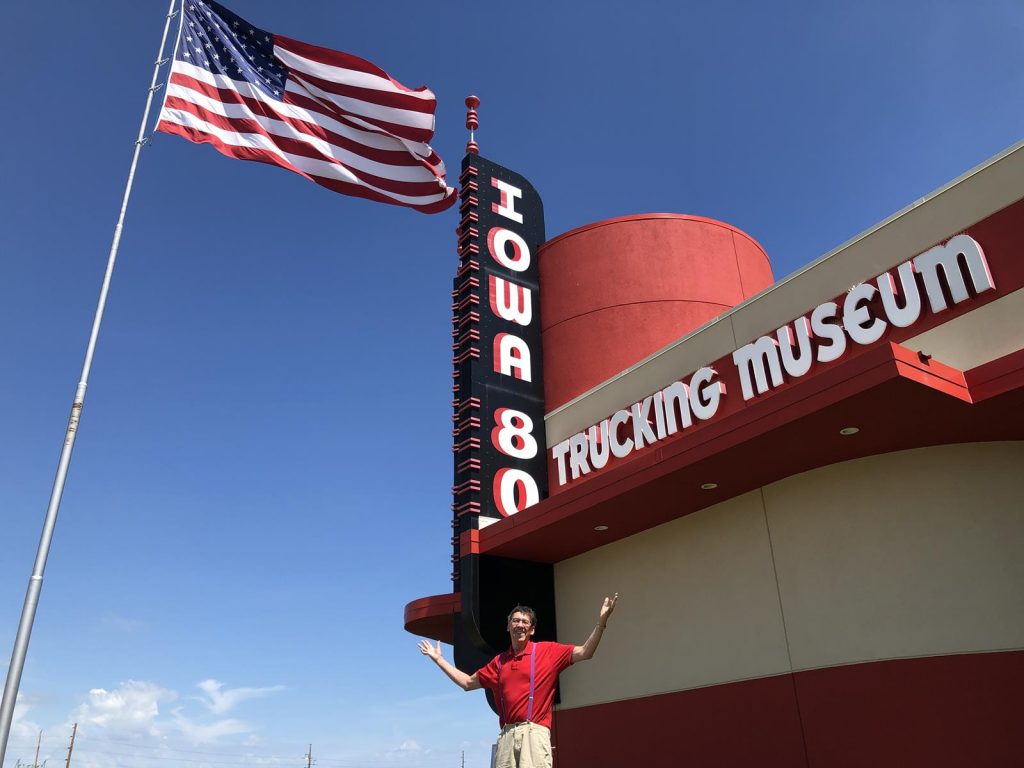 The Iowa 80 Trucking Museum educates and entertains travelers at the World’s Largest Truckstop in Walcott, Iowa, not far from the Quad Cities. A new addition to the museum is under construction. (Jeremy Mink Photo)

I fondly remember riding with my brothers in the back of my dad’s poultry feed truck as we made deliveries to farms in northeastern Illinois—farms that have long since become subdivisions. We boys played with toy trucks and were especially fascinated by dump trucks and garbage trucks.

Even those who have never given much thought to trucks will find vehicles of interest at the Iowa 80 Trucking Museum. A treasure house that chronicles the evolution of 20th century transportation, it displays more than 100 vintage trucks—manufactured from 1903 to the 1970s—in a huge exhibition hall at the sprawling Iowa 80 Truckstop in Walcott, just west of Davenport and the Mississippi River. Many are rare, one-of-a-kind vehicles, and each has its own story to tell, a story concisely told on easy-to-read signs.

As at antique auto museums showcasing meticulously restored cars that shine brighter than they ever did in their day, the trucks are spit-polish clean. In fact, the whole truck stop gleams. Hardly a dingy roadside eyesore, the Iowa 80 complex—billed as the “World’s Largest Truckstop”—is tourist-friendly and welcomes all to its shops, restaurants and selfie spots.

The museum, a paradise for nostalgia buffs, was the dream of Bill Moon (1932-1992), who founded Iowa 80 Truckstop in 1964. His sons and grandsons carry on the family business.

A collector of antique trucks and trucking memorabilia, Moon was a pioneer leader in the American Trucking Historical Society.

“He loved everything about trucks and trucking pretty much his whole life,” says Heather DeBaillie, vice president of marketing of Iowa 80 Group Inc. “When he started seeing old trucks in scrapyards or they were being crushed or just being left to rot out in a field somewhere, he started thinking, ‘This is really a shame, this is our history, this is the history of how we have evolved as a country—the interstate system and how trucks have changed, being able to get goods to people—and we’re not saving that.’”

“So he decided that he wanted to save all of these old trucks that he found and did just that,” DeBaillie continues. “He just started buying them, collecting them and filling sheds with them, so eventually it became his passion to be able to share them with the general public because he didn’t believe most people knew that much about trucks or trucking.”

While Moon didn’t live to see the opening of the museum, his family made his dream a reality. Since its debut in 2008, the attraction has been expanded twice, and a 32,000-square-foot addition with room for another 35 to 40 trucks—now in sheds in various stages of repair—will be completed in December 2021. (It takes about two years to restore a truck.)

Start in the Lobby with Exhibits and Films

On display in the lobby is a 1903 Eldridge, the oldest American-made truck known to exist. It was built in Des Moines by George Eldridge, a machinist who used it to transport goods between his various machine shops. He also made at least one car and three other trucks. Nearby, a “Happy 100th Birthday” sign draws attention to a 1921 International Harvester Model 101, which was manufactured between 1921 and 1923. It’s believed to be the only one left. Nostalgia seekers also will enjoy the antique gas pumps and metal signs advertising brands of gas and motor oil, both in in the lobby and throughout the museum. Memorabilia includes oil cans, toy trucks and scale models as well. 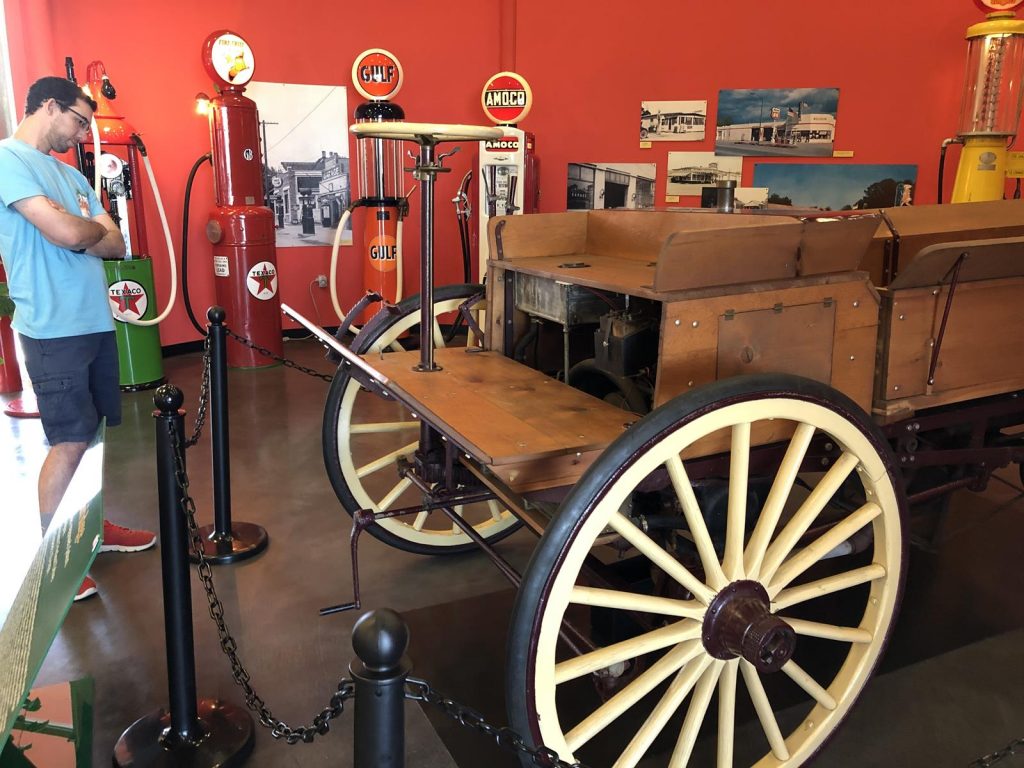 The 1903 Eldridge, on display in the lobby, is the oldest American-made truck known to exist. (Randy Mink Photo)

A timeline exhibit in the lobby paints a picture of motor transportation in America. You learn, for example, that in 1925 more than 300 brands of trucks were on the road; they bought their gas from barrels at grocery and hardware stores before the landscape was dotted with gas stations—more than 200,000 by 1935. Gas stations were the first commercial buildings to be set back from the street, as the design accommodated cars without disrupting traffic. Also enlightening is the adjacent list of trucking vocabulary terms.

Below the timeline are posted some fun facts in quiz form. One example: “You’re driving your big rig down the road when you hear someone say on the CB, ‘There’s an alligator on the road.’ What do they mean?” Answer: “It’s a large piece of tire tread from a blown tire.”

Or how about this question: “What is the longest interstate highway in the U.S.?” Answer: “Interstate 90, nearly 3,100 miles long, Seattle to Boston.” (Second longest is I-80, which runs 2,909 miles from San Francisco to Teaneck, New Jersey.)

Off the lobby, a theater shows short films on trucking. I enjoyed watching interviews with people who drive long distances for a living. The clips really put a human face on the men and women behind the wheels. A mural outside the theater honors four pioneer women drivers.

Inside the exhibition hall, lovingly refurbished trucks from yesteryear beg to be photographed. The variety of vehicles is staggering, and everyone will find his or her favorite.

Fans of the rock band REO Speedwagon are attracted to the 1929 REO Speedwagon EX. As the sign in front of the red Skelly gas truck explains, Ransom Eli Olds founded REO Motor Co. after leaving his Olds Motor Works Co. (maker of Oldsmobile cars) in 1904. When he left Olds, he was precluded from using his last name for another auto company, so he chose his initials. REO produced trucks from 1904-1967. 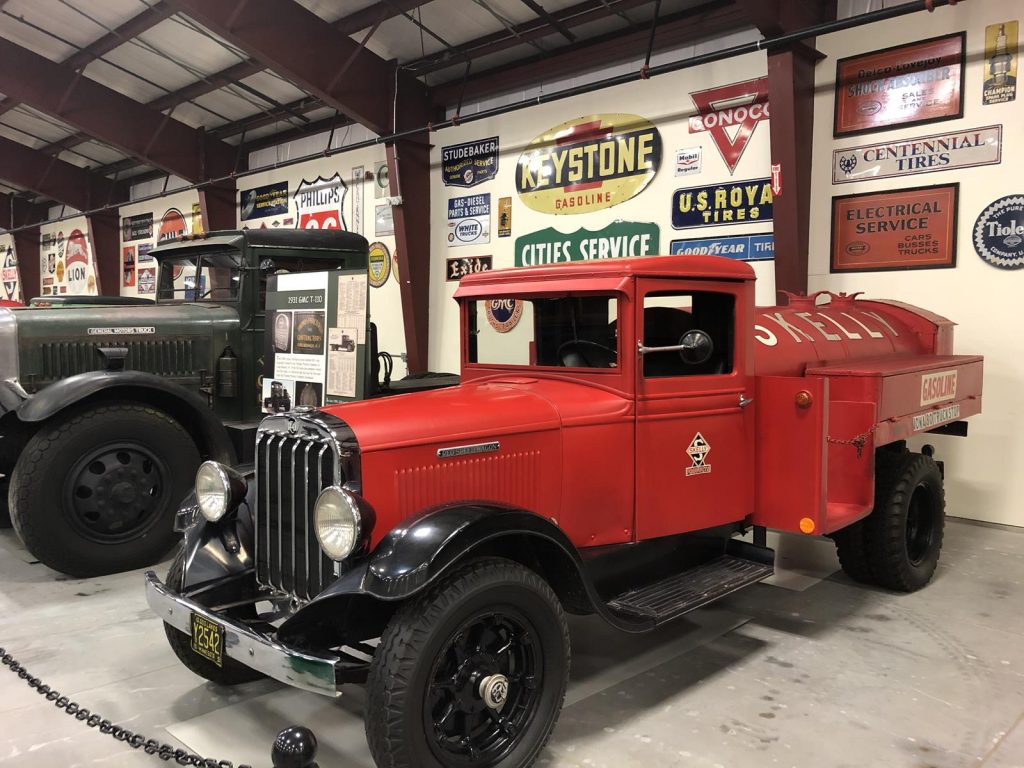 Then there’s the 1939 International D-15 Armored Truck that was purchased by the Minneapolis Police Department during the gangster era. Its quarter-inch-thick steel armored body boasts two-inch-thick bullet-proof windows with gun ports. Steel plates mounted on the front bumper are bullet deflectors for the front tires. 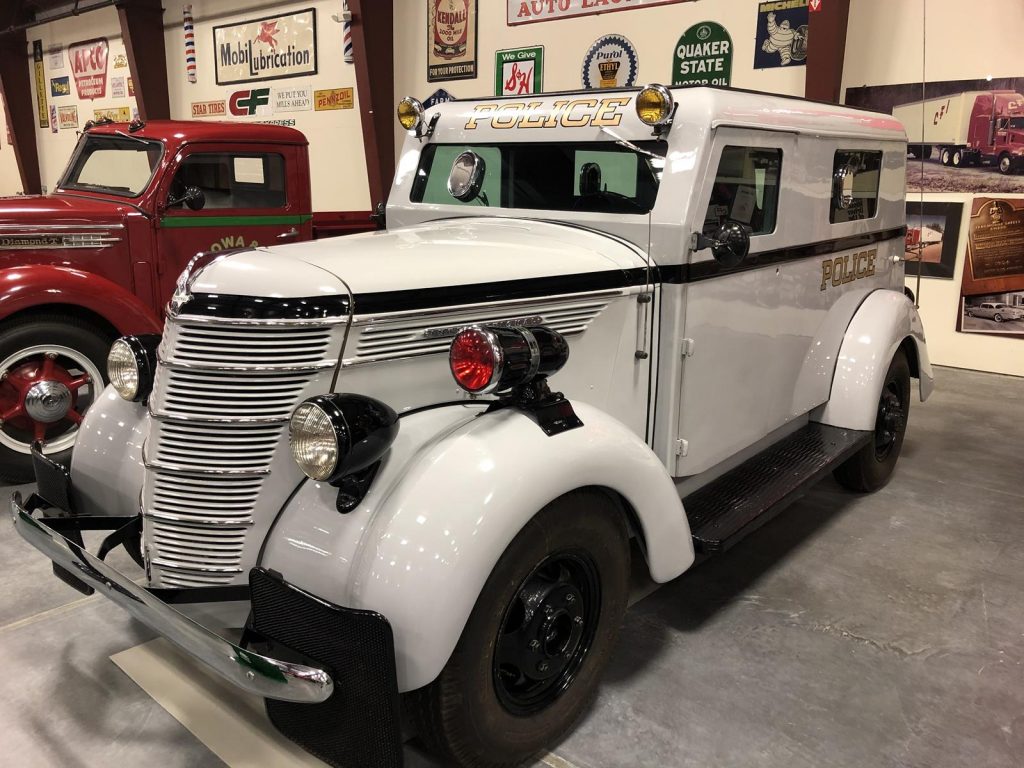 The 1933 Ford Model A Paddy Wagon on display was transformed into a Cleveland Police truck for the 1978 movie F.I.S.T. Filmed in Dubuque, Iowa, it starred Sylvester Stallone, who played a character who got arrested and was thrown into the back of the paddy wagon. (Ford Motor Co. today has a whole division devoted to police vehicles.) Also from the movies is the museum’s 1924 White Wrecker Model 40, which was used to pull a car from the lake in the 1991 movie Fried Green Tomatoes. 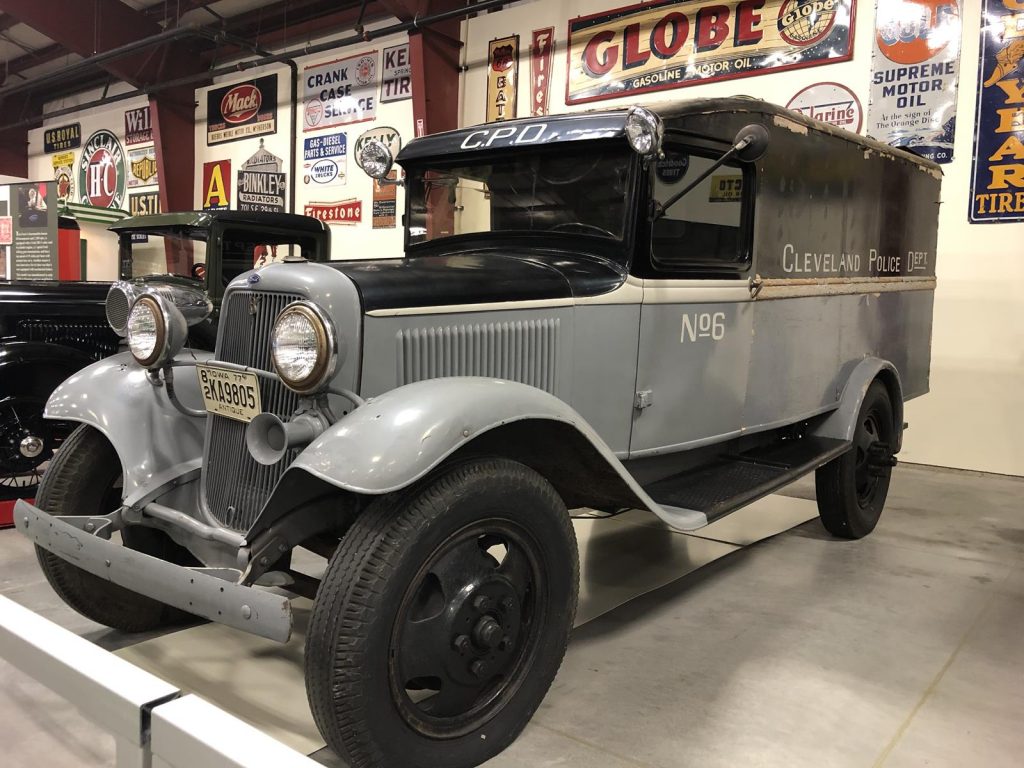 Those who remember grandparents who lived in homes heated by coal will be drawn to the 1937 Mack AC High Lift Coal Truck, whose bed, when tipped, would dump coal down the coal chute. Another crowd-pleaser is the U.S. Mail truck outfitted with skis for winter runs.

Probably because I’m into soft drink collectibles, my favorite artifact was the 1944 yellow-and-red Coca-Cola delivery truck typical of those used by the company from 1937-1951. The truck languished in a salvage yard in Dixon, Illinois, for 43 years until it was rescued in 1995. It sat another 20 years on the Iowa 80 property before being restored right down to its authentic wooden crates holding 4,800 glass bottles of Coke supplied by the local distributor. To make the crates as true to the 1940s as possible, an antique stenciling machine was acquired and is on display (under glass) across from the truck. Visitors can activate the machine and see how the red Coca-Cola logo is applied to the yellow crate.

A Truck Stop Unlike Any Other

The Iowa 80 Truckstop, surrounded by cornfields, is a true oasis and backs up its “world’s largest” claim in several ways. It can park the most trucks (900), serves the most customers per day (5,000 on average), occupies the most land (100 acres) and boasts the largest main building (130,000 square feet).

Travelers who stop at this super station will find the Iowa 80 Kitchen, a full-service restaurant open 24 hours a day, and a food court populated by familiar names like Taco Bell and Wendy’s. They can shop for everything from snacks, toys and sunglasses to Minnetonka moccasins.

The cavernous Super Truck Showroom, with three restored semis on display, is a candy store for truckers, offering 50,000 items, from signal lights, hub caps, steering wheels and window screens to all things stainless and chrome. The Custom Shop offers an embroidery service for personalizing shirts, caps, towels and blankets.

On the building’s second level, truckers can make use of the laundry, take a shower, get a haircut, relax in the theater, work out in the fitness room, or see the dentist or chiropractor. A self-serve dog washing station, called Dogomat Pet Wash, is near the Truckomat Truck Wash.

Iowa 80 has several places for selfies or group photos, including the service station storefront by the gas islands, billboards on the building’s north side and the big “World’s Largest Truckstop” sign.

Admission to the Iowa 80 Trucking Museum is free, but donations are accepted. Group tours are available. For more information, visit www.iowa80truckingmuseum.com.