History Looms Around Every Corner of Downtown Lexington, Virginia 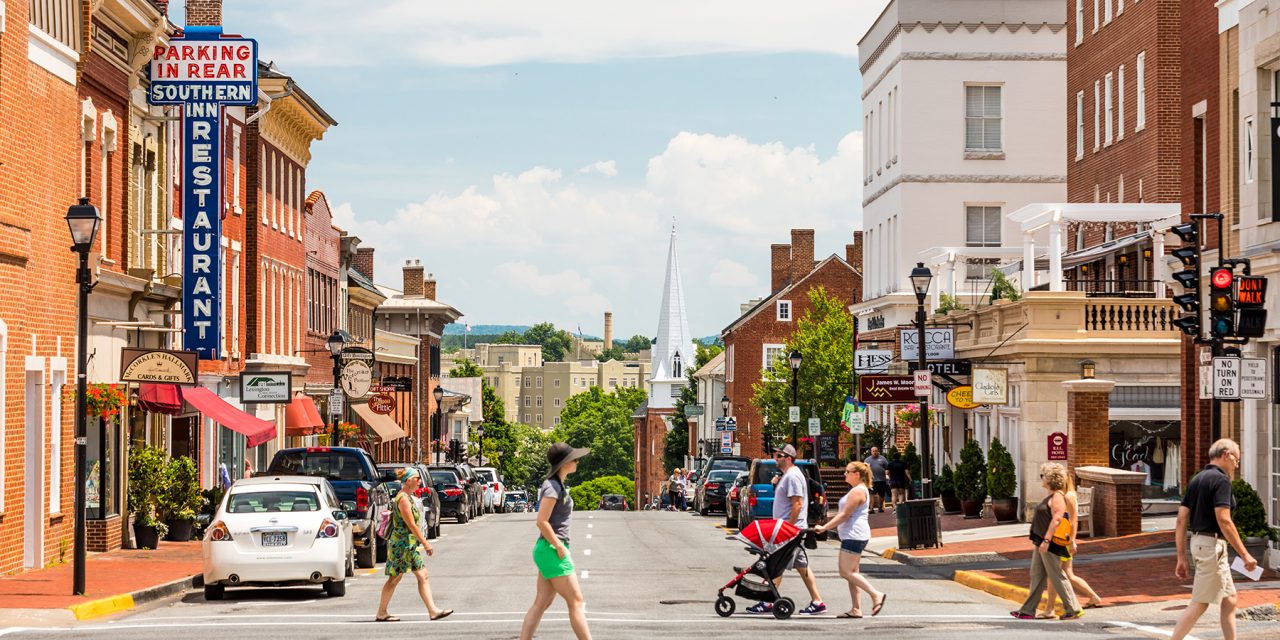 Picturesque college campuses, an inviting Main Street and vestiges of the past flavor this small Shenandoah Valley town

Cozy, compact and drenched in history, downtown Lexington, Virginia is the epitome of small-town charm. Brick sidewalks and 19th century buildings flanking Main Street help paint a picture of bygone days. Blocks away from the eclectic array of shops, art galleries and eateries, historical attractions tell the stories of some of America’s most famous Army generals.

Lexington, population 7,100, serves as the southern gateway to western Virginia’s Shenandoah Valley. The seat of largely rural Rockbridge County, it lies three hours from Washington, D.C. The Blue Ridge Parkway, running along the crest of the Blue Ridge Mountains, is only 15 minutes from Lexington. 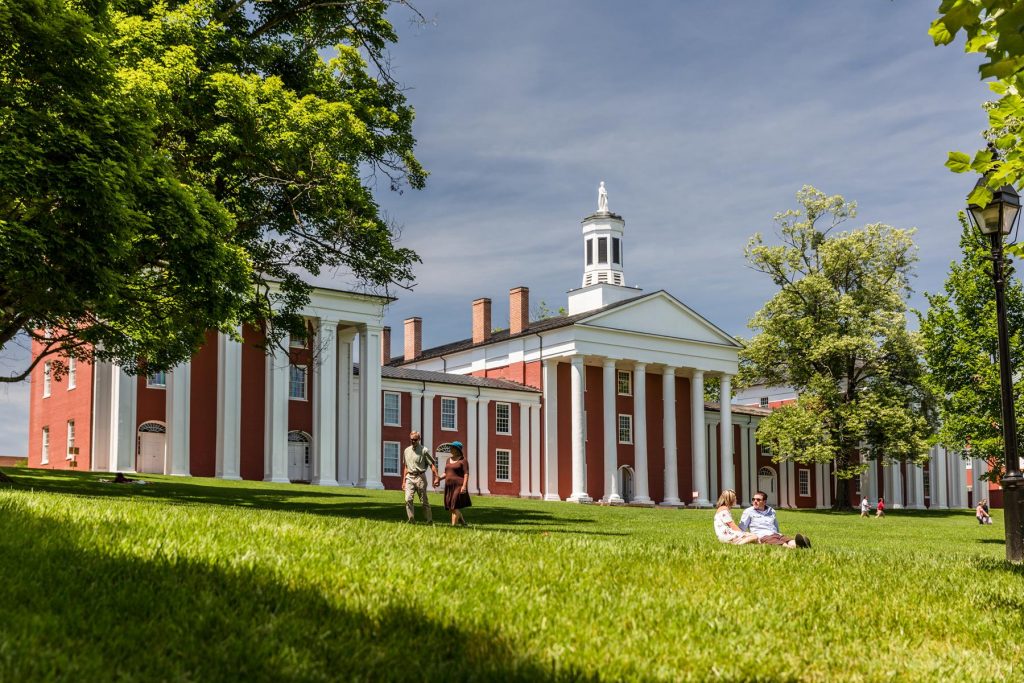 Two of Lexington’s chief tourist draws are college campuses rich in tradition. The leafy grounds of Washington and Lee University, with its colonnaded buildings and sloping lawns, provide the ideal setting for a small liberal arts school. Next door, cadets in uniform stream in and out of the Gothic buildings of Virginia Military Institute (VMI), the nation’s first state-supported military college.

Plenty to See at Washington and Lee

Lee Chapel & Museum, a Victorian brick structure built in 1867, is the focal point of Washington and Lee. Visitors to the chapel’s auditorium often think the marble statue of a recumbent Robert E. Lee is the Confederate general’s tomb, but Lee is actually interred a floor below in the Lee family crypt. In 1865, soon after the Civil War ended in the defeat of his beloved South, Lee assumed the presidency of the school, then known as Washington College, and served in that position until his death in 1870.

The museum on the chapel’s lower level contains many artifacts with connections to Lee and George Washington. The latter’s financial gift to the college (originally known as Augusta Academy) kept it out of bankruptcy. A statue of Washington on the hilltop Colonnade watches over students walking across campus, and the earliest known portrait of Washington, by C.W. Peale, is on display in the chapel museum, along with a painting of Lee. The museum exhibits Lee’s office just as he left it. Under Lee, the college gained national stature. It became Washington and Lee University a month after his death.

Outside the museum is the grave of Traveller, Lee’s trusty horse. The tall, handsome American Saddlebred, iron gray with a black mane and tail, served the general during the Civil War and became a fixture on campus. Students could almost set their clocks by Lee’s late afternoon rides into the surrounding hillsides.

Two other prominent generals—Thomas “Stonewall” Jackson and George C. Marshall—are part of VMI’s heritage. For 10 years before the Civil War, Jackson taught natural and experimental philosophy (physics, mechanics, science, technology) and artillery tactics at the school. Virginia Military Institute Museum, which occupies two levels of Jackson Memorial Hall, displays the bullet-scarred raincoat worn by Jackson when he was mortally wounded by his own men at the Battle of Chancellorsville. Also on display are a blood-stained handkerchief and Jackson’s horse, Little Sorrel, preserved for the ages. 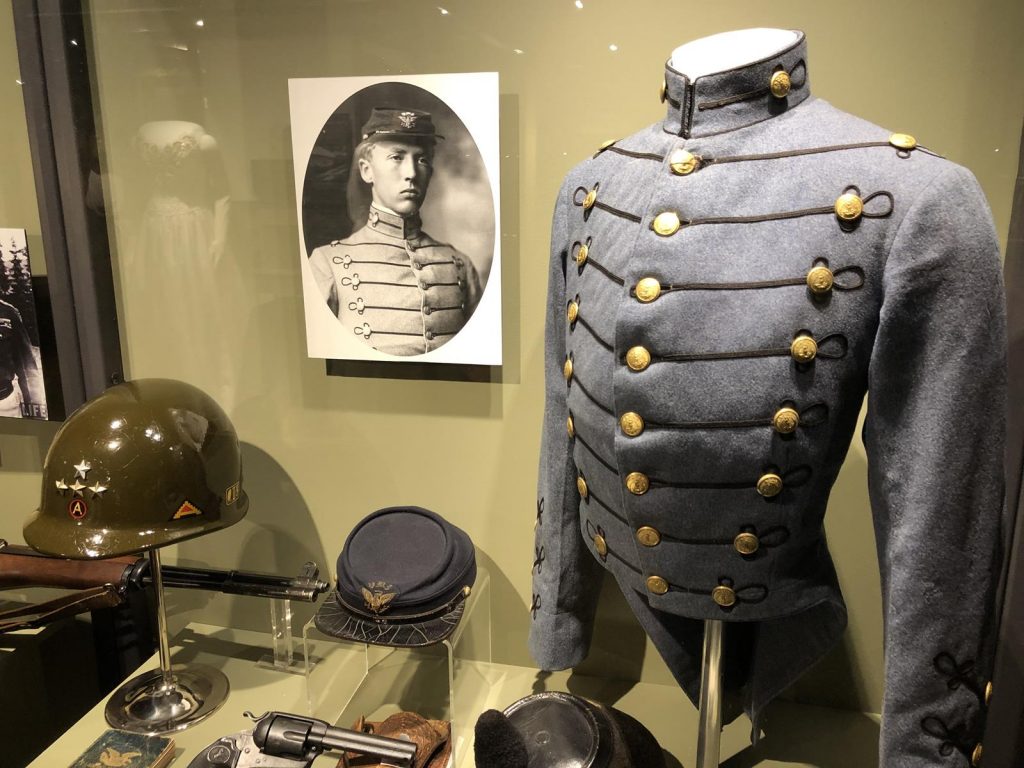 Other VMI Museum features include a replica of a cadet barracks room on campus, the shiny helmet of Gen. George S. Patton and a vast collection of antique firearms. Cadet-guided tours of the VMI campus leave daily at noon from the museum. Time your Lexington visit right and you may catch the Corps of Cadets Parade at the school’s parade ground, a dazzling demonstration of rifle drills.

The national George C. Marshall Museum and Library, an independent non-profit on the VMI post, honors America’s first five-star general (VMI class of 1901). Marshall’s remarkable career led to appointments as U.S. Army chief of staff, U.S. secretary of state and U.S. secretary of defense. He is remembered most for the Marshall Plan (aiding the reconstruction of post-World War II Europe), for which he received the Nobel Peace Prize. His Nobel medal is on display. 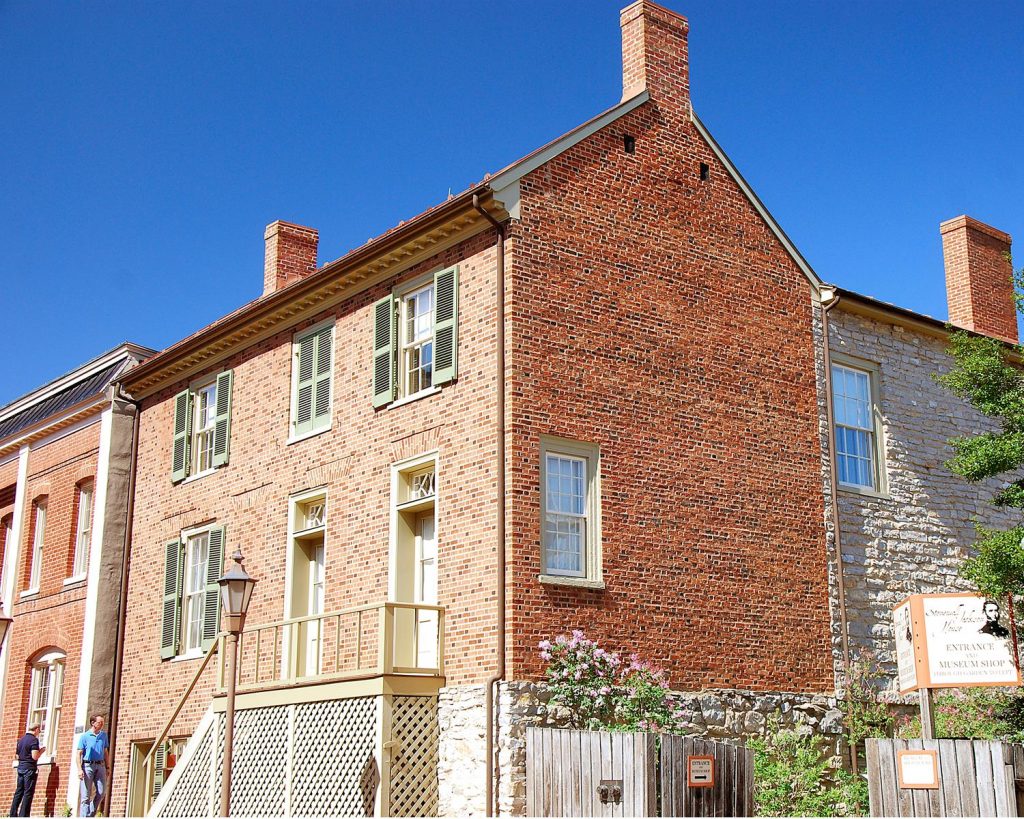 For a peek into the personal life of Jackson before the Civil War, groups can tour downtown’s red-brick Stonewall Jackson House Museum, part of the VMI Museum System. Rather than talk about his Civil War exploits, guides discuss Jackson’s life in Lexington, describing him as a hard-driven VMI instructor and a devout Christian who taught a Sunday school class for black children. A six-minute video is a good introduction to the house, which claims several original family pieces, including a desk, bed, quilt, marble-top table, coffee grinder, walking stick and leather box; other furnishings are period antiques. Jackson is buried in Lexington’s Stonewall Jackson Memorial Cemetery.

The Georges’ buildings, exquisitely restored in 2014, have served as residences, shops and inns over the course of their 200-year existence. Works by Virginia artists adorn the guest rooms, some of which have fireplaces. Amenities include Frette bed and bath linens and Peacock Alley blankets. Every room affords views of Washington and Lee, VMI, Main Street or House Mountain. (thegeorges.com).

To further soak up Lexington’s vintage vibe, consider a horse carriage tour. Or drop by the Lexington Visitor Center and pick up a walking tour map with descriptions of 45 historic downtown stops, including some at the colleges. For the brave, there are entertaining ghost tours offered from Memorial Day weekend through Halloween.

Along with the pleasures of historic Lexington, Natural Bridge State Park anchors tourism in this part of the Shenandoah Valley. Located 13 miles south of town via U.S. Route 11, it’s named for the 215-foot-high limestone arch on land once owned by Thomas Jefferson, who called the awesome span “the most sublime of Nature’s work.”

To see Natural Bridge up-close, visitors walk down 137 steps from the big visitor center building and then take the flat, .8-mile trail that goes underneath the landmark and follows Cedar Creek as far as Lace Falls. They can stop along the way at Monacan Indian Living History Exhibit to examine the thatched-hut settlement and see demonstrations of traditional cooking, weaving, pottery making and hide processing. Virginia’s Monacan people count 2,000 enrolled members, having gained federal recognition only a few years ago. Less active travelers can take a shuttle bus down to the creek. Cedar Creek Cafe offers views of the gorge and its rock bridge. 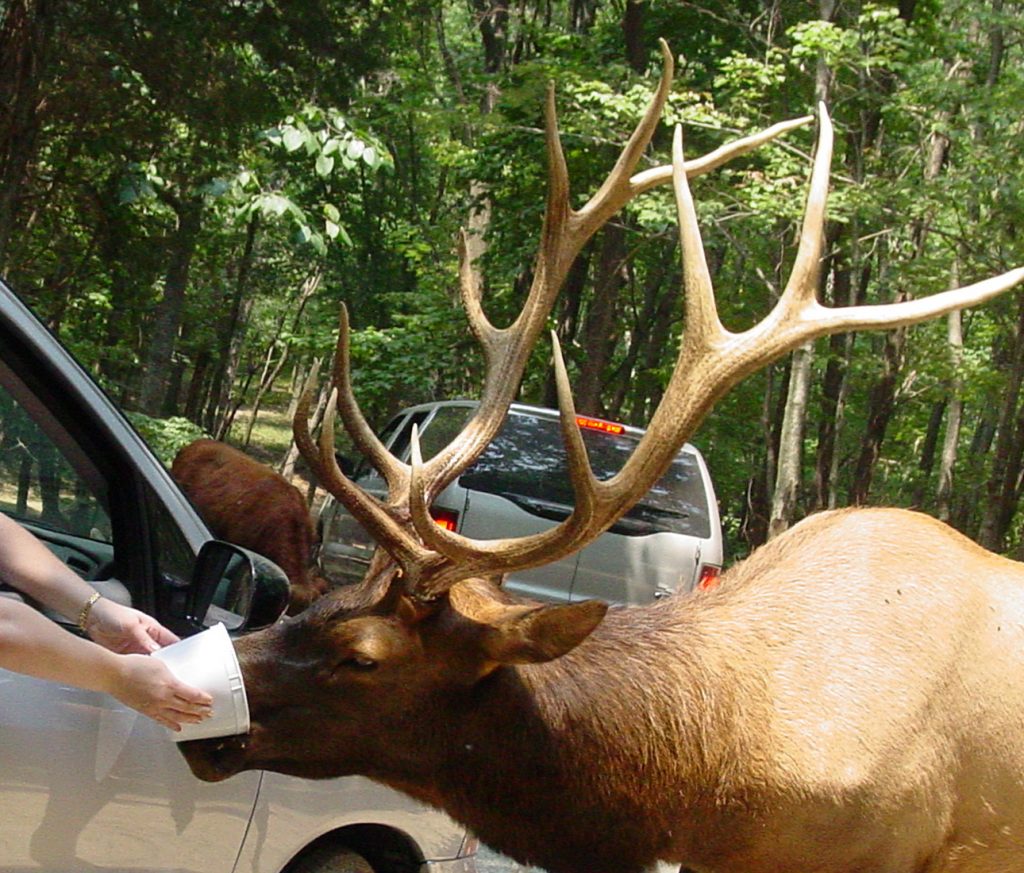 Across the road from the Natural Bridge visitor center stands the stately, 120-room Natural Bridge Historic Hotel and Conference Center. The area outside the park has its own attractions. At Caverns at Natural Bridge, the deepest caverns on the East Coast, you descend 34 stories underground on a 45-minute tour that features rooms like the Colossal Dome. Animal encounters are available at Natural Bridge Zoo and the drive-through Virginia Safari Park, home to more than 1,000 free-roaming creatures, from llamas and bison to zebras and ostriches.

For 1950s nostalgia and heapin’ plates of comfort food, The Pink Cadillac Diner makes the perfect group lunch spot in the Natural Bridge area. Painted pink with a 1956 pink Cadillac in front, the roadside restaurant dishes up stick-to-the-ribs favorites like country-fried steak, grilled country ham, pork chops, and meatloaf and mashed potatoes with generous dollops of brown gravy. The fresh-baked dinner rolls are great, and side dishes include mac ’n’ cheese, buttered corn, applesauce, baked apples, onion rings, french fries and sweet potato fries. The Shut Yo’ Mouth! Burger is a cheeseburger topped with pulled pork, the Elvis Burger a half-pound double-decker. Diners are serenaded by Elvis Presley hits and other ’50s tunes, and pictures of Elvis, Marilyn Monroe, John Wayne and other stars of yesteryear adorn the walls.

A favorite shopping stop on Route 11 is Layne’s Country Store, where tour members can stock up on country bacon and ham, Virginia wines, Virginia peanuts, apple butter, moonshine jelly and every flavor of jam imaginable.

The countryside around Natural Bridge also is home to Halcyon Days Cider Co., a small-batch cidery where the highlight is a labyrinth shaped around 2,000 apple trees in 50 varieties. The 1.7-mile path, with sweeping views of the Blue Ridge and Allegheny Mountains, is modeled after the Chartres Labyrinth at Chartres Cathedral in France. Asian pears are the star at nearby Virginia Gold Orchard, a family-run farm that also sells honey, persimmons, chestnuts, Asian pear marmalade and a variety of locally grown produce.

For more information on Lexington and Rockbridge County, visit lexingtonvirginia.com.