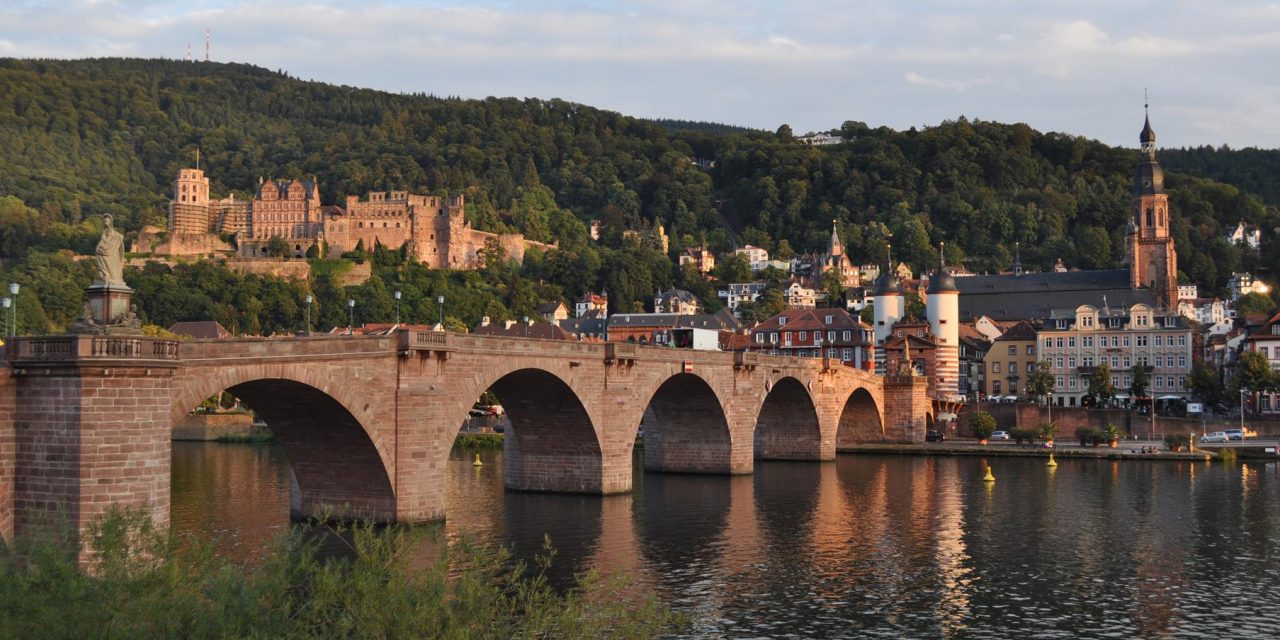 Centuries-old treasures intrigue travelers in places like Augsburg, Heidelberg and other towns

Historic Highlights of Germany, an organization representing 17 important cities, encourages travelers to become acquainted with some lesser-known historic towns. Each city has played a major role in changing the course of German, European and even world history. Here are highlights of six of these cities.

Augsburg’s Fuggerei was founded in 1516 by Jakob Fugger the Rich and his brothers as the world’s first social settlement complex for “hardworking and honest but impoverished citizens” of the Roman Catholic faith. The yearly rent was one Rhinish gulden, equivalent to less than one euro. Known as “the town within a town,” the settlement comprises 67 two-story structures housing 147 apartments, a church and a simple, elegant fountain. There is also a Fuggerei Museum you can visit. 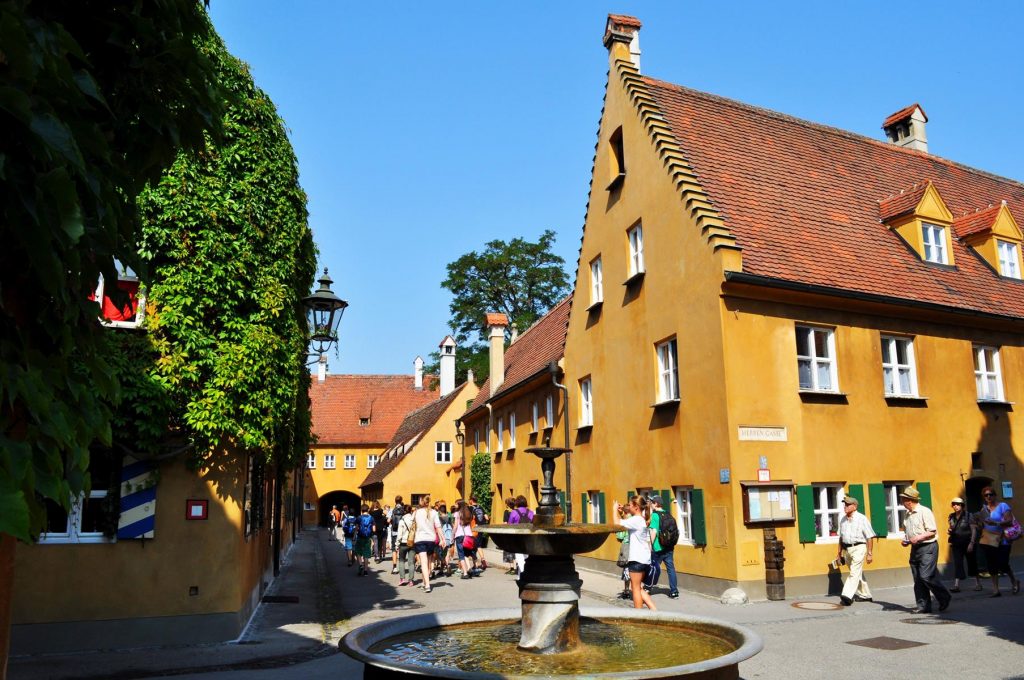 Augsburg’s monumental fountains symbolize the estate system of the Imperial City of past times: the Augustus fountain stands for the ruling estate, the Mercury fountain for the merchants’ estate and the Hercules fountain for the craftsmen’s estate. The oldest fountain, the Augustusbrunnen, is located on the main square and dominated by an Augustus figure. In addition to Augustus, there are four figures symbolizing Augsburg’s four rivers: Lech, Wertach, Singold and Brunnenbach.

The Rathaus (Town Hall), built by city architect Elias Holl between 1615 and 1620, is considered the most important secular Renaissance structure north of the Alps and expresses the self-assurance of the Free Imperial City of Augsburg. In 1985, on the occasion of Augsburg’s 2,000-year jubilee, restoration was completed on the 100-foot-long Golden Hall, with its imposing portals, murals and 55-foot-high, gold-leaf coffered ceilings and murals. 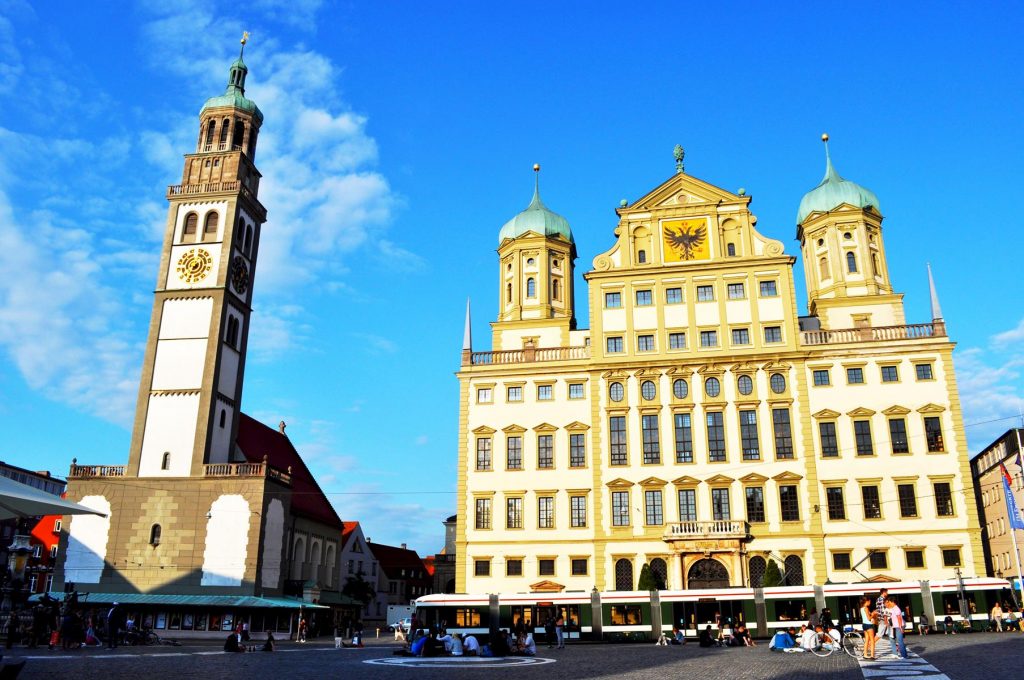 The nearly 250-foot-high Perlach Tower, a former guard tower located next to the Town Hall, offers a spectacular view of Augsburg.

The two churches in Augsburg named Ulrich and Afra—one is Roman Catholic, the other Lutheran—resulted from the Peace of Augsburg concluded in 1555 between Catholics and Protestants. Construction of the larger structure began in 1474 with the abbey church of the Benedictine monks. 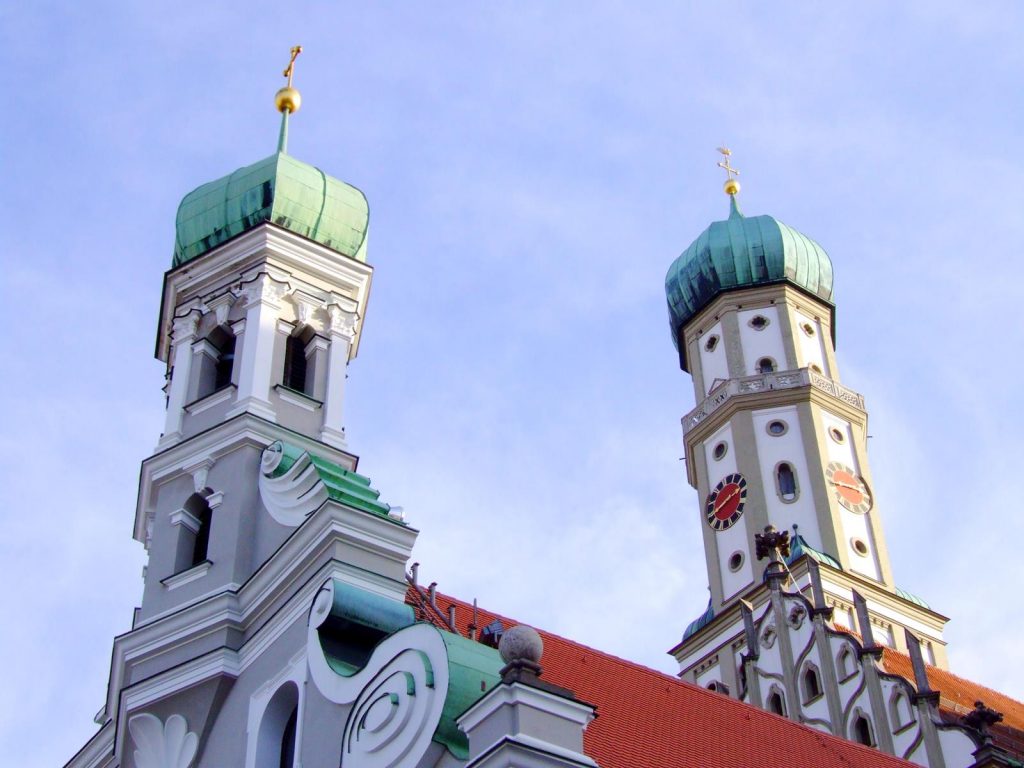 The choir, with three massive altars and the Crucifixion altar, were completed in the 16th and 17th centuries. The onion-domed tower is nearly 300 feet high; the church served as a prototype for the construction of numerous Baroque towers in Bavaria.

Freiburg’s colorful market takes place at the Cathedral Square, just as it has for more than 200 years. The Freiburg region is known for its cultivation of fruits, vegetables and flowers. Gourmet guides such as Michelin and Varta have spread the word about the area’s excellent cuisine. Freiburg’s main square is surrounded by architectural gems from Romanesque through Baroque times.

The historic red Kaufhaus (Merchants Hall) of 1520-1530 is a symbol of the importance of trade in medieval Freiburg. The municipal market, customs and financial administration building is identified as a center of trade by its arcades hall.

Due to the oldest crossing of the Dreisam River and the Oberlinden road junction, the Swabian Gate was of particular importance many years ago. Martin’s Gate is the oldest surviving gate tower from Freiburg’s first fortification, built at the beginning of the 13th century. 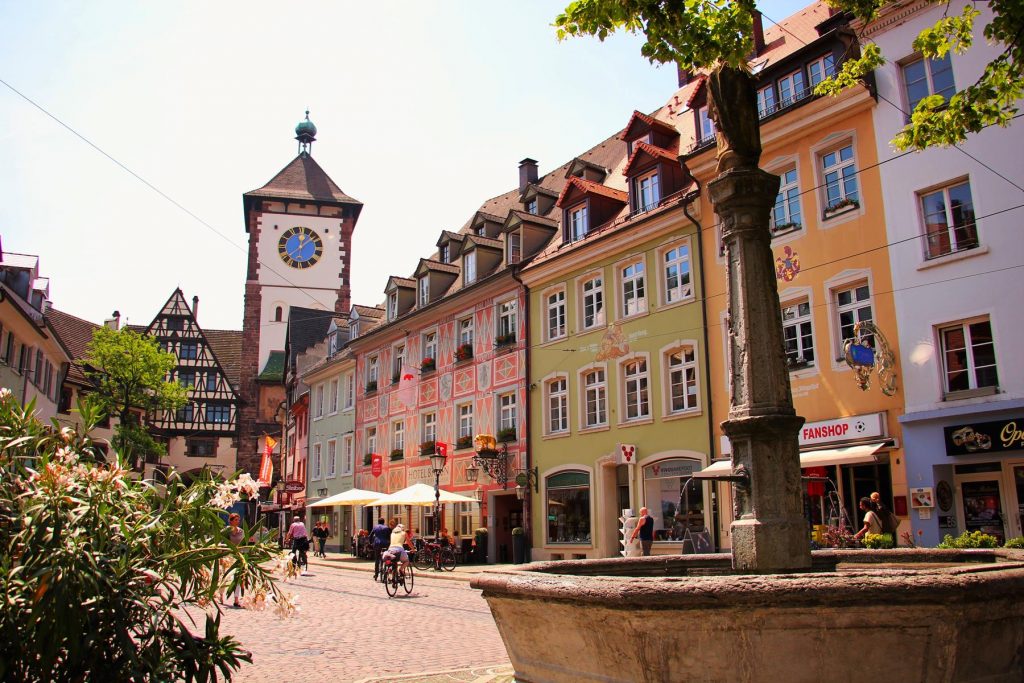 Freiburg locals fondly call the idyllic narrow streets between Swabian and Martin’s gates Klein Venedig or Little Venice. The area was once home to Freiburg’s trades craftsmen and known as the Schneckenvorstadt or Snail District, likely named because of the small spiral staircases found in the workers’ tiny houses and shops. 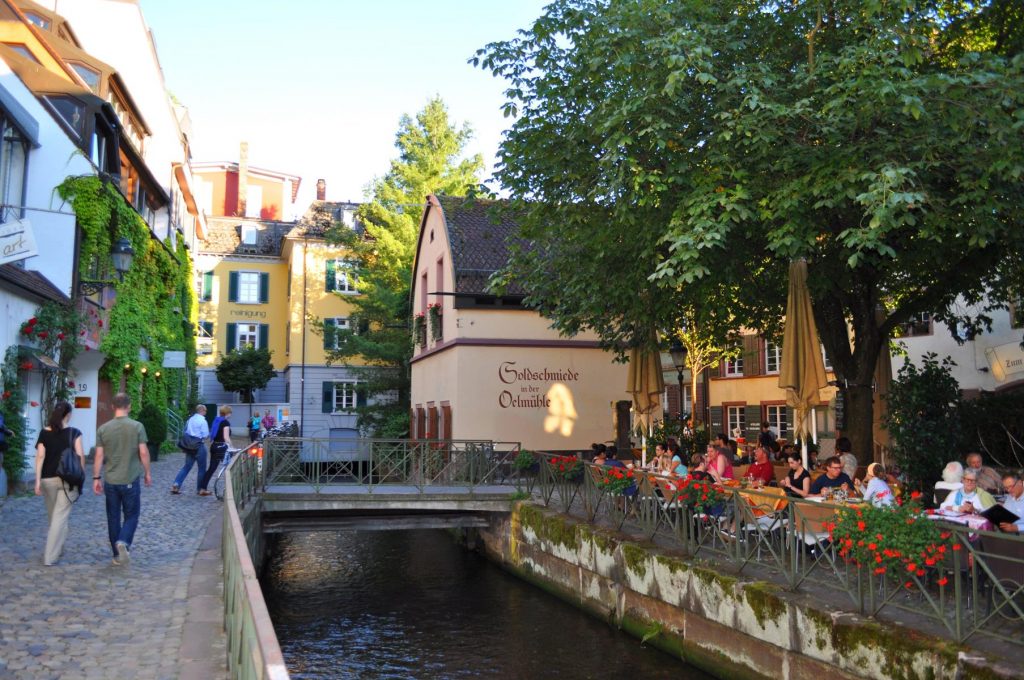 Visitors can enjoy the peaceful atmosphere and stroll through the streets past small galleries, inviting cafes and unusual shops. Also, the Bächle (small streams) are an integral part of the historical Old Town. Originally they were likely used to carry water for industrial purposes.

Freiburg is famed for its lush Mediterranean climate and for having the most hours of sunshine in all Germany. The hilly outskirts of Freiburg offer striking views of beautifully arranged vineyards that produce delicious wines. The many young vintners and historic wine estates ensure a steady supply of both traditional and modern wines.

The famous ruins of Heidelberg Castle overlook the Old Town. Construction lasted over 400 years and consists of ramparts, outbuildings and palaces in styles from Gothic to High Renaissance. The two dominant buildings at the eastern and northern side of the courtyard are considered to be two of the most important buildings in German architectural history.

The Alte Brücke (Old Bridge) was erected between 1786 and 1788. On the town side, the medieval bridge gate, originally part of the town wall, is especially well-preserved.

For more than 250 years, Heidelberg’s philosophers and university teachers have walked and talked along the Philosophenweg (Philosopher’s Walk) at the Heiligenberg—Heidelberg’s local mountain—inspired by a beautiful view of Heidelberg. 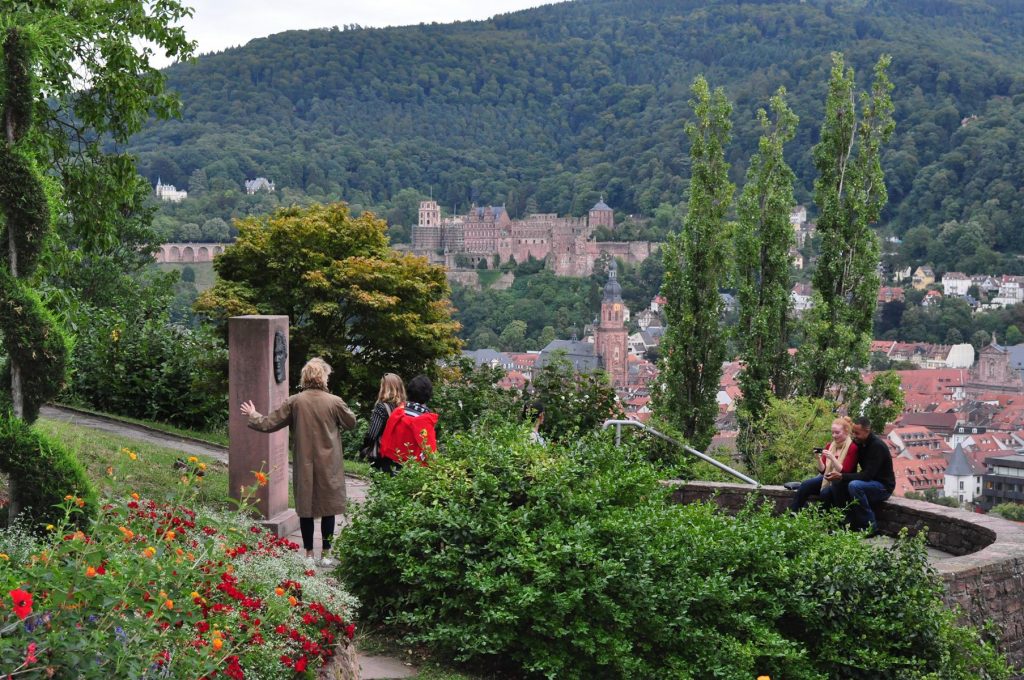 Church of the Holy Spirit

Heidelberg’s Romanesque basilica was first mentioned in 1239, and in 1398 it was replaced by a large church building with a nave constructed in the typical style of the late Gothic period. The chancel was completed by 1410, and the building of the nave was completed in 1441. The chancel contains the tombs of the Prince Electors of the Palatinate. 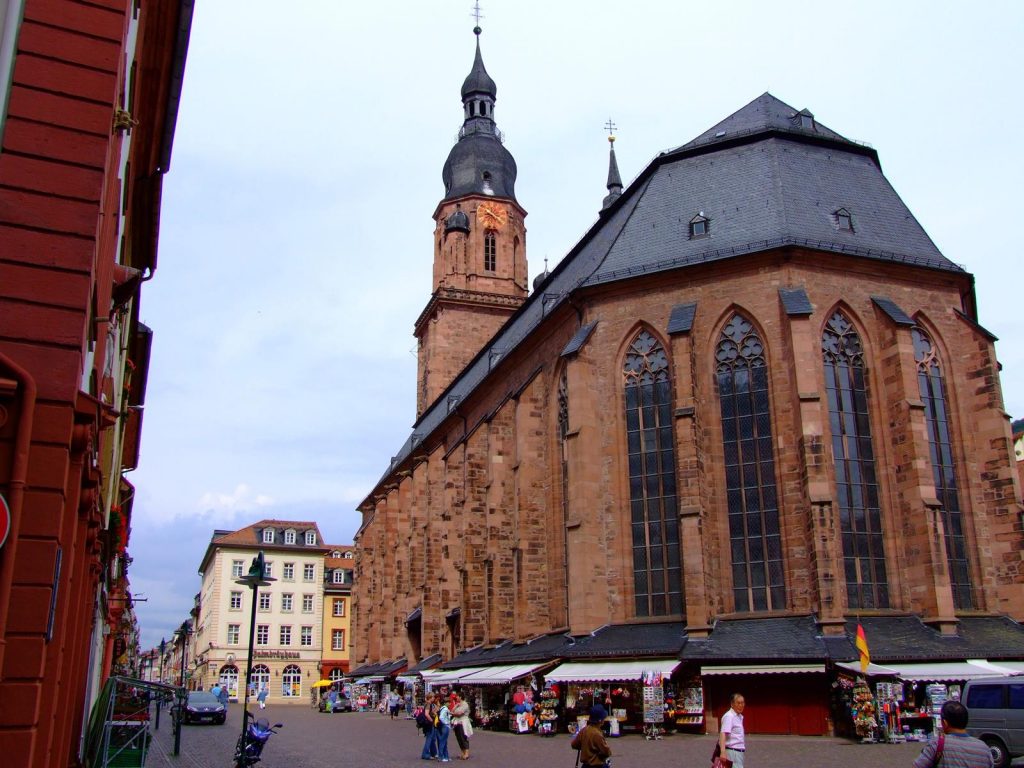 St. Peter’s Cathedral, the only example of French Gothic architecture in South Germany, is Regensburg’s best known landmark. After admiring the impressive facade, you can feel the building’s grandeur as you enter and see the superb light created by the glass windows. The world’s largest hanging organ with 5,871 pipes, hanging on four ropes, accompanies the famous boys’ choir, Regensburger Domspatzen.

On the UNESCO World Heritage list since 2006, the Old Town includes the historic quarter of Stadtamhof with more than 1,000 authentic buildings, bearing witness to the town’s significance during the Middle Ages. Regensburg is known as the best preserved medieval town in Germany, and its 12th century Stone Bridge over the Danube River is the oldest preserved bridge of its kind in the land.

The historic Sausage Kitchen, located near the Old Stone Bridge, is considered the oldest known sausage kitchen in the world, offering homemade sausages, sauerkraut and sweet mustard. The family business has been open to hungry visitors for 850 years.

The historic Porta Nigra Gate in Trier dates to about A.D.180 when the Romans erected public buildings of huge stone blocks.The slabs were cut by bronze saws powered by mill wheels and placed together without mortar. Behind the medieval facades of the Dom (Cathedral), architectural styles from the 4th through 18th centuries can be seen. It had been a Constantinian Palace, torn down after Constantine’s last visit to Trier and replaced by the largest Christian church in antiquity. Today, sections of the original walls and architectural features can still be seen.

One of Trier’s most charming areas is its former Domstadt (Cathedral City), a mostly intact medieval district. A warren of narrow alleys runs between medieval houses in this former city-within-a-city.

Visitors can also explore the expansive ruins of the Imperial Baths, remodeled during the 4th century as a barracks for more than 1,000 soldiers. And in the Amphitheater, you can sit in the same terraced seats occupied by fans cheering for gladiators and animal fights some 2,000 years ago. Be sure to visit the Rheinisches Landesmuseum-State Museum, an outstanding archaeological highlight.

Hohentübingen Castle in Tübingen looks like a castle but is the University of Tübingen with the Institute of Classical Archeology and its Museum of Ancient Cultures. The castle rises from the Schlossberg Hill as a mighty Renaissance four-wing building with round towers. The lords of Tübingen, who were raised to the status of palatine in the 12th century, resided here until 1342. 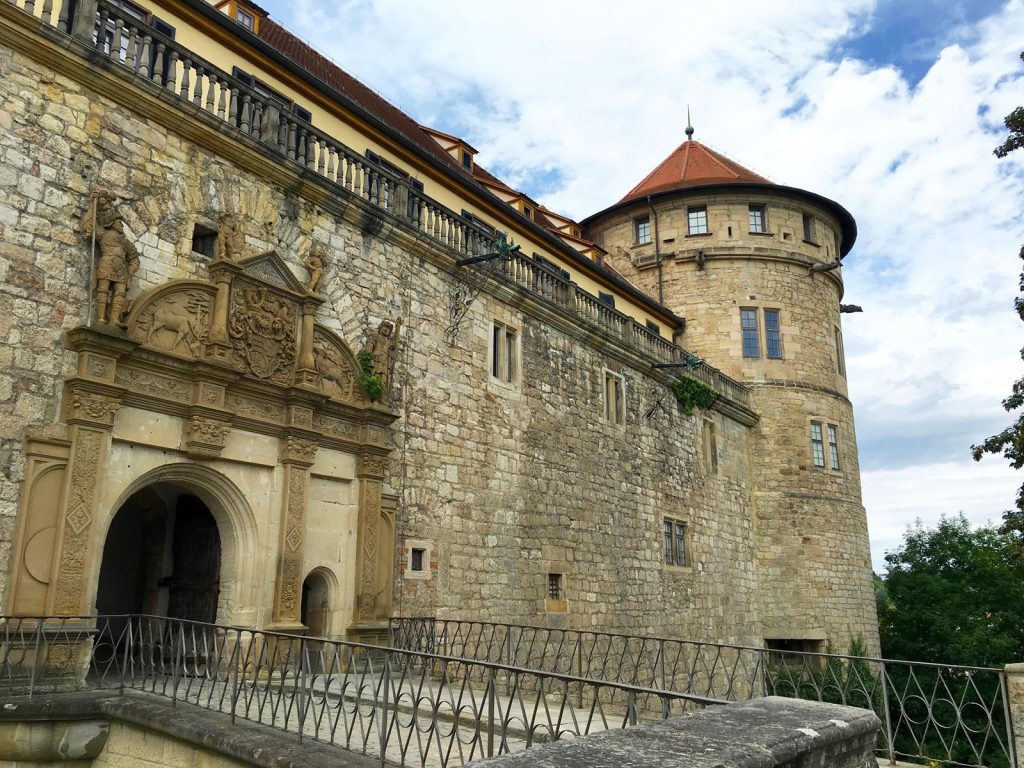 The Tübingen Town Hall, one of the most beautiful in Baden-Württemberg, is the oldest structure on the town’s main square, dating from 1435. The astronomical clock by Johannes Stöffler, the first professor of mathematics and astronomy in Tübingen, was built in 1511 and was initially installed on the first floor. In the Middle Ages, on the ground floor was the municipal salt warehouse, a prison and an open arcade hall, where bakers and butchers sold their goods.

Considering the city’s emphasis on tradition and local products, highlighted by its frequent farmers’ markets, it’s no surprise Tübingen is known for its rich and hearty Swabian cuisine. Plates like Spätzle (German pasta) are easy to come by whenever visitors long for an energizing, tasty meal.