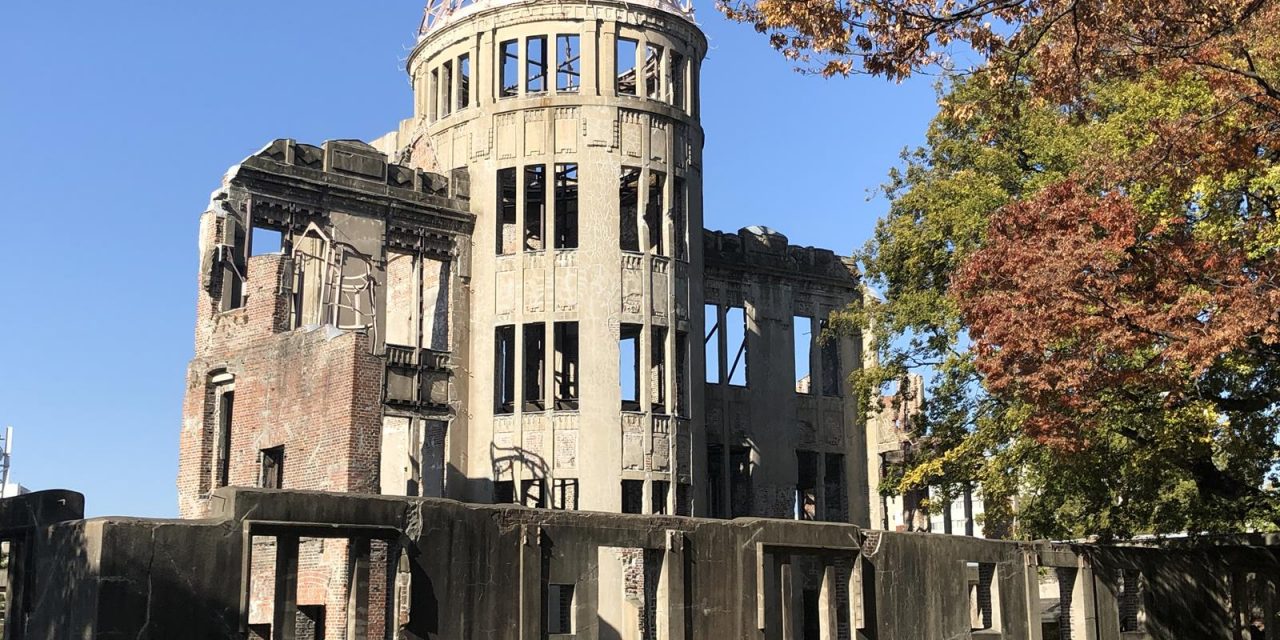 Shrines and museum exhibits in this Japanese city recall the suffering caused by the first atom bomb 75 years ago. The attack brought a swift end to World War II.

“Their hair was scorched and frizzy. Their faces, arms, backs, legs—their whole bodies were burnt. Blisters had burst and sheets of burnt skin hung from them like rags.

“The scene through my viewfinder was blurred by tears that streamed down my cheeks. This was hell.”

Such eyewitness accounts posted in a museum exhibit recall the horrors of the day 75 years ago when an American B-29 plane dropped the world’s first atomic bomb on Hiroshima, Japan. The date was Aug. 6, 1945.

Three days later, another Japanese city, Nagasaski, met the same fate, crumbling under the mushroom cloud created by the most destructive weapon ever unleashed. Less than a month after that Aug. 9 bombing, Japan’s formal surrender ended World War II. But the nuclear age had begun.

Hiroshima will forever be associated with the A-bomb, and every first-time visitor to the city of 2 million makes a pilgrimage to its Peace Memorial Park, a garden-like expanse bordered by two rivers. The pleasant greenspace is studded with monuments and memorials that honor the victims and promote world peace.

Stories of the suffering are told—sometimes quite graphically—in the galleries of the Hiroshima Peace Memorial Museum. Enlarged photos of the destruction and injured people are personalized with brief quotes from citizens affected.

Museum-goers also can view a short documentary about the bombing and watch video testimonies from survivors. Audio guides in five languages, including English, are available for rent. 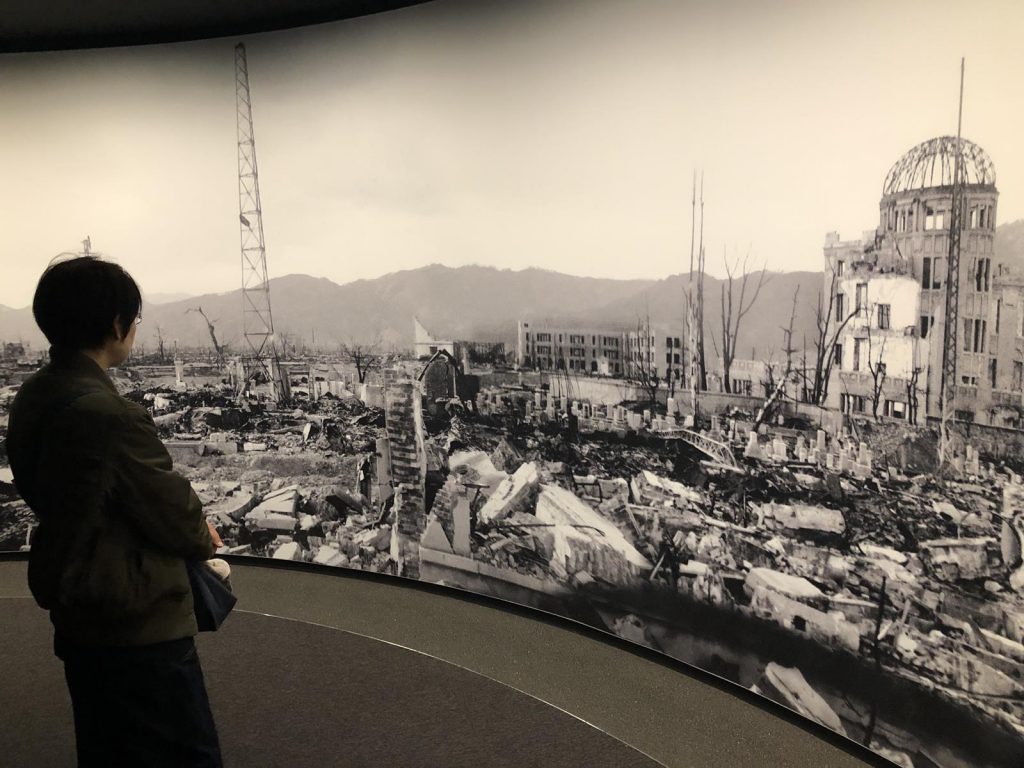 The bomb exploded about 1,900 feet above the city center, flattening everything within a mile of ground zero and triggering fires across 4.4 square miles. The blast wave shattered windows as far as 10 miles away. More than two-thirds of Hiroshima’s buildings were demolished, and 80,000 people (one-third of the population) were killed immediately. By the end of 1945, another 60,000 had died from radiation poisoning. Health issues like birth defects and cancer plagued generations to come.

Museum artifacts include a charred tricycle, a raggedy school uniform, fused metal from buildings and a safe recovered from a bombed-out store. One exhibit shows the lunch box and water bottle of 13-year-old Shigeru Orimen, a junior high school student. The caption explains, “This scorched lunch box and water bottle were found beneath his burned, skeletal remains by his mother. In the lunch box was a mixture of rice and barley, soybeans and sauteed shredded potato. Shigeru left home looking forward to this lunch, but never got to eat it.”

Other displays focus on the development and dangers of nuclear weapons, life in Hiroshima during the war and the city’s road to recovery after the blast.

Monuments Recall the Fateful Day in 1945

The only building in the city center to survive in any recognizable form was the domed Hiroshima Prefecture Industrial Promotion Hall, whose ruins were declared a UNESCO World Heritage Site in 1996. Known today as the Atomic Bomb Dome, it is the most famous landmark in Hiroshima and the centerpiece of Peace Memorial Park. The former exhibition hall, built in 1915, was within several hundred feet of what would become ground zero on Aug. 6, 1945, when thousands threw themselves into the Motoyasu-gawa River to escape the raging fires. Hundreds of corpses were seen floating in the water long after the blast.

The park’s Cenotaph for the A-bomb Victims is a short walk from the museum. A stone tomb underneath the center of its arch houses the names of all those who perished in the bombing. They also are remembered in the nearby Hiroshima National Peace Memorial Hall for the Atomic Bomb Victims, an underground shrine. 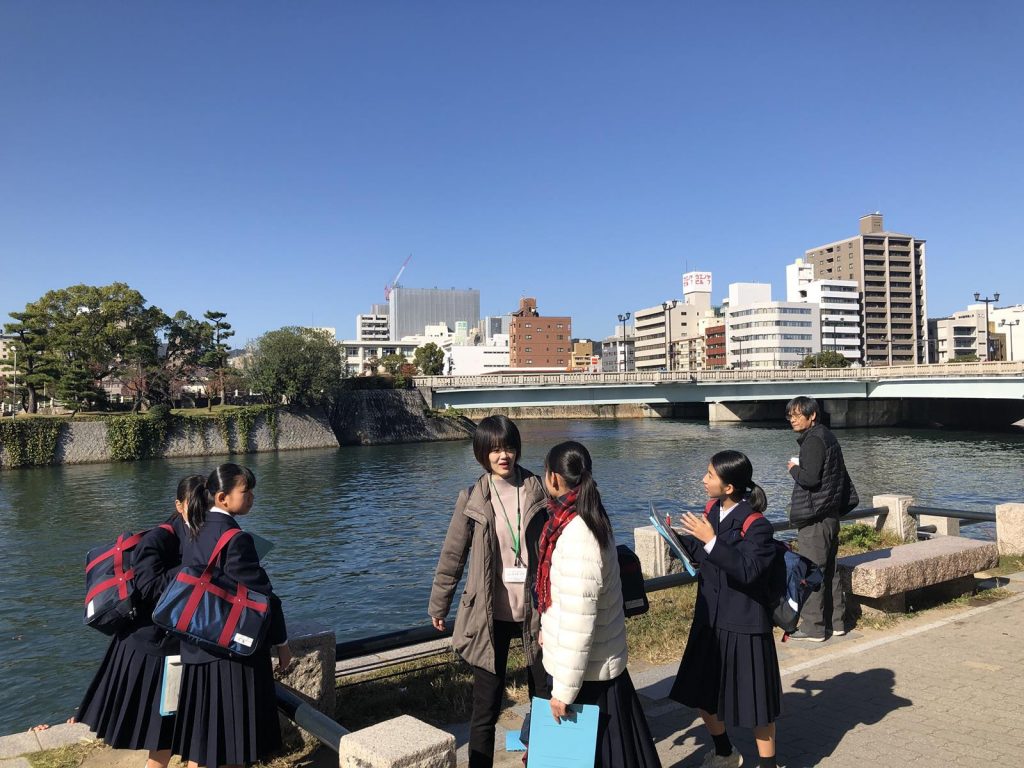 The Children’s Peace Monument, nicknamed the Tower of a Thousand Cranes, is dedicated to the memory of a junior high school student who believed she would recover from her radiation-caused illness if she folded 1,000 paper cranes. A symbol for a peaceful future, the monument is topped by a bronze statue of a girl with her arms outstretched, a large folded crane of metal rising above her. People from all over the world bring folded paper cranes to the site. Sasaki Sadako, the inspiration for the monument, did not survive her illness.

From a dock near the Atomic Bomb Dome, visitors can take a 25-minute narrated cruise along the river, a water taxi or a boat to the popular tourist island of Miyajima. Street cars, a key mode of transportation in Hiroshima, also serve the Peace Park area and symbolized the city’s resolve during the war—they started running again only three days after the nuclear bomb hit.

Survivors who rebuilt Hiroshima after the bombing envisioned their new city arising as a center of peace and culture. That vision has shaped the city today.

Cultural attractions include Shukkeien Garden, a gorgeous getaway in the heart of Hiroshima. Meticulously restored after the bombing, it offers cherry blossoms in spring, plum blossoms in winter and red maple leaves in fall.

At centuries-old Hiroshima Castle, the castle keep was rebuilt after being destroyed by the bomb and is now a museum of Hiroshima history. The top-floor provides a 360-degree view of the city.

The Hiroshima Museum of Art, located midway between the Atomic Bomb Dome and Hiroshima Castle, has modern Japanese art and the country’s foremost French Impressionist collection. A green oasis, the museum grounds feature maple trees and azaleas in the inner courtyard and a water channel surrounding the Main Hall, which was designed on the motif of the Atomic Bomb Dome. 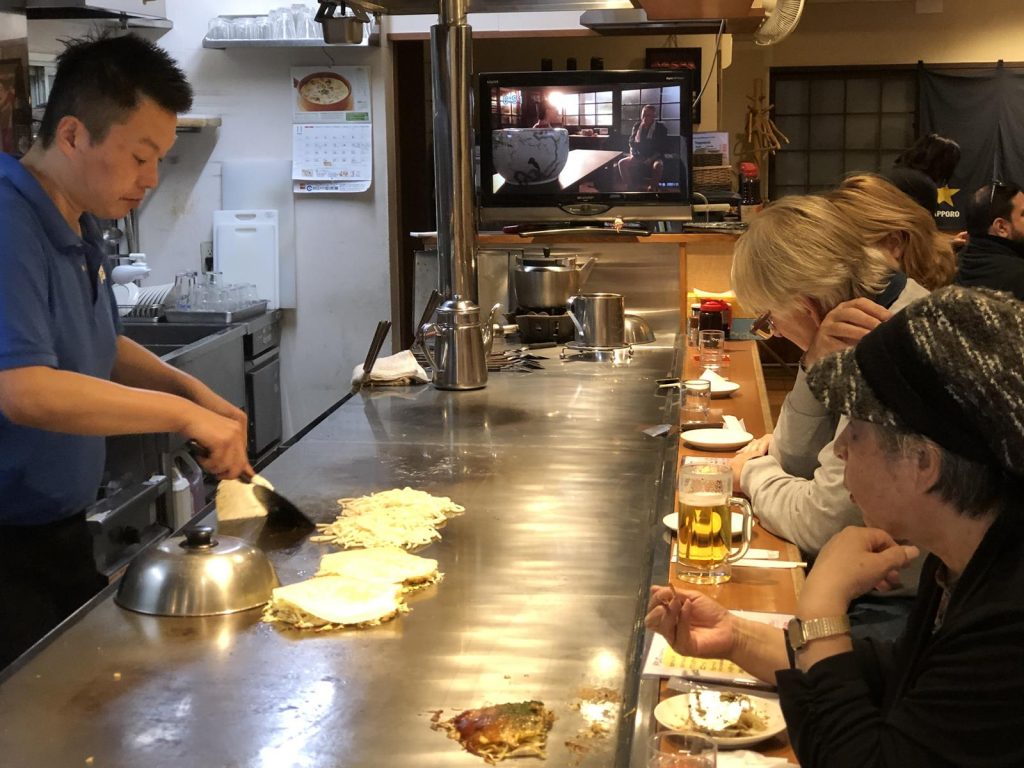 Foodies will want to try okonomiyaki, the “soul food” of Hiroshima. Made with a thin, crepe-like batter and grilled on a flat-top surface, it’s piled with shredded cabbage, bean sprouts, pork belly, noodles, egg and dried green seaweed flakes. Added toppings might include oysters or squid. A dark sauce made from ketchup, Worcestershire sauce, soy sauce and honey is drizzled onto the pancake from a squeeze bottle. The Hiroshima area counts more than 2,000 okonomiyaki restaurants, and the dish is available at many street stalls.

The Magical Island of Miyajima

Visits to Hiroshima often are paired with Miyajima, famed for its shrines, temples, and little shops and eateries. Mingling with tourists on the waterfront are friendly deer that may eat your maps, snacks or souvenirs. The red-orange O-Torii Gate of Itsukushima Shrine rises majestically from the sea and appears to float on the water at high tide. At low tide you can walk across the sand and go under its vermilion beams. Built from 600-year-old camphor trees, the gate, one of the most iconic images of Japan and a UNESCO World Heritage Site, stands on its own weight directly on the seabed.

Nearby is the Five-storied Pagoda, thought to have been built 600 years ago. Visitors can walk up to it but cannot go inside. 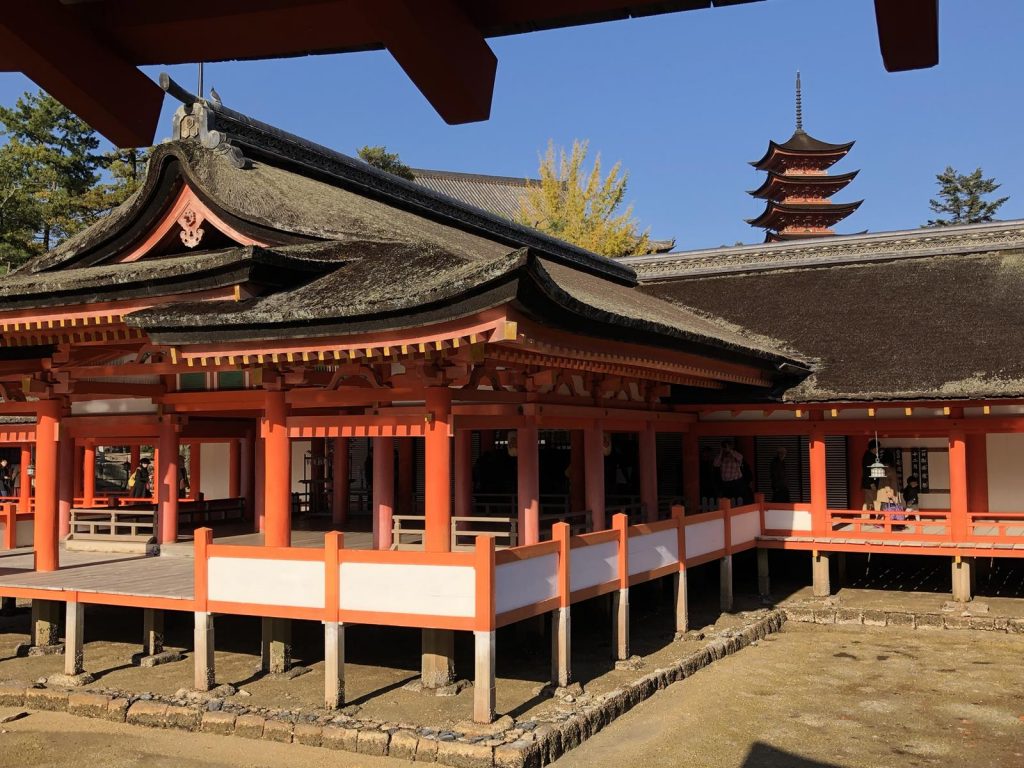 Daisho-in Temple, a five-minute uphill from Itsukushimi, sits at the foot of Mt. Misen. It features 500 beautiful statues and a cave with 88 Buddhist icons.

The Miyajima Ropeway takes passengers up to the mountain’s Shishiiwa Observatory, which offers panoramas of the pretty islands dotting the Seto Inland Sea. From the cable car’s Shishiiwa Station, you can hike to the summit of Mt. Misen or walk back down to town.

At Miyajima Brewery Grill & Craft Beer Restaurant, beer lovers can indulge in Miyajima Beer, which is made from natural spring water from the virgin forest on Mt. Misen.