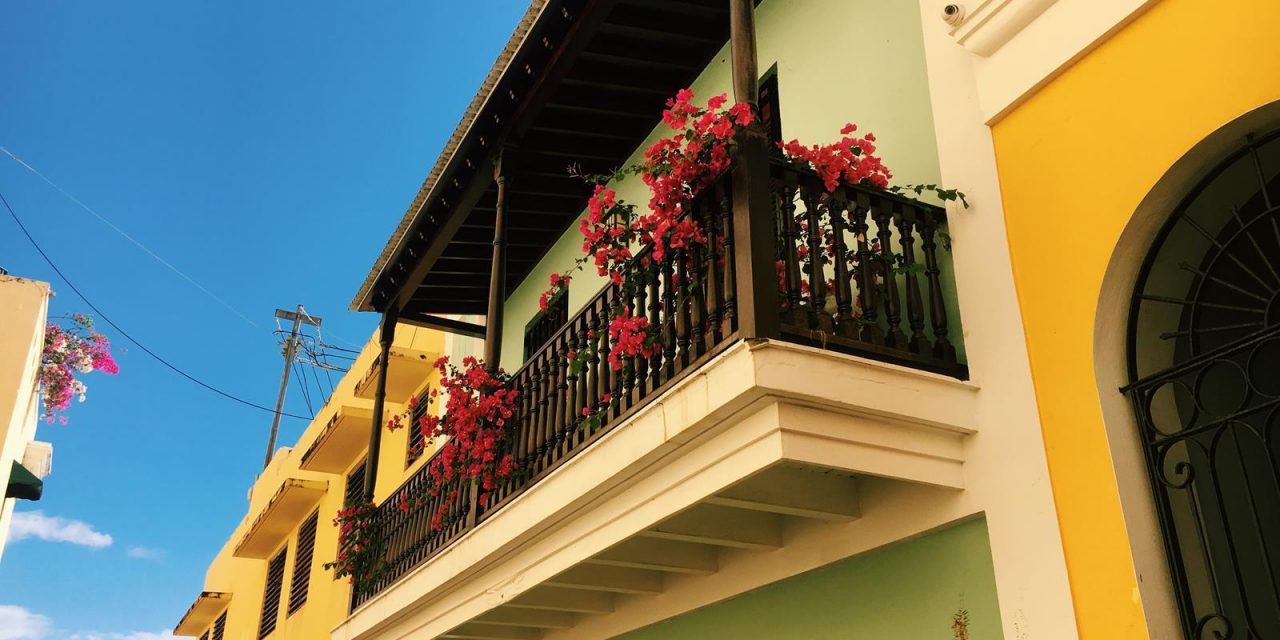 The oldest city under the American flag is rich in history, atmosphere

When visiting an island in the Caribbean, I’m looking for more than a beach. The more history and culture the better.

Pursuant to that thought, there’s no finer destination for communing with the past than Old San Juan, the atmospheric soul of Puerto Rico’s capital city, where pretty scenes await around every corner. Narrow, cobbled lanes host centuries-old buildings painted in pastels, trimmed with iron and wooden balconies, and adorned with ornate window treatments. Ramparts and sentry boxes of old Spanish forts afford stunning views of the sea.

Happily for those of us who like to explore cities on foot, Old San Juan is compact, safe and easy to navigate. As a commonwealth of the United States, moreover, Puerto Rico has an air of familiarity. The U.S. dollar is the coin of the realm, and residents speak English as well as Spanish.

On my recent post-cruise stay at the ideally located Hotel El Convento, the wonderland of museums, historic sites, shops, parks and plazas lay right outside my door. But if you’re in town for only the day, Old San Juan is easily accessible from your ship—it’s just a short uphill hike from the waterfront. 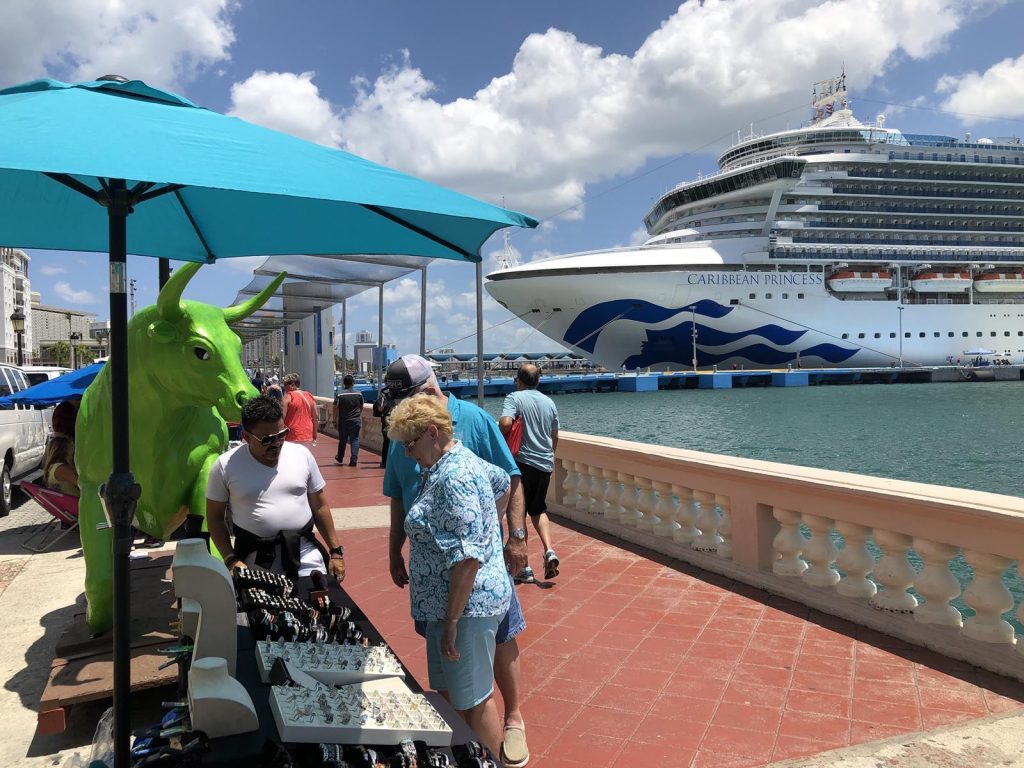 Vendors flock to the piers to hawk their wares.

San Juan Cathedral, the oldest building in town, was right across from my hotel (a former convent), so I started my sightseeing there. Founded in 1521 (same year as the city), the church was the second to be established in the New World. Most people come to see the marble tomb of explorer Juan Ponce de Leon, the first governor of Puerto Rico, and the body of religious martyr St. Pio displayed under glass.

Next, I walked down from the street to San Juan Gate, one of five access points built within the massive defensive walls that encircled the city. When dignitaries from Spain arrived by sea in San Juan, they passed through this red portal and walked up to the cathedral to thank God for a safe passage.

From San Juan Gate I turned right and followed the Paseo del Morro, part of a National Recreational Trail that skirts San Juan Bay for about a mile. The trail is part of San Juan National Historic Site, which is administered by the U.S. National Park Service; it provides a close look at the walls and base of Castillo San Felipe del Morro. Better known as El Morro (“the promontory”), the mighty fort—on a point of land bounded by the and Atlantic Ocean—is one of the city’s top attractions and for nearly 400 years symbolized Spanish power in the Caribbean. The walk took about an hour, but I finally arrived at the fort and spent several hours exploring its labyrinth of tunnels, ramps, stairways, turrets and cannon batteries. 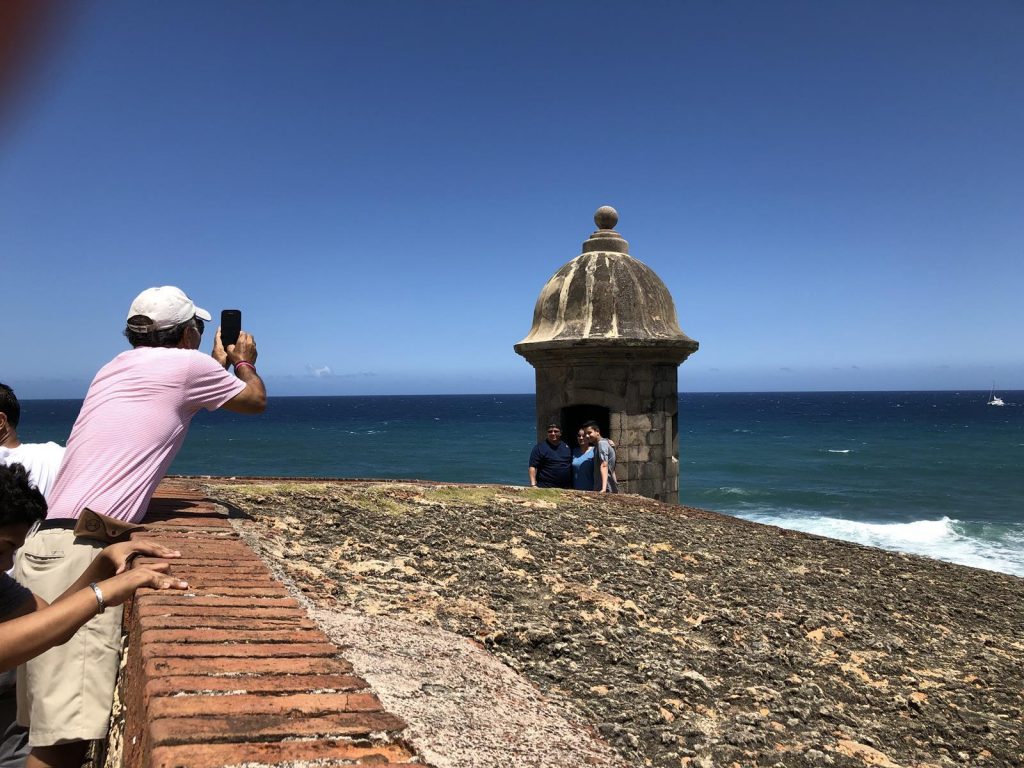 In El Morro’s casemates—vaulted rooms surrounding the main plaza that were used for storage, barracks and cannons—informational panels provide succinct commentary (in English and Spanish) explaining the fort’s history and Spain’s role in the New World. Puerto Rico, which Christopher Columbus claimed for Spain in 1493, was the first major island with fresh water that ships encountered as they sailed west from Europe—a welcome port after crossing the stormy Atlantic. Its strategic location was key in controlling access to a region that held silver, gold and other riches.

The end of the Spanish empire came in 1898 after the U.S. prevailed in the 109-day Spanish-American War. Spain’s defeat resulted in independence for Cuba and U.S. possession of Puerto Rico, Guam and the Philippines. Uncle Sam used El Morro as a military installation (Fort Brooke) in World Wars I and II until the National Park Service (NPS) took it over. 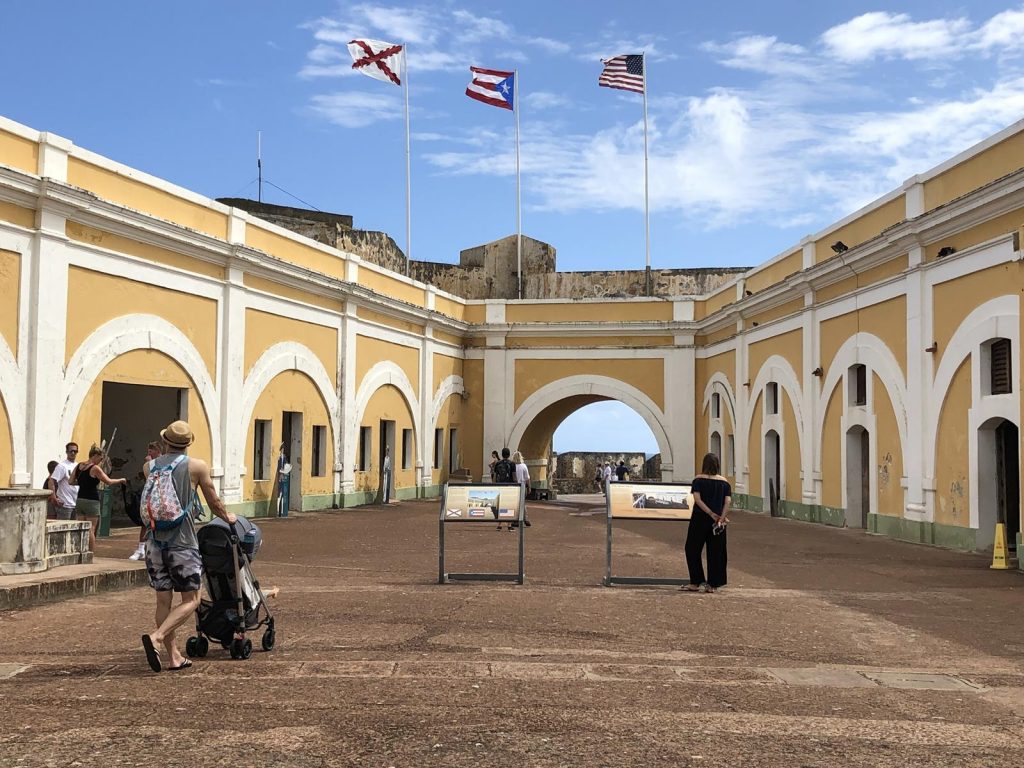 Fort San Cristobal, another NPS unit, defended San Juan from attacks by land. The visitor center’s theater shows a film featuring historical reenactors. (El Morro shows the same film, but seating is on benches in one of the casemates.)

At both forts and other points in the city walls, tourists pose for pictures in the domed sentry boxes, or garitas, that jut out over the sea. These iconic stone lookouts have become symbols of Puerto Rico’s heritage. The 28 garitas that remain vary slightly in shape and style as they are from different eras. Because people were shorter back then, all have low ceilings and doorways. 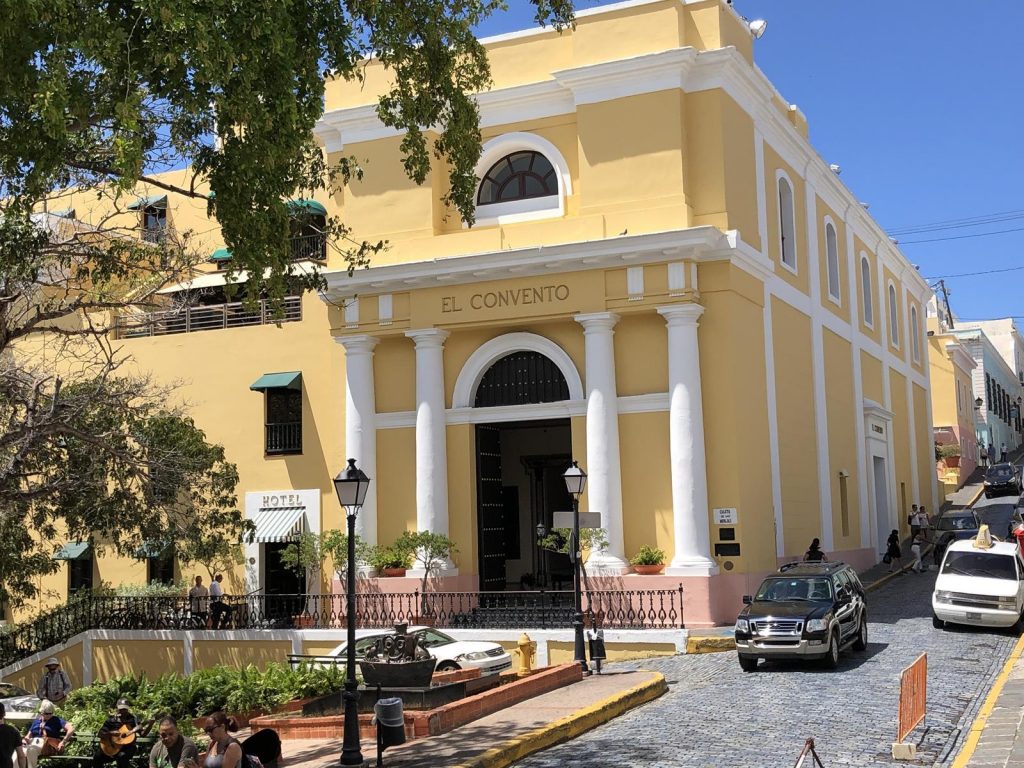 Hotel El Convento, housed in a former convent, stands across the street from San Juan Cathedral.

Other vestiges of Spanish colonial days reside in Casa Blanca, the oldest continuously occupied house in the Western Hemisphere. Dating back to the 1520s, the stately white residence was built as the home of Ponce de Leon (he died before he could move in) and housed his descendants for 249 years. Casa Blanca’s hilltop perch offers fine views of the city and bay, and its shaded gardens, with a gurgling fountain and tropical foliage, provide a cool respite from the heat.

The Museum of the Americas, not far from Casa Blanca and El Morro, focuses on Puerto Rican culture and the mixed-race society created by the fusion of three ethnic groups—Spanish, African and Taino Indian. The exhibit on slavery in the New World displays artifacts such as leg and neck shackles, a whip and branding iron, and recognizes those who were active in Puerto Rico’s 19th-century abolitionist movement.

Flapping pigeons take center stage in a little courtyard just a block from the umbrella display. Parque de las Palomas, or Pigeons Park, draws flocks of shrieking fun-seekers who come to mingle with birds that alight on their heads, arms and shoulders. Vendors by the gate sell bags of corn or pellets. You’ll see pigeons at rest in dovecote-style holes in the wall. The park sits atop a city wall, offering views of San Juan Bay and cruise ships in the distance, and has benches in a quiet area away from the bird-feeding frenzy. 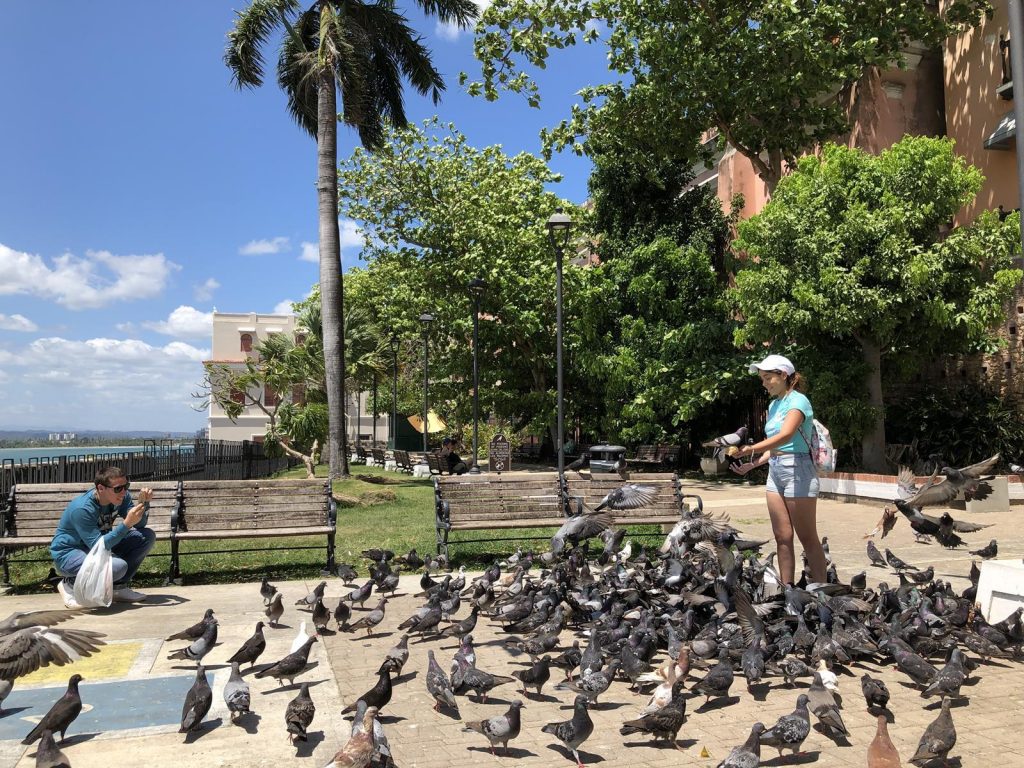 The parks, plazas and sidewalks of Old San Juan are packed on days when cruise ships are in port. Things were relatively quiet at the piers the first day of my hotel stay, but I noticed a huge difference the next day as Celebrity, Carnival and Princess ships disgorged thousands of people. When ships come to town, vendors throng the waterfront along Calle La Marina, setting up stalls under tents and thatched patio umbrellas.

The best way to see Old San Juan is by hitting the pavement, taking time to admire the colonial architectural elements, balconies with hanging plants, and facades painted in a rainbow of colors ranging from lemon yellow and lavender to peach, pink and turquoise. Some of the streets are paved with blue-gray stones originally used as ballast on Spanish ships. 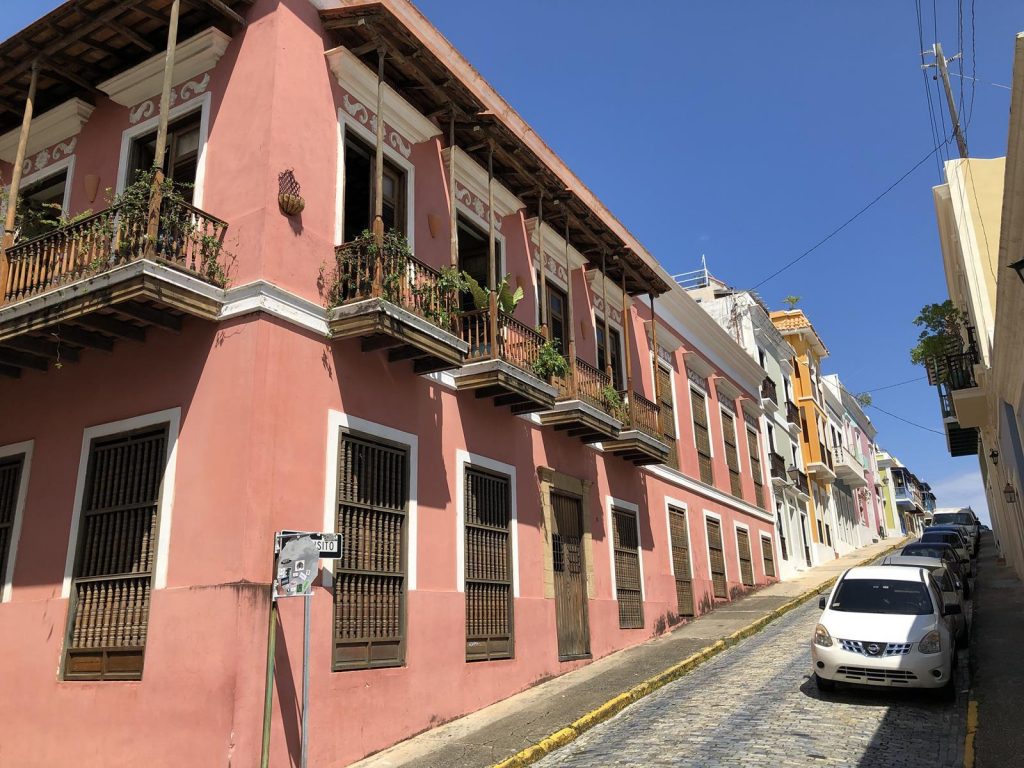 If you’re adventurous and want to try a local specialty, head to Ajo del Pais, a rustic restaurant on Calle San Francisco, one of Old San Juan’s prime shopping streets. I asked for mofongo, the island’s quintessential dish, and got a mound of mashed plantains with chicken, red and green peppers, and onions in garlic sauce. It also can be ordered with tomato sauce, and you can have it with octopus, shrimp or pork as well as chicken. Mofongo (starchy but good) usually comes with a side of rice and beans or french fries. Ajo del Pais has a roadhouse vibe with corrugated metal accents and board walls, tables and benches. It’s decorated country-style with straw hats, baskets, bunches of fresh plantains, a Puerto Rican flag, a picture of baseball great Roberto Clemente and antiques such as a washboard, ox yoke and kerosene lantern. 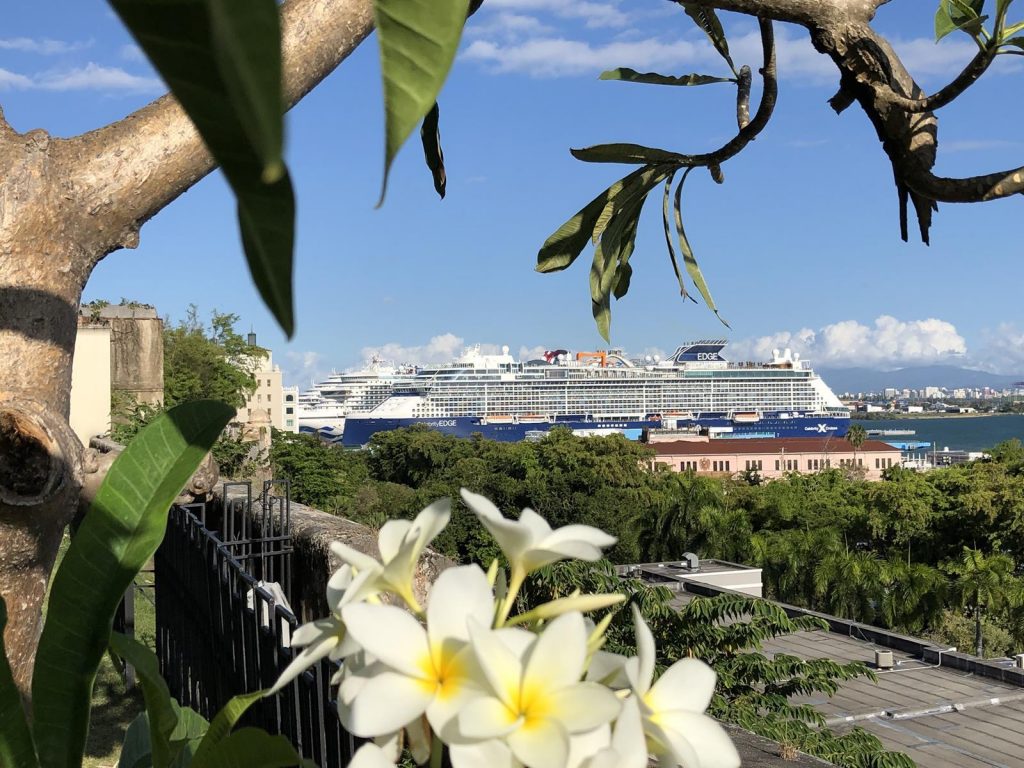 Visitors to Pigeons’ Park have panoramic views of the cruise ship docks.

The block of Calle Fortaleza leading to the guardhouse at the governor’s home is nicknamed the Umbrella Street because of its hundreds of colorful umbrellas suspended above the cobbled pedestrian way. When I visited, they were bright pink for breast cancer awareness.

Nearby Hotel El Convento, as the name hints, was a convent in an earlier life and today welcomes guests with Old World trappings and an aura of refinement. A member of Small Luxury Hotels of the World, it is the most exclusive hostelry in Old San Juan.

Extensive restorations, started in the early 1960s by Robert Frederic Woolworth, an heir to the Woolworth fortune, have preserved the integrity of the structure that housed nuns from 1651 to 1903. Woolworth spared no expense in remaking the decaying Cristo Street landmark into a grand, European-style hotel, furnishing it with Spanish antiques and artwork along with elaborate reproductions. 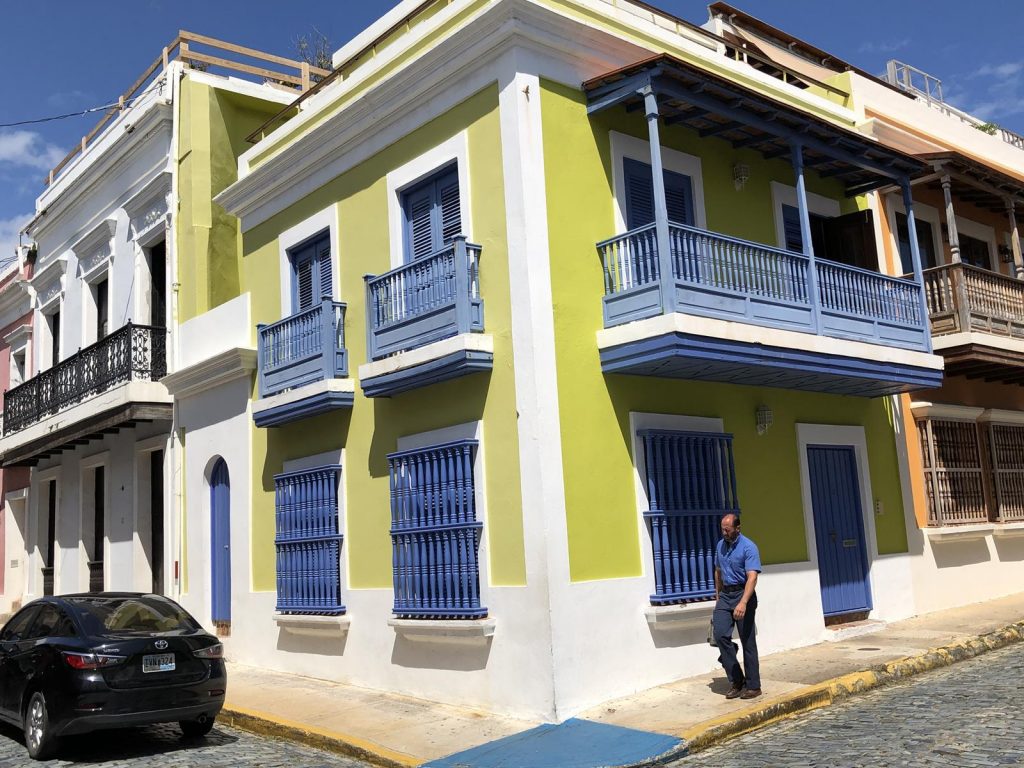 Exploring the cobbled streets of Old San Juan takes visitors back in time.

Of special note are the original archways, beamed ceilings and wide galleries surrounding the courtyard. Off the lobby, the chapel, with its massive door and stained-glass windows, is now a venue for weddings and banquets. Guests (and the general public) enjoy relaxing meals in the courtyard restaurant, and the rooftop terrace has a plunge pool and hot tub.