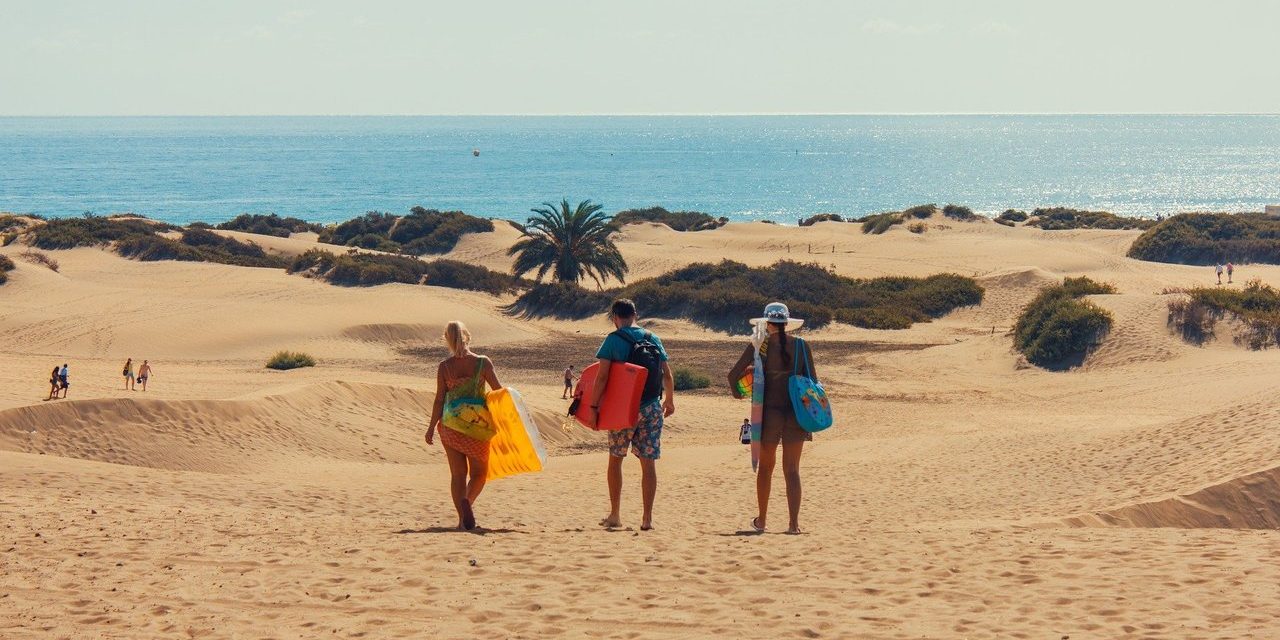 Be at one with nature and experience wide-open spaces

The Maspalomas beach, on the Gran Canarias’s southern coast, covers an area of over 1,000 hectares and have been listed as a nature reserve since 1987, meaning that there is official legislation limiting what types of activity can take place here, in a view to maintaining conditions favourable to the dissemination of the various wildlife forms which inhabit the area.

Indeed, there a truly eclectic range of life forms which call the beach their home. The one that arguably provides the most majestic spectacle, however, might the flocks of migratory birds who use the area as a breeding ground.

La Charca (the Pond) is a body of brackish water, meaning that it has a higher level of salinity than freshwater, but lower than pure seawater, where such magnificent creatures such as the osprey, the cattle egret and the black kite come to mate, year after year.

Aside from the migratory seabirds, the Maspalomas beach boasts an awe-inspiring array of lizards, insects and crustaceans, many of which are either endangered or at the risk of becoming endangered.

One of the life forms which is most emblematic of the area is the famous Gran Canaria giant lizard. This species of lizard is endemic to this area and grow up to 80 cm long. The rocky, temperate shrubland of the Mesopalamos beach is its natural habitat.

The abundance of life forms which the beach and its dunes, known as the Maspalomas dunes, boast make it a constant fixture in the itineraries of all the major tour guides who operate in the area.

But even if wildlife-spotting isn’t your cup of tea, a trip to the beach and dunes is still well worth the effort. Clear green-seawater and pristine sandy-beaches which look like they served as the basis for every representation of an island paradise ever conceived make the area an unmissable stop on your visit to the island.

In recent years, there has also been a rumor circulating on the internet in regard to the origin of the beach’s immaculately yellow sands. Namely, it has been suggested that the sand originated in the Sahara Desert. This theory, however, has been disproved and is little more than a myth.

Despite the fact that the sand didn’t originate in the Sahara, the landscape itself bears more than a passing resemblance to the Sahara Desert, which lies to its South. The similarities don’t end there either: the dunes themselves are can be categorized as “mobile dunes,” as can those found in the Sahara desert.

What this means is that the dunes have been stabilized to some extent by the vegetation which grows in and around them, but are still susceptible to erosion and formation caused by wind, meaning that the landscape here, like in the Share desert, is in constant fluctuation.

Visit to the lighthouse

Another symbolic and unique component of any trip to the Maspalomas beach is the iconic lighthouse. The decision to build a lighthouse in Maspalomas was taken in 1861. But it wasn’t until 1884 when the prodigious engineer Juan de León y Castillo, finally completed the construction plans. The work was completed in 1889, and the lighthouse became operational in 1890.

The tower measures 180 feet high, and its average diameter in the upper body is 20 feet. It is the third tallest lighthouse in Spain, after the Tower of Hercules in La Coruña and the Chipiona Lighthouse in Cádiz.

It is well worth ascending the stairs all the way to the top, as the views afforded from the viewing point on the tower’s summit are truly unforgettable. From up here, you can witness the beauty of your surroundings in all its magnificent glory. It truly is a sight to behold and not be missed.

After leaving the lighthouse, a visit to the Paseo de Meloneras is also highly recommended. If you time your trip well, you might well be lucky enough to make the walk from the lighthouse to the Paseo as the sun is setting, as this is the time of day when the scenery is at its most enchanting.

As the sun begins to set behind the mountain, the low angle of the sun basks you and your surrounding in a soft, lingering light, one which adds a truly spellbinding look to what is already a truly stunning landscape, The effect is heightened by the fact that the natural red-yellow of the beach and the dunes reflect the dying light of the sun.

After walking from the lighthouse to the Paseo, hopefully bathed in the light from one of the most gorgeous sunsets you’ll ever witness, you should be ready for a meal! Luckily, you’ll be in the right place! The paseo has an embarrassment of gastronomic riches on offer, so simply saunter the sun-soaked streets at your leisure and choose the place that looks most inviting!

That, I’m sure you’ll agree, has got to be the ideal way to end the perfect trip to the beach you’ve ever had.