In the United States, New Mexico is called “The Land of Enchantment.” But in Europe, that designation goes to the Dordogne region of France.

In the 21st century this region of France has managed to keep the things intact that are important in life: golden sunsets splashing across quaint ochre-colored buildings, the song of a gentle breeze whispering through poplar trees, dabbling your feet in crystal-clear waters, and excellent foods and wines to complement the lifestyle of the region.

The Romans named this vast 3,500-square-mile area Aquitaine in the first century B.C. Nestled between the northern Pyrenees, the Massif Central’s mountains and the Atlantic Ocean on the West, France’s third-largest region, with a population of less than half a million, waits to be re-discovered.

The Dordogne, with as many as 140 wine growers and wine establishments and 13 different appellations, has large tracts of forests, dramatic limestone cliffs, prehistoric caves with artistic inscriptions, picturesque medieval towns, a luxuriant countryside and as many as 1,500 chateaus.

THE LEGEND OF THE CHATEAUX

It’s said that when the Lord created France, he first dropped castles and chateaus in France’s Loire Valley, then walked a ways when His bag split open and out spilled hundreds of spiral-topped stone chateaus in the Dordogne.

Despite the beauty of the land, Dordogne so far has escaped prominence in the tourist industry, but that’s what makes it a special place: you don’t run into hordes of tourists crowding the pedestrian zones and clogging the backcountry roads. The locals are approachable and seem to enjoy having visitors who share their love for the land. 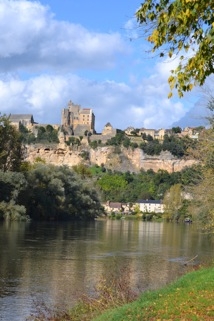 Chateau de Beynac, perched on a rocky spur overlooking the Dordogne River, served as the location for more than a dozen films.

The Dordogne, about an hour east of Bordeaux, beckons those who want to sample France’s abundant produce and superb wines, and see the multitude of ancient villages that seem right out of a movie set.

An exceptional region for castles and chateaus, the Dordogne offers tour groups numerous options for visits to these enchanting structures; 45 are open to the public. The Chateau des Milandes, built in 1489 by the Lord of Caumont for his wife, was purchased in 1947 by international singing star Josephine Baker, who used it to house 12 adopted children. Today, 14 furnished rooms are open for tours, as are the gardens, fountain and grounds with centuries-old magnolia trees.

Dominating the Valley of Vezere is Chateau et Jardins de Losse, situated between Lascaux Cave and Les Eyzies. Built between 1570 and 1576, it contains decor and furniture from the 16th and 17th centuries. Deep moats, a beautiful courtyard, and exquisite tapestries and paintings add to the allure of this place.

Another is the Chateau de Hautefort, overlooking the Auvezere Valley with two wings each terminating in a tower. The chateau, built in the middle of the 17th century, is surrounded by impressive French formal gardens. In 1998 the movie Ever After was filmed here with Drew Barrymore.

Breathing life into this region is the Dordogne River, a point of pride for residents and a source of relaxation and tourist development. Many villages began along the river, and it was the object of battles for control beginning in the 13th century.

Near Lascaux II, the 17th and 18 century Les Jardins du Manoir d’Eyrignac awaits visitors. These gardens with ornate hornbeam topiary provide a visual comparison with Versailles. Owned by the same family since the manor’s origin, the property has not changed much in five centuries.
The manor was built on the ruins of an ancient castle, and the gardens were brought back to life in 1965. Today these French gardens—featuring yews, cypresses, hornbeams, box and ivy plants—contain more than 300 topiary sculptures and 50,000 hedge plants.

Set against a golf course an hour east of Bordeaux, Chateau des Vigiers, a member of the Small Luxury Hotels of the World, is a place to relax and be pampered, Its 36 individual rooms and suites, or its 40 contemporary rooms will make groups feel welcome.

Dating back to 1587, the chateau forms the centerpiece of a 27-hole championship golf course. The hotel has a spa and outdoor heated swimming pool and offers its own award-winning wines.

TOWNS OF THE DORDOGNE 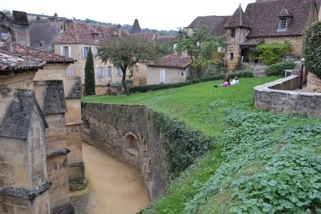 The medieval town of Sarlat developed around a Benedictine abbey.

Sarlat was founded in the 9th century and enjoyed great prosperity in the 13th and 14th centuries. After the Hundred Years War, however, the town was devastated and half of its buildings were rebuilt or repaired, including Sainte-Marie Church, Saint Sacerdos Cathedral and many private residences.

During the Renaissance many of Sarlat’s structures were made from a yellowish limestone, which lessened the chance of fire, and thus many of the historic structures stand to this day. The narrow cobblestone streets captivate visitors.

Sarlat developed around the large Benedictine Abbey of Carolingian. The town and the region have been featured in Hollywood films such as The Duellists (1978) and The Timeline (2003). Other movies have been partly shot in Sarlat as well. If you arrive on a Thursday or Saturday, you can visit the farmers’ market that takes place year-round at Sainte-Marie Church.

The medieval village of Beynac-et-Cazenac could be a Hollywood set or a Disney theme park, with Beynac Castle perched atop a hill overlooking the Dordogne River. Visitors will need to climb the steep steps to the top, where they have a commanding view of the peaceful valley below. The movie Joan of Arc was filmed the castle, which should be included on any tour agenda.

It’s said that Bergerac is a happy marriage between earth and water—earth because of the many wines grown there, and water for the Dordogne River that carried the wood for wine barrels and the wine down the river to market. Overhanging medieval half-timbered houses line the streets of the old section of town, and there are several town squares to explore, including the main one, Place Pelissiere, which slopes gently to the river. 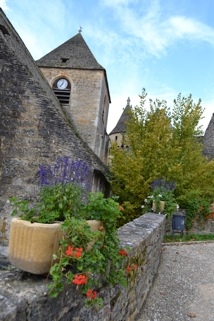 Situated in the tiny French village of Saint-Genies is the church of Notre-Dame-de-l’Assumption built in the 12th century.

At the Place Pelissiere is the ochre-colored stone Saint-Jacques Church, which formed part of the Saint Jacques de Compostella pilgrimage. Much of it was destroyed in the Wars of Religion (1562-1598), but its attractive bell tower and balcony are original.

Next to the church is one of Bergerac’s statues of Hercule-Savinien Cyrano de Bergerac, a French dramatist and duelist. In fictional works about his life he is featured with an overly large nose, which people would travel from miles around to see. At the top of the square on the Rue St. James there is a 14th century building that features some 26 odd sculptures set into its walls. A square nearby, the Place de la Mirpe, has another statue of Cyrano de Bergerac and lots of trees that provide shade in the summer. The market, held on a Saturday, is at the upper end of the town and sprawls over into the side streets. It is one of the largest and most colorful markets in the Dordogne.

In a 17th century wood-and-brick cloister, the Maison des Vins de Bergerac is a museum that helps explain the 13 wine appellations that surround Bergerac. With hands-on exhibits, films and a tasting room, this free museum takes visitors through the history of the vineyard using real and virtual images, a film and a sensory room where visitors can discover the aromas of wines from the region. Wine tasting is offered in the cellar.

In Les Eyzies a large limestone cliff envelops the back side of the town, and buildings are actually built into the rock face. Called the “World’s Prehistoric Capital,” it has numerous caves and prehistoric shelters that beg to be visited. A “Royal Road” follows the succession of caves and shelters between the river and the rocks.

In Issigeac, take a slow walk to view its 13th to 18th century buildings and houses. This town is not a museum, but a 21st century town where people live and work. You’ll be captivated by the Gallo-Roman villa which in the 12th century received papal protection. You can see the 17th century Bishops’ Castle, the House of Tithe with an imposing front, many timber-framed  and stone houses, the House of Heads (seen carved into the wood) and the Mushroom House, which gets larger as it goes up to allow for carts to negotiate the narrow medieval streets. 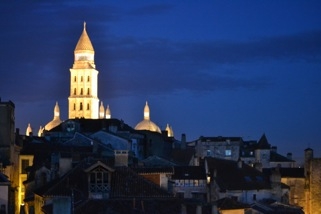 In Perigueux, capital of the Dordogne, the Cathedral is dedicated to Saint Front.

The capital city of the Dordogne, Perigueux, is a history book that opens back to Roman times, with many architectural remains, including a Gallo-Roman residence housed in a modern museum building designed by noted architect Jean Nouvel.
Narrow medieval streets lead through the historic district of town and toward the most prominent structure, the stone Byzantine-like Saint Front Cathedral built in the 12th century on the ruins of an abbey, which burned in 1120. Constructed in the shape of a cross, it’s one of the largest cathedrals in southern France, crowned by five lofty domes and many colonnaded turrets, with adjoining bell tower and cloisters from various centuries. Today the cathedral still attracts pilgrims on their way to Santiago de Compostela, Spain.

–Story and Photos by Don Heimburger