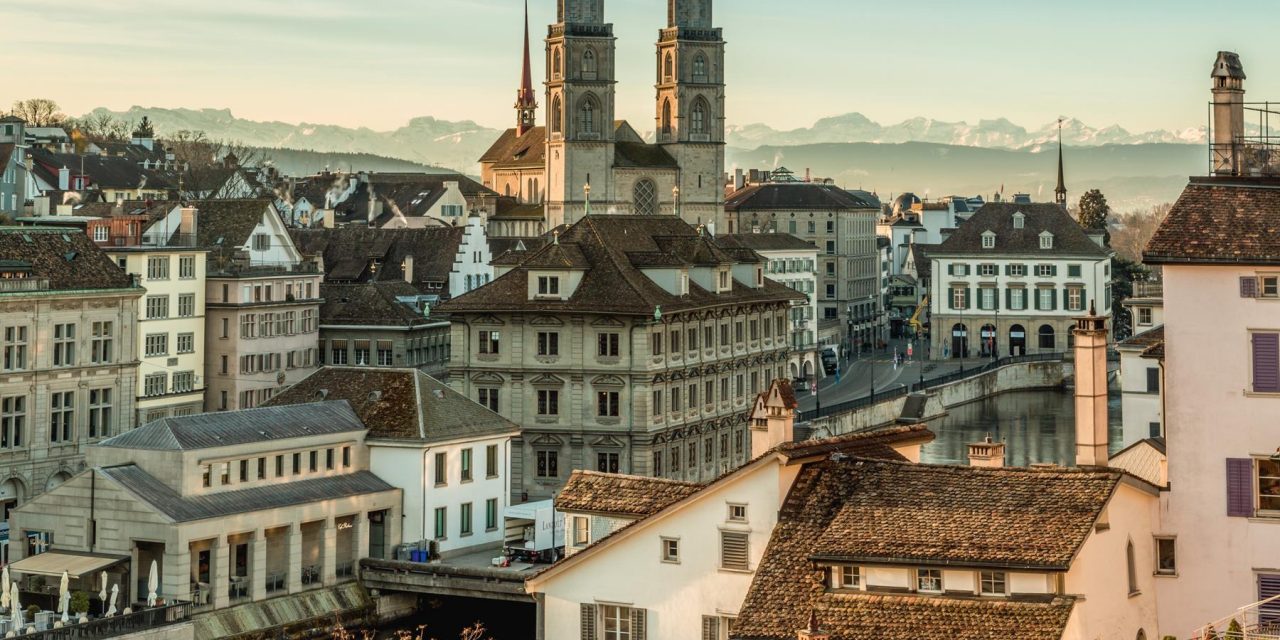 The city takes pride in its churches, museums and history

Switzerland’s largest city, with more than 400,000 inhabitants, is a magnet for thousands who flock to this international hub for business, pleasure and religious reasons. Located on the Limmat River and Lake Zurich, the city boasts large and influential financial, industrial and commercial sectors. Zurich is a hub for railways, highways and air traffic. Both Zurich’s airport and its railway station (called the Hauptbahnhof ) are the largest and busiest in the country. Numerous trains leave daily for France, Italy, Austria, Germany and beyond.

Founded by the Romans in 15 B.C., Zurich has been settled for more than 2,000 years, and even traces of civilization dating back 6,400 years have been found there. During the Middle Ages, Zurich gained the privileged status of imperial immediacy, which freed it from the authority of local lords and placed it under the authority of the emperor. In 1519 Zurich emerged as a primary center of the Protestant Reformation in Europe under the leadership of Huldrych Zwingli. 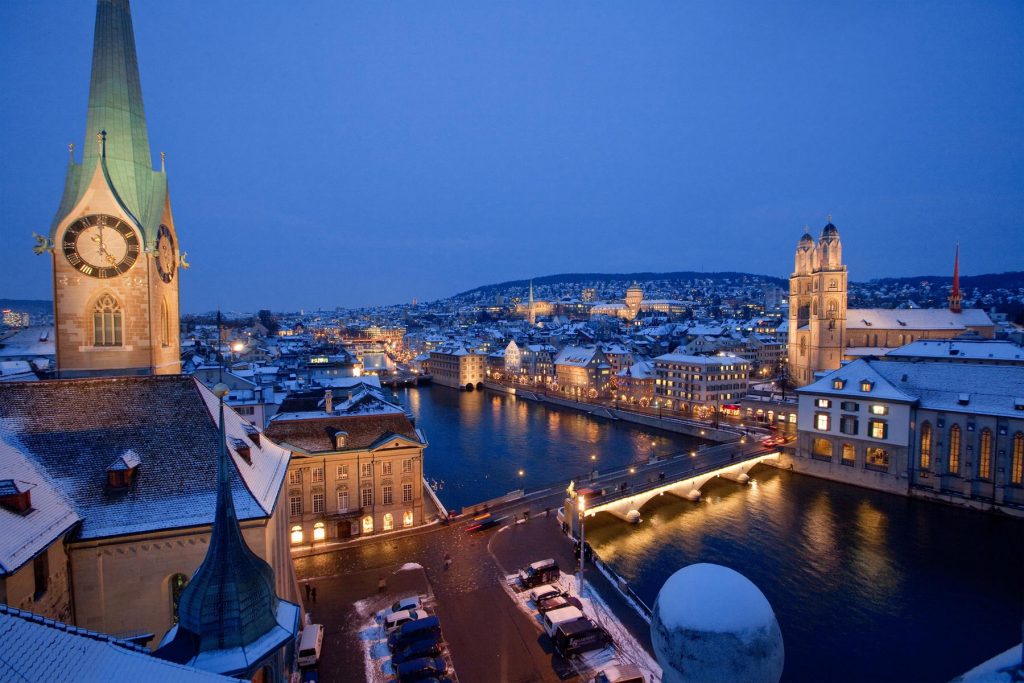 Zurich’s Old Town sits on the River Limmat along with the Grossmünster Cathedral and Fraumünster Church. – Zurich Tourism

Zwingli, one of several early church reformers, is regarded as the founder of Swiss Protestantism. In 1518 Zwingli’s growing influence secured for him the office of “people’s priest” at the Grossmünster (Great Cathedral) in Zurich. Many churches and monuments can be seen on guided tours that trace the trail of Christianity and the Reformation. Tours also highlight the importance of Heinrich Bullinger, the Protestant theologian responsible for sustaining the Reformation in Zurich. Bearing witness to the Reformation are several places where early church reformers lived or preached.

The Grossmünster, Fraumünster, Predigerkirche, Wasserkirche and St. Peter’s churches, all played important roles in the Reformation, and Zurich continues to celebrate the anniversary of 500 Years of the Reformation. The Grossmünster is said to have been founded by Charlemagne; legend says the church was built on the graves of the city’s patron saints, Felix and Regula. 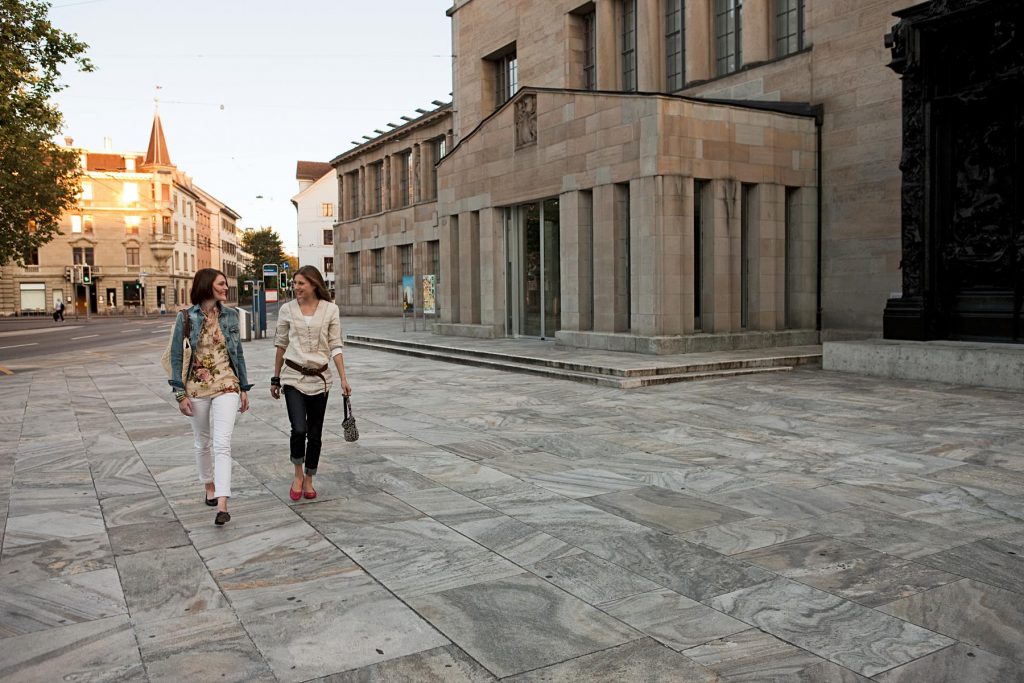 The Kunsthaus Zurich presents works dating from the 13th century to the present day. The ground-breaking temporary exhibitions are as prestigious as the museum’s superb collection of modern art. Copyright by Switzerland Tourism

To get around the city, the Zurich Card, available at the main train station or Zurich Airport, entitles users to free transportation, and offers a host of price reductions and even free admission to many museums and attractions, including the Swiss National Museum, Kunsthaus Zurich, Archaeological Collection of the University of Zurich, Kunsthalle Zurich for contemporary art and the Zurich Tram Museum. The Zurich Card also offers attractive discounts at selected stores and restaurants.

In 2019 and 2020, Zurich will be celebrating with special exhibits revolving around the theme “Art, Architecture, Culture and Design.” With its impressive list of art museums and collections, art galleries and art fairs, Zurich is internationally recognized as a leader in the field.

Shopping or simply walking the famous Bahnhofstrasse, one of Europe’s premier retail corridors, is a must-do. Each section of the city offers its own unique shopping experiences, from upscale to traditional stores in the Old Town to urban labels in trendy Zurich West. Fine chocolates, watches and jewelry top shoppers’ lists.

When in Zurich, be sure to “walk” Lake Zurich. The crescent-shaped lake curves past wooded peaks of the Pfannenstiel to the east and Albis mountain chain to the west. Take the scenic three-mile (4.8 km) promenade along the eastern shore within the Seefeld Quarters. From there you can see the Uetliberg mountain and boats crossing the lake. It’s a great excursion for the whole family. 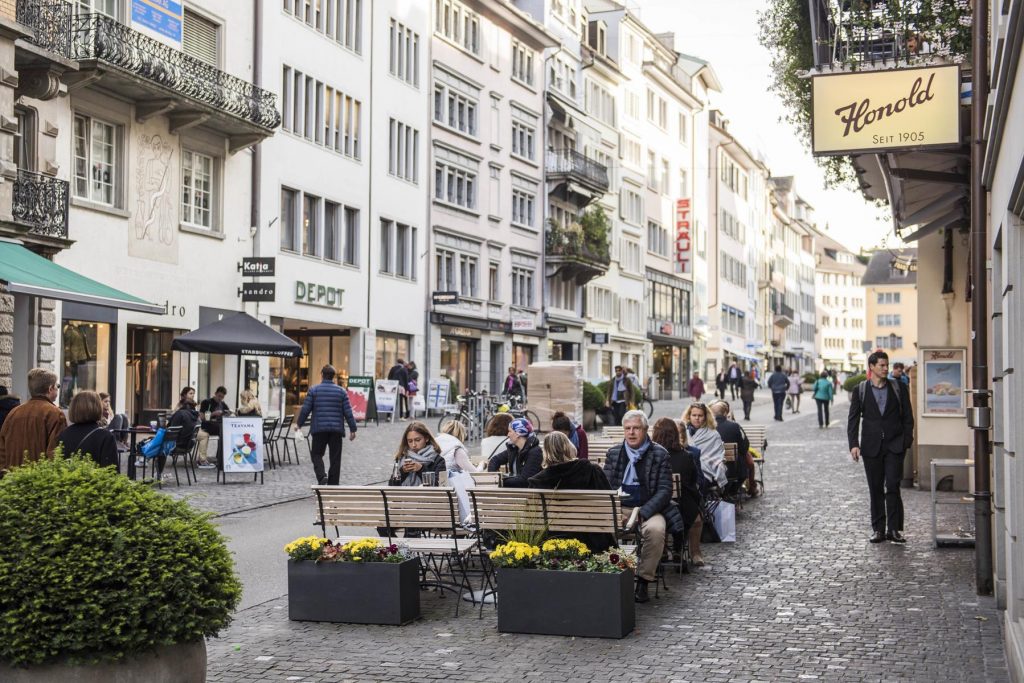 A bit hard to find but worth the trouble to locate is the Lindenhof, a bluff on the west bank of the Limmat River in the center of the city. Shaded by lime trees, the former site of a Roman fortress affords an unbroken view of Zurich’s oldest quarters on the east bank, allowing you to pick out landmarks like City Hall, Grossmünster Church and the University of Zurich. In 1798 Zurich’s citizens swore the oath to the Helvetic Constitution here.

Old Town is the honeypot for tourists, but if you’d like to tap into Zurich’s creative and stylish side, a former industrial zone called District 5 is the place to be. The showpiece in Zurich West is the Viadukt, a repurposed railway viaduct where the brick arches have been filled with stylish bars, restaurants and eclectic shops. Old factory buildings have been replaced with parks and leisure amenities like cinemas. Another symbol of the area’s renaissance is the Prime Tower, Switzerland’s second-tallest skyscraper.