In honor of the Civil War’s 150th anniversary, a five-year celebration that began last year, the state of Missouri is encouraging tourists to take a walk down its memory lane of historical attractions. The most northern state where slavery was permitted by law witnessed the greatest number of battles and engagements—more than 1,000—of any place except Virginia and Tennessee. 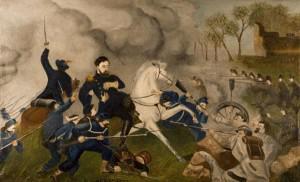 The Missouri History Museum in St. Louis is hosting The Civil War in Missouri, an exhibit that runs through March 16, 2013. It displays uniforms, weapons and images depicting pivotal moments and historical figures of the era. (civilwarmo.org)

At Jefferson Barracks’ Post Exchange Building, also in St. Louis, the Missouri Civil War Museum opens this year to commemorate the state’s role in the war. The barracks were a major medical center for Union troops wounded on the battlefront and in 1864 the assembly point for St. Louis’ defense during Confederate General Sterling Price’s raid. Monuments to both sides lie at Jefferson Barracks National Cemetery, where more than 12,000 Union and 1,000 Confederate soldiers are buried.

The domed Old Courthouse in downtown St. Louis is famous as the site of the Dred Scott Case, a trial that jump-started the Civil War. It was there in 1847 that an enslaved man named Dred Scott filed suit for the freedom of himself, his wife Harriet and their two daughters, winning in the pro-abolitionist environs of St. Louis, only to lose their case in the Missouri State Supreme Court and again in the U.S. Supreme Court. Re-enactments of the trial are performed throughout the year, and exhibits shed light on St. Louis during the Civil War.

Wilson Creek National Battlefield in Republic, near Springfield, memorializes an 1861 battle that saw the deaths of thousands of Confederates and Federals who fought to gain control of Missouri during the first year of the Civil War. Visitors can witness the battle sites and related artifacts. The visitor’s center has a film and museum that interpret the conflict.

Fort Davidson State Historic Site in Pilot Knob honors soldiers who died in the Battle of Fort Davidson (also called the Battle of Pilot Knob) in 1864, when the Confederates defeated the Union and obtained control of southwestern Missouri. While touring the grassy park, your group can view artifacts, Confederate gravesites and exhibits at the visitor’s center. A re-enactment of the battle is set for Sept. 27-28, 2014.

For more information on Civil War sites in Missouri, log on to mocivilwar.org.