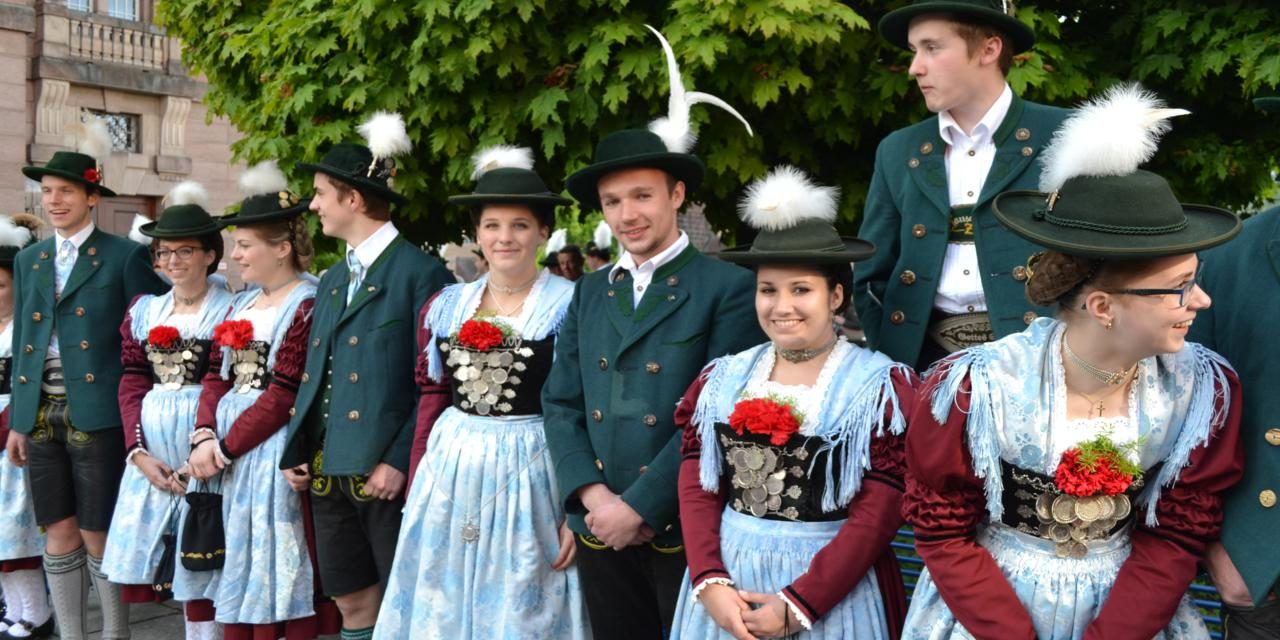 Nuremberg, Germany is known for its enormous, fun-filled Christmas Market, 14th century Gothic church and the imperial castle that towers above the city. It hosts numerous groups who delight in the wealth of attractions and savory foods.

Nuremberg was the site of the recent 2017 German Travel Mart (GTM), an annual three-day affair that attracts inbound tour operators and travel agents, journalists from around the world, and travel industry representatives of German federal states, regions and cities; castles; hotels and spas; and national parks and forests. Scores of delegates from the German National Tourist Board (GNTB) from GNTB offices all over the globe also attend.

The not-too-surprising fact is that Germany has achieved record tourism growth seven years in a row, with 80.8 million international overnight stays in 2016. This country with over two millennia of history took first place last year as a cultural destination for Europeans. It achieved second-place honors for the number of visitors it attracted worldwide during 2016. From the Americas, arrivals to Germany were up 3.9% last year, with global demand for tourism in Germany up 133% since 1993. One factor in the dramatic increases from the U.S. is that one in four Americans are of German heritage. 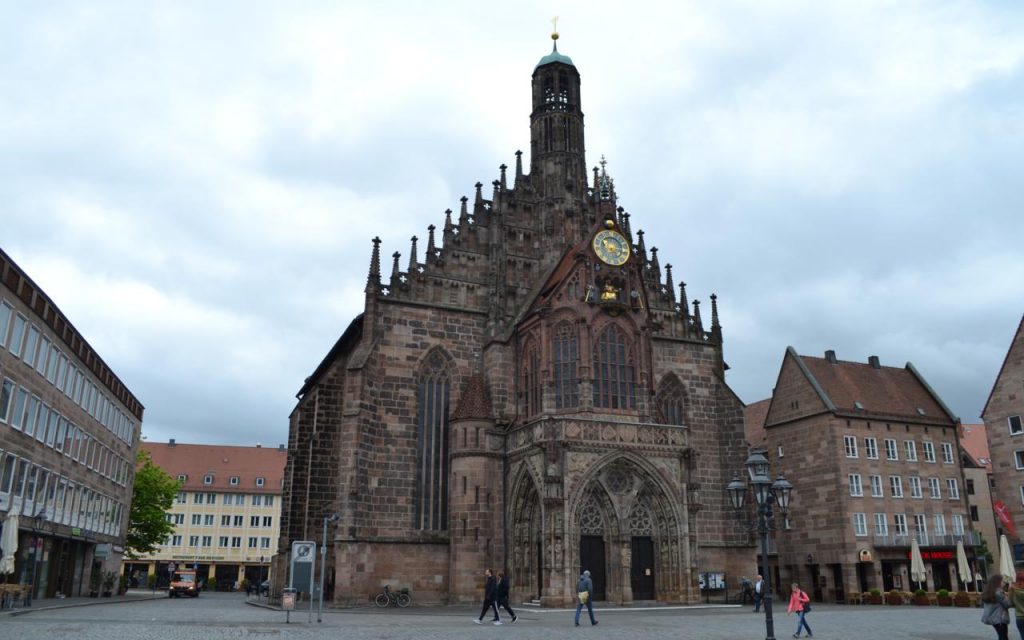 Nuremberg’s Gothic Frauenkirche, the Church of Our Lady, stands on one side of the huge market square. It was built between 1352 and 1362.
All photos by Don Heimburger.

These are intriguing figures when you realize that Germany is only 85% the size of California, and Texas is twice as large as Germany. Germany is a bit smaller than Japan.

The federal state of Bavaria claimed the most overnight stays in 2016, amounting to 17.5 million.

“Tradition, innovation and hospitality…it is these attributes that make the Free State (of Bavaria) so special and that make it Germany’s No. 1 region for tourists,” according to Jens Huwald, CEO of by.TM, one of the German Travel Mart hosts.

Nuremberg is Bavaria’s second largest metropolis, with about 3.6 million people, and is one of the state’s top tourist destinations. Martin Luther was to have once said, “Nuremberg shines throughout Germany like a sun among the moon and stars” and also said that with 21 printing houses at the time, Nuremberg was “Germany’s eye and ear.” Nuremberg provided substantial help in spreading Luther’s Reformation ideas in the 16th century. This is the final year of the Luther Decade, a 10-year-long celebration of Martin Luther’s nailing of the 95 Theses to the door of the Castle Church in Wittenberg. 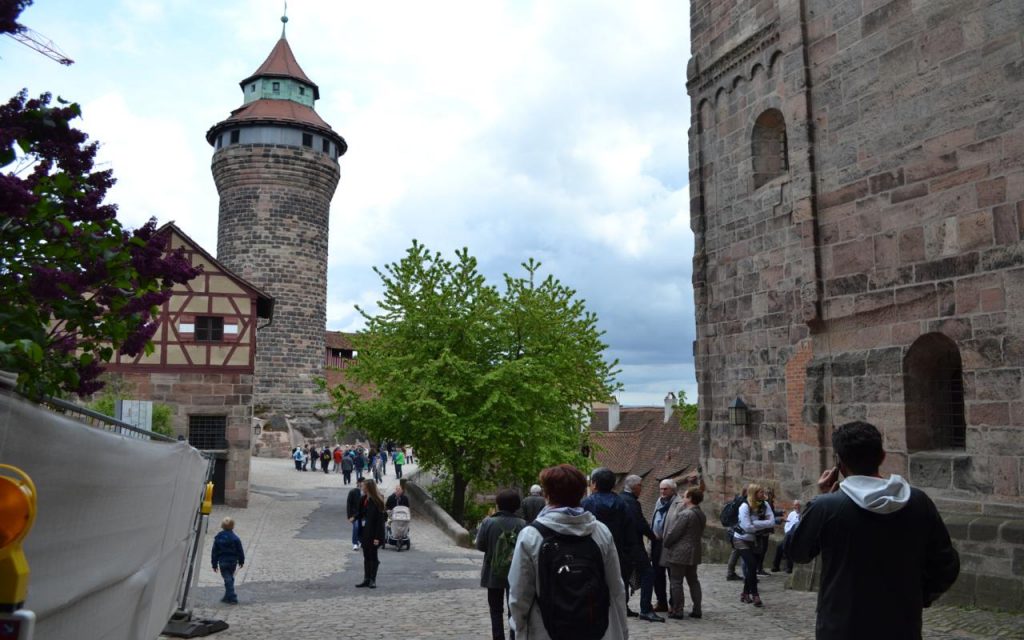 The Kaiserburg or Imperial Castle has been the symbol of Nuremberg’s power since the Middle Ages.

Kaiserburg. Nuremberg’s imperial castle is one of the city’s top attractions. First mentioned in a document as a “royal property” as early as 1050, the castle, located on a sandstone ridge, played an important role in the imperial and domestic policies of the Salian and Hohenstaufen kings and emperors. Nuremberg and its castle were stopping-off points for rulers on their journeys through the realm, and court assemblies and Imperial Diets were held there. Some emperors paid numerous visits: Ludwig IV (“the Bavarian”) stayed there 74 times, Charles IV 52 times.

By the late Middle Ages, Nuremberg ranked as the “most distinguished, best located city of the realm.” Today, thousands gather weekly to walk up the hill to the castle and inspect its thick walls, ornate rooms and tall towers. After the war in 1945, it was rebuilt almost exactly as it had been before the conflict.

At the beginning of Advent, Nuremberg becomes the Christmas capital of Germany, with hundreds of vendor stalls filling the Marktplatz, selling hot, mulled wine; potato pancakes with applesauce, roasted almonds, candies of all descriptions, the city’s famous sweet and spicy gingerbread, and its sizzling Nürnberger bratwurst, with a billion produced every year. 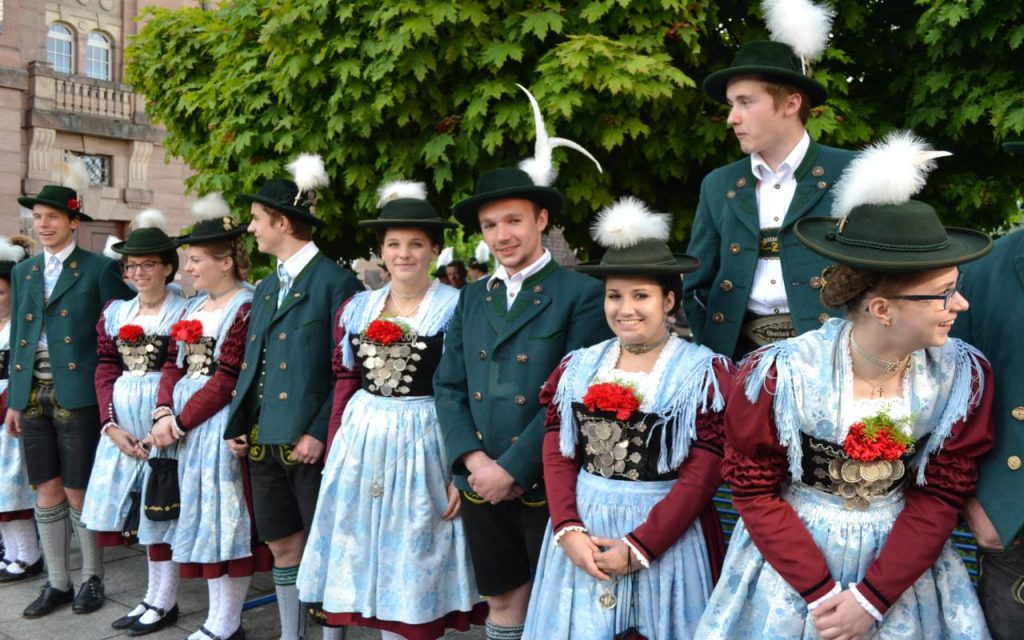 Traditional Bavarian costumes are worn for special occasions in Nuremberg.

The Nuremberg Christkind, with her white and gold dress, long blond curls and golden crown, has been the symbol of the Christmas Market for many decades. In fact, the event – called the Christkindlesmarkt – is named for her.

Three holiday markets actually are held in Nuremberg – the large Christmas market in front of the Frauenkirche, another Sister Cities international market held about a block away, and the third, a Kinderweihnachtmarket held down the street, complete with colorful, fun rides for kids.

By the 19th century, Nuremberg had become a powerhouse in Germany’s industrial revolution. The Deutsche Bahn Museum on Lessingstrasse in the city center, a couple of blocks from the main train station, shows this might in the form of rail technology. Every year more than 200,000 visitors from around the world descend on the museum’s exhibition centers (it has three), to view up to 40 railway cars and locomotives.

The museum covers 73,000 square feet, and features a replica of the Adler, the first steam engine in Germany, the salon coach of Bavarian King Ludwig II, a five-inch-gauge railway in the kid’s section of the museum and large collections of detailed model trains. The museum welcomes tour groups. 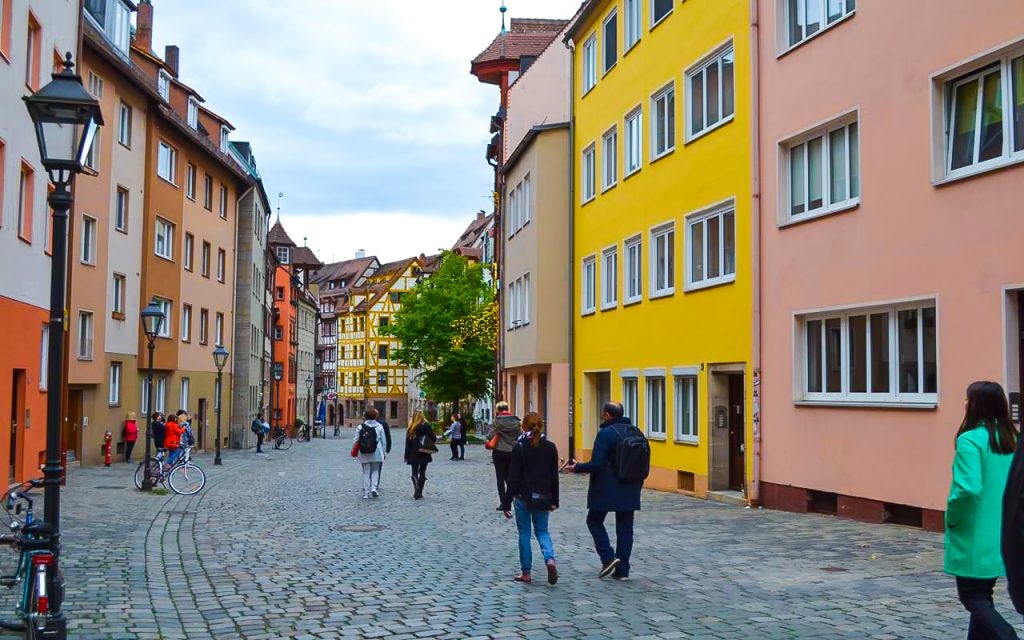 Colorful residential houses and old cobblestone streets are a hallmark of the older sections of Nuremberg.

At the Kaiserburg Museum, visitors get an unadulterated view of the architectural history of the castle, and numerous displays of the development of weaponry in the Middle Ages. At the half-timbered Albrecht Dürer House, you’ll see the living quarters and kitchen of this Renaissance painter-printmaker-theorist who was patronized by Maximilian I and is considered Germany’s most famous artist. In addition, there’s a large workshop complete with functioning printing equipment; it’s the only surviving 15th century artist’s house in northern Europe.

Other highlights of Nuremberg include the Toy Museum in the heart of the Old Town where exceptional displays showcase 600 years of toy-making in the city. Dolls, tin figurines, games, wooden toys and more take center stage at this delightful museum. St. Sebald, Nuremberg’s oldest city parish, dates to the 13th century and contains the bones of patron saint Sebaldus; Albrecht Dürer was baptized and married there. 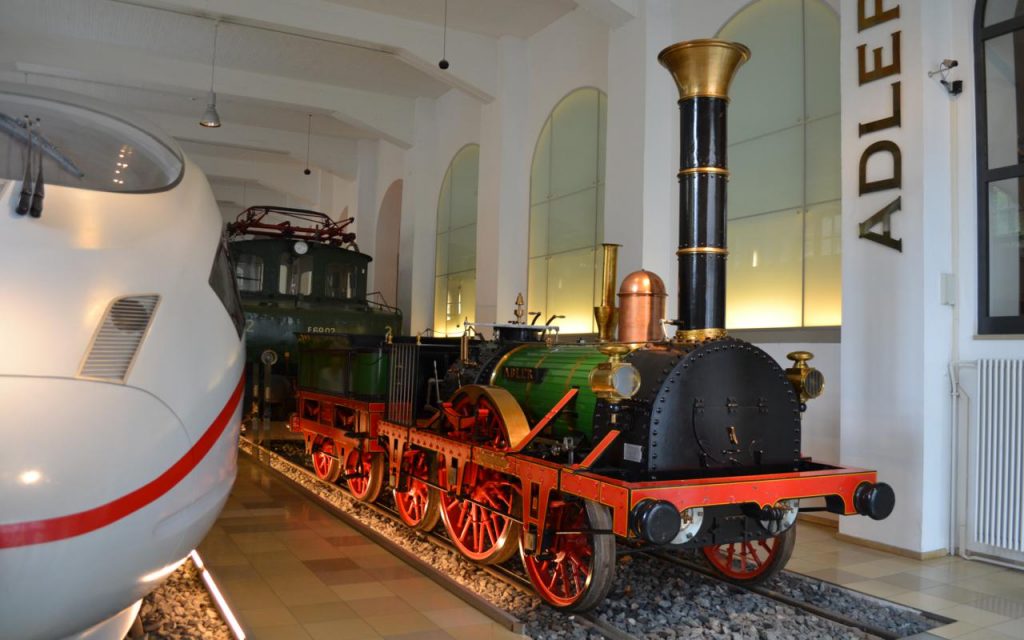 A replica of the Adler steam locomotive sits beside an ICE train in the Deutsche Bahn Museum on Lessingstrasse.

The Germanisches National Museum, founded in 1852, is the largest cultural history museum in Germany with 1.3 million objects. The museum features 20,000 exhibits covering a span of some 3,000 years dating from prehistoric to modern times. You can also find an important collection of musical instruments from Europe, plus masterpieces by Dürer, Cranach and Rembrandt.

In Nuremberg you’ll always find an abundance of Gemütlichkeit, or warmth, which is particularly evident in its inns, pubs and beer gardens. It’s there where you can taste Nuremberg’s culinary delights. Pork shoulder, carp, white asparagus and horseradish are some of the specialties of the city.

For more information about Nuremberg, go to tourismus.nuernberg.de/en/ or www.germany.travel