From city churches to gems tucked away in the countryside, North Central Alabama is blessed with powerful faith-based attractions that fit well into religious group itineraries. Some of the sites are of national, even international, significance. A number have special appeal for Catholic travelers. 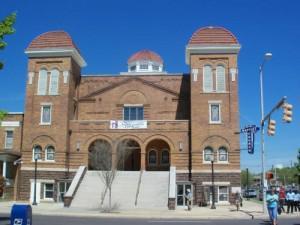 Sixteenth Street Baptist Church looms prominently in the Civil Rights District on the edge of downtown Birmingham. It became forever etched in American history on Sept. 15, 1963, when a bombing killed four black girls changing into their choir robes in the church basement. Perpetrated by Klansmen, the crime was a turning point in the nation’s civil rights movement, shocking the world and generating widespread sympathy for the cause.

Exhibits in the church describe the horrific crime that buried the girls in rubble; another girl lost an eye and more than 20 other people were injured. Built in 1909 and recently designated a National Historic Landmark, the brick church had been an epicenter of the 1960s civil rights movement. It is open for tours and welcomes visitors to Sunday services. “Angels of Change,” a video shown in the sanctuary, depicts the bombing, aftermath and prosecution of the criminals years later. At the back of the sanctuary is the stained-glass Wales Window, a memorial gift of a black crucified Christ from the people of Wales.

Sixteenth Street Baptist is across the street from the Civil Rights Institute and Kelly Ingram Park, the staging ground of demonstrations against segregation. When the park was renovated in 1992, several civil rights-related statues and sculptures were installed, including a statue of Martin Luther King, which faces the church. A sculpture along the park’s Freedom Walk shows three ministers kneeling in prayer in the midst of a march where they were met by police dogs and billy clubs. One of the figures is A.D. King, brother of MLK. Other sculptures depict teens in jail (many marchers were high school students) and ferocious police dogs that seem to jump out at passersby.

The Cathedral of St. Paul, built in 1893 to serve Irish and Italian immigrants, is another downtown Birmingham landmark. Visitors stand in awe of its soaring octagonal twin towers, vaulted Gothic-style ceiling, stained-glass windows and massive altar. 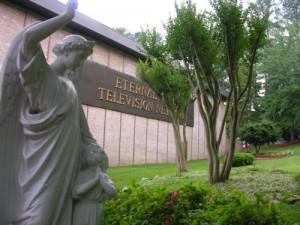 In Irondale, just outside of Birmingham, groups can tour the studios of Eternal Word Television Network (EWTN) and take a peek at the chapel seen by Catholic viewers around the world. You might even get to watch the taping of a show.

What began in 1981 in a garage-turned-studio on the grounds of a monastery is today a global network that broadcasts 24 hours a day in English, Spanish, French and German to 140 countries and territories. Cable TV viewers are familiar with Mother Angelica, the force behind EWTN. As the result of a stroke, the 88-year-old founder no longer appears live, but tapings of her wit and wisdom still grace the airwaves.

Originally from Ohio, Mother Angelica vowed to God that she would start a monastery in the Deep South if she recovered from a serious illness. After a miraculous healing, she moved to Alabama and with a few nuns founded a monastery at the site of today’s studios. Though she had no experience in broadcasting, Mother Angelica did have dreams and became known around the country for her devotional writings and videos. In an appearance at a TV studio in Chicago, she expressed her determination: “I have to have one of these (a TV studio).” 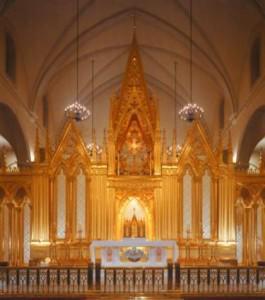 Mother Angelica’s persistence has resulted not only in the viewer-supported network but in an impressive religious site about an hour from Birmingham. In Hanceville, pilgrimage groups find inspiration at Our Lady of Angels Monastery Farm, where a massive church, modeled after the cathedral in Siena, Italy, enthralls travelers of all faiths.

Mother Angelica’s goal was to restore the sense of awe generated by the magnificent cathedrals of 13th century Europe. “When we have awe,” she said, “we are inspired to look at God, not man.”

Called the Shrine of the Most Blessed Sacrament, the church features a vaulted, Gothic ceiling, rock walls, white marble floors and columns, and handcrafted German stained-glass windows, plus a brick bell tower and spacious plaza. No expense was spared. (Five anonymous families donated an estimated $54 million to build the church, which was completed in 1999.) A 15-foot-tall, Spanish hand-carved wooden wall separates the public from the cloistered nuns during services in the 200-seat chapel, which is seen on EWTN broadcasts. The Poor Clare Nuns of Perpetual Adoration keep a constant prayer vigil before the Blessed Sacrament. (Our Lady of Angels Monastery, originally established at the EWTN site in Irondale, is now at the farm; you will see Franciscan friars on the former monastery campus, and one probably will be your guide at the TV studios.)

In the crypt, or lower church, are white marble burial vaults for 28 nuns. Mother Angelica will be interred there. At the entrance to the lower church, the Meditation Room of the Passion has exhibit cases with a crown of thorns, whips, nails and computer images of the Shroud of Turin (in which Jesus’ body was wrapped).

Across the plaza are a medieval-style castle and a chapel with a life-like Nativity scene. Adorning the castle interior are coats of arms, suits of armor, tapestries and wooden tables 400 and 800 years old. Carved wooden doors and ceilings also take visitors back to the Middle Ages, as do centuries-old, hand-written Bible pages on display. 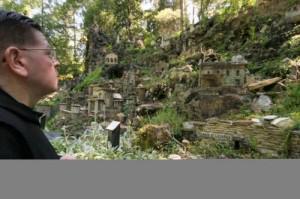 In Cullman, a short drive from the Shrine of the Blessed Sacrament, groups can continue their pilgrimage at Ave Maria Grotto, a popular attraction on the grounds of Saint Bernard Abbey, the only Benedictine monastery of men in Alabama. Flanking a path on a landscaped hillside are 125 small stone and cement structures that depict famous buildings and Christian shrines around the world. They are the handiwork of Brother Joseph Zoetl, a monk at the abbey for almost 70 years.

Brother Joseph, who worked at the abbey’s power plant shoveling coal into the furnace, found time to construct miniature versions of landmarks in Bethlehem and Jerusalem, churches like St. Peter’s in Rome, the Leaning Tower of Pisa (the bell tower of the Cathedral of Pisa, Italy), the Alamo (a Spanish mission church) and Statue of Liberty. His last creation, the Lourdes Shrine, was completed in 1958, three years before he died at the age of 83. He had visited only six of the places he constructed. Besides cement and stone, Joseph used marbles, glass, ceramic tile, costume jewelry, seashells and other material he received from people intrigued with his hobby.

The grotto itself, a cave-like structure that Joseph decorated with stalactites, features a statue of the Virgin Mary holding baby Jesus. It measures 27 feet high, 27 feet wide and 27 feet deep.

Visitors to Saint Bernard Abbey are invited to attend Mass with the monks, who gather in its church four times daily. The wooded campus, which also is home to Saint Bernard Prep School, accommodates groups in its retreat and conference center, which has meeting rooms, dining and recreational facilities, and 45 guest rooms.