All Aboard for Station Square, Pittsburgh

One of the best things about my recent trip to Pittsburgh was having a welcoming place to unwind after a busy day of touring. That place was the Sheraton Station Square Hotel, the centerpiece of a tourist-friendly commercial area tucked between the Monongahela River and rocky walls of Mt. Washington, an easy walk across the Smithfield Street Bridge to the heart of downtown.

Station Square, a 52-acre dining, shopping, entertainment and office complex, occupies the old Pittsburgh & Lake Erie train station and rail yard. Even today trains speeding past both sides of Station Square–on tracks along the riverfront and in the shadows of Mt. Washington–are reminders of Pittsburgh’s rail heritage. You’ll see or hear trains all the time. From your hotel window or along the riverfront promenade, you’ll gaze at boat traffic as well. Rooms that face downtown offer views of skyscrapers and Pittsburgh’s famous bridges, with city lights dappling the water at night. 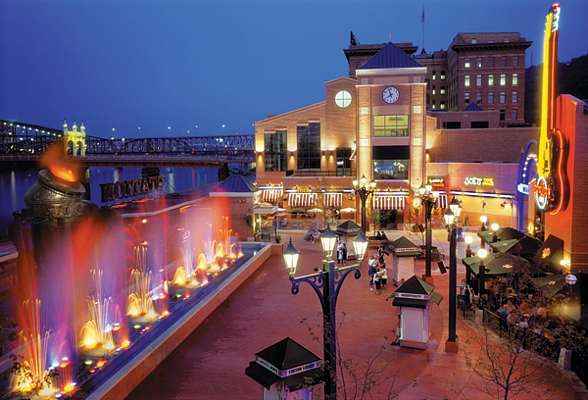 The 399-room Sheraton, under new ownership, is undergoing a $15-million renovation set for completion this summer, with guest rooms and public areas gleaming from a facelift. Pittsburgh’s only waterfront hotel was built in 1981 and added a wing in 2001. In keeping with its railroad theme, black steel ceiling trusses in the atrium lobby mirror a train shed and the ironwork of nearby bridges. The lobby restaurant, Trackside, looks out on the skyline. Also on the main level are a fitness center and indoor pool. The parking lot has plenty of room for motorcoaches.

Guest room amenities include a refrigerator, coffee and tea maker, safe and complimentary wireless high-speed internet access. Some rooms overlook the atrium, while others have views of the river or Mt. Washington, a lofty bluff crowned with houses, apartment buildings and churches that seem to be balancing precariously on the hilltops.

To reach the top of Mt. Washington the classic way, take a ride on one of Pittsburgh’s famous funiculars, or inclines. The well-preserved Monongahela and Duquesne Inclines have been transporting people since the 1870s. The former, operated by the Port Authority of Allegheny County, is right across the street from Station Square. The latter, operated by a private preservation society, is a 10-minute walk from the hotel. These inclines, the only remaining ones of the original 19 in Pittsburgh, go up and down the steep bluff every day ($2.50 one way). They should be on anyone’s must-do list.

Station Square itself offers a lot for the Pittsburgh sightseer, as its marina is the launching site of the Gateway Clipper Fleet’s excursion boats and Just Ducky land-and-water tours. 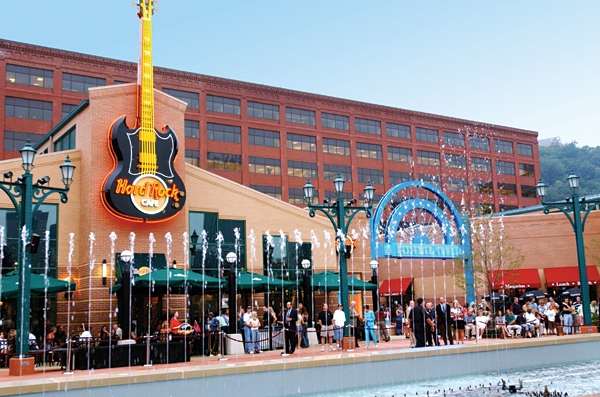 Two other tour companies, Segways in Paradise and Molly’s Trolleys, are based in Station Square’s shopping mall, a collection of 20-plus retailers inside the restored 1897 Freight House. The railroad-themed mall features shops specializing in everything from cigars to Irish gifts to Pittsburgh sports merchandise. It also has a small food court and a few restaurants and bars. Among the nationally known eateries in the mall and across the brick street are Hard Rock Cafe, Joe’s Crab Shack, Houlihan’s, Texas de Brazil, The Melting Pot and Buca di Beppo.

To dine in a grand, one-of-a-kind setting, consider the Grand Concourse. Located in the waiting room of the 1901 Pittsburgh & Lake Erie terminal, it offers a gracious experience under a stained-glass, barrel-vaulted ceiling. In equally historic surroundings is the adjacent Gandy Dancer Saloon.

At the heart of Station Square, next to the river, sits the Fountain at Bessemer Court. This state-of-the-art Waltzing Waters® Liquid Fireworks® Show features hundreds of multi-colored water jets soaring up to 40 feet in the air, choreographed to music. Operating from April to November, it offers shows from 9 a.m. to midnight.