Far removed from the peaceful countryside surrounding the Sea of Galilee, Israel’s most populous urban area mounts an assault on the senses.

Indeed, the tempo of life in Tel Aviv jolts the casual visitor who has been to the Galilee and even Jerusalem, itself a big city.

Electrifying, brash and cosmopolitan, this high-rise metropolis on the Mediterranean ensured that our week-long Israel FAM trip went out with a bang. There wasn’t much biblical about it. 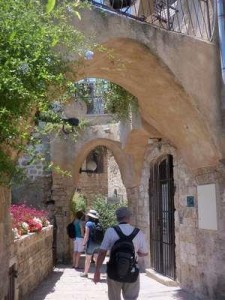 You don’t come to Tel Aviv primarily to visit sacred shrines, Christian, Jewish or Muslim. In fact, the city couldn’t be more secular. Though 95 percent of the residents are Jews, only a small percentage is religious. Walking down the street, you see few Orthodox Jews, typified by the men in beards, side curls, and black hats and coats. In Jerusalem they’re a common sight. One city is holy, the other hedonistic.

What you do find in the “New York” of Israel is rampart commercial activity and a cutting-edge cultural scene, complete with nightclubs, sidewalk cafes, theater offerings, art exhibitions and a thriving gay community. The streets are clogged with traffic, so it’s a lot more fun being a pedestrian than stuck in a car, taxi or bus. Tel Aviv is the essence of modern Israel.

Our group stayed at the 30-room Brown TLV, a hip little hotel in the middle of all the chaos outside its doors. A five-story, converted bank building painted brown, it offered us all kinds of amenities. In the living room-style lobby, for example, were open bottles of chilled champagne, and I really went for the cookies next to the coffee maker. A vintage refrigerator was stocked with cold drinks. With a floor-to-ceiling bookshelf, the brown-and-gold lobby had a laid-back library feel. In back was a small, artificial-grass patio with tables. The rooftop terrace, besides offering panoramic views, had lounge beds (for napping, sunning and star-gazing) and even outdoor showers and a bath tub. These public spaces are really key because the guest rooms at the Brown are more than cozy—they’re teeny.

Because our stay in Tel Aviv was brief, I didn’t get a full handle on the city but felt like our boutique hotel was right in the heart of things, much within walking distance. Rather than taking a nap or lolling about the lobby sipping champagne, I headed out to explore the neighborhood soon after our late afternoon check-in. My destination: the beach. 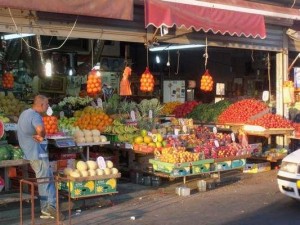 The long public beach that fringes Tel Aviv’s Mediterranean coastline turned out to be only eight blocks from my hotel. As soon as I made it to the beachfront promenade, I felt that I had left the grit, grime and concrete and stumbled onto a resort. The breezy, palm-lined strand, with men playing paddle ball and groups drinking beer at umbrella tables, sure takes the edge off the urban frenzy. On the way back from the beach I stopped at the Carmel Market, Tel Aviv’s famous open-air emporium, just as shopkeepers were closing up. But I knew I would be back there with our group the next day. 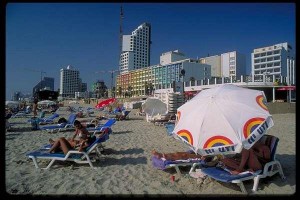 I also made it back to the waterfront the next day, this time traveling by bike, thanks to another Brown Hotel amenity—a fleet of bicycles free for guests. Before 7:30 a.m. another group member and I were out pedaling through awakening streets on our way to the seashore bike trail, taking it south to the port area of Old Jaffa, which our group would tour later that morning.

After a one-hour ride, we came back to shower and then went out for breakfast, choosing Cafe Birenbaum, one of the three neighborhood cafes that provide Brown Hotel guests with their included breakfast. Sitting at a sidewalk table on a narrow, relatively quiet street, we enjoyed eggs, breads with carrot marmalade and other homemade jams, and Arab salad (cucumber, tomato, parsley, onion). The spread also included olives and labneh, a sour cream-like spread. The homey cafe, near the Nahalat Binyamin pedestrian mall, has been run by two sisters since 1962. Brown TLV guests also can have breakfast at the trendy Espresso-Bar Rothschild at the corner of bustling Rothschild Boulevard and Herzl Street.

Rothschild Boulevard, perfect for people-watching, hums with a youthful vibe and abounds with sidewalk cafes, coffeehouses, wine bars and smart restaurants. There’s a McDonald’s, too. One night our gang had dinner at the Brewhouse, a microbrewery where a blues group was performing. All the men in our group ordered the medley of sausages to go with our beer. Other entrees included kebabs, spareribs and salmon in miso sauce. 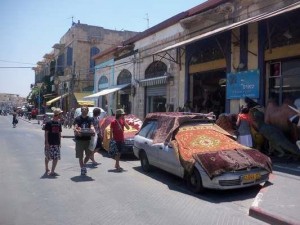 Jaffa is the ancient seaport that existed long before there was a Tel Aviv. (The two cities officially became one in 1950.) Known for its stone buildings and Arabic arches, church steeples and mosque minarets, the old quarter, traditionally an Arab neighborhood, has been gentrified in recent years. The cobbled lanes are now lined with art galleries, shops and restaurants. Kedumin Square, the central plaza, is home to St. Peter’s, a century-old Franciscan church. East of Old Jaffa, don’t miss the Jaffa Flea Market—it and the surrounding streets typify a Middle Eastern bazaar.

After lunch we headed to the raucous Carmel Market, where scrappy merchants peddle produce, souvenirs, cheap clothes and tasty street eats. We had an hour or so to wander through the stalls, most of them lit by dangling bare bulbs. Since it was Tuesday, we also had a chance to browse the arts and crafts market, just steps away on pedestrian Nahalat Binyamin Street. Also held on Fridays, the market sells everything from jewelry and ceramics to leather goods, Judaica and framed photographs.

We ended our day at HaTachana, a new shopping complex that has risen from the once-decaying Jaffa-Jerusalem railway station, not far from the sea. Outside the fashion boutiques and trendy restaurants, most of them in restored buildings, are renovated rail cars and train tracks. I later discovered that HaTachana (“The Station” in Hebrew) was within walking distance of my hotel. Actually, Jaffa wasn’t that long a hike either.

I easily could have stayed an extra few days in Tel Aviv. I was just getting comfortable when it was time to head to the Ben Gurion Airport for the El Al flight home.