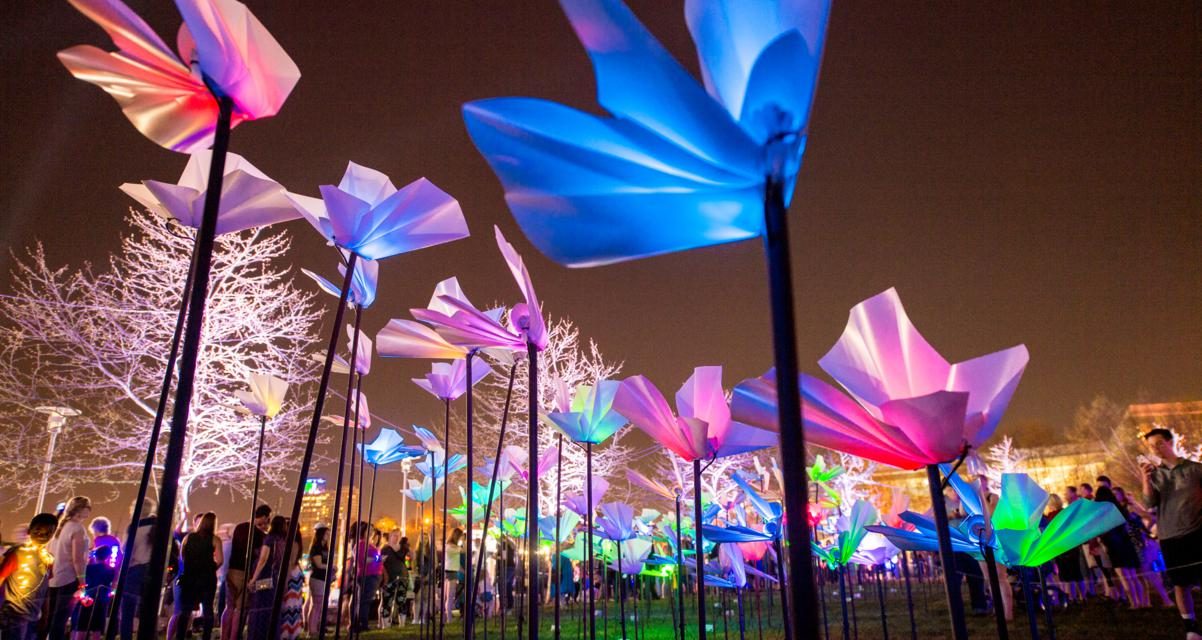 Build your itinerary around one of these festive events

There are plenty of attractions and events to fill a Baltimore itinerary during race week, but the action at the track begins Thursday. The Preakness Alibi Breakfast began in the late 1930s at the Pimlico Clubhouse with just a cup of coffee among horsemen.Today, it’s grown to a full breakfast with media, owners, and jockeys in attendance. Friday is Black-eyed Susan Day, with a full day of racing showing off the best fillies in the nation in the center jewel of the Filly Triple Crown. It’s the ultimate girls getaway. Saturday’s Preakness Stakes is the featured event and second race in the Triple Crown, with attendance exceeding 140,000. (preakness.com) 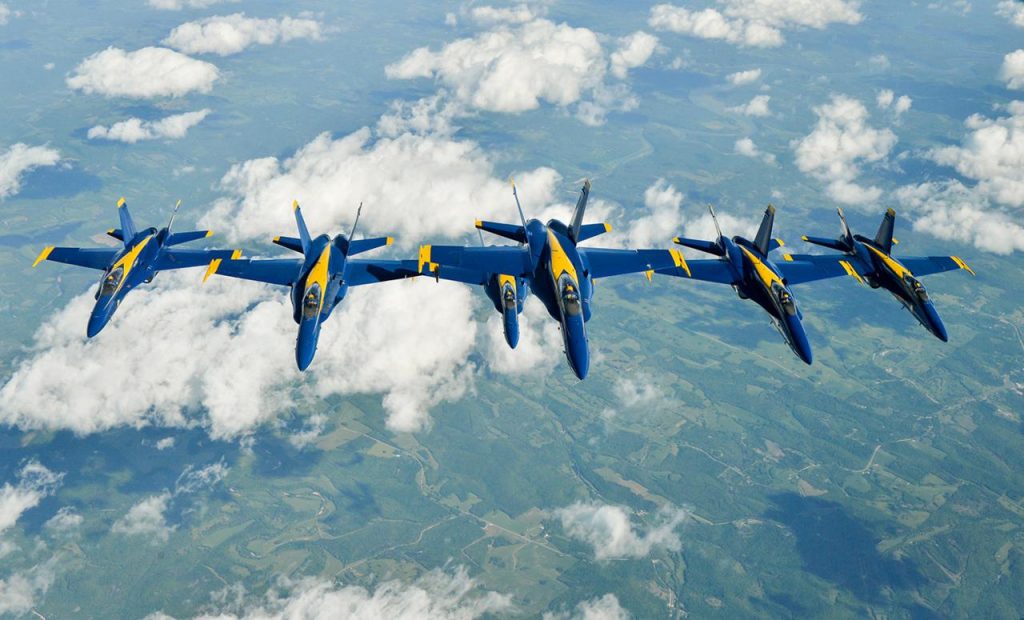 The U.S. Navy Blue Angels will headline the 12th Annual Ocean City (OC) Air Show. The team’s C-130, known as Fat Albert, along with a variety of military and civilian aircraft, can be expected. The Blue Angels, officially the United States Navy Flight Demonstration Squadron, showcase the pride and professionalism of the U.S. Navy and Marine Corps. Their performances exhibit the flying skills that all naval pilots possess.
Following Fat Albert the six F/A-18 Hornets soar in from behind the crowd in their four-jet diamond formation, with two jets flying solo maneuvers. Towards the end of the program the solo jets join, creating a six-jet Delta formation. In both the diamond and delta formations, wing tips are only three feet apart!

The OC Air Show has become the traditional way to kick off Ocean City’s summer season. Tickets are on sale now for groups of 10 or more. Many Ocean City hotels are offering group packages for the event.
(ocairshow.com)

For more than a decade this barbecue themed street festival has grown to become one of the largest, most fun and most anticipated events in the metropolitan Baltimore Region. On the serious side more than 50
teams from the Mid-Atlantic area travel to Bel Air to compete for a generous cash prize and a chance to continue at the Annual Jack Daniel’s World Championship Invitational Barbeque in Lynchburg, Tennessee and The American Royal in Kansas City, Missouri. In addition to those professionals, more than 40 amateur teams will compete in the MD State BBQ Bash Tailgate Challenge. Although tailgating is a logical place for BBQ skills and one required at every college football game, the best ribs among the amateurs will win some cash, prizes and a lot of bragging rights.

The entertainment begins early Friday evening and again Saturday midday through the evening. Every year concludes with a concert by a nationally known Nashville recording artist. More than 50 crafters join the action for both days. Friday evening is the exclusive Roll Out the Barrel premium bourbon and cigar tasting and catered dinner. Although there is a charge for the Roll Out the Barrel event, the remainder of the festival is free. (belairmaryland.org/md-bbq-bash)

Next year’s National Folk Festival will mark the second of three visits to host city Salisbury on Maryland’s Eastern Shore. The National Council for the Traditional Arts was founded in 1934, and the 2019 festival will celebrate its 79th year. More than 350 artists, including musicians and craftsmen, are expected. The
National has celebrated the roots, richness and wide variety of American culture since its first St. Louis event in 1934. The tradition of a three-year stay in a host city is intended to provide the beginning of an ongoing, sustainable festival for the community.

Seven stages will provide continuous music and dance, craft exhibits and demonstrations at Salisbury’s Downtown Plaza. Musicians from across the country bring their styles of traditional music, from gospel to reggae and blues to Western swing. Music with roots in Romania, Peru, Korea, Canada and many other
countries also can be heard. Dance, puppetry and a parade round out the offerings. The Festival Food Court has more than two dozen options, from snacks to the best regional and ethnic foods. Numerous eateries are within walking distance of the National. While the National is a free festival, donations are accepted and appreciated. A motorcoach drop-off/pick-up is at the north end of the grounds. (nationalfolkfestival.com)

This five-day festival celebrates autumn and the beauty of Western Maryland. It may be an understatement to say this event is well recognized. In 2007, MSN.com listed it tops among fall festivals in the world. Good
Housekeeping listed Oakland, Maryland among the “Top 50 Small Towns with the Best Fall Foliage.” In 2014 Travel & Leisure followed suit by listing Oakland as “America’s Best Town for Fall Colors.”

The festival had its humble beginnings more than a decade before its inception when a group of area turkey growers organized and promoted turkey dinners. People from Pennsylvania, New Jersey, Washington, D.C., West Virginia, Virginia, Ohio and Maryland traveled to Garrett County for the on-again, off-again event.

Illuminating Baltimore with literatures and ideas during the day and world-class light art and performances at night, the Baltimore Office of Promotion & The Arts (BOPA) is uniting two of its marquee events—Baltimore Book Festival and Light City—to create a 10-day international event at the Inner Harbor. Moving the festivals to November is being done to coincide with the end of daylight savings time to provide visitors with a greater opportunity to view the light art installations earlier in the evening and to engage more authors as most new books are being released in mid-autumn by publishers.

Music is an important part of Light City, with two stages featuring local and regional bands, DJs and musicians from all genres. Along with the main stages, Pop-Up Performances are interactive and bound to pop up anywhere in the festival, with illuminated hula-hoops, dance or caroling. The 24th annual Baltimore Book Festival, a celebration of the literary arts, will feature author appearances and book signings, exhibitor and bookseller tents, readings on multiple stages and cooking demonstrations.
(promotionandarts.org)

Christmas on the Potomac at Gaylord National Resort

There’s still time to get to this year’s festivities, but it may be more practical to look at the coming year. The award-winning Christmas on the Potomac is Washington, D.C.’s Christmas Capital.

More than two million holiday lights and acres of fabulous decorations welcome groups to Gaylord National Resort, where an assortment of holiday events and activities get everyone in the spirit and create lasting memories. Highlights include Gingerbread Decorating Corner, Build-A-Bear Workshop®, a Christmas carousel in the Christmas Village, ice skating, the Broadway-style Cirque Dreams Unwrapped atrium show, ICE! featuring A Charlie Brown Christmas, and the nightly atrium tree lighting. Some events and activities may be subject to change in 2019, but family entertainment will remain center stage. Gaylord National Christmas is the perfect multigenerational tour. (marriott.com/gaylord-hotels/gaylord-national-harbor-christmas-on-the-potomac.mi)