5 Must See Places in India’s Pink City of Jaipur

Jaipur, the capital city of Rajasthan is famous for its scenic beauty. Located at a distance of approximately 160 miles from India’s capital city of Delhi, Jaipur is easily accessible via motorcoach, rail and air. Surprisingly, reaching Jaipur by air is a feasible option with regular national and international flights. Jaipur Railway Station welcomes commuters in heavy flow throughout the year.

The buildings here, built from red sandstone are abundantly seen throughout the city. There are a number of attractions including majestic forts and green gardens that make this city a wonder to behold. This city has been known to possess a great deal of literature and art within its culture as can be seen in various paintings, sculptures and building architecture. What gives Jaipur its charm is the indomitable sights that can be seen around the city. During the winter months between November and February, the charm of this city combines with the cool weather to leave a deep impression in the minds of tourists. There are a handful of must see places & things to do in Jaipur that have to be witnessed to be believed. Some are enlisted below. 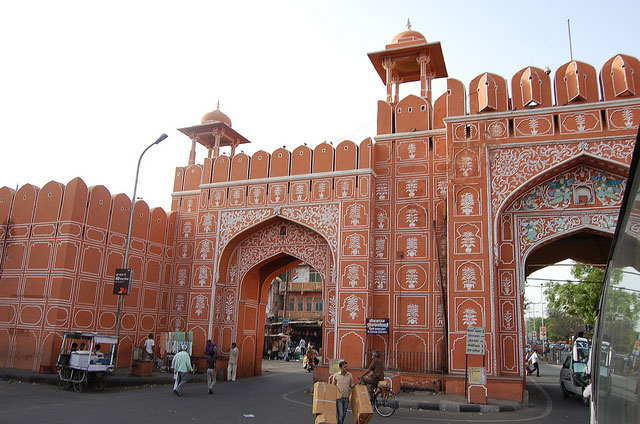 The walls around the city of Jaipur are constructed mostly in red sandstone. There are a around seven gates around the walls that lead inside the city. The walls around Jaipur are three meters thick and six meters high. There are a lot of exciting places to see inside Jaipur and early mornings are the best time to go around sightseeing. At the crack of dawn till the early mornings, Jaipur is vibrant with the orange glow of sunlight. The sandstone buildings stand out in the light of the morning sun and wave splendor throughout the city. 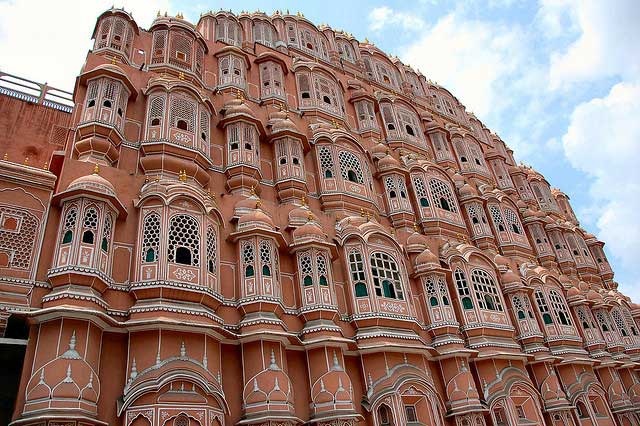 Photo by Russ Bowling, CC BY 2

Built in the year 1799, Hawa Mahal was a structure of profound magnificence. It is a four storey building that was constructed for the purpose of being an observatory. The building was constructed for enabling the women of Royal families to view the festivals taking place on the street without coning in sight of anyone. Hawa Mahal looks stunning in the mornings and the view of the rising sun from this structure is beyond compare. 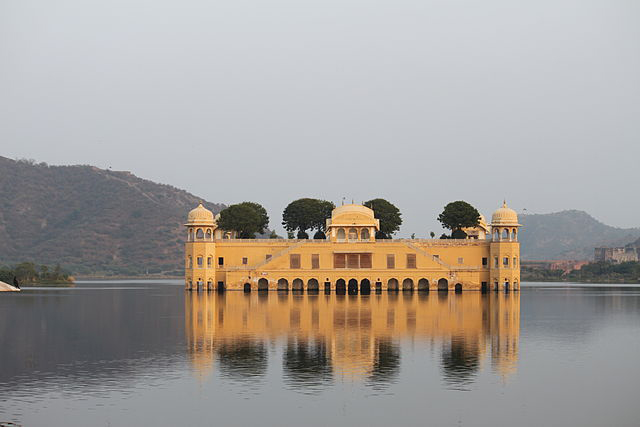 Jal Mahal (Water Palace) is located in the center of Man Sagar Lake in the city of Jaipur. The thing most peculiar about this structure is that it is covered by water on all four sides. Jal Mahal is the epitome of beauty as it experiences frequent breezes with an amazing view. The Aravali ranges are in plain view from the palace and several monuments can be seen in a distance. During the morning hours, sun shimmers on the surface of the water, giving an illusion of sparkling jewels floating on its surface. Nights are equally enthralling with quiet winds and sound of water setting the environment. You cannot go inside Jal Mahal as it is not open for visits, however you can view it from the distant lakeside.

Photo by Jean-Pierre Dalbéra, CC BY 2.0

Amber Fort is located at a distance of 11 kilometers from Jaipur Center. It is situated atop a hill at a high altitude in the town of Amer. Amber fort is a structure to behold. The fort is located at the peak of the hill while long pathways are carved into the mountain for access. Mornings in Amber fort bring forth unparalleled freshness while afternoons enthrall visitors with its awe-striking sunset. The orange glaze of the sun shines brightly on the walls while casting shadows of the rocky hill as far as the eye can see. In the morning, elephants rides are offered at a reasonable price which will take you from the base to top. 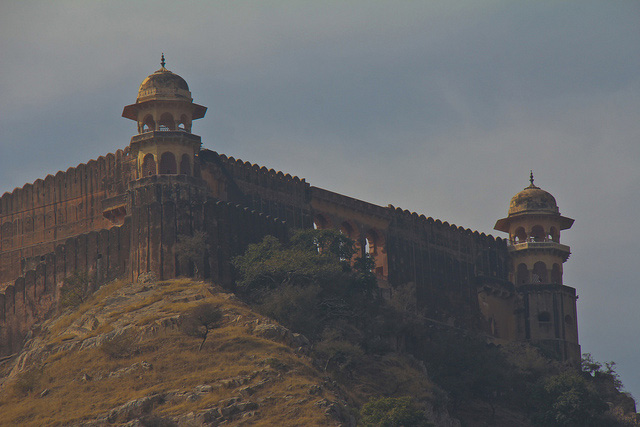 Photo by Piyush Kumar, CC BY 2

Nahargarh Fort is one of the most prominent forts in Jaipur. Nahargarh was erected as a premier defense line for the city of Jaipur in the 1700s. There is a lake inside the vicinity with steps leading to the tank below. The view from Nahargarh is one of unparalleled splendor. Padao is an open restaurant (only limited varieties of snacks & alcohols are served) located a little top of Nahargarh Fort from where a 360 degree view of Jaipur is visible. The evenings here are worth experiencing as the entire city is lit up and visibility of shimmering lights stretches across the span of the land.

Certain things in Jaipur are the most beautiful at a certain point in the day. The above listed places are every traveler’s dream to witness.

Himanshu is a traveler, wanderer, learning-photographer & a blogger at Pearls India Tour. He lives in the Pink City and likes it very much. Though hot summer & chilly winters makes him to travel to other places in the country, he always comes back to the place from where he started his journey – JAIPUR.