Back to Article ListDownload the Full Article 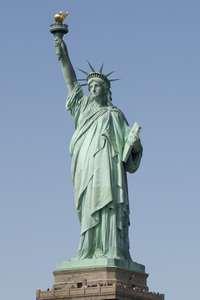 New York City abounds with all kinds of nooks and crannies that entice the curious. From offbeat museums, unusual tours and vestpocket parks to ethnic enclaves and neighborhood pizza joints, the streets of Manhattan, Brooklyn and other boroughs beckon the inquisitive wayfarer with hidden gems. For the city lover, New York is an endless feast, a place with countless pleasures, enough to last a lifetime.

But if you’re taking a group of fledging travelers to the Big Apple, you have to concentrate on the obvious—those iconic, must-see sights known around the world, locales that are part of our national vocabulary, the stuff of travel posters and calendars. There’s nothing like that initial glimpse of the Statue of Liberty or plugging in to the electricity of Times Square for the first time.

Here we offer a sampling of popular sights that define New York City for the wide-eyed tourist.

STATUE OF LIBERTY
A beacon of freedom for generations of immigrants who arrived in New York Harbor, this colossal figure remains a symbol not only of New York but of America. Liberty Island ferries depart from Lower Manhattan’s Battery Park.