Visit the Top Theater Picks for 2014 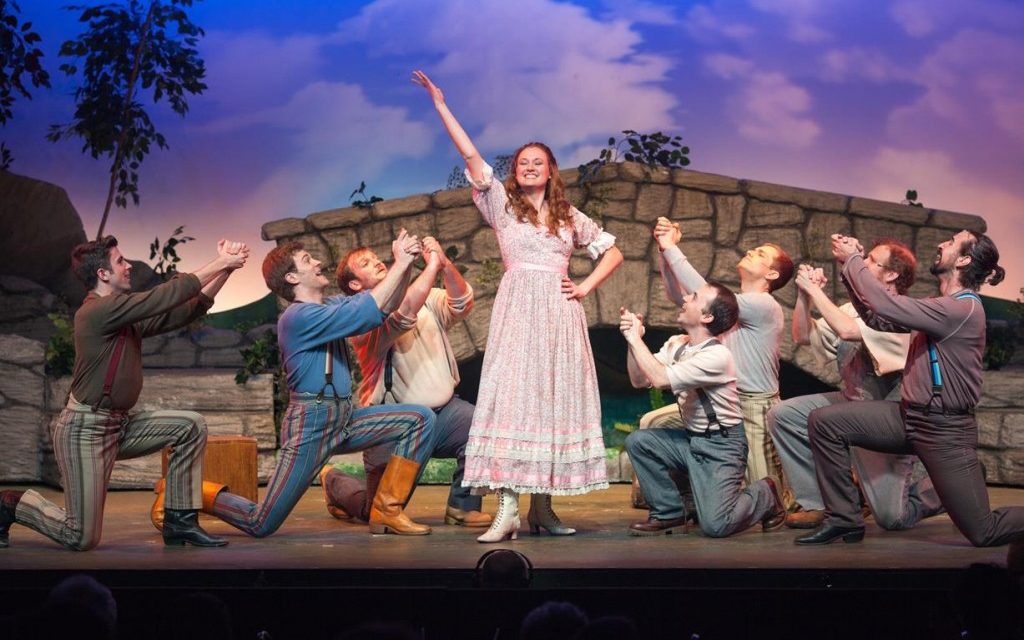 Leisure Group Travel Magazine spotlights theaters around the U.S. that are popular with tour groups, from dinner theatre and outdoor spectacles to jousting medieval-style.

From musicals to comedies to classic plays, theatres across America cater to groups’ wishes to include stage entertainment in their travels, whether it’s a matinee performance or a night on the town. Here are some choices for dinner theatres, outdoor spectacles and everything in between.

American Shakespeare Center mimics how a Shakespeare play would take place in the Renaissance era, complete with audience engagement, authentic costumes and large wooden platforms for sets. This season presents The Merry Wives of Windsor, Othello and Henry IV. The playhouse offers snacks and drinks for purchase before the performance and during intermission. The playhouse is handicap-accessible and offers hearing assistive devices and large print copies of scripts. (540-885-5588, ext. 24, americanshakespearecenter.com)

Since 1964, The Barn Dinner Theatre has been producing Broadway-style performances, or “dinnertainment,” making it the oldest continually operating dinner theatre in the United States. Dinner features a buffet, salad bar and dessert bar. After dinner, the show begins as the stage descends from the ceiling; the hydraulic stage has been in operation since the theatre opened. The Barn Dinner theatre is celebrating its 50th anniversary this year and will present the musicals Groovin’, Showtime in Harlem and Soul Sistas. (800-668-1764, barndinner.com)

Beef & Boards Dinner Theatre is a year-round, professional dinner theatre that provides a complete experience: a freshly-prepared dinner buffet, full bar service at your table, gourmet desserts and the professional production that follows. Most shows are Broadway musicals, with the occasional comedy or play. Productions showing this season include Disney musical Mary Poppins, Anything Goes, A Mighty Fortress Is Our Basement, Oklahoma and Fiddler on the Roof. Groups are offered discount tickets and are acknowledged from the stage before shows. (317-876-0503, beefandboards.com)

Chaffin’s Barn Dinner Theatre has produced comedies, musicals and mysteries since 1967, making it the second oldest professional dinner theatre in the nation. It has been voted Music City’s Best Dinner Theatre, received five stars in customer service and has been rated one of Nashville’s Top 25 Tourist Attractions. This season’s productions include A Bad Year for Tomatoes, Grease, A Fox on the Fairway, Ain’t Misbehavin’, Gone But Not Forgotten and A Christmas Carol. (615-646-9977, ext.11, dinnertheatre.com)

Circa ’21, housed in a restored 1921 vaudeville-movie theatre, is the only professional dinner theatre in the Quad Cities. Dinner features a five-entrée buffet and a choice between soup or salad served at your table. This season will present Fiddler on the Roof, Love, Lies and the Lottery, Funny, You Don’t Look Like a Grandmother and youth musicals. Groups are offered personalized service, complimentary tickets for escorts and drivers, and fresh home-baked cookies for motorcoach groups to take on their way home. (309-786-2667, circa21.com)

Cornwell’s Turkeyville features a hotel, various events, a gift shop and, of course, the dinner theatre with a 250-seat restaurant and 175-seat theatre. This season will show Boogie Woogie Swing Time, Suds, Ring of Fire—The Johnny Cash Story and Cornwell’s Christmas Carol. Group benefits include special pricing, personal greetings and a complimentary dinner and show for every 20 tickets bought. (269-781-4293, turkeyville.com)

Celebrating its 75th anniversary this summer, Dallas Summer Musicals is the largest producer of live theatrical entertainment in the Southwest and the second oldest summer theatre organization in the nation. Productions are shown year-round and typically feature Broadway musicals. This season features Stomp, Evita, Mamma Mia!, Jersey Boys and Nice Work If You Can Get It. Private, post-show Q&A with cast members is available to groups. Suites in the Music Hall can be used for group gatherings and pre-show parties. (214-426-4768, dallassummermusicals.org)

Das Dutch Village is an all-inclusive destination, including the Das Dutch Village Inn, Das Dutch Haus Restaurant & Bakery and Das Dutch Village Shops, which are all located within walking distance of each other in the quaint village. All productions are original modern retellings of Bible stories. This season will show St. John’s Revival with the Walking Roots Band, The Jesus Stories and Just Give ’Em the News. Groups are offered overnight dinner theatre packages that include a night in the group-friendly hotel, a buffet dinner and show tickets. (330-482-5050, dasdutchvillage.com)

Derby Dinner Playhouse will celebrate its 40th anniversary this year with Mary Poppins, A Mighty Fortress is our Basement, A Wonderful Life and Seven Brides for Seven Brothers. The theatre provides an intimate environment and is close to attractions in Louisville, Ky. A group packaging service includes pre-planned and customized itineraries with step-on guide service. Dinner features Derby Fried Chicken and a full salad bar. (812-288-2632, derbydinner.com)

The Fireside is Wisconsin’s only Equity Dinner Theatre and recognized as Wisconsin’s No. 1 year-round motorcoach attraction. This season, the theatre is celebrating its 50th anniversary and will present Mary Poppins, Smokey Joe’s Cafe, Les Miserables, Fiddler on the Roof, Driving Miss Daisy and the new anniversary edition of A Fireside Christmas. Except for Thursday buffets, Sunday brunches and Saturday five-course dinners, shows include a full three-course dinner served at the table. (800-477-9505, firesidetheatre.com)

The Great Passion Play is “America’s #1 Attended Outdoor Drama” according to the Institute of Outdoor Theatre of East Carolina University in Greenville, N.C. The play is located on the hillside and features over 170 cast members and dozens of animals. The site also includes the Christ of the Ozarks, Holy Land Tour, Bible Museum and Sacred Arts Museum. Backstage tours and buffet dinners are available. (800-882-7529, greatpassionplay.org).

Maine State Music Theatre is a professional summer theatre that produces four Broadway-quality musicals, three special events and two children’s shows at the Pickard Theater on the Bowdoin Campus in Brunswick. This season will feature Buddy: The Buddy Holly Story, Chamberlain – A Civil War Romance, Seven Bridges from Seven Brothers and Footloose. Each group gets a personal concierge who provides assistance throughout the experience. Other group benefits include discounts, preferred seating and post-show discussions. (207-725-8760, msmt.org)

Set within the walls of an 11th century-style castle, Medieval Times is North America’s longest running and most popular dinner attraction, now celebrating 30 years and more than 50 million guests. This season features a new educational matinee where students see a curriculum-based production. For all groups, shows feature a story line filled with medieval-style horsemanship, swordplay and other skills in a jousting tournament. Guests eat medieval-style meals with their hands and various group packages are available. (866-543-9637, medievaltimes.com)

Palace Theatre hosts a touring production company as well as events such as competitions, festivals, concerts, Easter Masses and religious conferences. This season’s productions include the musical Hot Jersey Nights and Illusions of Magic, which will feature Ben Blaque and his crossbow from America’s Got Talent 2012, the first indoor human cannonball and five 200-pound Bengal tigers. Groups are offered meet-and-greets, personal greetings, discounts and dinner options. (843-626-8927, palacetheatremyrtlebeach.com)

Prather Entertainment Group has three theatres across the country. Broadway Palm will show Mid-Life The Crisis Musical, The Music Man and Joseph and the Amazing Technicolor Dreamcoat. The Palms will show Burt and Me. Dutch Apple productions will include Shrek The Musical, Hairspray and A Wonderful Life. Each theatre is close to a tourism area, so groups have exciting itineraries for the entire region. Groups enjoy dinner buffets or even an upscale linen service in the Florida theatre. (Dutch Apple Dinner Theatre, 800-933-3759; The Palms Theatre, 480-924-6260; Broadway Palm Dinner Theatre, 800-475-7256; pratherentertainmentgroup.com)

Rainbow, celebrating its 30th season, is the only all-comedy dinner theatre in the U.S. Owned and operated by a husband and wife, the theatre offers personalization and a sense of family. The summer show is Always A Bridesmaid, followed by Drinking Habits, a new farce about nuns who secretly make and sell wine to save their convent. All food is cooked fresh and on-site. (800-292-4301, rainbowdinnertheatre.com)

Wagon Wheel Theatre, dating from 1961, is one of Indiana’s oldest theatres, featuring concerts, shows and Wagon Wheel Jr. for kids’ productions. This season’s production line-up includes Disney’s Mary Poppins, Catch Me If You Can, Gypsy, Fiddler on the Roof, And Then There Were None, The Marvelous Wonderettes and Rent. Groups are able to book lunch or dinner buffet reservations in a private banquet room. (574-267-8041, wagonwheeltheatre.org)