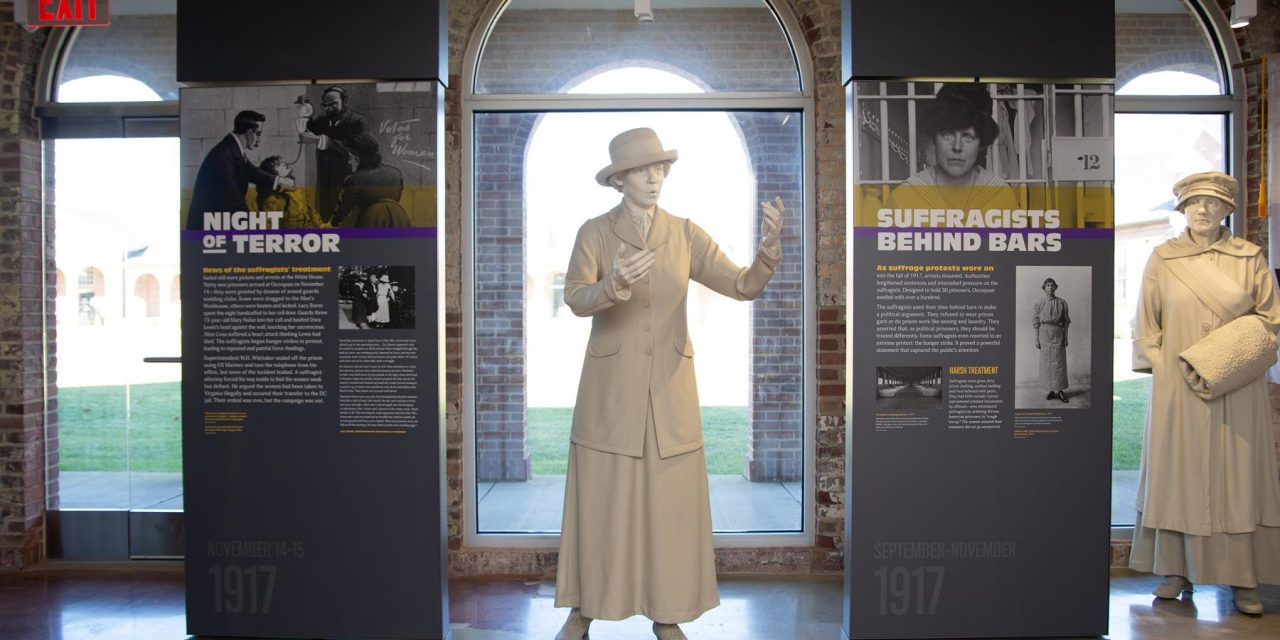 This year is the start of a new decade, and as such, this year contains milestones on national levels. On August 18, 1920, America rejoiced as the 19th Amendment, which gave women the right to vote, was ratified. This summer is the 100th anniversary of the 19th Amendment and the women’s suffrage movement, where brave women used their voices to gain traction in advocating for women’s rights. This year, many locations in Virginia are celebrating this anniversary with exhibits and events to commemorate both the fight and the victory of women earning the right to vote.

In August, Occoquan Regional Park in Fairfax County will host an exhibit at the Turning Point Suffragist Memorial honoring American suffragists, with a special focus on those imprisoned at Occoquan. These suffragists endured harsh conditions and abuse to win voting rights for American women. The memorial will honor these brave women and provide awareness and education about how their courage, methods and commitment led to the passing of the 19th Amendment. 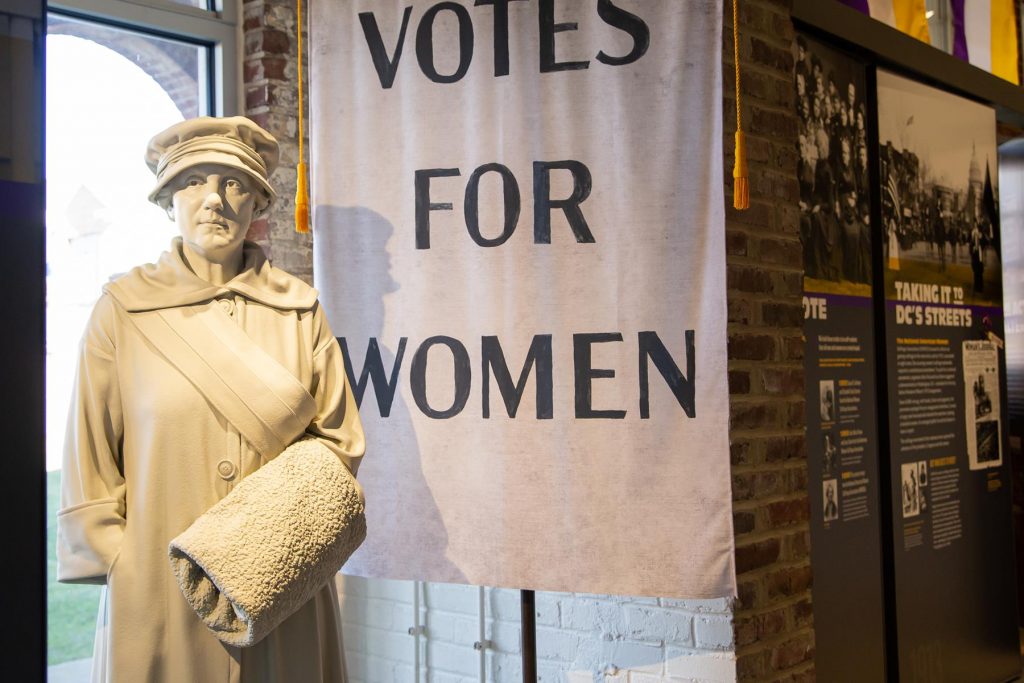 The Lucy Burns Museum in Lorton focuses on commemorating the party’s efforts in obtaining women’s right to vote. The museum tells the story of the suffragists who were arrested for courageously picketing the White House in 1917. The museum also aims to engage visitors in the history of the Lorton Correctional Facilities that operated from 1910-2001, founded by President Roosevelt during the era of progressive reform but was later repurposed for a growing arts center.

The Virginia Museum of History and Culture in Richmond is hosting the exhibit Agents of Change – Female Activism in Virginia from Women’s Suffrage to Today through late September. This exhibit was organized in conjunction with the Women’s Suffrage Centennial and it celebrates a century of women’s social and political activism in the Commonwealth. The exhibit’s goal is to illustrate the efforts of the suffragists as well as the impact they made in history, their communities, the commonwealth and the nation.

The VMHC will also engage a group of contemporary “agents of change” to recreate an iconic 1915 photograph of the Virginia suffrage movement. Also taking place in Richmond is the #BallotBattle: Richmond’s Social Struggle for Suffrage exhibit which will be on display at The Valentine Museum through late September. The exhibit uses modern social media platforms to profile Richmond viewpoints and the racial and generational tensions exposed. The Valentine Museum will be using the hashtag #BallotBattle on social media in order to illustrate five different Richmond viewpoints that reflect the social, racial and generational tensions between the pro and anti-suffrage activists. 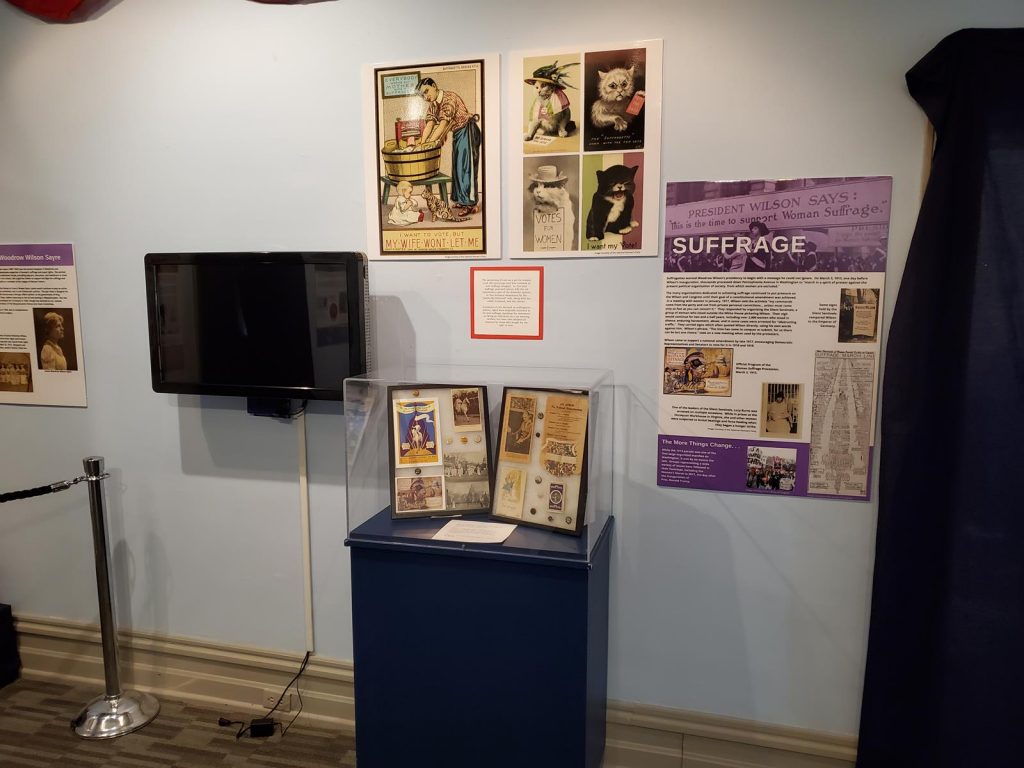 The Library of Virginia in Richmond will host the exhibit, We Demand: Women’s Suffrage in Virginia, through early December. This exhibit reveals how Virginia women created two statewide organizations to win the right to vote. Three years of dedicated research went into the exhibition, which showcases banners, pins and flags that were all used during the fight for women’s right to vote.

The Woodrow Wilson Presidential Library and Museum in Staunton will have a temporary Protesting the President exhibit on display through 2020 discussing the issues that President Wilson faced while in office. The exhibit will feature objects that cover the suffrage movement as well as anti-war, civil rights, and Prohibition. Wilson’s views on women’s rights changed throughout the duration of his presidency as his daughter was active in the movement, and his wife hinted she wanted him to support women’s right to vote.

The Lynchburg Museum will offer an exhibit commemorating 100 Years of Women’s Suffrage in Lynchburg, Virginia. The major exhibit on display beginning in August is We Demand: Women’s Suffrage in Virginia, which will run through September. This exhibit will tell the stories of the important heroines that played large roles in women’s suffrage such as Elizabeth Langhorne Lewis, who was the second most influential suffragist in Virginia behind Virginia founder Lila Meade Valentine. The exhibit will include other storylines such as the Men’s League for Equal Suffrage and will highlight the first three African American women who registered to vote in Lynchburg: Lucy Bolding Stephens, Lugie Buck Ferguson and Virginia Cabell Randolph.