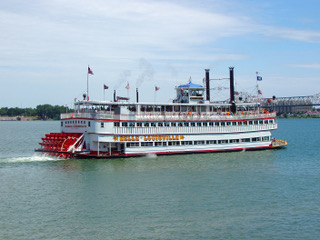 The American Bus Association’s (ABA) Destinations magazine has chosen both the Belle of Louisville and the Muhammad Ali Center as a “Best of the Best Travel Supplier in 2017.”  The Belle and the Ali Center are two of 42 winners that make up top hotels, theatres, museums, festivals, shopping experiences, and more across North America.

The Belle of Louisville was named a winner in the Travel: Poetry in Motion category.  The Belle is the oldest operating

Mississippi-style steamboat in the world.  It celebrated its Centennial birthday in 2014, and welcomed nearly 4,000 motorcoach visitors in 2016.  The Belle is one of the most popular group-friendly attractions in the city.

The Muhammad Ali Center celebrates the life and legacy of the world-class boxer and global humanitarian who was born and raised in Louisville.  The Center took honors in the Museums: Not Your Everyday Gallery category.  Since its opening in 2005, the Ali Center has proven to be a popular itinerary stop for all types of group travel.

Two Southern Indiana tourism partners were also recognized on this year’s list.  Schimpff’s Confectionary in Jeffersonville, Ind., was named one of the best in the Shopping: Delicious Delectable category.  The Culbertson Mansion State Historic Site in New Albany, Ind., was named in the Historic Landmarks: History is Fun category.

Since 1968, the Louisville Convention & Visitors Bureau’s (LCVB) primary goal has been to enhance the city and county’s economy through tourism development – to promote and sell Louisville as a destination for conventions, trade shows, corporate meetings and pleasure and business travel on a worldwide basis. The LCVB was one of the first Destination Marketing Organizations to become accredited in 2006, by the independent, international standards program developed by the Washington, D.C. based Destination Marketing Association International. Louisville hosts more than 24 million visits annually for an estimated economic impact of $3.4 billion which supports 27,000 local tourism-related jobs.