On the Trail of Grant Wood

Inspired by the hayfields, rows of corn and barns that blanket the rolling hills of eastern Iowa, the paintings of Grant Wood mirror the natural poetry of Midwestern landscapes and celebrate the values of hardworking rural folk.

Everyone is familiar with Wood’s iconic American Gothic, but touring the countryside and towns where he lived and worked reveals much more about the man and his art. In observance of the 125th anniversary of Wood’s birth, Iowa this year is promoting the legacy of its famous son. 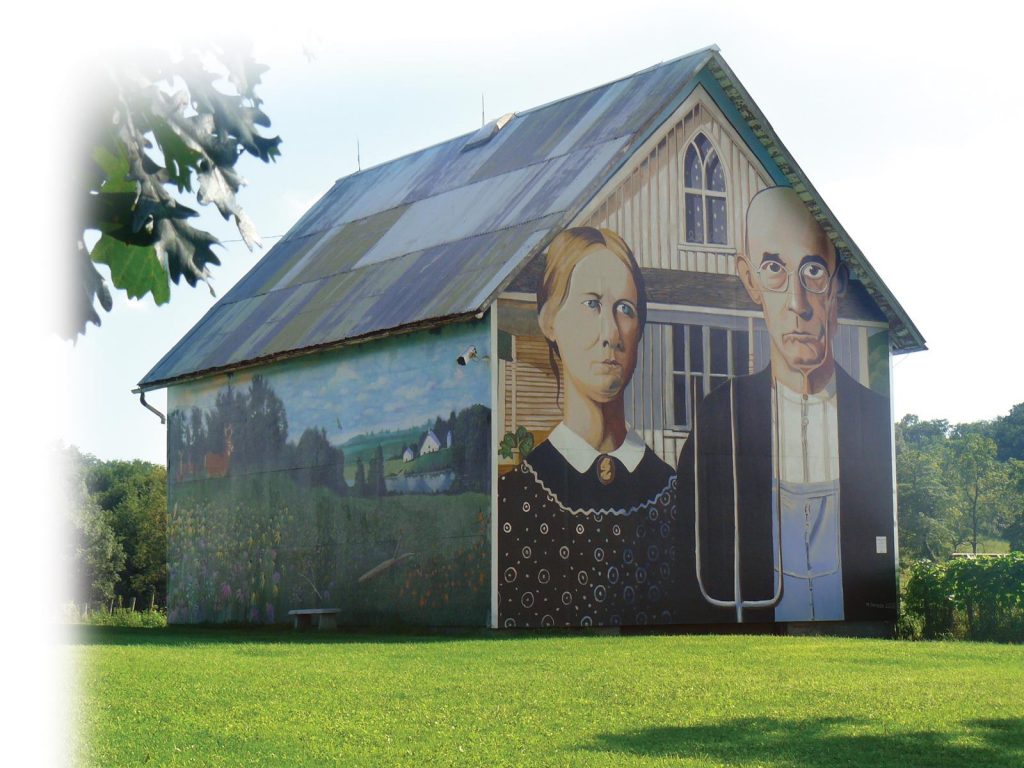 One of the most influential American artists of the 20th century, Wood came to fame during the Great Depression of the 1930s. He is credited with inspiring the Regionalist art movement, which extolled small-town life to the world at large.

The farm where Grant Wood was born in 1891 no longer exists, but visitors to Anamosa (pop. 2,000) can visit the one-room Antioch Schoolhouse, which he attended from the first to fourth grades. The Grant Wood Art Gallery & Visitor Center, a Main Street storefront in Anamosa, has historical photos of Wood, a 20-minute video about his life, displays of American Gothic parodies and a poseworthy cut-out of the painting. 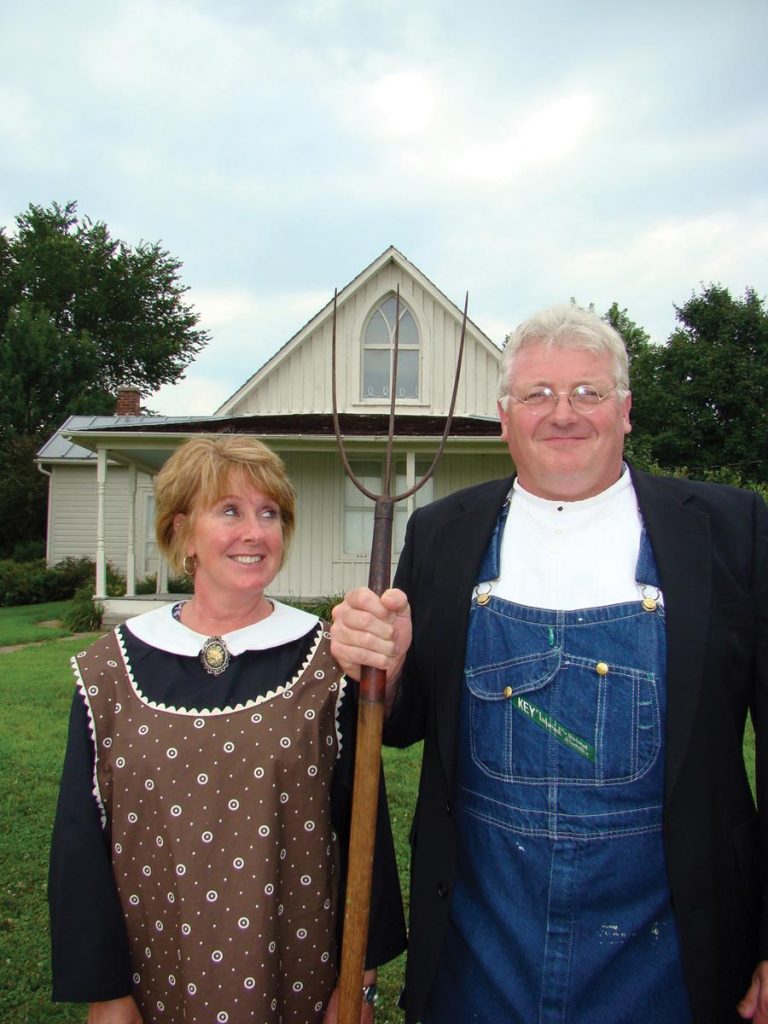 Remnants of the Stone City Artist Colony that Wood founded can be seen in the little town of Stone City, a few miles west of Anamosa. The town was known for its limestone quarries, the former mansion of a quarry owner being the focal point of the colony, which lasted only two summers (1932-1933). Visitors will see a medieval-looking stone water tower and can pose in front of a replica of the American Gothic house facade.

When Wood was 10, his father died and the family moved to Cedar Rapids, 25 miles southwest of Anamosa. Upon graduating from high school, he went to art school in Minneapolis and also took classes at the University of Iowa and Art Institute of Chicago. After serving in World War I, Wood returned to Cedar Rapids to support his mother and taught art at two junior high schools from 1919 to 1925. It was in Cedar Rapids where Wood painted his most important works, including American Gothic in 1930.

The Cedar Rapids Museum of Art houses the world’s largest collection of Grant Wood paintings and also displays works by those associated with him. One of the most important pieces is Wood’s Woman with Plants (1929), a portrait of his mother holding a potted plant. A tour of Cedar Rapids also includes the museum-owned Grant Wood Studio and Home, a light-filled space where Wood lived with his mother and sister from 1924-1935.

Fun photo opportunities await visitors to Cedar Rapids this year as the city is sprinkled with 24 sets of life-sized fiberglass statues of the American Gothic farmer and daughter. Individually painted by local artists, statues in the exhibit Overalls All Over (a reference to the man’s bib overalls) will be on view through Sept. 4.

Iowa’s classic Grant Wood site is the American Gothic House Center, located at 300 American Gothic Street in Eldon, a town of 1,700 southwest of Iowa City. Here at this attraction, just steps from the actual house that Wood chose as the backdrop for the painting that propelled him to national fame, tourists have fun perusing parodies of his painting and striking their own pose in front of the 1881 white frame home. Wood liked the vertical lines of the house and its distinctive Gothic-style window, pairing them with the elongated figures of a farmer and his spinster daughter (usually mistaken for a married couple.) American Gothic earned Wood third place in the Art Institute of Chicago’s 43rd annual Exhibition of American Painting and Sculpture and today hangs in that museum. Groups can arrange a docent-led tour of the Eldon center’s exhibits and see a film; costumes and props are available for photos.

The art of Grant Wood can be seen all over Iowa. The Des Moines Art Center displays The Birthplace of Herbert Hoover, which depicts the humble cottage in West Branch where America’s 31st president was born. In Davenport, check out the two Grant Wood self-portraits at the Figge Art Museum. The Dubuque Museum of Art has a number of significant works by Wood.

The artist also was involved in public art initiatives during the Depression and was the Iowa director of the government’s Public Works of Art Project (PWAP). The murals Wood designed for Iowa State University’s Parks Library in Ames were executed by a team of PWAP artists. The Corn Room murals that Wood did for several hotels are displayed in the Sioux City Art Center and Pottawattamie County Courthouse in Council Bluffs.

Clearly, Grant Wood showcased the noble simplicity of life in rural Iowa. Reflecting an affinity with the common man, Wood said, “I want to reach everyday people, not just the artists and art critics of the world.”

Decades after his death, he continues to loom as a giant in the art of 20th century America—in the eyes of gallery-goers and scholars alike.