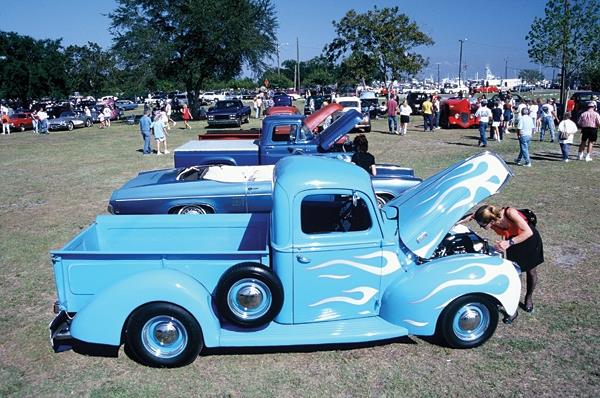 The American Bus Association has designated three Mississippi events among the Top 100 Events in North America for 2011: Canton Flea Market in Canton, Christmas in the Pass in Pass Christian and Cruisin’ the Coast in Biloxi.

“Having three Mississippi venues selected for ABA’s Top 100 Events is a significant boost in visibility for the state among professional tour planners,” said Mary Beth Wilkerson, tourism director for the Mississippi Development Authority. “It demonstrates that Mississippi has world-class, year-round events that offer great value and entertainment for tour groups and individual travelers alike.

With the release of the ABA’s 2011 Top 100 Events in North America, the organization celebrates the program’s 29th year. What began as a way for motorcoach operators to incorporate new product into their itineraries has grown to one of the most sought-after lists by travel professionals, motorcoach operators and the general public.

According to studies completed by researchers at The George Washington University and Dunham and Associates, one overnight visit by a motorcoach group can leave $5,000 to $13,000 or more in a local destination’s economy. Those dollars are spent on lodging, meals, admissions, fees, shopping, souvenirs, services and local taxes.

ABA’s 2011 Top 100 Events Selection Committee selected the three Mississippi events from among a record number of more than 650 event nominations submitted by ABA members. Judges considered the event’s broad appeal, its accessibility to motorcoaches, skill at handling large groups and other criteria. The full list of events is available at www.buses.org/top100.

Canton Flea Market Arts & Craft Show, Canton, May 12, 2011.
This bi-annual event, within walking distance of the downtown area, attracts more than 1,100 artists and craftsmen from around the country. Pottery, jewelry, artwork and other handcrafted items are showcased. For more information, contact Jo Ann Gordon at 800-844-3369, www.cantontourism.com.

Cruisin’ the Coast, Biloxi, Oct. 2-9, 2011.
Cruisin’ the Coast has become one of the most popular events for the Mississippi Gulf Coast. Car enthusiasts from across the United States and Canada drive to the Mississippi Gulf Coast to showcase their custom vehicles and cruise a variety of antique, classic and hot rod automobiles with stops along the coast in the cities of Ocean Springs, Biloxi, D’Iberville, Gulfport, Long Beach and Bay St. Louis. Each city’s site has a festival of its own with live bands playing favorites from the 1950s and ’60s. Cruisin’ the Coast also has a kick-off parade, swap meet, drag racing, auto auction, oldies headline entertainment, sock hop, car corral and casino action. For details, contact Lisa Burnett, 888-808-1188 or cruisinthecoast@cableone.net; www.cruisinthecoast.com.

Christmas in the Pass, Pass Christian, Dec. 2, 2011.
Christmas in the Pass is a citywide holiday open house where local merchants invite visitors to share in the holiday spirit with complimentary refreshments while browsing their boutiques and shops. Along the streets will be arts and crafts, antiques, concerts, caroling and a parade complete with Santa, Mrs. Claus and the elves. The evening highlight is the lighted boat parade and a tree lighting ceremony at the gazebo in War Memorial Park. Stroll the streets of the historic downtown and harbor or take time to unwind in one of the restaurants offering Southern hospitality. Contact Emily Pickering at 228-604-0014 or emily@mscoastchamber.com; www.passchamber.com