The Greenbrier: Majesty in the Mountains

The wooden sign placed in the hallway read “Quiet Please, It’s Sleepy Time Down South.” But I wasn’t about to retreat to my guest room, even though it was luxurious, the hour was late and I was tired after a full day touring Southern West Virginia. 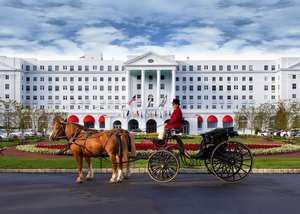 I had just checked in to a place I had always dreamed about—The Greenbrier in White Sulphur Springs. One of the nation’s elite resorts for more than two centuries, it’s a gracious blend of American history and Gone with the Wind. I wanted to savor every minute, so I snooped around the public areas for well over an hour, poking my head into ornate salons and ballrooms, reading the words on vintage oil paintings and just soaking up the atmosphere.

In room after palatial room I got swept away in art and antiques that jogged my memory of old schoolhouse lessons, perusing portraits of men like Thomas Jefferson, James Monroe and the nation’s first Chief Justice, John Marshall. Mounted above the upper lobby fireplace was a full-length portrait of another Virginian, George Washington, done by Jane Stuart, the daughter of Gilbert Stuart. Other pieces of art in the museum-like parlors showed Washington Crossing the Delaware and the Signing of the Declaration of Independence.

You’ve probably seen pictures of The Greenbrier, most likely the signature view of the main hotel building, its columned, Georgian facade reminiscent of the White House but much grander in scale. (The earliest part of today’s temple-like hotel opened in 1913, but it was substantially expanded in 1931.) A broader view shows the greenery of gardens, lawns, golf courses and undulating ridges of the Allegheny Mountains surrounding the chalk-white complex set on 6,750 acres in a small valley.

Inside, the decor of “America’s Resort” is just as stately, the regal salons sumptuously appointed with exquisite plasterwork, crystal chandeliers, potted plants and giant mirrors. The ceilings are high, the corridors wide. I counted 13 grand pianos.

The rhododendron-motif wallpaper suggests the mountain flower so associated with the Appalachians. It’s one of the signature design elements introduced in the late 1940s by New York interior decorator Dorothy Draper, who used a lush color scheme of greens, pinks and reds that still wows guests today. Squares of black and white marble accent the lobby floors.

The Greenbrier, a fashionable watering hole for well-to-do Southern families throughout the 1800s, has been a high-society playground for princes and princesses, presidents and prime ministers, senators, Congressmen, celebrities and corporate tycoons. Their visits are chronicled throughout the public rooms. In the North Parlor, right next to my bedroom, I saw the larger-than-life portrait of Grace Kelly, the American actress who became Princess Grace of Monaco, and a newspaper story about how she and Prince Rainier tried to keep their 1963 family visit a low-profile affair. The room also has a bust of Gen. Dwight Eisenhower.

The hallway between the lower lobby and movie theater is graced with photos of important guests. You’ll see U.S. presidents like Eisenhower, Johnson and Reagan; frequent guests the Duke and Duchess of Windsor; New York Yankees great Lou Gehrig on the golf course; and Hollywood stars like Debbie Reynolds and Eddie Fisher, who spent part of their 1955 honeymoon at The Greenbrier. More than 26 U.S. presidents have visited the genteel mountain retreat.

More resort history is told in the Presidents’ Cottage Museum, a two-story building where five pre-Civil War presidents stayed. Built in 1835 for a Louisiana sugar planter, it’s located in one of the rows of cottages spread throughout the grounds.

Also of historical interest is the Cold War bunker built under The Greenbrier between 1958 and 1961. Tours of the facility, once a top secret, are popular with overnight guests and day visitors alike. The former U.S. Government Relocation Facility was designed to accommodate the U.S. Senate and House of Representatives, but never had to be activated. The secrecy of its location was maintained for more than 30 years until May 31, 1992, when The Washington Post published a story exposing the underground “city.” The fallout shelter included meeting rooms, dormitories, a cafeteria, clinic and communications briefing room. (The Greenbrier also did its patriotic duty during World War II, serving as a U.S. Army hospital. It was a Confederate hospital during the Civil War.) 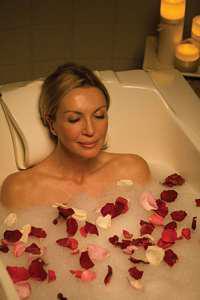 Dining is a highlight of staying at the 710-room resort, but non-registered guests are welcome in any of the 13 restaurants, cafes and lounges. The spacious, chandeliered Main Dining Room, with its historic portraits and forest of white columns, offers the quintessential Greenbrier experience, featuring Southern and French-inspired dishes in a formal setting where coats and ties are required for dinner. Prime 44 West steakhouse, the newest restaurant, honors NBA legend and West Virginia native Jerry West.

The famed culinary brigade is led by Rich Rosendale, CMC, executive chef and director of food and beverage. Chef Rosendale is one of 66 Certified Master Chefs in the United States and recently won the prestigious Bocuse d’Or USA finals held at the Culinary Institute of America in Hyde Park, N.Y. He will represent the United States at the 2013 Bocuse d’Or in Lyon, France.

Activities at The Greenbrier range from horseback riding, skeet shooting and fly-fishing to croquet, tennis and spa treatments using the sulphur water that originally attracted visitors, as early as 1778, who came to take “the cure.” Water from the spring was bottled and sold at drugstores across the country from the early 1900s until the bottling equipment was dismantled in 1942.

Since the second decade of the 20th century the resort has been famous for golf. The Greenbrier boasts four golf courses—The Old White, The Greenbrier, The Meadows and Greenbrier Sporting Club’s private course. For many years the golf pro was Sam “Slammin’ Sammy” Snead, and you can soak in some of that golf lore over lunch or dinner at Sam Snead’s at The Golf Club.

These days the big annual event is the Greenbrier Classic on the PGA TOUR, which debuted in 2010. Set for July 2-8 this year, it coincides with the Greenbrier Classic Concert Series, whose superstar lineup features Toby Keith, Rod Stewart, Lionel Richie and Bon Jovi. Tickets to all concerts, three practice rounds and pro-ams, and four competition rounds are $159, or $189 after May 1. (Concert tickets are not sold separately.)

Also introduced in 2010, under the leadership of new owner Jim Justice, a West Virginia entrepreneur, was the elegant Casino Club. Going a long way in helping the resort reinvent itself, the guests-only casino, tucked underground below the main entrance, features 35 tables games and 320 slot machines. A jacket is require after 7 p.m.

Declared a National Historic Landmark in 1990, The Greenbrier is obviously an attraction in itself. Whether your group is coming to stay, dine, tour or attend a special event, an encounter with “America’s Resort” will be a high point of their time in West Virginia.

For information on The Greenbrier, log on to greenbrier.com.