The Roanoke Valley claims to have the highest number of restaurants per capita of any metropolitan area in Virginia, and I recently had a chance to sample some of them on a whirlwind three-day visit to the city of Roanoke.

I should say from the outset that my tastes lean toward fast food, comfort food and Southern food. Put an emphasis on Southern. Whenever someone asks my favorite type of cuisine, I answer “Southern,” with visions of fried chicken, biscuits and other hearty fare in mind.

So, I’d have to say my favorite eatery was Thelma’s Chicken and Waffles in downtown Roanoke’s Historic Market District. Offering generous portions of soulful Southern dishes, this friendly place was founded by Thelma Mayo, who retired three years ago, and now is run by sons Albert and Chris. 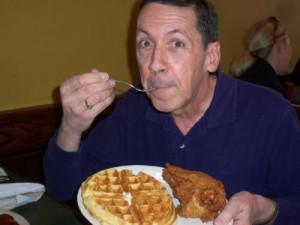 As the menu states, Thelma’s is a “family-owned business based on faith, hope and one love!” Our waitress, Gigi, asked if it was our first visit. When I answered yes, she said, “I want to welcome you into our family.”

Soon my order, a plate with one waffle and a fried chicken breast, arrived. With guidance from my eating partner, David Aldridge of the Roanoke Valley CVB, I quickly picked up the technique of cutting off a chunk of waffle, adding a biteful of chicken to the fork and dabbing it in syrup, a heavenly ritual I wish I could duplicate more often in my life. You also can get the waffle with chicken tenders, wings, or a leg and thigh.

Before I cut into the chicken breast, I sampled the waffle without syrup. It tasted so good plain that I asked Gigi if there was a secret ingredient.

“It’s just made with a lot of love” was all she would tell me. Same thing for the surprisingly yummy collard greens, which apparently were simmered in bacon grease or ham hocks.

Thelma’s menu also includes fried catfish, baby back ribs and meat loaf, plus sides and appetizers like macaroni and cheese, chili cheese fries and fried green tomatoes. And it offers a whole range of breakfast items, from flapjacks to omelets. (www.thelmaschickenandwaffles.biz)

Southern comfort food also appears on the menus of fine dining restaurants like Table 50, a few doors down Market Street. Choices on my visit included pan-fried chicken thighs in a red wine balsamic and country ham reduction with three-cheese mac and cheese and collard greens. But I chose as my entrée the Seared Carolina Grouper with fire-roasted corn polenta cake. The pulled pork barbecue in puff pastry with smoked corn and goat cheese was a winning appetizer. Others in our group had the Duo of Duck (confit leg and seared breast over herbed spaetzle, with fig), Australian rack of  lamb over brussels sprouts-and-potato hash and blackened ahi tuna over andouille sausage and crawfish risotto cream. Table 50, like many downtown restaurants, occupies an historic building with exposed brick walls and a pressed-tin ceiling. (www.table50roanoke.com)

The cuisine at Blue 5, another downtown hotspot, also reflects Southern influences. In The Roanoker magazine’s 2011 dining awards, it won in a record 24 categories. Named for the blues and jazz groups that play there, Blue 5 placed first in Best Downtown Restaurant, Best Ribs, Best Appetizers and Best For Group Gatherings.

There’s no better place to start the day than The Roanoker, a city institution since 1941. I could just feast on its fluffy biscuits spread with butter and jelly or doused in sausage gravy. Morning favorites also include pancakes, eggs, fried apples, grits and country ham in red-eye gravy. The traditional Virginia restaurant, also famed for its fried chicken and other comfort foods, moved to this location 30 years. A large room in the back is ideal for groups. (www.theroanokerrestaurant.com)

City Bliss, a cheery coffeehouse steps from the City Market, sports bright turquoise, pink and chartreuse walls decorated with folk art and coffee bean sacks. It’s a cozy place to linger over a latte or bubble tea, perhaps with a wrap or panini. (www.facebook.com/citybliss)

Roanoke Weiner Stand, opposite City Bliss, is a no-nonsense, 96-year-old eatery that serves up great hot dogs dressed in onions, mustard and a generous dollop of sweet, dark chili with a hint of cinnamon, Cincinnati-style. Run by the same family since 1916, the classic hot dog joint is plastered with well wishes from past guests, including celebrities, politicians and former First Lady Barbara Bush. An orange neon crown inscribed “Hot Dog King” adorns the exterior. 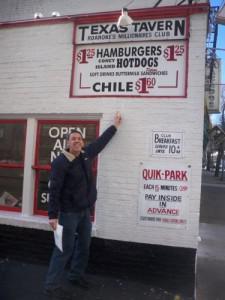 Grabbing a burger at the 10-stool Texas Tavern, a real hole-in-the-wall that often crops up in Roanoke dining roundups, is a time-honored tradition with locals, whether for lunch or a middle-of-the-night snack. Emblazoned with a neon “Eat” sign in the shape of an arrow, the tiny, white-painted diner (or dive?) is covered in black and red lettering, including the appellation “Roanoke Millionaires’ Club.” Specialties are the Cheesy Western, a cheeseburger with a fried egg and mustard-y relish ($2.35) and the $1.60 bowl of “Chile” (heavy on pinto beans and, yes, spelled with an “e”). If you don’t want a grouchy cook slinging your plate across the counter, opt for the walk-up window. Texas Tavern, which also offers breakfast fare, has been in the Bullington family since 1930. (texastavern-inc.com)

At the other end of the dining spectrum is the Regency Room in the historic Hotel Roanoke, a downtown landmark since 1882. Steeped in tradition, this regal, special-occasion restaurant has been part of the hotel since 1938. A Southern graciousness pervades the circular, Georgian-style room, with its red draperies, red carpet, fluted white pilasters and lampshade sconces. The china’s dogwood-blossom pattern pays homage to Virginia’s state flower.

The Regency Room’s signature dishes, peanut soup and spoonbread, are part of the lunch buffet, which also includes the heavenly bread pudding. Groups can combine a hotel tour with lunch. The dinner menu features such entrees as the Signature Crab Cake and Pecan-Crusted Appalachian Trout. Order Bananas Foster for dessert and enjoy the fireworks show as the waiter demonstrates his flambéeing talents. (www.hotelroanoke.com)

Wherever I go, I look for bakeries. In Roanoke I found several places to indulge my sweet tooth.

One morning I got off to a great start with a blueberry pancake breakfast donut at Uptown Joe’s, a coffee/sandwich/donut shop in downtown’s former Patrick Henry Hotel, now a sparkling apartment building for college students and others. The blueberry cake donut, covered in maple frosting and sprinkled with bacon bits, was a moist, melt-in-your-mouth wonder. Flavors change daily, but other decadent ones I spied were caramel apple cheesecake, red velvet, German chocolate and the Botetourt Bog, a chocolate-frosted chocolate donut with Oreo bits and chocolate sprinkles. Uptown Joe’s is a new location for Blue Collar Joe’s in Daleville, which has been recognized on national TV shows as one of the best donut shops in America. (www.uptownjoes.com)

Doug and Evie Robison’s Wildflour Market & Bakery—I like the name—has been a fixture in the historic Old Southwest neighborhood for 16 years. Known for its salads, soups, breads, pastries and cakes like Death by Chocolate, Wildflour is the No. 1-rated Roanoke restaurant on yelp.com and placed first in Best Baked Goods in The Roanoker’s 2011 competition. The emphasis is on healthy foods, and the Robisons grow some of the ingredients in the garden in back. The airy dining room, with fresh flowers on the tables, is accented with framed art for sale, including works by Evie. I loved the tomato cheddar soup. (www.wildflour4thst.com)

In the Historic Market District, On the Rise Bread Company is the place for artisan breads (like the signature walnut raisin), gourmet cookies and brownies, and sinfully rich cakes, plus paninis and soups like carrot ginger and potato rosemary.

For a different kind of dough, bite into the delectable thin-crust pizzas baked in the wood-fired oven at Fork in the City, on the edge of downtown. For dessert, consider the Brick Oven S’mores. (www.forkinthecity.com) 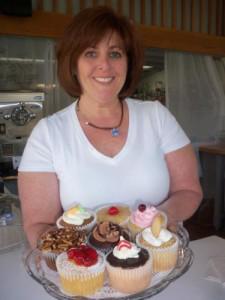 What could be more fun than a cupcake shop? For a gourmet experience, head over to the historic Grandin Village neighborhood, where Viva la Cupcake owner Pennie Ahuero, a former bartender, likes to experiment with fresh fruit in the batter and wine and liquors in the frosting. I still think about the banana cream pie cupcake I had.

The signature Four-Chocolate cupcake is filled with white chocolate custard, topped with butter cream frosting and drizzled with chocolate. The Cosmopolitan is made with cranberry and lime zest and topped with a cranberry-vodka-lime frosting. Other flavors include pineapple (topped with pineapple ring), strawberry and cookie dough. Peppermint and egg nog are seasonal favorites. (www.vivalacupcakes.com)

Just around the corner from Viva la Cupcake is Pop’s Soda & Ice Cream Bar, a soda fountain known for its sundaes, milkshakes and old-fashioned sodas made with Homestead Creamery ice cream, a local favorite. It just won The Roanoker’s award for Best Grilled Cheese. (www.facebook.com/popsicecream#!/popsicecream?sk=info)

For travel information on Roanoke and environs, contact the Roanoke Valley CVB, 800-635-5535; www.visitroanokeva.com.