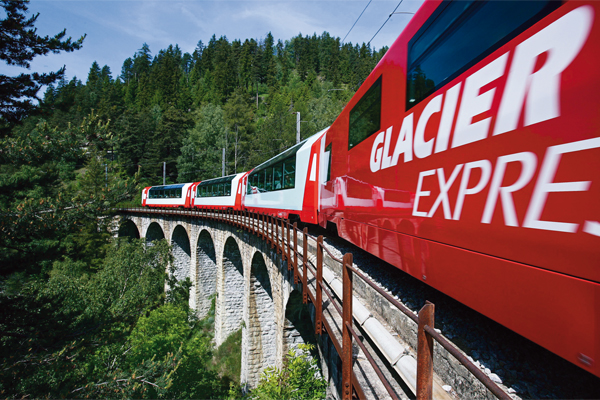 Exciting rail trips for groups coming down the track

Discovery of Switzerland has just become a lot easier for groups with the introduction of new Grand Train Tour packages offered by the Swiss Travel System. Best of all, you need only one ticket.

Switzerland is already known for its convenient and on-time transportation, especially its clean and fast trains. The leading-edge Grand Train Tour encompasses trains, buses, boats and 75 city transportation systems to give groups a wide range of choices in destinations, modes of transportation and length of travel.

With the Train Tour, your group can start and stop wherever they like, hopping off to enjoy city, lake or mountain highlights, then continue the journey when ready. The Train Tour offers a variety of suggested routes beginning at three days in length, but groups are free to plan their own routes and agendas to suit their individual needs. Besides the many regions, towns, cities and mountain areas in Switzerland to explore, there are numerous mountaintop excursions that also are appealing, with a 50% price reduction on most mountain railways with the Swiss Travel Pass.

The pass, available for 3, 4, 8 or 15 consecutive days, entitles you to unlimited rail, bus and boat travel throughout the Swiss Travel System network. The Swiss Travel Pass also includes the Swiss Museum Pass, allowing your group free entrance to 480 museums and exhibitions.

Let’s take a Train Tour to see what your group can expect, starting in Geneva on the westernmost fringe of Switzerland. Geneva is a cosmopolitan city, headquarters of the Palais des Nations, which is the European headquarters for the United Nations. Geneva also boasts the Jet d’Eau, a 460-foot-high water fountain in Lake Geneva and a famous city landmark. Your group might also enjoy seeing the International Red Cross and Red Crescent Museum.

Culturally, the city has much to offer. International artists perform in the Grand Théâtre and Geneva Opera House, and an extremely diverse range of museums are located here such as the Musée International de l’Horlogerie, a watch museum with a collection of jewelry watches and musical clocks. 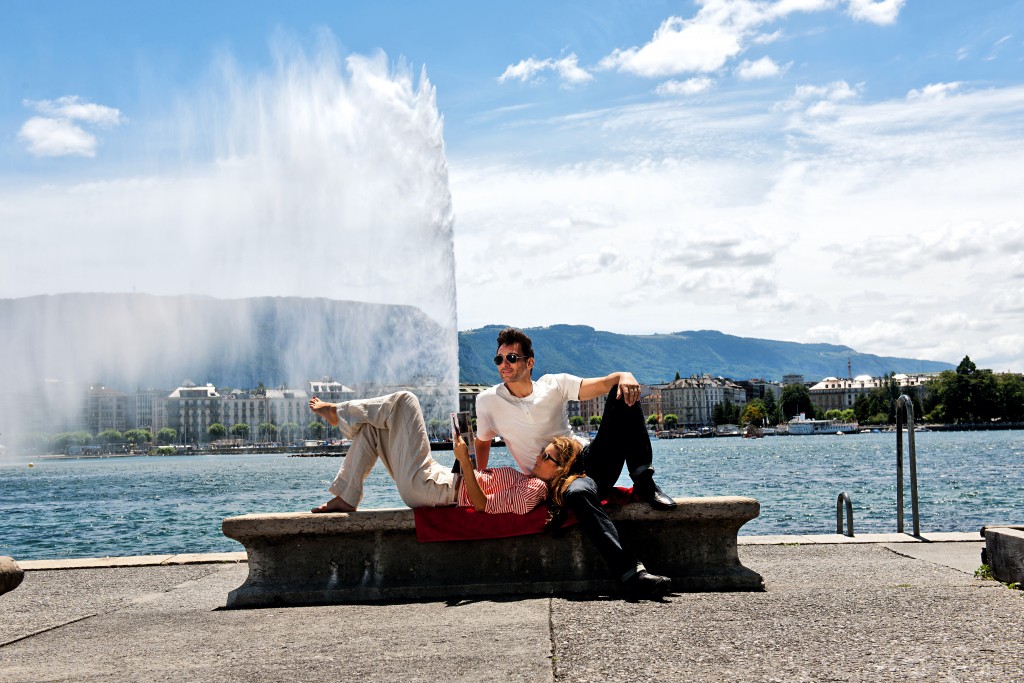 Then hop the train, and in less than an hour you’ll be in picturesque Lausanne, the second largest city on Lake Geneva and home to the Olympic Museum, dedicated to the history of the Olympics from ancient times to today. The old city has medieval, shop-lined streets, the 12th century Lausanne Cathedral with an ornate facade that attracts 400,000 yearly, and the 19th century Palais de Rumine, housing fine art and science museums.

The last stop for your group on Lake Geneva is the resort town of Montreux, another quick ride by train, on the eastern shore of the lake. With a Mediterranean type of climate, Montreux is surrounded by vineyards and across the water are the snow-covered Alps. A long, flower-bordered promenade on the lake is an attractive walk. Chillon Castle, with fortified walls and towers is the most visited historical structure in Switzerland and a must-see. Many festivals take place in Montreux. 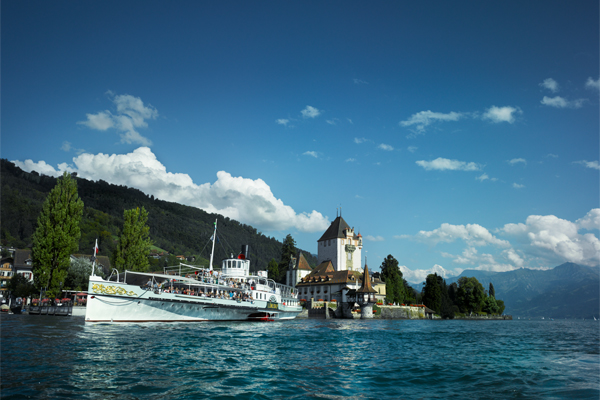 The Golden Pass line will then whisk your group to downtown bustling Lucerne, with its legendary Water Tower and Chapel Bridge from the 14th century. Historic houses decorated with frescoes line the picturesque town squares as they do the Weinmarkt square in the car-free Old Town.You’ll find other Lucerne attractions, as well, like the Musegg Wall and Lion Monument. While there, your group can take a refreshing cruise on Lake Lucerne, visit the Swiss Transportation Museum or go to the top of Mt. Pilatus on the steepest cogwheel railway in the world at a 48% gradient. 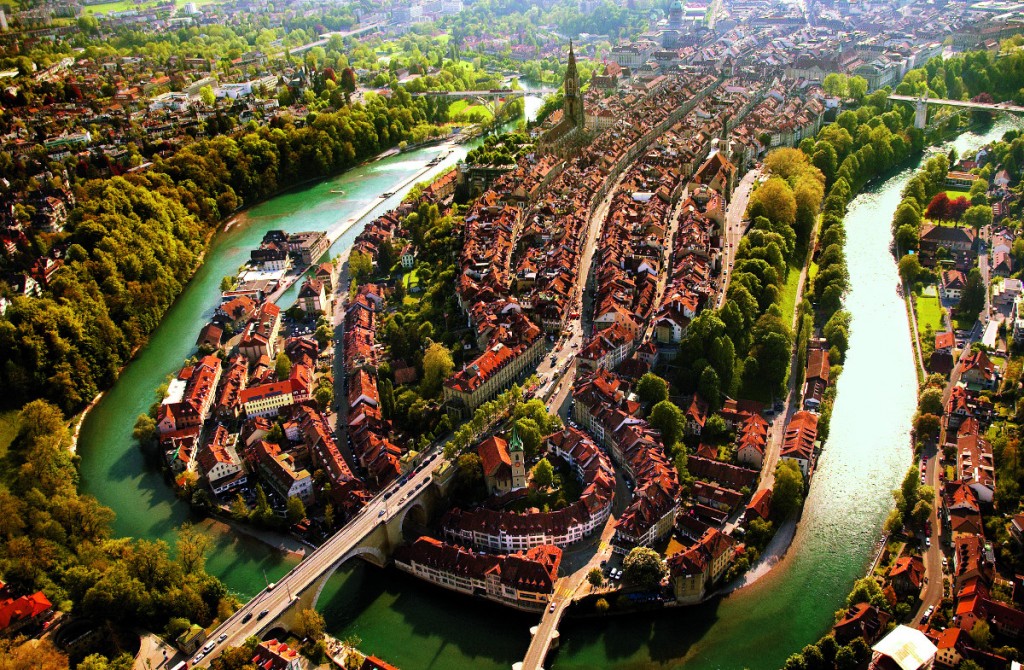 After Lucerne, your party can depart on one of the numerous Swiss trains over the Brunning Pass to Interlaken, which lies in the Bernese Oberland between Lake Thun and Lake Brienz. The vacation destination, which is presided over by the three mighty mountains— Eiger, Mönch and Jungfrau— is the starting point for numerous activities. By the beginning of the 19th century Interlaken was already renowned for its impressive mountain scenery, and its success as a tourist and convention destination is well-known. The Interlaken region also has more than 45 mountain railways, cable cars, chair and ski lifts that lead to numerous mountaintops and a dense network of hiking trails.

Again on the train, it’s off to Switzerland’s capital city, Bern, under an hour away from Interlaken. Bern’s Old Town is a UNESCO World Heritage Site and features three miles of arcades. The locals refer to them as Lauben, and together they form one of the longest weather-sheltered shopping promenades in Europe.

The center of Bern is surrounded by the popular Aare River, and the town itself has many fountains, sandstone facades, narrow cobblestone streets and historic towers. Groups will want to visit the Rose Garden above Bear Park and the platform of the 330-foot-high cathedral tower for the best views of the Old Town. Boutiques, bars and cabaret stages in the Old Town, some located in vaulted cellars, and small street cafes, attract locals as well as tourists. 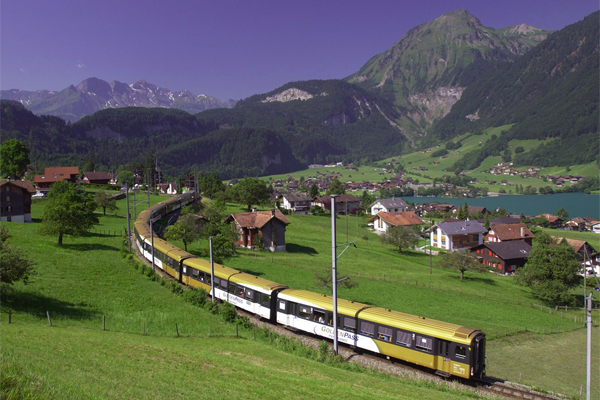 The last stop on our suggested group journey is Zurich, which is a quick hour and a half train trip from Bern. In Zurich during the summer months, start off with either a 90-minute roundtrip cruise on Lake Zurich or up to a four-hour roundtrip excursion to Rapperswil. During winter months, the timetable includes two short roundtrips, as well as a long roundtrip.

Then head up to the nearby Uetliberg, which is reached by train. This nearly 3,000-foot-high mountain offers panoramic views of the city and the lake. While in Zurich, visit the Fraumünster Church and Grossmünster Cathedral, as well as the many colorful guild houses.

The Swiss Travel System’s Grand Train Tour offers this and many more of Switzerland’s best itineraries for your group to discover. For more information, go to SwissTravelSystem.com/grandtraintour.