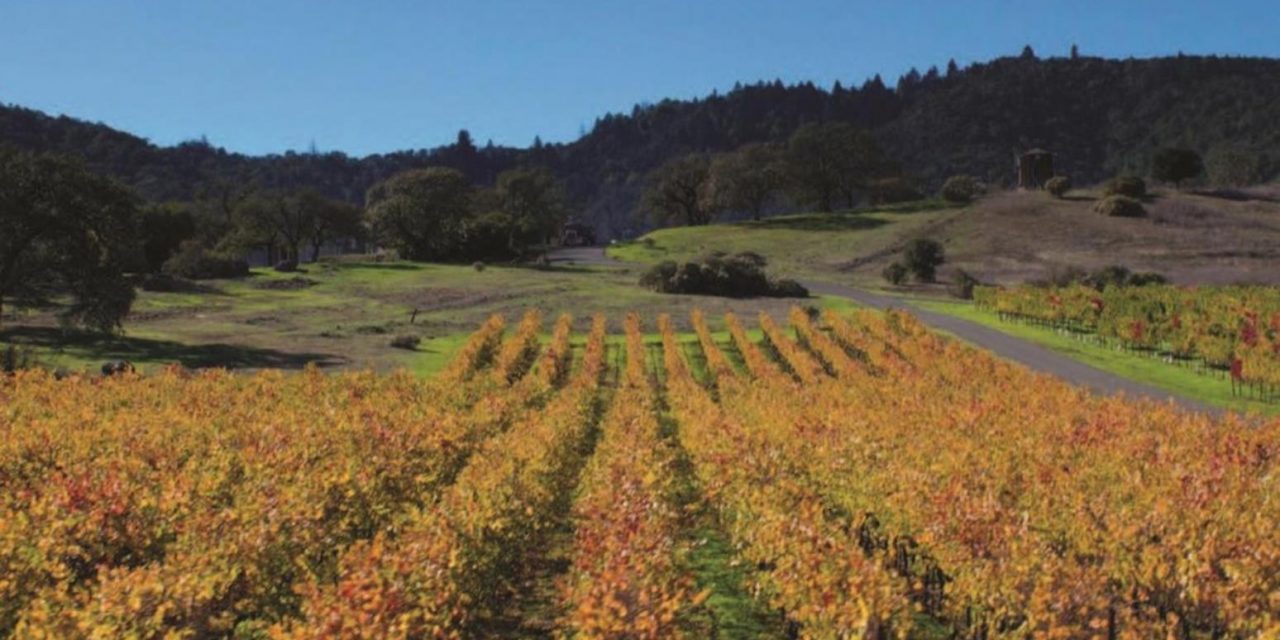 Everyone knows about California’s wine country and the iconic wineries in the Napa Valley and nearby Sonoma County. And certainly most visitors to the area are going to be interested in touring some of these wineries to see how they turn grapes into a product that sells for $40 a quart. But there are other options as well, from Michelin-star restaurants, bountiful markets and fancy spas to train rides, balloon flights and bike trips.

Getting around the Napa Valley is easy. There are two major north-south highways going through the valley, the Silverado Trail and Route 29. 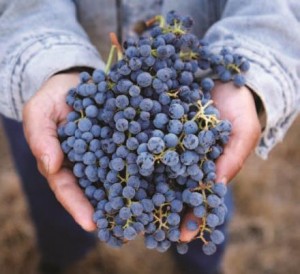 Visits to valley wineries give tour members close-up looks at the fruit of the vine and tastings of the end product.

Let’s travel through the major towns of the Napa Valley, starting in the north at Calistoga and working south through St. Helena, Yountville and Napa to the Carneros region. Each town has good hotels, excellent restaurants and notable wineries. All but Yountville have weekly farmer’s markets from May to October.

Calistoga was home to several Native American villages, drawn by the healing powers of the local hot springs. By the mid-1800s a spa resort was built and the completion of the Napa Valley Railroad allowed passengers to ferry from San Francisco and then train to Calistoga. Later a local soda fountain owner was drilling for a water well and struck sparkling water. He opened a bottling line and Calistoga Sparkling Water was begun. Also nearby is the Old Faithful of California geyser.

The town today retains a Victorian aura with historic buildings, two-lane roads and no fast-food restaurants. It was cited by the National Trust as a Distinctive Destination. The cooler hillsides produce good zinfandel and chardonnay. Local wineries include Sterling, Schramsberg and Chateau Montelena, known for winning a famous Paris wine tasting and depicted in the movie Bottle Shock. Notable high-end spa resorts include Solage Calistoga and the Calistoga Ranch. A charming in-town property is the Mount View Inn, located on Lincoln Avenue, as are virtually all the restaurants.

St. Helena has a short two-block downtown area that is one of the most picturesque anywhere and contains one-of-a-kind tourist shops and restaurants. Top wineries include Duckhorn, Charles Krug and Joseph Phelps. Resorts include the Harvest Inn, Auberge du Soleil in nearby Rutherford and Meadowood, where the restaurant has three Michelin stars.  Favorite restaurants in St. Helena include Cindy’s Backstreet Kitchen by Cindy Pawlcyn, who also has Mustards Grill in Yountville, and Terra.  Greystone Restaurant is operated by the Culinary Institute of America and staffed largely by culinary students perfecting their craft under the supervision of experienced chefs.

Yountville is a unique small town. Although its population is less than 3,000, the town boasts three Michelin-star restaurants, making it the culinary capital of wine country; arguably, it’s home to the greatest concentration of fine restaurants in the world. The first winery was built here in 1874 and operated until 1955. It is now V Marketplace, which holds shops, the Napa Style wine bar and celebrity chef Michael Chiarello’s Bottega restaurant.  The top accommodations choice is the eco-conscious Bardessono Inn and Spa right across the street. Other hotel options range from the fabulous Hotel Yountville, North Block Hotel and Vintage Inn to a variety of inns and B&Bs.

The restaurant that really put Yountville on the map is Thomas Keller’s French Laundry, where the menu changes every day and offers a staggering number of small items. It is always rated one of the best restaurants in the world. Keller has his own herb and vegetable garden. He also operates the more casual Bouchon Bistro, Ad Hoc (designed to be for locals) and Bouchon Bakery (pastries and sandwiches). Domaine Chandon winery’s etoile restaurant and Richard Reddington’s Redd also are world-renowned. Bistro Jeanty, Redd Wood and Hurley’s would be top restaurants anywhere else. 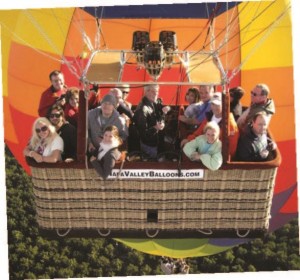 The Rutherford and Oakville wine regions, between Yountville and Napa, are home to Caymus, Opus One, Inglenook, Plumpjack, Silver Oak, Cakebread and Robert Mondavi. The Oakville Grocery is a historic site where you can purchase whatever you need for your picnic lunch. You can even enjoy it at the picnic area out back. Inglenook is owned by Francis Ford Coppola and is the site of his home and a boutique winery. Coppola recently completed his purchase of the land that comprised the old Inglenook winery and here you can tour the winery as well as visit the museum that tells the story of winemaking, history of Inglenook and history of cinema. Far Niente Winery includes not only a winery tour but visits to its 13 acres of gardens and collection of classic cars and motorcycles.

The city of Napa, at the south end of the valley, is its commercial center. There aren’t a lot of wineries here, with the notable exceptions of Domaine Carneros and Michael Mondavi Family Estate. However, there are roughly 20 wine-tasting rooms where you can savor the vintages from a group of wineries. A Downtown Napa Wine Tasting Card offers tastings at 12 of them for 10 cents each. At the Oxbow Public Market you can taste wine, watch cooking demonstrations, and purchase artisanal cheeses, charcuterie and bread. Or grab some seafood or pizza and enjoy it on the plaza overlooking the river. There are many shops downtown, which stretches east to the river. Along the way you’ll see Napa Artwalk, a rotating temporary series of sculptures based on a theme that changes every two years.

Accommodations in Napa include the Westin Verasa, Andaz Napa, Napa River Inn, River Terrace, Meritage Resort and the Silverado Resort, located east of town in a secluded golf course community. Notable B&Bs include the Beazley House and the Inn on First. Napa also has some great restaurants. La Toque has a Michelin star and Iron Chef Masaharu Morimoto has Morimoto Restaurant here. Other great picks are Celadon, Fish Story and Hog Island Oysters at the Oxbow Market (with oysters from its own farm on the coast). 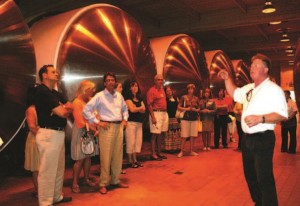 The Napa area is easy to tour by bicycle. Napa Valley Bike Tours offers self-guided bike tours on current-year Specialized bikes where you set your own itinerary. They also offer two full-day guided rides, each of which visits three or four wineries in between rides of two to four miles each. One follows roads and the other goes off-road at times to ride through the vineyards. Either way they bring you a picnic lunch and pick up your wine purchases along the way. (napavalleybiketours.com)

Another option is the Napa Valley Wine Train, a scenic ride through the heart of Napa Valley. Each ride is three hours roundtrip and you have a choice of going for lunch or dinner. There are three price levels, which determine your car and your menu and beverage choices. You can choose to just ride the train roundtrip or book a lunch with winery visit and return on the train or motorcoach. (napavalleywinetrain.com)

For something out of the ordinary, try a hot-air balloon ride with Napa Valley Balloons. The winds are the calmest and coolest at sunrise, so the trip starts very early. You start with a pre-dawn arrival for coffee, juice and pastry. Then you board in a group of 6-16 depending on the basket size. There is no sense of motion as you float with the winds up to 2,000 feet for about an hour. Your pilot points out landmarks and scenic highlights between the mountain ranges. After landing you finish the trip with full breakfast and sparkling wines at Domaine Chandon Winery’s Michelin-star etoile restaurant. (napavalleyballoons.com)

For more information on California’s Napa Valley, go to visitnapavalley.com.