Cruise lines have embraced “bringing land to sea” with diverse dining, options and high level entertainment. But an area that’s lagged behind? Slow Internet speed and connectivity issues frustrate guests who want to stay connected while they’re sailing, not just with the traditional Internet café but with their smart phones and mobile devises. That’s finally changing. Parent company of Royal Caribbean International, Royal Caribbean Cruises Ltd.’s major technology investment and launch of a new satellite network, first piloted on Oasis of the Seas in December 2013, and now onboard Allure of the Seas, is expanding. Yes, high speed on the high seas is finally here. 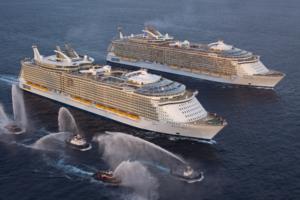 Oasis of he Seas and Allure of the Seas

The reason for slower Internet and connectivity issues goes back to the old technology that was being used. When guests would go online, they would be sending “packets of information” from that ship to a stationary satellite located some 23,000 miles above the Earth. Then that “packet of information’ had to go from a ground station and back up to a satellite, which took more time. This is why the delays and connectivity issues happened while trying to use Internet onboard ships. 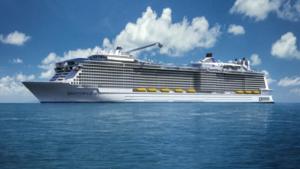 Quantum of the Seas will feature O3b fiber-like Internet service

The O3b fiber-like Internet service was first piloted on Oasis of the Seas in December 2013 and has also been since introduced on Allure of the Seas. The new system will also be on their upcoming new ship Quantum of the Seas, set to debut this fall.

Royal Caribbean Cruises Ltd. has also been collaborating with Harris CapRock, a leading global provider of managed communications solutions. Earlier this year the Harris CapRock communications solution was installed on all the ships within Royal Caribbean International, Celebrity Cruises and Azamara Club Cruises. The communications on ships with Harris CapRock is already many times faster than what it used to be with their former vendor. For those ships that will have O3b installed, it will push the bandwidth for their cruise guests and open up many of the applications that they’re used to enjoying on land.

With Harris CapRock being deployed across Royal Caribbean International’s fleet, this is changing the types of packages being offered. Royal Caribbean International has also been working on deploying onboard communications management software to offer their guests resort-style, all-you-can-use bandwidth packages by hour, day and week. Oasis of the Seas, Allure of the Seas and Navigator of the Seas already offer this. 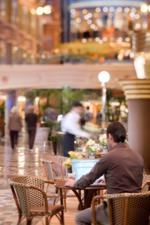 Royal Caribbean International is now testing a variety of pricing. While the prices are highly subject to change, the current pricing offers guests $29.95 per hour, $99.95 per day, and $189.95 for unlimited usage on a 7-night cruise for one device.

The shift away from the traditional Internet Café

Once a mainstay, the formal Internet café onboard Royal Caribbean’s ships has also been going through a transformation. Starting with their “Oasis” class ships, Royal Caribbean did a shift. With the bow to stern WiFi service onboard, guests can easily use their own mobile devises and laptops onboard. So the actual Internet Café is located in an interior stateroom with three desktops. Guests primarily use this to register or buy their Internet packages, which they can also do on their in-stateroom TV.

New Options for your group to stay connected 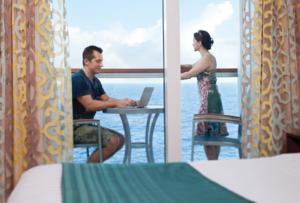 With the technology that parent company Royal Caribbean Cruises Ltd. has invested in, yes, your group members will be able to stay connected in new ways while sailing onboard Royal Caribbean International. And they can more easily use their own mobile devises and laptops, with added flexibility. Overall, it provides another option to consider besides using an Internet Café or finding free WiFi hotspots while in port.