Row NYC Puts Groups in the Thick of Things 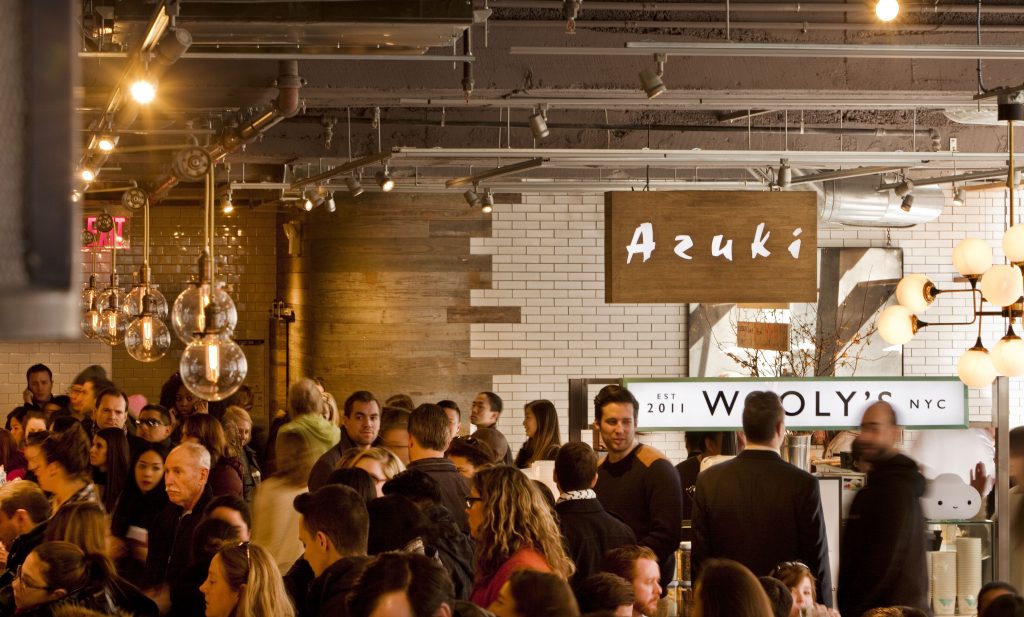 With Broadway theaters just out the door and the frenzy of Times Square a block away, the Row NYC hotel mirrors all the energy and electricity of this round-the-clock entertainment magnet in midtown Manhattan. It’s the perfect choice for tour groups looking to be in the heart of the action.

Many tour planners may not be familiar with the name of this ideally situated hotel at the corner of Eighth Avenue and West 44th Street, but its most recent name, the Milford Plaza, may ring a bell. The 28-floor building, dating back to the 1920s, was totally transformed a few years ago and today buzzes with a youthful vibe and dazzles with bright colors.

Lighted photo murals in the corridors depict New York City street scenes. When I got off the eighth-floor elevator, I was confronted with a tableau of storefronts and brownstones from a New York neighborhood. The wall behind the beds in my room was hot orange. From the outside, the hotel may look plain, but inside it absolutely rocks. 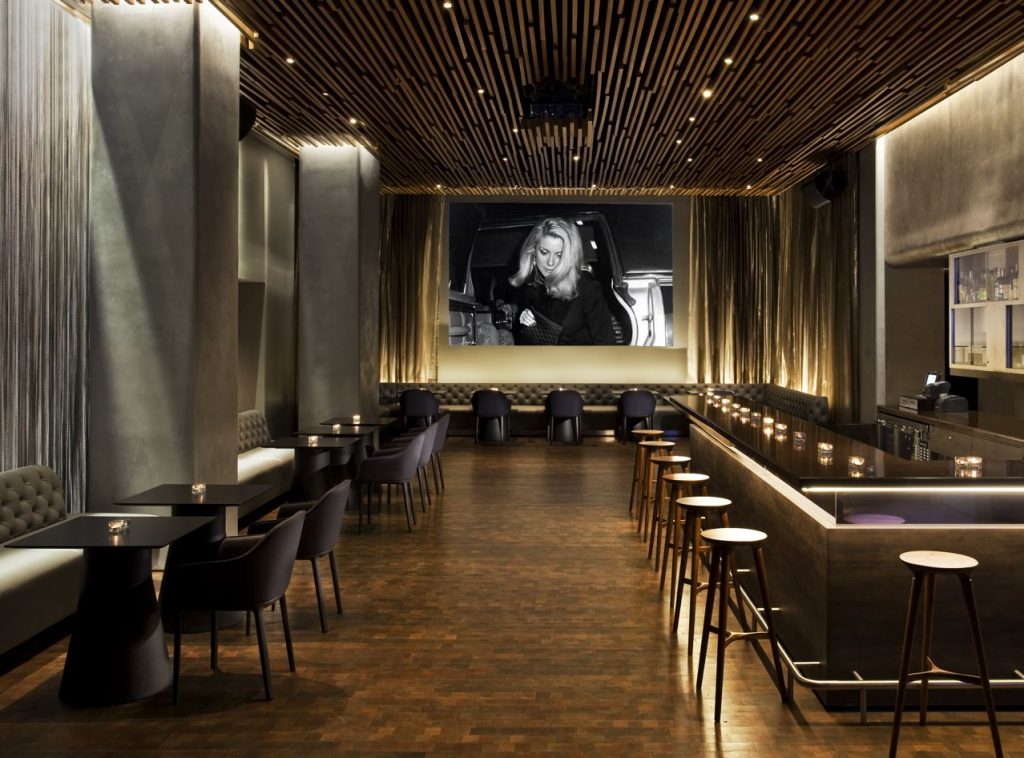 Row NYC’s cool District M is a breakfast spot by day, a cocktail lounge with live music by night.

Guest rooms are small and so are the bathrooms, but furnishings and fixtures are totally up-to-date. Amenities in the 1,331 contemporary rooms include a 32-inch flat-screen TV, iron and ironing board, hair dryer, multi-setting shower head, and a work desk with an ergonomic chair. After settling into my room, I looked out the window and saw one of my favorite New York pizza places, John’s Pizzeria, which occupies a former church. It sits next to the St. James Theatre, where the smash musical Something Rotten! is now playing, with long-running The Phantom of the Opera in the Majestic Theatre across the street, adjacent to Row NYC. Despite all the activity below, my room was quiet. I slept well, never bothered by noise, thanks to double-pane windows.

This independent, mid-range hotel may not be in the luxury category, but just being steps from the lights of Broadway is a luxury in itself. To me and tourists from around the world, Times Square is the epicenter of New York City. I can’t imagine a better base of operations than Row NYC.

Another convenient plus: Times Square’s first indoor food market is located inside Row NYC. At City Kitchen, a collection of seven fast-serve eateries, top restaurateurs from city neighborhoods, from Brooklyn to the Upper West Side, dish up their specialties. Everything is fresh, tasty and high quality, the service fast and friendly. 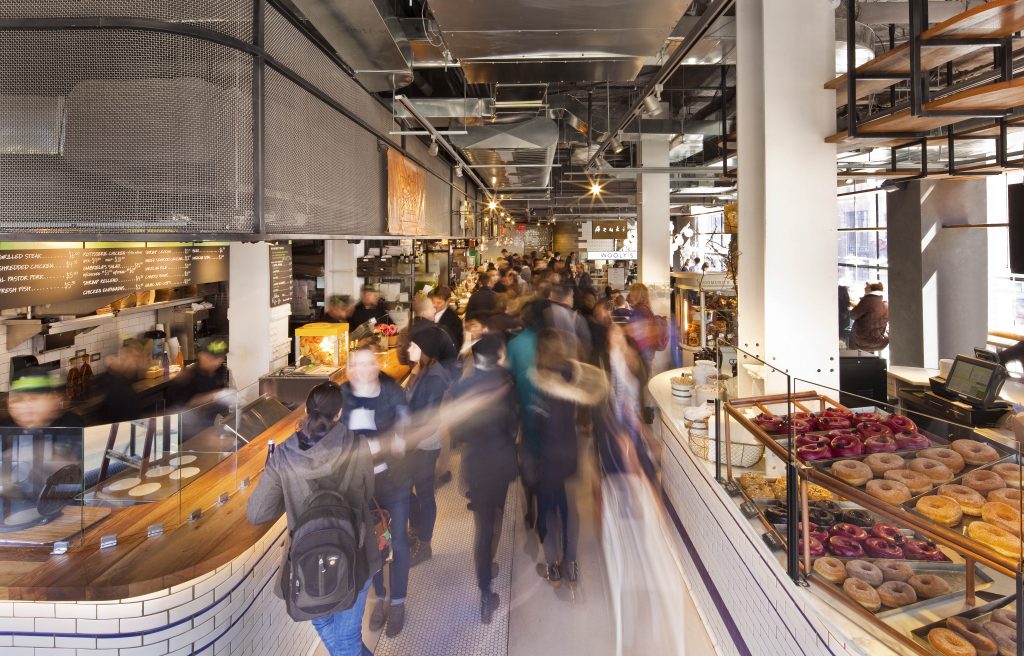 City Kitchen, a gourmet food market in Row NYC, serves up everything from tacos to donuts.

At Whitmans, famous for its burgers, I tried the peanut butter and bacon burger. It was so good that now I want to make one at home. Blue cheese fries made the perfect accompaniment. Whitmans also offers a bacon, egg and cheese burger, green chile burger and cheesesteaks.

One morning at City Kitchen, I got my day off to a perfect start with a luscious egg and smoked bacon burrito from Gabriela’s Taqueria, a Mexican eatery known for its fish taco. Other menu items include empanadas and quesadillas. Another day I drooled over the jumbo cake donuts at Dough before finally settling on the Nutella-filled variety. But the dulce de leche, cafe au lait and salted chocolate caramel also were tempting, and the passion fruit with chocolate nibs sounded like a winner, too.

Fans of Mediterranean cuisine love the spiced chicken, lamb and roast duck pita wraps and falafel (Korean- and Beirut-style) at the City Kitchen location of Illili Box, an outpost of the Lebanese favorite in Madison Square Park. You can wash it all down with craft beer from Lebanon.

The rahmen noodle bowls and pork buns at Kuro-Obi are to die for, while Azuki has all the right stuff for connoisseurs of sushi and sashimi. Luke’s serves up lobster rolls, New England clam chowder and lobster bisque. 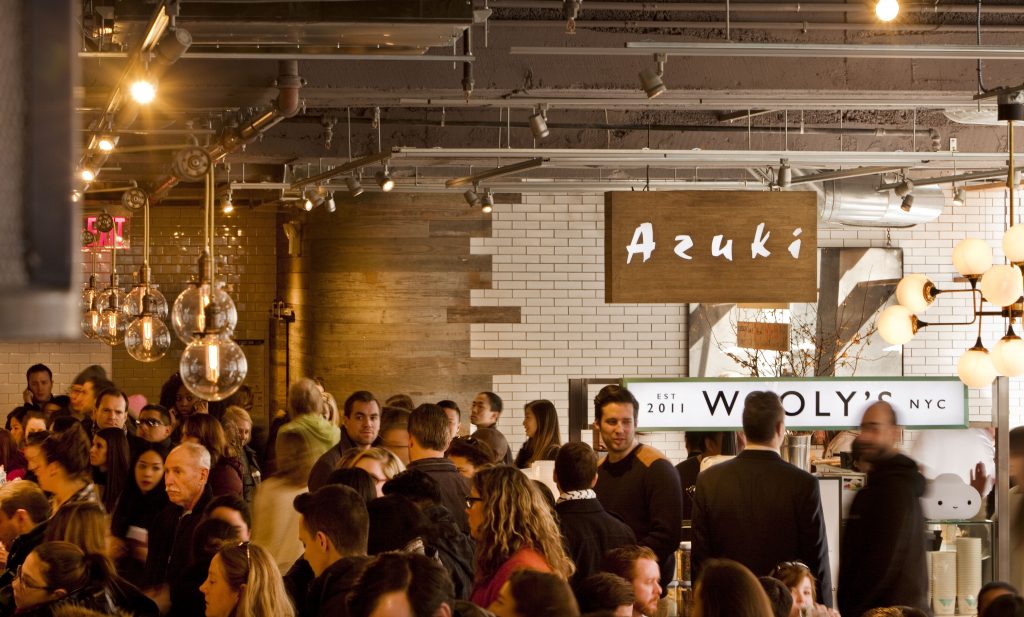 City Kitchen is open for breakfast, lunch and dinner. For the best in sushi or sashimi, try Azuki.

The focal points of Row NYC’s bustling lobby are the Internet Lounge and District M, a cocktail lounge that serves breakfast pastries from some of New York’s finest bakeries. Later in the day it transforms into a bar with live music and a selection of charcuterie, cheese and hand-stretched Neapolitan pizzas from Greenwich Village’s famed Murray’s Cheese Shop. Watch the game on the monstrous television screen that takes up a whole wall, either from inside the bar or the stepped seating out in the lobby. In the evening a digital art gallery by paparazzo extraordinaire Ron Gallela captures the heyday of New York City during the late 1970s and early ’80s with photographs of people like Jackie Onassis, Mick Jagger and John Lennon.

Also in Row NYC, just beneath City Kitchen, are Cyc Fitness, an indoor cycling studio, and Glam&Go, an express hairstyling bar. The hotel has a fitness studio open 24/7 for guests.